Jamie Dixon, who reached 11 NCAA tournaments in 13 seasons as Pittsburgh’s head coach, was run out of town after the 2015-16 season because he wasn’t good enough.

That’s what happens when you take a historically-downtrodden basketball program and win big for a few seasons. Missing two NCAA tournaments in a five season stretch becomes a fireable offense.

Since Pitt ran off Dixon, the Panthers have had their come-to-Jesus moment, ending the Kevin Stallings-era after just two years, one of which included a winless ACC season. Dixon, on the other hand, has landed in Fort Worth and turned TCU into a top 25 program.

The Horned Frogs won the NIT in Dixon’s first season at the helm, winning 24 games and finding themselves in the midst of the bubble picture in February before a seven-game losing streak to close the regular season ended those dreams. This past season, TCU was even better, as a four-game winning streak in late-February propelled Dixon to his first tournament appearance with his alma mater and TCU’s first trip to the Big Dance in 20 years.

To get an idea of the significance of what’s happening with this team right now, think about this: Since 1968, TCU has been to the NCAA tournament just four times (1971, 1987, 1998 and 2018). The last time that they reached the dance in back-to-back seasons was in 1952 and 1953. I, frankly, never thought I would see a time where TCU was the best team and, arguably, the healthiest basketball program in the state of Texas, but that’s where we are right now.

Because despite losing two starters from last year’s team, TCU looks like they should be better this year. 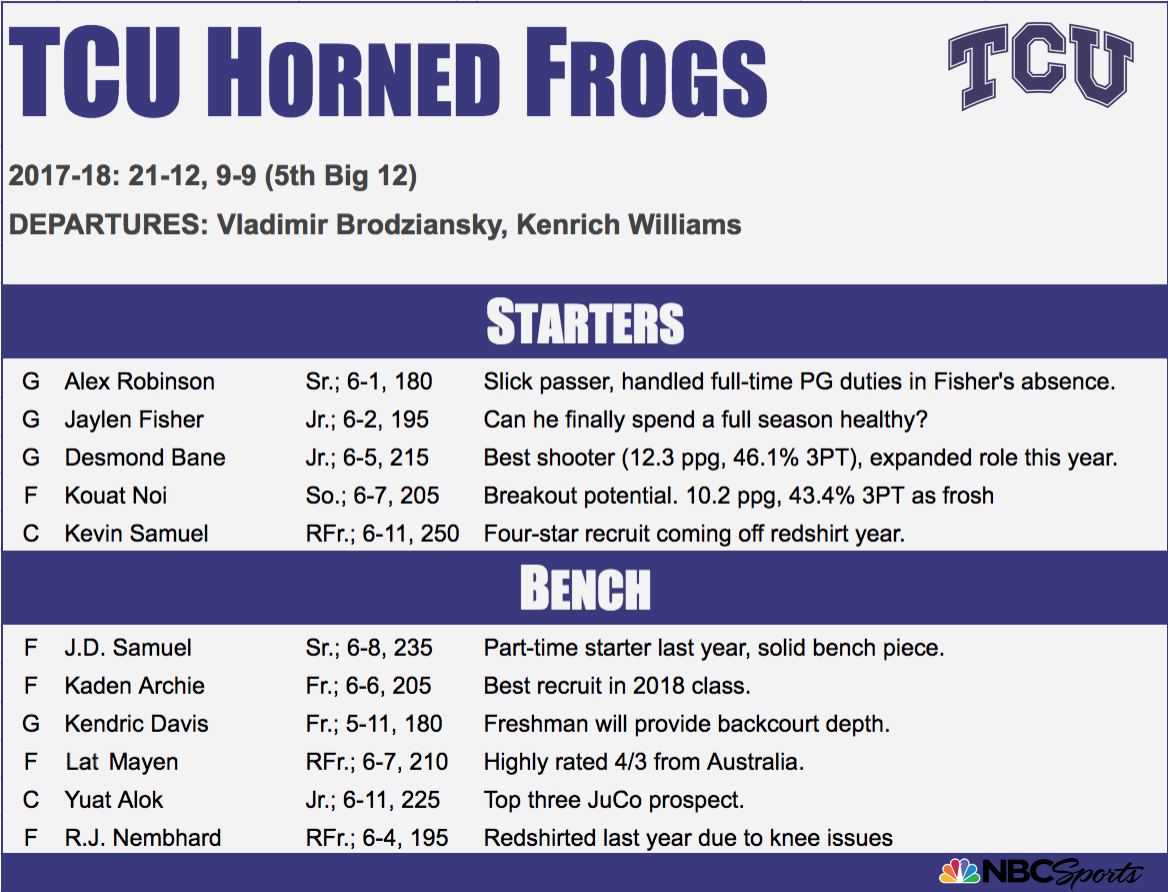 TCU WILL BE GOOD BECAUSE …

They are going to be able to score, I have little doubt of that.

Last season, despite missing Jaylen Fisher for half of the year, the Horned Frogs finished as the No. 9 team in KenPom’s adjusted offensive efficiency metric, and I think they are going to be better on that end of the floor this season.

For starters, they are going to be one of the growing number of programs that will be playing with two point guards this season, as Fisher will be joined in the backcourt by Alex Robinson. Those two compliment each other well. Robinson is a slick passer that really excels in ball-screens while Fisher is a bigger, more physical athlete that has shot 39.9 percent from three on more than 200 attempts through his first two seasons. Both players notched assist rates above 30 last year, which is a very good number; to put that into context, they both averaged more than 5.4 assists.

I’d hesitate to call TCU the best backcourt in the Big 12 this season, but they are never going to be at a disadvantage there this season.

And that’s before you factor in Desmond Bane and Kouat Noi. Bane is the best shooter in the program, making 46.1 percent of this triples last season while averaging 12.3 points. He’ll be asked to play something of a bigger role this year, as replacing Kenrich Williams is not going to be an easy thing to do, but I expect him to be up to the task. Noi is the x-factor here. As a freshman, he was an impact scorer off the bench, averaging 10.2 points in just over 22 minutes a night. He’s 6-foot-7 with some length, and he shot 43.4 percent from distance while attempting the most threes of anyone on the roster.

With those two point guards and those two shooters on the floor, TCU is going to be a nightmare to defend. Depth could be a bit of an issue, as TCU’s perimeter bench options are largely unproven, but people are the program are bullish on them. R.J. Nembhard is a redshirt freshman and former four-star recruit that saw some action last season before a knee injury forced him to redshirt. Kaden Archie is TCU’s top recruit this season, while another redshirt freshman — Lat Mayen, a 6-foot-8 native of Sudan by way of Australia — fits the mold of TCU’s roster to a T; he’s a combo-forward with three-point range that was considered the top prospect in Australia in his class.

Even if those newcomers struggle to adjust to the college level, it’s hard to imagine TCU finishing the season outside the top 15 offensively.

BUT TCU IS GOING TO STRUGGLE BECAUSE …

There are real doubts about how good they are going to be on the defensive end of the floor.

The Horned Frogs finished 100th in KenPom’s adjusted defensive efficiency metric last season, and while Pitt had a reputation for being one of the Big East’s tough, physical defensive monsters in the mid-2000s, that mostly faded away once Ben Howland’s recruits matriculated out of the program. Dixon has had just one team finish in the top 20 of KenPom’s adjusted defensive efficiency metric since 2007, and that was when his 2009 team finished 19th.

Not only did TCU struggle to get stops last season, but they will now be losing the guy that was one of their most important defenders in Kenrich Williams. He was the program’s best rebounder. He led the team in steals last season. He was switchable and physical and allowed TCU to be able to play four-around-one when he was on the floor because of his ability to deal with bigger defenders. Frankly, he was really underrated last season.

Bane probably isn’t big enough to fill that role. I’m not sure Noi or Mayen is physically ready for for a Big 12 battle in the paint. TCU does have an injection promising frontcourt talent coming into the program — specifically redshirt freshman Kevin Samuel and the nation’s top JuCo big man, Yuat Alok — but they will be replacing the now-graduated Vladimir Brodziansky. That should be an upgrade defensively at the very least, but it won’t necessarily make TCU a better than average team defensively.

To be clear, I don’t think they need to be Virginia. We’ve seen over and over throughout the years that, in the NCAA tournament, teams that are elite offensively and good enough defensively have more success than elite defenses that can struggle to score. But if TCU is trending towards finishing the 2018-19 season as a borderline top 100 defense, that probably isn’t “good enough”.

This is pretty obvious, I think: Jaylen Fisher’s health.

He also can barely find a way to stay healthy. A wrist injury cost him most of TCU’s NIT run when he was a freshman. A torn meniscus in his left knee suffered in August of 2017 cost him TCU’s summer trip to Australia and slowed the start to his sophomore campaign. He tore the meniscus in his right knee in January, ending his sophomore year midway through, and in early September he needed an arthroscopic procedure on the knee to clean some things up.

The hope is that Fisher is healthy by the time the season starts.

It should be noted that TCU has had success when he’s not on the floor. They won the NIT when he was out. They went 13-4 — with three overtime losses — in their 17 games after his injury last season. There are enough pieces here to make it work with or without Fisher.

But for TCU to hit their ceiling, to make a run at finishing second in the Big 12 this year, they are going to need Fisher healthy.

Hopefully, they get it.

TCU is going to be really good. There’s little doubt that they will finish in the top half of the Big 12 once again this season; there is a clear-cut top four in the league, and TCU is one of those four.

Frankly, 15th might be somewhat high for them. I doubt there are going to be many, if any, preseason top 25s that have the Horned Frogs higher, but I also doubt there is anyone that will call you crazy for projecting TCU to get to the second weekend of the NCAA tournament.

Personally, I think the upside is there for more.

If TCU can keep Fisher healthy throughout the season, and if they find a way to be able to consistently get stops, I think we’re looking at a team that has the horses to make a run to the Final Four. Those are two pretty big ‘ifs’, I know, but they are certainly within the range of outcomes for this group.

It should be a fun year in Fort Worth.