So here’s what happened.

I was bored on Monday night.

Bored, trapped in my house and wondering how in the world I was going to survive without college basketball and the NCAA tournament, so I decided to make one of my own.

Using the most recent bracket projection from our Dave Ommen to put together the field and something called NCAA Game Sim, I played out the entire NCAA tournament.

All the madness, all the upsets, everything that we are all missing right now.

Let’s dive into it.

Programming note: I’ll be posting the bracket as it looks after every single round. If you’re interested in who played well, the box score for every game is linked. 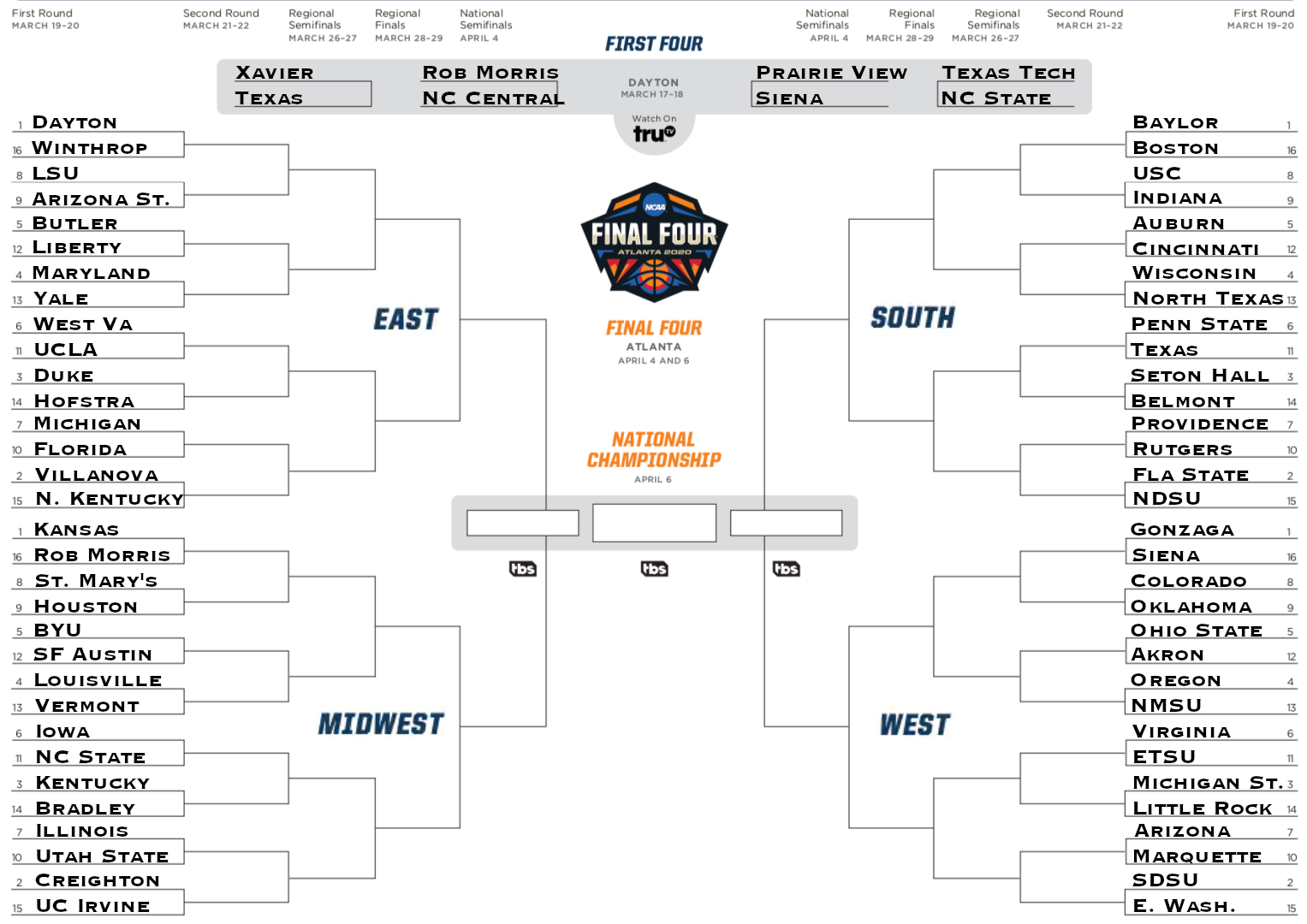 Things went pretty smoothly in the East Region on the first day of the tournament until the final game, when No. 15 seed Northern Kentucky added to Villanova’s long legacy of winning national titles or getting upset in the first weekend. Jalen Tate led the way with 16 points for the Norse.

The Midwest Region had all of the action in the first round, as three games were decided by a single possession. Vermont came within a missed Everett Duncan three of upsetting No. 4-seed Louisville while Creighton’s Denzel Mahoney hit a jumper at the buzzer to avoid becoming the second No. 2-seed to lose in the first round. Illinois and Utah State were decided by a single point, but that was thanks to a late Brody Miller three that did nothing but make sure that the Aggies covered the spread.

More upsets and more buzzer-beaters thanks to the South Region. No. 9-seed Indiana got to the second round of the tournament thanks to a game-winning bucker from Damezi Anderson while Thomas Bell his a shot to put No. 13-seed North Texas ahead of No. 4-seed Wisconsin. Brad Davison missed the would-be game-winner.

Nothing all that crazy happened in the West Region in the first round. Markus Howard scored 26 points to get the Golden Eagles past No. 7-seed Arizona in the opening round, but that was the biggest upset out west. 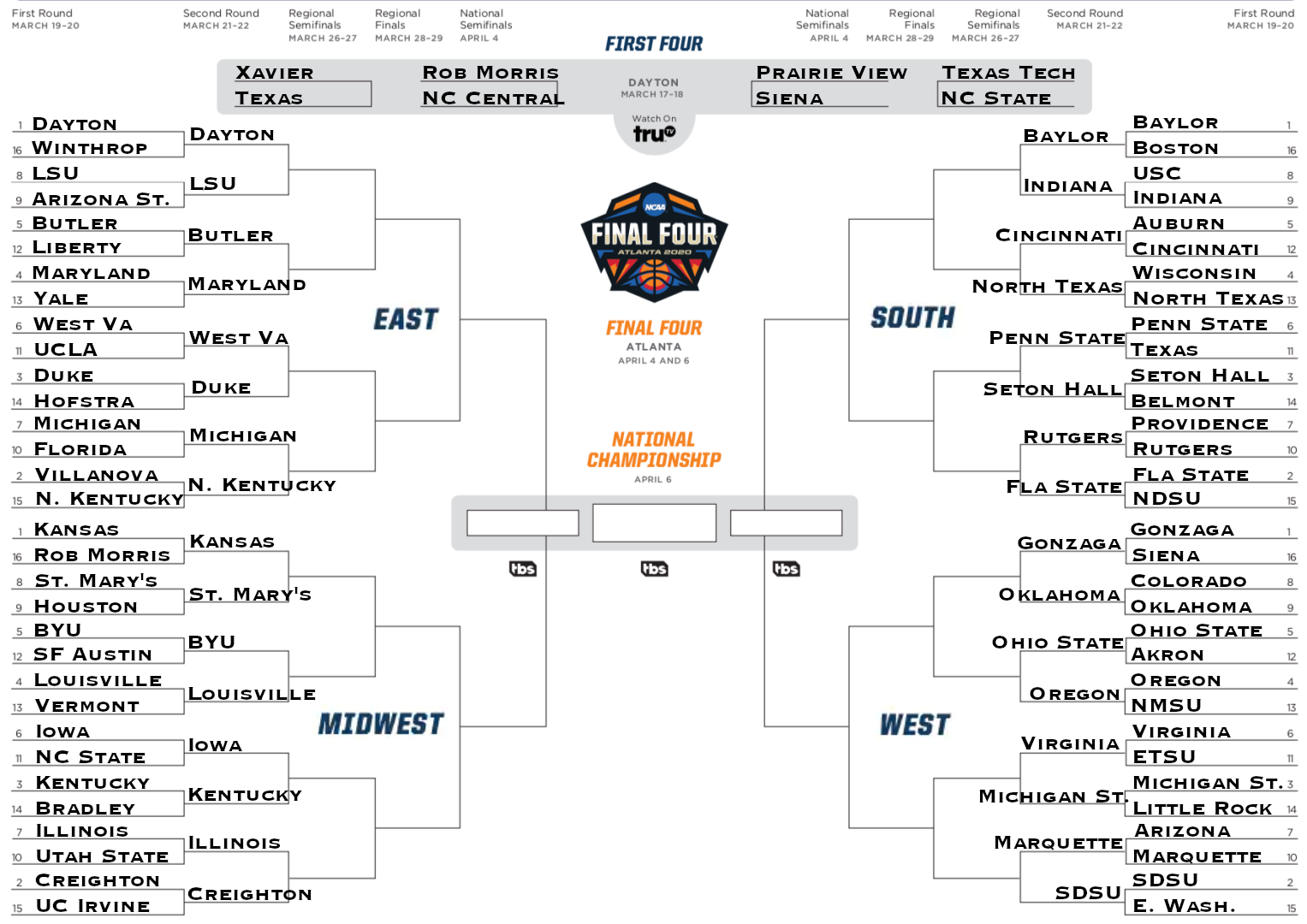 Dayton was the only top four seed to get to the second weekend in the East. The Flyers held off LSU, but things got weird elsewhere. Miles McBride scored 19 points to lead No. 6-seed West Virginia past No. 3-seed Duke while Bryce Nze’s 16 points and 10 boards were enough to get the Bulldogs past No. 4-seed Maryland.

Luka Garza and Joe Weiskamp combined for 45 points as the No. 6-seed Hawkeyes steamrolled No. 3-seed Kentucky in the second round, but they were bested by Ayo Dosunmu (22 points, six assists, six boards) and Kofi Cockburn (21 points, 16 boards) as they blew past No. 2-seed Creighton.

Cincinnati won the battle of the double-digit seeds to become the “Cinderella” No. 12-seed in the Sweet 16 while Penn State’s win over No. 3-seed Seton Hall ensured that there would be a Big Ten team in the Sweet 16 in each and every region.

Six Big Ten teams made it out of the first weekend in total after No. 5-seed Ohio State blew out Oregon and No. 3-seed Michigan State advanced past Virginia, but that was the most normal past of the West Region’s second round. Kristian Doolittle went for 30 points as No. 9-seed Oklahoma upset No. 1-seed Gonzaga and Markus Howard added 21 points as the Golden Eagles held Malachi Flynn to a 2-for-11 shooting performance in a win over the No. 2-seed, San Diego State. 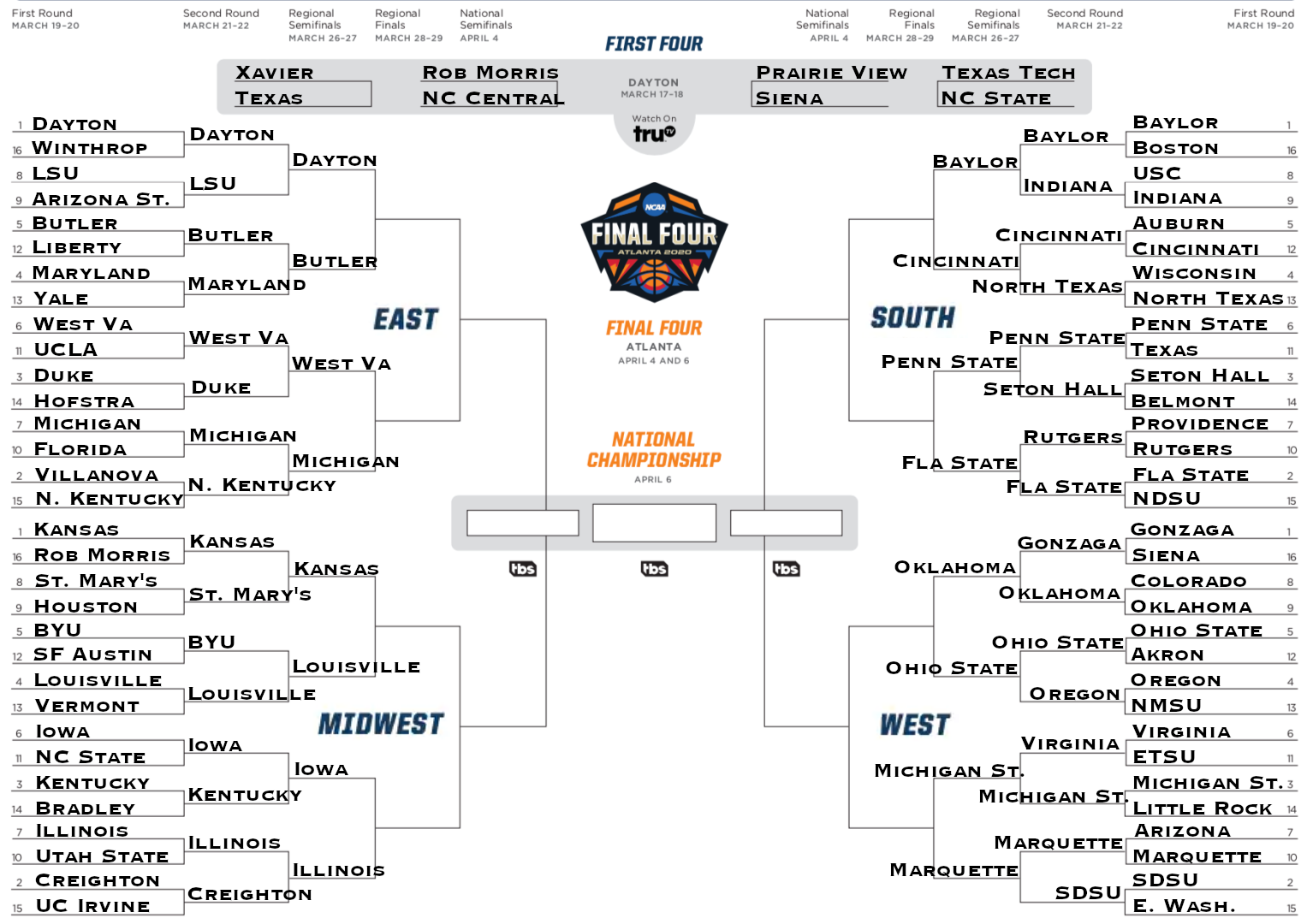 Eli Brooks, who averaged 19 points through the first two games of the tournament, was once again Michigan’s leading scorer with all of nine points as the Wolverines advanced to the Elite Eight with a win over West Virginia. On the other side of the bracket, Obi Toppin’s 17-point afternoon sent the Flyers to the Elite Eight over No. 5-seed Butler.

Devon Dotson continued his torrid tournament by putting up 23 points in a win over No. 4-seed Louisville. Ochai Agbaji added 19 points as Udoka Azubuike struggled with Louisville’s size. In a battle of Big Ten teams, Giorgi Bezhanishvili and Kofi Cockburn got the best of Luka Garza, holding him to eight points on 3-for-10 shooting as the Illini reached the Elite Eight.

Rocket Watts had 19 points to lead No. 3-seed Michigan State as Markus Howard outdueled Cassius Winston but still came up short as the Wolverines beat Marquette. Kristian Doolittle didn’t slow down a bit in the Sweet 16, going for 18 points as the No. 9-seed Sooners advanced to within a game of the Final Four. 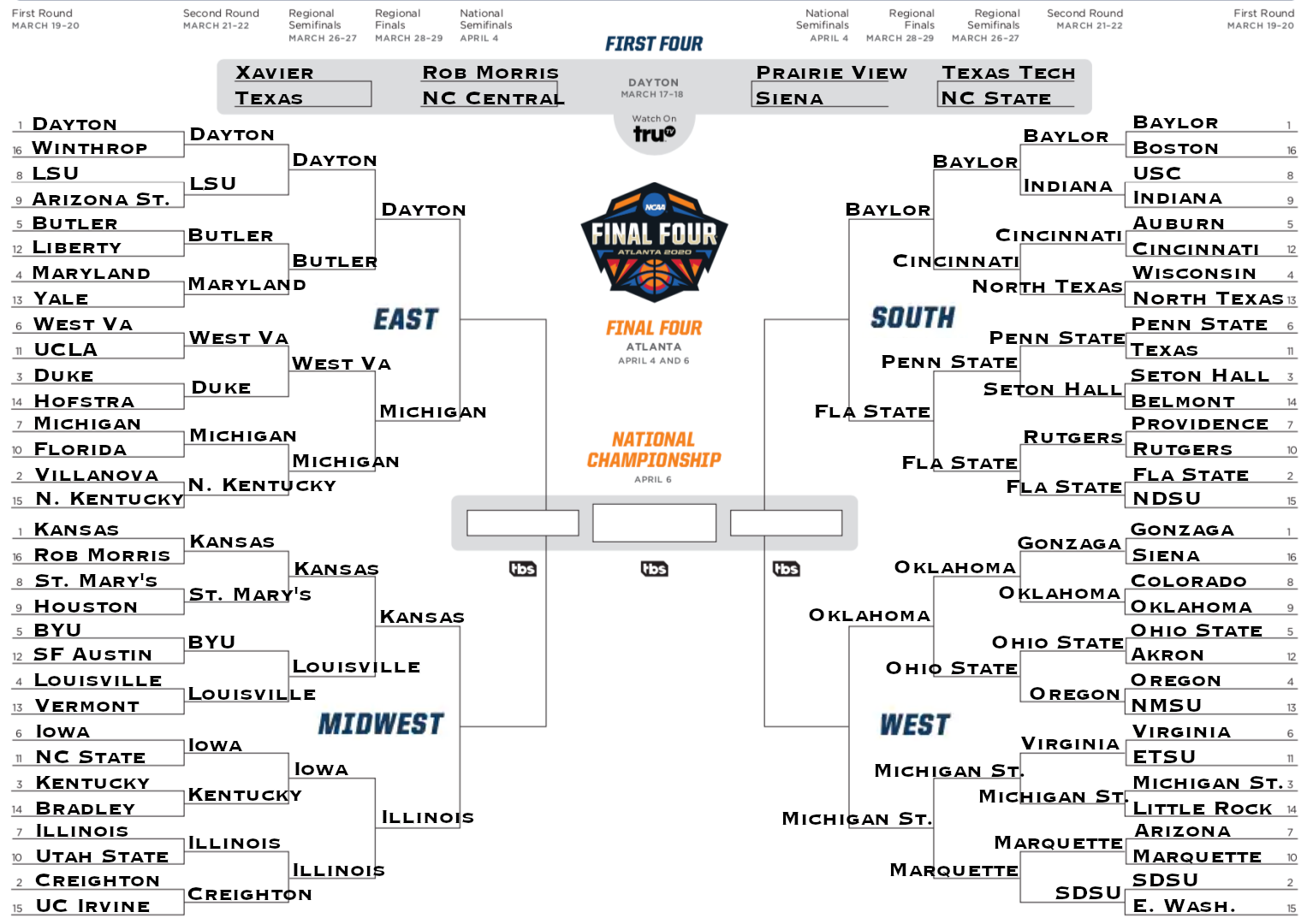 Isaiah Livers finished with 16 points, Zavier Simpson added 15 points and Franz Wagner went for 13 points and 12 boards as the Wolverines, the No. 7-seed in the East Region picked off No. 1-seed Dayton, ending a dream season for the Flyers.

Meanwhile, in the Midwest, Udoka Azubuike had his best game of the tournament to date, finishing with 14 points and eight boards as Bill Self beat his old program, No. 7-seed Illinois, to get back to the Final Four.

Baylor put four players in double-figures as they advanced to the Final Four for the first time in program history. Freddie Gillispie led the way with 12 points and 14 boards for the Bears.

And in the West, Brady Manek went for 27 points, but Xavier Tillman shut down Kristian Doolittle and Cassius Winston went for 21 points and five assists as the No. 3-seed Spartans got to the Final Four. 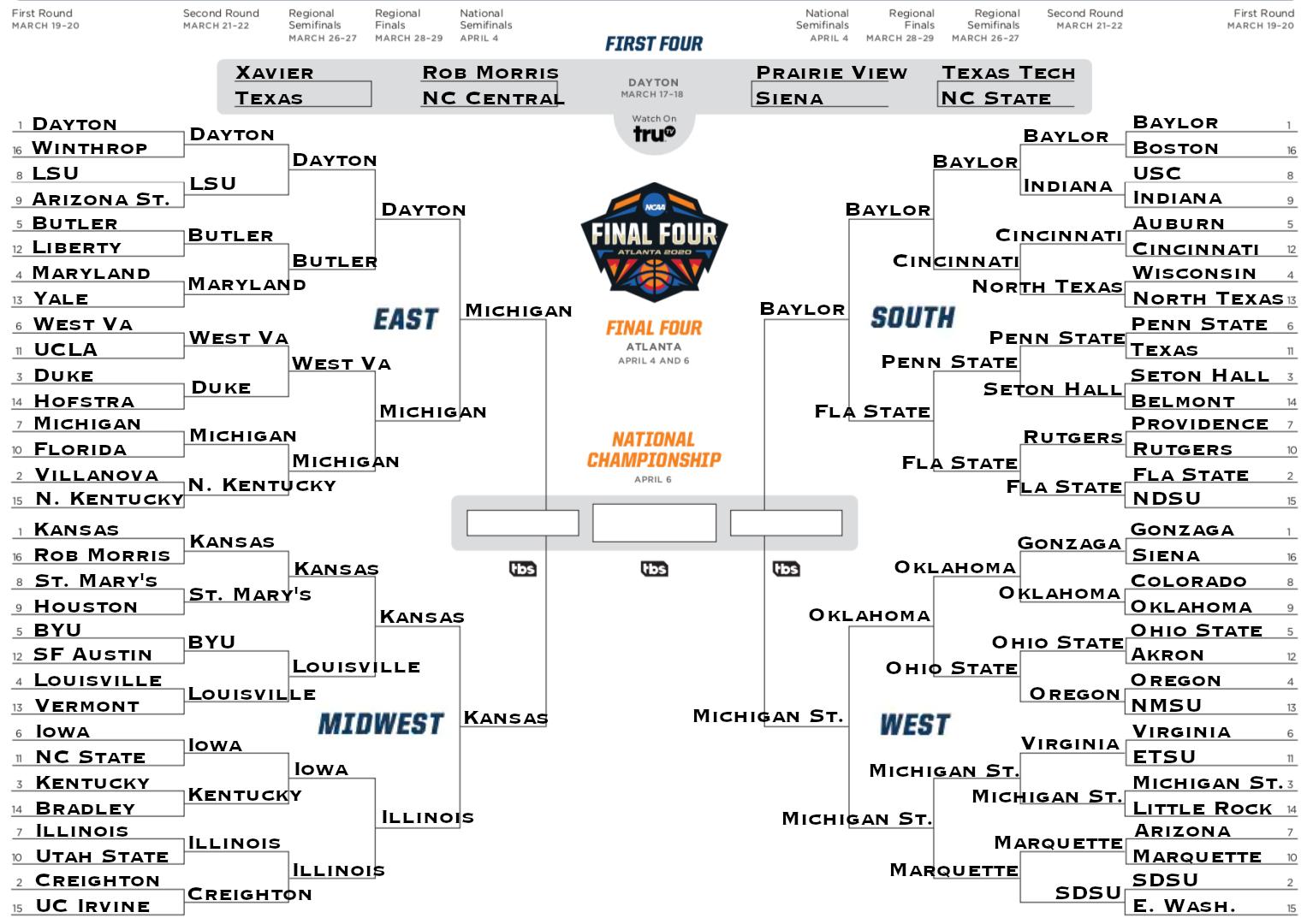 In the first game at the Final Four, Devon Dotson and Marcus Garrett combined for 32 points and eight assists as the No. 1-seed Jayhawks ended No. 7-seed Michigan’s dream season. It’s the third time Bill Self has been to a national title game.

Meanwhile on the other side of the bracket, we had a thriller. Michigan State blew a late seven-point lead but Freddie Gillispie missed the would-be game-winning shot at the buzzer. Cassius Winston had 16 points and nine assists in the win. 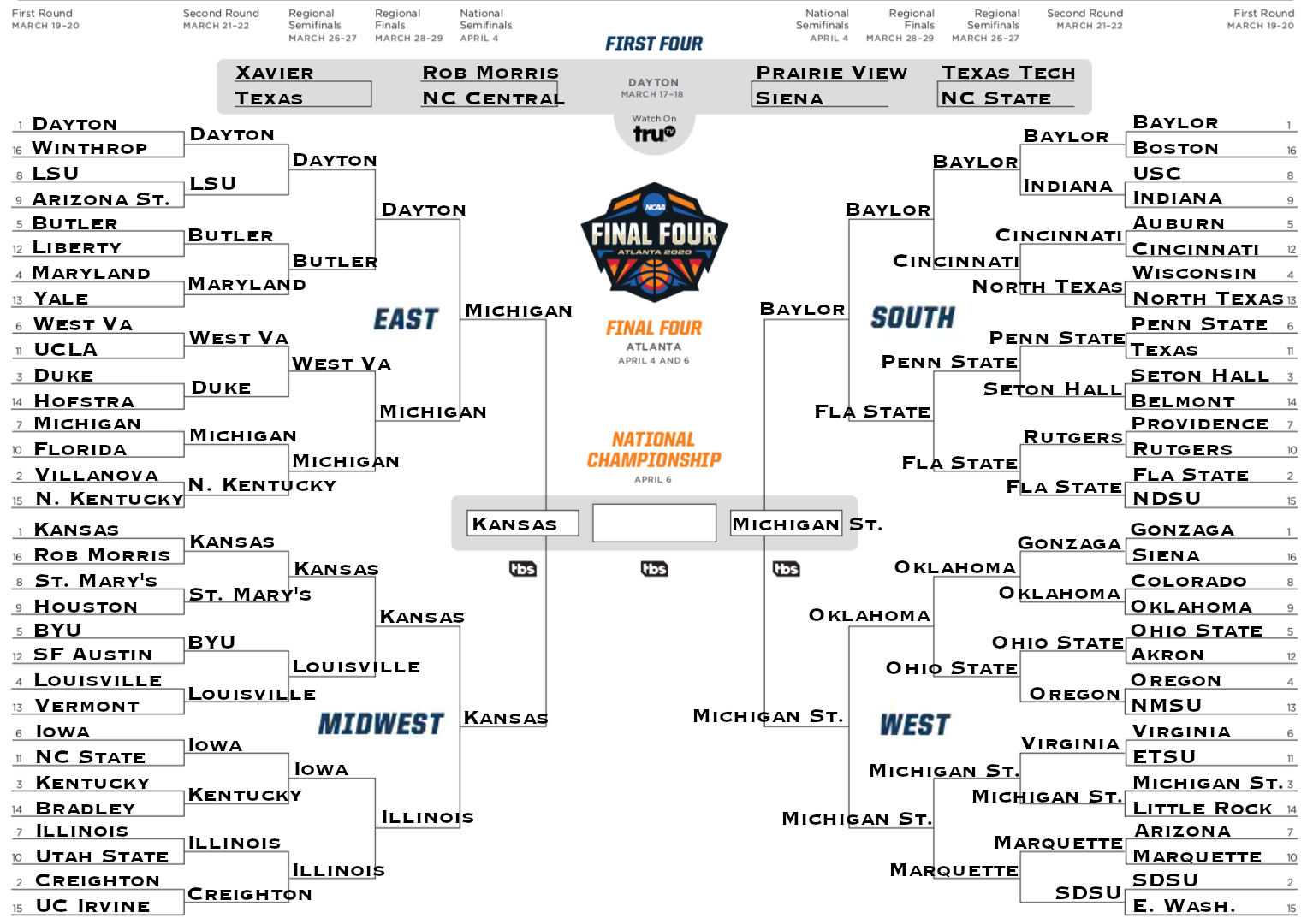 In what was billed as one of the most anticipated National Title games in recent memory, Devon Dotson ended up outplaying Cassius Winston — 21 points and five assists to 13 points and three assists — as the Jayhawks finished off a dream season. I hope they enjoyed it. This may be the last time that we’ll see them in postseason play for a long time.

So here it is.

The full, complete 2020 NCAA Tournament, with your national champions: The Kansas Jayhawks.

Here’s to hoping Snoop Dogg is invited to the parade. 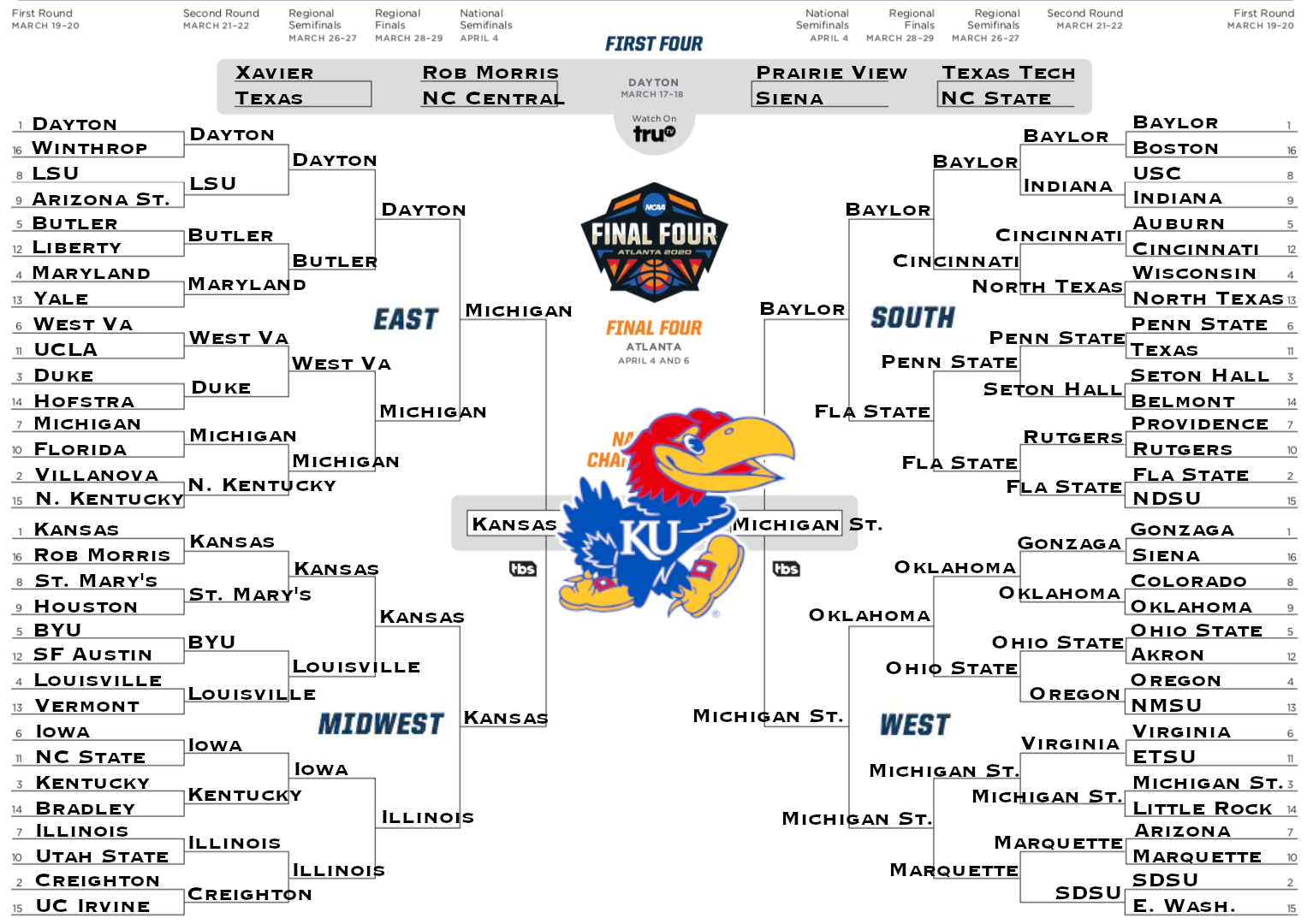