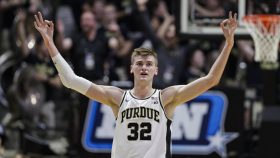 Less than a year after Bill Self’s Kansas program represented the United States at the World University Games and won the country’s first men’s basketball gold medal at the event since 2005, another Division I program announced that it will represent the nation at next year’s World University games.

This won’t be Painter’s first experience with USA Basketball, as he was an assistant on Jamie Dixon’s staff that led the U19 team to gold at the 2009 FIBA U19 World Championships in New Zealand. He was also head coach of the 2011 World University Games team, leading the United States to a fifth-place finish in Shenzhen, China.

Amongst the players on the current roster, rising sophomore forward Caleb Swanigan was a member of the United States U17 and U19 teams, winning gold at the 2014 FIBA U17 World Championships and the 2015 FIBA U19 World Championships.

Leading up to next year’s event it will also be interesting to see if Painter fills out his roster with a couple players from other programs. Last year’s World University Games roster had two non-Jayhawks, SMU point guard Nic Moore and FGCU shooting guard Julian DeBose.

Two days removed from winning the gold medal at the World University Games in Gwangju, South Korea, the Kansas basketball program returned to Lawrence. Amongst the Jayhawks on the roster, guards Frank Mason III and Wayne Selden Jr. and forward Perry Ellis led the way in South Korea, with players such as Hunter Mickelson stepping forward as well.

The team also had two non-Kansas players on the roster in SMU guard Nic Moore and FGCU guard Julian DeBose, both of whom were contributors throughout the event as well with Moore starting alongside Mason and Selden. Yet while the players will likely get some time to relax, Self has the second evaluation period of the month to focus on.

Late in the third quarter of the Kansas/USA team’s World University Games quarterfinal matchup with Lithuania, Bill Self’s team led by just one point (43-42) and appeared to be locked in a struggle similar to that of their one-point win over Serbia in group play. However that would not be the case, as the Americans clamped down defensively and Lithuania could not hit a shot.

A 15-0 run established the distance needed to put the game away, with Self’s team going on to win by a final score of 70-48. After scoring eight points in the third quarter the Americans outscore Lithuania 25-6 in the fourth, with Frank Mason III leading a balanced offensive effort with 18 points to go along with seven rebounds, four assists and four steals.

Paulius Dambrauskas, who scored 12 points and was a difficult matchup for the Americans in the first half, led Lithuania with 18 points but did not score again until just past the halfway point of the fourth quarter. Also of note on the Lithuanian team was Evansville rising senior forward Egidijus Mockevicius, who had a quiet night after rolling his right ankle chasing down a rebound just over a minute into the game.

Mockevicius, who has led the Missouri Valley Conference in rebounding each of the last two years and was a first team all-conference selection in 2014-15, finished the game with two points and five rebounds. As a team Lithuania shot just 27 percent from the field, with their percentage plummeting after they made seven of their 13 shots from the field in the first quarter.

Next up for the United States, which has reached the semifinals of the World University Games for the first time since 2009, will be either Russia or Estonia. That 2009 team, coached by Wisconsin head coach Bo Ryan, won the bronze medal.

One night after wrapping up a spot in the quarterfinal round of the World University Games with a one-point win over Serbia, Kansas/United States took on Switzerland in its final group play match Wednesday night in Gwangju, South Korea. And Bill Self’s team didn’t have much trouble with the Swiss either, scoring 12 of the game’s first 15 points and going on to win by the final score of 96-57.

The leading scorer for the Americans was one of the two players on the roster who will not suit up for the Jayhawks this coming season in guard Julian DeBose, who plays his college basketball at FGCU. The rising senior led the way with 18 points on 8-for-11 shooting to go along with four rebounds.

DeBose was one of four players to score in double figures, with Wayne Selden tallying 16 points and Perry Ellis and LaGerald Vick adding 11 apiece. Vick also grabbed a team-high seven rebounds. Nic Moore, who was the American Athletic Conference Player of the Year at SMU last season, dished out six assists with Kansas’ Frank Mason III racking up five himself.

The Americans shot 59 percent from the field (which includes a 5-for-16 fourth quarter), and one night after struggling mightily from beyond the arc against Serbia they rebounded to shoot 10-for-17 from three. Next up for Self’s team will be Lithuania in Friday’s quarterfinal round.

The Kansas-heavy Team USA roster prevailed again in the World University Games on Sunday morning as the team defeated Brazil, 81-72, during the second pool play game in South Korea.

Sporting new uniforms that were more focused on the United States instead of the Jayhawks, the team overcame a chippy contest with the Brazilians to move to 2-0 in the five-game pool play portion of the event. Trailing 13-11 after the first quarter, the Americans relied on Kansas rising junior wing Wayne Selden to deliver as his three 3-pointers in the second quarter helped give Team USA a lead that they wouldn’t give up.

Selden, who has been very good this summer, finished with a team-high 23 points to go along with four rebounds, three assists and three steals. Other Kansas players also stepped up on Sunday including guard Frank Mason (15 points, eight rebounds, seven assists), center Hunter Mickelson (11 points, eight rebounds) and forward Jamari Traylor (10 points). Rising senior forward Perry Ellis also added nine points and eight rebounds for the Americans while incoming freshman LaGerald Vick was 2-for-3 from beyond the arc on his way to eight points.

The next game for Kansas/USA will be played at 11 p.m. EST on Tuesday, July 7 as they face Serbia in another pool play game.

With Montrezl Harrell moving on to the NBA, Louisville has to account for the loss of its most productive front court player in 2015-16 (they also lost guard Terry Rozier to the NBA). One of the big men who will be expected to step forward for the Cardinals is rising junior forward Mangok Mathiang, who will be Rick Pitino’s second-most productive returnee when next season begins.

Mathiang, who made nine starts and averaged 2.6 points and 4.7 rebounds per contest last season, is playing with Australia in this month’s World University Games and the experience could serve as a springboard into next season. Mathiang’s off to a good start in Gwangju, South Korea too, as he posted a double-double in the team’s comfortable win over Chinese Taipei on Friday.

Mathiang finished the night with 23 points and 11 rebounds, shooting 11-for-15 from the field against Australia’s overmatched opposition. Mathiang reached double figures in scoring twice last season, tallying 11 points in a win over Virginia Tech and 12 in a win over Pittsburgh. But given the loss of Harrell, Louisville will need more consistent play from the 6-foot-10 Mathiang if they’re to make a run at another Elite Eight appearance.

He won’t be the only option for Louisville inside, as the Cardinals return Chinanu Onuaku, Jaylen Johnson, Anas Mahmoud and Matz Stockman, and add Raymond Spalding. The Cardinals will certainly have bodies to call upon in the post; what they’ll need from those options is consistency.

Mathiang and his teammates, which include Albany senior Peter Hooley (who scored 15 points Friday) and former collegians Hugh Greenwood (New Mexico) and Mitch McCarron (Division II Player of the Year at Metro State last season), will face stiffer competition in South Korea beginning with France in their next game. But the 93-47 win is a good start for the Australians, especially if Mathiang can build on his performance.