The 5-foot-7 Jefferson was sensational at times during his sophomore season with the Tigers as he put up 23.1 points, 4.6 assists and 3.1 rebounds per game, helping lead Texas Southern to a victory in the 2018 NCAA Tournament’s First Four in Dayton over North Carolina Central. One of the most entertaining talents in college basketball, Jefferson is leaving Texas Southern in-part because former head coach Mike Davis took the job at Detroit this offseason.

While Detroit is going to be the favorite to land Jefferson, because of his connection to Davis, it’ll be interesting to see what his transfer market looks like. Jefferson also made it clear on his Twitter page that he would like to be closer to his hometown of Milwaukee so that he can be closer to his ailing grandfather.

Given NCAA transfer rules, Jefferson would likely have to sit out next season before getting two more years of eligibility. But he could be applying for a waiver if he’s trying to be closer to home to deal with his family situation.

Seeding: With champions from the MEAC, Big Sky, Big West and Southland all with inferior RPIs compared to Texas Southern, it’s likely that the Tigers will avoid Dayton and the No. 16 line all together. Entering the day, NBC Sports latest bracket projected the Tigers to be a No. 15 seed, squaring off with Duke.

Names you need to know: Zach Lofton is the team’s leading scorer at 17.4 points per game. Demontrae Jefferson, the diminutive freshman floor general, is a human-highlight reel and 7-foot-1 Marvin Jones is the conference’s defensive player of the year.

Stats you need to know: The Tigers don’t shoot the ball well from deep. In fact, both of their top scorers are sub-30 percent shooters from distance. Texas Southern likes to get to the line where a quarter of its points comes from. As a team, the Tigers shoot at a 74 percent clip.

Big wins, bad losses: Best wins would technically be back-to-back road wins at Rice and La Salle in November. Assuming TCU hears its name called on Selection Sunday, the Tigers have lost to five NCAA Tournament teams (Arizona, Louisville, Cincinnati, TCU and Baylor) by an average margin of 30.8 points. Texas Southern also lost in overtime to Mississippi Valley State (7-25). It was the Tigers first of two conference loses to teams with losing records.

How’d they get here?: Aside from a few slip ups in conference play and a few close calls against Alcorn State, it was another impressive year in the SWAC for the Tigers. Texas Southern actually clinched its tournament berth after a semifinal win over Grambling State because Alcorn State, the other SWAC finalist, was ruled ineligible for the NCAA Tournament.

Outlook: Not great. If Texas Southern’s non-conference performance against a handful of tournament teams is any indication of what’s to come, Mike Davis and Co. will be one-and-done.

How do I know you?: Mike Davis, in his fifth season at Texas Southern, took Indiana to the 2002 national championship game. It’s the third time the Tigers have reached the NCAA Tournament during his tenure. 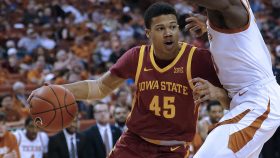 Today, we are previewing the Southwestern Athletic Conference.

Last season, Texas Southern reached the NCAA tournament for the second-straight season under head coach Mike Davis. The Tigers will be in position to three-peat, but Southern, which last reached the tournament in 2013, and Alabama State look to end the trend.

Texas Southern will begin a quest for a third straight conference title without 2014 SWAC Player of the Year Madarious Gibbs. But the Tigers return two all-SWAC caliber seniors in Chris Thomas and Malcolm Riley. Both finished the season strong, with Thomas averaging 14.8 points in postseason play and Riley posting 18 points and 10 boards in a 62-58 win over Southern in the SWAC Tournament championship game. David Blanks and Tonnie Collier are two key holdovers for the Tigers, but don’t forget about Jose Rodriguez, the 6-foot-7 forward who missed last season due to injury. He averaged 11.4 points and 5.7 rebounds in 2013-14.

Southern brings back one of conference’s best perimeters with Adrian Rodgers, the team’s leading scorer, and junior Trelun Banks and Christopher Hyder, who averaged 3.9 assists per game. The other returning starter for the Jaguars is 6-foot-9 sophomore Jarred Sam. Sam will have to hold down the inside for the Jaguars as the only returning big man who played significant minutes. Southern had one of the better defensive teams in the SWAC last season, and that could remain the same this year. But Southern will have to put an emphasis on rebounding with a thin frontline.

Wedged in the middle of Southern and Texas Southern the past two seasons has been Alabama State. In both campaigns, the Hornets have failed to make it past the SWAC semifinals. Jamel Waters is set to change that in 2015-16. Alabama State graduated two double-digit scorers, but look for Bobby Brown and Steve Rogers, two players capable of knocking down threes, should see benefit from playing alongside Waters.

Jackson State and Alabama A&M should round out the top-5 in the conference. Alabama A&M returns all five starters Ladarius Tabb, the first team snub from a season ago, and Nick West, the SWAC’s top rebounder. Jackson State also has its starting five back, including Raeford Worsham, who was limited last year after transferring in. Arkansas Pine Bluff, no longer facing an APR ban, can’t be overlooked either with three returning starters.

A season after being named SWAC Newcomer of the Year, the 6-foot-5 guard should be the favorite for SWAC Player of the Year honors. Tabb led the conference in scoring and was second in rebounding (behind teammate Nick West), averaging 20 points in 19 games against SWAC opponents and recording 11 double-doubles during the course of the 2014-15 season.

THE REST OF THE PRESEASON SWAC TEAM:

Another in-season tournament schedule has been officially completed, as the slate for the MGM Grand Main Event (to be held at the MGM Grand Garden Arena in Las Vegas) was announced Wednesday by BD Global Sports. The tournament consists of two four-team brackets, with the teams in the Heavyweight Bracket (Clemson, Creighton, Massachusetts and Rutgers) getting to host at least two home games before heading to Las Vegas for games November 23 (Monday) and 25 (Wednesday).

In the Heavyweight Bracket semifinals November 23, Clemson will take on UMass with Creighton/Rutgers being the other matchup. The consolation and championship games will be held two days later.

There’s also a Middleweight Bracket, with UTSA and Central Arkansas meeting in one semifinal and Texas Southern and Howard in the other. Those four teams will play two road games apiece against the teams in the Heavyweight Bracket before they play in the afternoon sessions in Las Vegas November 23 and 25.

Of the eight teams in the event just one, Texas Southern, played in the NCAA tournament last season. Mike Davis’ Tigers, who won games at Kansas State and Michigan State last season, was the SWAC’s automatic entrant and lost to Arizona in the round of 64.

Trae Jefferson, one of the more entertaining players to watch in the Class of 2015, announced that he had committed to Texas Southern on Tuesday afternoon via his personal Twitter account.

There’s no shortage of YouTube videos of the diminutive 5-foot-7 point guard. There’s this one from BallisLife that was uploaded last August and this one from last month of him torching defenders while wearing sweatpants.

Jefferson was once listed in the Rivals 150 and is still listed as a four-star recruit, according to the same recruiting service. Despite the ranking, he could only land offers from Atlantic 10, Conference USA, Horizon League and Big West programs, according to Rivals and ESPN, which rated him as a three-star prospect.

It’ll be interesting to track how Jefferson translates to the next level, but he should form an entertaining backcourt alongside rising junior guard Chris Thomas.

Texas Southern is coming off a 22-win season and reaching the NCAA tournament for the second consecutive season.