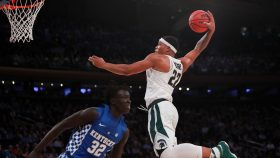 COLLEGE BASKETBALL BOLD PREDICTIONS: What craziness should you expect this season?

Mid-majors ready to crash the dance

Under The Radar Stars You Need To Know

Today, we are previewing the SoCon.

The SoCon has been one of the most unpredictable conferences in college hoops over the last several years. Last season saw a three-way tie for first place in the regular season and the conference saw its third unique NCAA tournament representative in three years. This season should be wild as well as the SoCon has many of the nation’s elite three-point shooters returning.

Furman has a new head coach as Bob Richey was promoted to take over for Niko Medved (Drake) as he inherits a strong roster that won 23 games and tied for first last season. Four starters return for the Paladins, including senior guard and reigning SoCon Player of the Year Devin Sibley along with double-figure scorer Daniel Fowler. If Furman can get more interior help for its guard-heavy team then they could be the team to beat.

Returning the top seven scorers from a 20-win team, Samford has a lot of positive momentum in head coach Scott Padgett’s third season. Senior Demetrius Denzel-Dyson is one of the league’s most versatile talents as he’s joined by three more returning double-figure scorers. UNC Greensboro loses some firepower from a 25-win NIT team but junior sharpshooter Francis Alonso returns along with a good amount of interior depth. Replacing point guard Diante Baldwin could be key.

Five senior starters are back for Mercer including the dynamic backcourt duo of Ria’n Holland and Jordan Strawberry. Small forward Demetre Rivers also returns along with the frontcourt of Desmond Ringer and Stephon Jelks. The Bears have a lot of size but they need to improve defensively. East Tennessee State was the league’s autobid last season but the Buccaneers lose six dynamic seniors from that group. Guard Desonta Bradford is the team’s only returning double-figure scorer while junior college transfer forward Jeromy Rodriguez has a lot of hype as a scorer.

Wofford could be an intriguing team to watch as junior scorer Fletcher Magee leads the backcourt. Junior forward Cameron Jackson also returns as the Terriers have the personnel to either play a perimeter-oriented attack or more of a traditional lineup. Good news for Western Carolina as all five starters are back from last season’s team. But the Catamounts struggled to a 9-win season as the offense only shot 39 percent from the floor. Haboubacar Mutombo, nephew of Dikembe Mutombo, headlines the returning core.

The Citadel should continue to play fast as double-figure scorers like junior forward Zane Najdawi and sophomore gunner Preston Parks return.  New head coach Lamont Paris comes from Wisconsin to Chattanooga, and he doesn’t have any starters coming back from a 19-win team. Junior big man Makinde London showed promise as a role player last season for the Mocs. VMI lost its top three scorers from a young roster. Senior forward Armani Branch is the team’s only returning starter.

The reigning SoCon Player of the Year, the 6-foot-2 Sibley was a big-time scorer for Furman last season. Putting up 17.7 points, 4.1 rebounds and 2.3 assists per game, Sibley’s efficiency stood out. Shooting 52 percent from the floor and 44 percent from three-point range, Sibley rarely takes a bad shot.

THE REST OF THE PRESEASON ALL-SOCON TEAM

The process of installing a new system can be a difficult one, especially when doing so at a program that hasn’t experienced much success in recent years. That’s what Duggar Baucom, in his first season as head coach at The Citadel, is faced with as he looks to build the program into one that pressures full court and plays fast for 40 minutes. Saturday night the Bulldogs took on No. 24 Butler at Hinkle Fieldhouse, and things got bad in a hurry.

Chris Holtmann’s Bulldogs, picked to finish third in the Big East’s preseason coaches poll, didn’t have much trouble breaking The Citadel press and found plenty of quality scoring opportunities as a result. But even with that being the case, Butler managing to score 144 points in a 73-point victory (144-71) was a shocking development.

The point total represents the most scored in a game matching Division I teams since TCU scored 153 in a win over UT-Pan American (now UT-Rio Grande Valley) in 1997 according to ESPN Stats & Information. Butler shot 63.6 percent from the field, and that percentage includes an 8-for-26 night from beyond the arc. While the perimeter shots weren’t falling at the rate Butler would have liked, they found so many looks around the basket after breaking The Citadel pressure that it didn’t matter.

How easy did Butler find it to get into the paint? They finished the game with a staggering 92 points in the paint.

Kellen Dunham scored 22 of his team-high 24 points in the first half, with Jackson Davis (eight rebounds) scoring 19 points, Roosevelt Jones (11 rebounds, four assists) and Tyler Wideman (six rebounds) adding 18 apiece and Tyler Lewis accounting for 17 to go along with three assists. All 12 Butler players scored at least two points, with seven of the 12 finishing in double figures.

While Butler should be better offensively thanks in part to the addition of NC State transfer Lewis, they’re unlikely to have it this easy in any game they play the remainder of the season.

As for The Citadel, these growing pains come with the work of establishing a new style of play. Baucom’s going to continue to work towards remaking the program in the image he wants, and that’s going to lead to some tough nights. But even with Saturday’s result being what it was, don’t expect him to suddenly back away from looking to force the tempo on both ends of the floor.

As a sophomore in 2014-15, guard Tevon Saddler led UNCG in scoring (13.4 ppg) and assists (4.0 apg) while also grabbing 4.6 rebounds per game. After earning third team all-conference honors last season, Saddler was expected to lead the way for a team that returns five of its top six scorers from a season ago.

However things have changed, with it being announced by Miller Saturday evening that Saddler has left the team. And it’s a move that caught Miller’s program by surprise as they’re just one week away from their season opener against Greensboro College.

“Our entire program was caught off guard by Tevon’s decision to quit our team a week before our first game,” Miller said in a release. “The timing of this makes it very difficult for me to understand his decision. That said, our focus is on the young men in our locker room that our committed to this program and committed to each other”

To have this occur at this juncture in the team’s preparations for the upcoming season, especially when it was a surprising decision, is tough for UNCG. With Saddler’s departure junior guards Diante Baldwin (10.2 ppg, 3.5 apg) and Clay Byrd (5.5 ppg) become even more important players for the Spartans, with forward Kayel Locke (12.6, 5.7 rpg) and center R.J. White (11.8, 6.9) now the team’s leading returning scorers.

UNCG was picked to finish sixth in the SoCon in the preseason coaches’ poll, with Locke joining Saddler as a preseason all-conference selection.

UNCG announced Thursday that its athletic department has been placed on probation by the NCAA for rules violations that occurred between the 2007-08 and 2012-13 academic years. The violations, which were deemed to be secondary by the NCAA, were self-reported by UNCG and came as a result of programs failing to properly monitor the initial-eligibility and squad list certification processes.

“UNCG is committed to the highest level of NCAA compliance,” UNCG athletic director Kim Record said in a statement released by the school. “We are committed to abiding by all NCAA rules and I expect our entire athletic department to continue its strong dedication to compliance in the future.”

The case involves multiple inadvertent violations of the NCAA’s initial-eligibility legislation that resulted in 57 student-athletes from 2007-08 through 2012-13 academic years practicing, competing, receiving athletically related aid and/or receiving actual and necessary expenses for competition while ineligible. A majority of the deficiencies that caused the NCAA initial-eligibility certification violations included student-athletes not registering with the NCAA Eligibility Center, not completing the required amateurism certification questionnaire, not requesting certification for a specific sport in which the student-athlete participated, not submitting transcripts or test scores to the NCAA Eligibility Center and/or not requesting final amateurism certification. Additionally, from 2007-08 through 2010-11, the university did not require the athletics director or head coaches to review and sign squad lists and did not keep lists on file.

Thirteen sports, including men’s basketball, were cited in the report put together by the NCAA. Yet while the violations weren’t deemed to be serious, the number of violations (involving 57 athletes) factored into the NCAA’s decision to add a second year of probation. No sports lost scholarships as a result of the NCAA ruling.

Monday the Wofford athletic department announced the passing of guard Jeremiah Tate, who drowned in the early morning hours swimming in Lake Wylie which is split between North Carolina and South Carolina. Tate was a camp counselor at YMCA Camp Thunderbird, and according to media reports he and another counselor jumped from the Buster Boyd Bridge.

While the other counselor did return to the surface Tate did not, with rescue crews finding his body two hours later. Per a report from WIS-TV 10 in Columbia, South Carolina, witnesses said that Tate couldn’t swim with the other counselor stating that he didn’t know that to be the case.

“The entire Wofford College family is devastated and saddened today by the loss of Jeremiah Tate,” Wofford Director of Athletics Richard Johnson said in a statement released by the school. “Jeremiah was such a dedicated, loved and respected member of the men’s basketball team.

“He had a wonderful personality and had many friends on campus extending outside of the athletic department. Our thoughts, prayers and deepest condolences are with his family. He will truly be missed.”

Tate, who played in 13 games during his career at Wofford, was an Allstate Good Works Team nominee this past season.

This has been a busy month for new East Tennessee State head coach Steve Forbes, with three players transferring out and two committing to the Southern Conference program. Saturday night the Bucs landed another piece for its backcourt in the form of guard Ge’Lawn Guyn, who spent his first four seasons at Cincinnati.

News of Guyn’s commitment was first reported by Scout.com, and he’ll be eligible to play immediately for ETSU.

Due to a finger injury Guyn played in just two games for the Bearcats last season, and it was announced in early March that he’d been granted a release from his scholarship. Guyn played 19 minutes per game as a junior in 2013-14, and he averaged 21.5 minutes per game in the two contests he played in during the 2014-15 campaign.

For his entire career, Guyn averaged 3.1 points and 1.7 rebounds in just over 13 minutes of action per game. While the numbers certainly don’t jump off the page, Guyn gives ETSU another perimeter option to call upon with seniors Petey McClain and Lester Wilson, and sophomores Desonta Bradford and A.J. Merriweather being their most experienced returnees.

ETSU also adds junior college transfer T.J. Cromer and freshman Shemar Johnson to its backcourt. Guyn’s the second transfer from a Division I program to join ETSU this spring, with dismissed Indiana forward Hanner Mosquera-Perea being the first.

Mercer’s Ike Nwamu might have the best set of dunks from Midnight Madness festivities (VIDEOS) October 18, 2014 10:15 am

Davidson makes emphatic statement in pasting of Chattanooga January 31, 2014 10:35 am