Roy Williams did not mince words, calling this North Carolina team the “least gifted” he’s ever coached on his radio show Monday night.

In the midst of a difficult 8-6 start, the Tar Heels haven’t looked like an NCAA tournament-caliber team. That point was further evidenced by North Carolina’s recent home loss to Georgia Tech.

Williams gave his take during his weekly radio show “Roy Williams Live” on Monday, calling his team, “the least gifted team I’ve ever coached in the time that I’ve been back here.”

The Yellow Jackets jumped out to 27-4 lead as North Carolina missed its first 15 field-goal attempts. It was jarring to see the way North Carolina was dominated in the Dean Dome. They trailed by 20 points at halftime, which is the biggest deficit that the Tar Heels have ever dealt with at home at the half, and after the game Williams had plenty to say.

“I want to apologize to all the North Carolina fans, the people that care about our basketball program, former players, everyone that cares about us,” Williams said after the game. “We stunk it up tonight, and it’s got to me my responsibility. It’s the most negative I’ve ever felt about myself. The most negative I’ve ever felt about any team. We weren’t ready to play.”

“We stunk, OK. We were not very good,” Williams continued on Monday night. “The crazy thing about it is, our team, and we’ve had some very gifted teams, this is not a very gifted team. It’s just not.”

North Carolina is already facing a talent drain facing much of college basketball thanks to draft losses to Coby White and Nassir Little. Freshmen guards Cole Anthony and Anthony Harris are also out with injury.

The Tar Heels have to turn things around quickly if they hope to make the NCAA tournament.  ACC play continues as North Carolina hosts Pitt and Clemson the next two games.

North Carolina basketball is one of the biggest brands in college sports. They’ve won six NCAA national championships, been to 20 Final Fours and put dozens of players in the NBA. One of those players, Michael Jordan, just happens to be regarded as the best to have play the game, not to mention be the most important athlete ever in marketing.

That makes them a very important program to Nike, which outfits the school. In light of the scandal rocking college basketball at the moment, in which an adidas employee is accused of funneling money to a prospect’s family, all relationships between athletic departments and apparel companies are under scrutiny.

“I’ve dealt with Nike and Jordan Brand since I came back here, but we never even discuss things like that. So I know it’s foreign to me.”

Certainly, to expect a coach at any school to say anything other than that regarding an apparel company would be pretty silly and naive. This is a chance, however, to explore the word “help” in terms of shoe company influence.

The FBI investigation and subsequent charges documents allege to expose a pretty blatant and, according to the justice department, illegal way apparel companies can “help” schools get players. Paying a player is as direct a way as it gets. But it’s not the only way.

Maybe the least nefarious way an apparel company can help is simply doing what they pay schools to do. Hook them up with cool gear.

I’d have to imagine that being one of just a handful of teams that rep Jordan Brand has to have some appeal to prospects. I know getting a pair of national championship Jordan shoes, of which only 25 were made, is pretty dang cool. That might “help” a prospect come to the conclusion North Carolina is the place for him.

J's fit for a champ pic.twitter.com/u7vuc512FL

So maybe Nike has never “helped” UNC get a player like Williams said and in the context in which he said it. But the Swoosh has certainly helped North Carolina get players.

North Carolina added another point guard for the future on Friday afternoon.

Jeremiah Francis, a four-star floor general from the Class of 2019, announced via Twitter that he had made a verbal commitment to the Tar Heels.

Joel Berry is set to exhaust his eligibility at the end of this upcoming season. Roy Williams has responded to that impending departure by adding lead guard Jalek Felton, nephew of former UNC star Raymond Felton, to this year’s team. Rechon Black, another four-star point guard, is set to join the program in the fall of 2018.

Francis, who plays for Pickerington Central in Ohio, is the first commit for UNC in the Class of 2019. He picked the Tar Heels over the likes of Ohio State, Indiana, Florida State and West Virginia, among others. His high school teammate, Sterling Manley, a three-star big man, will be a freshman at North Carolina this fall.

The 6-foot-2 Francis spent the spring and summer playing for Indiana Elite in the adidas Gauntlet.

There was a theory floating around the North Carolina locker room as to why the Tar Heels’ highest-profile fan, former UNC great Michael Jordan, had been nowhere to be seen during its title run that concluded Monday night with a win over Gonzaga.

“Last time we talked to him, we saw him, was the Duke game at home,” Theo Pinson said. “I think he thinks he’s bad luck.”

Turns out, after watching his beloved Tar Heels fall on a buzzer-beater in the title game in 2016, that’s precisely what His Airness was thinking.

“People asked me for the last day and a half if he was going to come,” UNC coach Roy Williams said on the Dan Patrick Show. “I said guys, knowing him, he’s going to say, ‘I went last year, you lost.’ That’s what I was thinking.”

As Williams made his way out of University of Phoenix Stadium with his third national title secured, he mentioned the theory once more to a North Carolina administrator.

“I’ll give you any odds you want,” Williams recalled saying, “but I’ll bet you a text message from Michael or a voicemail from Michael, and he’s going to say something about coming last year.

“Sure enough, I got on the bus … had a quite a few messages, and one of them was from Michael.

“So I collected some money last night.”

Even the greatest player of all time doesn’t want to tempt fate with a title on the line. Not to mention, no one can prove Jordan wasn’t right to stay away. North Carolina has another banner. Maybe he was on to something. It’s probably best not to question MJ on matters of basketball, anyway. 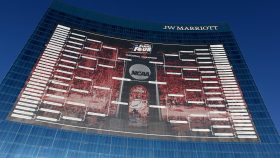 Assembly Hall in Bloomington, Indiana, was the place to be in the American sports world last night, as the No. 13 Hoosiers put together a dominating performance – they never trailed and UNC only got within four points once in the second half – to pick off the No. 3 Tar Heels.

The win came just eight days after Indiana went into Fort Wayne and lost to the Mastadons in overtime, and I don’t think it’s a stretch to say that the crowd played a role in that result. Indiana students had been lined up, and likely lubricating, to get into the game since early that morning, and it showed. That building was deafening, and the energy spurred the Hoosiers to a 26-9 lead before UNC had realized what was going on.

UNC head coach Roy Williams said as much after the game, according to the Raleigh News & Observer.

“It was a great college basketball atmosphere, and one team really played right from the get-go, the second one did not and that was us,” Williams said. “We were not ready for the intensity, the enthusiasm, anything that you want to talk about in the first half. But it was a wonderful crowd.”

“Gosh. I’d like to play in front of a crowd like that in the Smith Center every night other than the frickin’ Duke game. And that was just – congratulations to them, their fans, their students. It was a big-time crowd.”

Yup, that Williams throwing shade at the wine and cheese crowd that attends North Carolina games, and he’s not wrong. The atmosphere at the Dean Dome, one of the historic buildings in the sport, isn’t what it is at some other college basketball venues because the good seats don’t go to the students, they go to the people with the money. They may love their Tar Heels, but they’re not yelling and screaming for 40 minutes the way a drunk 20-year old will be.

North Carolina isn’t alone with this issue – Kentucky’s Rupp Arena has a similar reputation – and I’m not sure if it’s something that can change anytime soon. Those big-money donors aren’t going to want to give up their good seats. I know I wouldn’t.

But it is something that matters.

There’s a reason we always talk about how difficult it is to win on the road in college basketball. Indiana showed us why last night.

With guards Jalek Felton and Andrew Platek having committed in their 2017 recruiting class, North Carolina received a commitment from one of the better guards in the Class of 2018 Thursday night. Four-star guard Coby White, who’s ranked 61st in his class by Rivals.com, made his pledge to Roy Williams’ program. News of White’s commitment was first reported by Scout.com.

The 6-foot-4 White is a native of Wilson, North Carolina, where he attends Greenfield HS, and he played his grassroots basketball for the CP3 16U basketball program this summer. His commitment to UNC comes just a couple days after the ACC school offered him a scholarship.

White took an unofficial visit to UNC in June, and his play in July ultimately led to the program making the aforementioned scholarship offer. By the time White enrolls in Chapel Hill, current veterans such as Joel Berry II and Nate Britt will be out of eligibility. Among the perimeter would could potentially be on campus in 2018 are freshmen Seventh Woods and Brandon Robinson, and sophomore Kenny Williams.

White is the second commit in the 2018 class for the Tar Heels, with 6-foot-7 guard Rechon Black being the first.

Roy Williams takes shot at UNC crowds, wishes they were more like Indiana December 1, 2016 9:21 am

North Carolina announces receipt of Notice of Allegations from NCAA May 22, 2015 1:00 pm

Status of North Carolina forward remains uncertain ahead of Thursday’s game against No. 1 Wisconsin March 25, 2015 8:05 pm