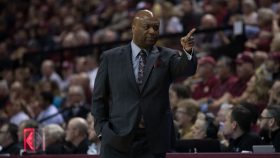 Monday Overreactions: Should we be worried about San Diego State and Gonzaga?

The series between BYU and Utah has been an intense one, with the two programs meeting a total of 257 times with the Cougars holding a slim 129-128 advantage. But after last season’s meeting, a comfortable Utah win mired by the ejection of BYU’s Nick Emery for striking guard Brandon Taylor late in the second half, threatened the future of the series.

Utah head coach Larry Krystkowiak wanted to call a halt to things, and sure enough it was announced in January that the Cougars and Runnin’ Utes wouldn’t play each other during the 2016-17 season. But the “break” will only last one season, as Utah announced Thursday that the two teams will meet in Provo during the 2017-18 season.

Athletic director Chris Hill stated in a release that also announced non-conference series with Butler and Xavier set to begin this season that the game will be played in either November or December 2017.

Hopefully the one-year hiatus will be the only hiccup in this series, one that began way back in 1909 and managed to endure changes such as the run of conference realignment that landed Utah in the Pac-12 and BYU in the WCC. As for those games against Butler (November 28) and Xavier (December 10), Utah will host the Bulldogs and visit the Musketeers this season with the return games for both series to be played during the 2017-18 season.

News of the resumption of the BYU/Utah series was first reported by the Salt Lake Tribune.