The Memphis and Tennessee rivalry has reignited into one to watch at all times thanks to a testy back-and-forth between head coaches Penny Hardaway and Rick Barnes.

During Tennessee’s win over Memphis, things got heated in the final minutes as the Vols’ Jordan Bone and the Tigers’ Alex Lomax were issued double technicals for jawing a bit. It didn’t seem like much of anything at the time as the game ended without much further incident. But Hardaway made some remarks after the game making it sound like Tennessee was trying to potentially instigate a fight.

“I said [to referees], ‘The entire Tennessee team ran over to fight,'” Hardaway said after the game. “Their entire team emptied the bench to run over. They didn’t come over because it was a timeout.

“You could visibly see guys with their fists balled, talking trash to our guys. It was almost like a standoff. I was asking the referee why they were able to come across the line into our area and not get a technical.”

Hardaway also stood up for Lomax as the type of person who wouldn’t normally engage in trash talk.

Barnes took a subtle jab at Hardaway in return on Monday during an appearance on Vol Calls.

Rick Barnes to Voice of the #Vols Bob Kesling on tonight’s Vol Calls: "At any time Saturday did you ball your fist up and get ready to fight the other commentator?”

The response from Barnes appears to have ruffled some feathers with Hardaway, as he made it personal with his latest comment to the Tennessee coach.

Penny Hardaway ended his chat with reporters like this … "Rick Barnes … Get the &*$% out of here."

I've never heard a coach talk like Penny just did about Rick Barnes.

It doesn’t sound like this one is going to be over for a bit. Stay tuned on this one…

Fourteen years after T.J. Ford left the University of Texas for the NBA he returned to graduate. And his head coach, Rick Barnes, was there to see the former national player of the year receive his diploma.

Ford and Barnes shared an emotional moment when talking to reporters following the ceremony.

Rick Barnes came back to #Texas to watch TJ Ford graduate 15 years after he first stepped on campus. Watch this emotional exchange: pic.twitter.com/prkmCPqvpO

As a sophomore in 2003, Ford led the Longhorns to the program’s first Final Four appearance in 56 years. The floor general went on to be named Naismith College Player of the Year and received the John Wooden Award.

Barnes, who is currently the head coach at Tennessee, spent 17 seasons at Texas.

Ford’s No. 11 is retired by the university.

KNOXVILLE, Tenn. (AP) Tennessee guard Lamonte Turner believes his year away from competition has made him a better player.

Now he’s eager to show just how much he’s learned during that time away.

After being ruled ineligible last season, Turner will finally make his Tennessee debut in the upcoming season. He hopes to give the Volunteers the pure point guard they’ve lacked in recent years.

Tennessee never specified the reason Turner was unable to play last season beyond saying that he wasn’t cleared by the NCAA eligibility center. Turner said the NCAA’s decision caught him by surprise and was devastating at the time.

The NCAA did allow Turner to work out with his teammates last season, and Turner spent many of those practice sessions guarding Kevin Punter, the Southeastern Conference’s second-leading scorer last season. Turner said his focus on defense made him more of a well-rounded player. He also spent countless hours in the film room and educated himself on how to properly scout for particular opponents.

Turner, a 6-foot-1 redshirt freshman, believes he grew so much from the experience that it almost gives him an unfair advantage.

“I feel like it’s kind of cheating to let somebody sit there and watch the game and learn so much stuff and then play the next year just because of all you can learn,” Turner said. “I’ve learned so much that it’s almost like having the answers to a test, you know what I’m saying? That’s how I feel right now. I feel like I have the answers to the test.”

Tennessee needs Turner to provide solutions for a program that is overhauling its roster after producing its first losing season since 2004-05. The Volunteers must replace three of the top four scorers from a team that went 15-19 last season. Tennessee’s 2016-17 roster will include six true freshmen as well as Utah State graduate transfer Lew Evans.

When Tennessee coach Rick Barnes was asked late last season who might take over a leadership role in 2016-17, the first person he mentioned was Turner. Barnes noted that Turner definitely would have started and that “we would’ve been a different team” if he’d been available in 2015-16.

“They have like a father-and-son relationship,” said Turner’s mother, Amanda Simpson. “Coach Barnes is crazy about Lamonte, and Lamonte has the utmost respect for coach Barnes.”

Turner’s life experience has enabled him to emerge as a potential leader before playing his first college game. He gained plenty of perspective during high school.

He left his Alabama home after his sophomore year to transfer to Arlington Country Day School in Jacksonville, Florida. He spent his final year of high school at IMG Academy in Bradenton, Florida.

“It was really kind of like going to college a little early,” Turner said of the move to Arlington Country Day. “We’d play in New York today and would be in Florida next week. It was a lot like college. I was playing against a lot of guys who were going to be playing college basketball or the pros.”

He got even more of an education last year while being unable to play. The circumstances humbled him, particularly when he would walk around unnoticed while his teammates would be recognized.

“I just told him continue to pray and that everything happens for a reason, that his time was coming,” Simpson said.

That time is almost here. 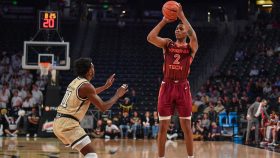 CBT Podcast: What are the greatest college basketball coaching rants of all-time?

After dealing with front court depth issues throughout Rick Barnes’ first season in charge at Tennessee, the Volunteers picked up an important commitment Monday afternoon. Lew Evans, a power forward who played at Utah State last season, made his pledge to join Tennessee as a grad student. News of Evans’ commitment was first reported by ESPN.com, and he’ll be eligible to play immediately for the Volunteers.

The 6-foot-8 Evans averaged 8.4 points and 5.6 rebounds per game last season, and his addition gives Tennessee needed size and experience in the post. With Armani Moore graduating, Tennessee will be very young in the front court next season with Evans being joined by freshmen John Fulkerson and Grant Williams, and sophomore Kyle Alexander.

Depth in the post will still be a concern for a team that has the perimeter players needed to go small, but at least with Evans joining the program Tennessee will have an experienced option to call upon. 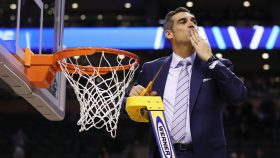 Leading Tennessee 34-13 with 5:46 remaining in the first half, No. 20 Kentucky looked poised to not only rebound from their loss at No. 4 Kansas but do so in impressive fashion. Things didn’t stay that way however, as the Volunteers finished the half on a 23-8 run to close the margin to six. Rick Barnes’ team continued its run of good play in the second half, going on to beat the Wildcats 84-77 in Knoxville.

Just a couple days after playing one of their best games of the season and appearing to have turned a corner even in defeat, the young Wildcats showed that there’s still plenty of progress to be made.

The difference came at the foul line, where Tennessee outscored Kentucky 30-18 with Kevin Punter responsible for 10 of those points. Punter, who adjusted his shooting motion during the offseason, has been one of the nation’s most improved players. And against Kentucky the senior produced 27 points, and while he shot just 7-for-19 from the field Punter’s ability to create plays off the bounce applied pressure to Kentucky’s half-court defense.

Add in a double-double from Armani Moore, the 6-foot-4 forward who more than held his own against the bigger Wildcats with 18 points, 13 rebounds and four assists, and Tennessee was able to change the flow of the game late in the first half and build on that in the second stanza.

This is a big win for Tennessee head coach Rick Barnes, as he looks to provide some much-needed stability for a program that has lacked that in recent years. Beating Kentucky won’t make much of a difference on Tennessee’s résumé; at this point in the season they’ll need to win the SEC tournament to hear their name called on Selection Sunday. But it does provide tangible evidence to the players (not to mention recruits) and fan base that the program is headed in the right direction.

That doesn’t help Kentucky however, and the Wildcats are still having issues when it comes to defending without fouling. Some may be quick to point out the “quality” of the whistle in recent games, but it should be noted that sending opponents to the line has been an issue throughout the year for the Wildcats. Kentucky entered Tuesday ranked 241st in defensive free throw rate (40.1), too high for a team that plays half-court man-to-man defense most of the tim.

Be it defending without fouling or communicating consistently on the defensive end, these are adjustments that have taken longer for Kentucky to work through than some anticipated before the season began.

But how much longer can John Calipari afford to wait for the Wildcats to play with consistent focus, taking care of the “small” details that can be the difference between simply playing in the NCAA tournament and excelling once there? The personnel questions are what they are at this point, with the front court production being inconsistent and the guards led by Tyler Ulis having to do much of the heavy lifting.

But Kentucky had a chance to put their foot on Tennessee’s neck late in the first half, and instead they let the Volunteers back into the game. That proved costly in Knoxville, and as a result the Wildcats dropped to two games behind first-place Texas A&M in the loss column.

KNOXVILLE, Tenn. (AP) Tennessee guard Robert Hubbs won’t play Saturday at No. 18 Butler as he recovers from arthroscopic surgery to his right knee.

School officials had indicated Hubbs was doubtful for the Butler game after he underwent the procedure on Dec. 1. Tennessee coach Rick Barnes updated Hubbs’ situation Thursday by saying the 6-foot-4 junior “is making good progress, but he’s not going to be ready for this one.”

Barnes didn’t know when Hubbs might return to action. Hubbs is averaging 15.3 points and 3.7 rebounds per game for Tennessee (4-3).

The trip to Butler (7-1) ends a 13-day break from games for Tennessee, which represents the program’s longest layoff during a season since December 1967.

Concussion to keep Texas forward out of Wednesday’s game against TCU February 11, 2015 7:54 pm

The ‘Chaminade Crew’ and how Jonathan Holmes has changed the culture of Texas hoops November 21, 2014 11:05 pm

To turn Texas around, Rick Barnes first needed to change the culture of his team November 11, 2014 3:29 pm