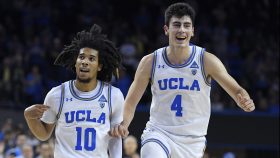 Bracketology: UCLA makes a case for an at-large

Back in September it was revealed that former Syracuse guard Dwayne “Pearl” Washington, who was not only one of the program’s greatest players but also a key figure in the growth of the Big East during its infancy, was undergoing treatment for a malignant brain tumor. The full process has been understandably difficult for Washington and his family, not only physically and emotionally but financially as well.

With that in mind a GoFundMe campaign was started by Washington’s longtime friend Brandon Steiner to help the family with the rising medical costs, which included Washington needing a nurse’s aide for 24-hour supervision according to the Syracuse Post-Standard. The campaign has raised nearly $39,000 to this point, with a goal of $93,000 being set.

Before the team’s basketball game against Notre Dame Thursday night players took to the Carrier Dome court for warmups in special T-shirts honoring Washington, with his nickname in the same cursive print used on Syracuse’s uniforms during Pearl’s time at the school.