URBANA, Ill. (AP) Prosecutors have dropped a misdemeanor domestic battery charge against Illinois basketball player Jaylon Tate after concluding there was not enough evidence to convict him.

Tate was arrested in March on suspicion of striking a woman. He pleaded not guilty.

Champaign County State’s Attorney Julia Rietz said Thursday that witnesses who were at a party with Tate and the alleged victim were going to testify that they did not see the two interact and saw her leave without injuries.

Tate is a 21-year-old junior. He was suspended from the team after his arrest.

URBANA, Ill. (AP) Illinois basketball player Leron Black has pleaded guilty to misdemeanor aggravated assault after threatening a bouncer at a campus bar and has been sentenced to a year of probation.

Champaign County State’s Attorney Julia Rietz said Thursday plea that Black was a candidate for probation because he took responsibility for the crime and had no prior record. The 20-year-old Black avoided jail time and the felony assault charge he faced after his Feb. 19 arrest.

Coach John Groce suspended Black after the arrest. A team spokesman did not immediately respond to a question about Black’s status.

Black is one of three Illini players arrested this year.

Juniors Jaylon Tate and Kendrick Nunn have both pleaded not guilty to domestic assault charges stemming from separate incidents in March.

Purdue is trying to win its first Big Ten Tournament title since 2009, the only time the Boilermakers won the event.

The Boilermakers outrebounded the Illini 20-11 in the opening 20 minutes and limited Illinois to 1-of-8 shooting from 3-point range.

Illinois she 38.5 percent in the first half, getting 12 points from Hill, who scored 30 in January when the Illini hosted the Boilermakers and won 84-70.

Illinois: The Illini advanced to the quarterfinals with victories against Minnesota and Iowa, making a combined 24 3-pointers … Illinois’ 27 victories in Big Ten Tournament competition are second-most in the league … The Illini won this tournament in 2003 and 2005.

Purdue: The Boilermakers, along with Michigan State and Maryland, are the only teams to receive double byes in the new 14-team Big Ten Tournament since Maryland and Rutgers joined in 2015 … Including Friday’s victory, Purdue will take a four-game winning streak into Saturday’s semifinals … Before facing Illinois, Purdue’s reserves had outscored the opponent’s bench in 29 of the first 31 games.

COLLEGE PARK, Md. (AP) Melo Trimble returned to form, the seniors excelled in their home finale and No. 14 Maryland played its best game in weeks.

“Just a feel-good night,” coach Mark Turgeon said after the Terrapins hammered Illinois 81-55 on Thursday. “It’s fun to have some like that every now and then.”

Trimble and Jake Layman scored 18 points each for the Terrapins, who never trailed. Maryland (24-6, 12-5 Big Ten) had lost three of four since climbing to No. 2 in the AP poll in early February.

Trimble made half of his 14 shots, collected eight rebounds and added five assists. The standout sophomore guard was 11 for 37 from the field over the previous four games, but in this one he turned it around.

“I really needed that. I just needed to see a shot go down, feel myself so happy again,” he said. “I haven’t been smiling the way I used to in a while. I just had to look in the mirror and see that I had an OK smile. I had to display it today on the court after I made a shot. I just felt good.”

Before the game, Maryland honored seniors Layman, Rasheed Sulaimon, Varun Ram and Trevor Anzmann. Layman made 7 of 11 shots; Sulaimon had nine assists and no turnovers; and Ram and Anzmann came from deep on the bench to team for a crowd-pleasing basket in the final minute.

Basically, everyone got into the act.

“We got rolling,” Layman said. “When we’re playing like that, sharing the ball, we’re very hard to guard.”

Jared Nickens and Robert Carter Jr. had 14 points apiece for the Terrapins, who earned a double-bye in the upcoming Big Ten Tournament.

“We feel like we can play with anybody,” Turgeon said.

The Terrapins finished 16-1 at home, the lone defeat against Wisconsin on Feb. 13.

Malcolm Hill, who came in averaging 18.2 points per game for the Illini, finished with 10 after making just one basket before halftime.

But it wasn’t so much Illinois’ lack of production as what Maryland did on the other end. The Terrapins made 18 of 27 shots over the final 20 minutes, including 10 of 13 from beyond the arc.

“Obviously what stands out is what they shot from the field in the second half,” Illinois coach John Groce said. “Not only from 2-point range, but obviously from 3. That was as good an offensive performance in a half that we’ve seen live and in person all year.”

Maryland led 33-25 early in the second half before Trimble, Layman and Nickens drilled successive 3-pointers to boost the margin to 17 points.

“We did some decent things,” Groce said. “Unfortunately, it came down to shot-making. And they just made a heck of a lot more in the second half.”

Morgan had 13 points and nine rebounds in the first half, but Illinois went 9 for 26 from the field and trailed 31-21.

Illinois missed its first seven shots and trailed 7-0 and 15-7 before whittling the deficit to 19-16. Maryland answered with a 12-3 run that included two baskets by Carter and 3-pointers by Nickens and Sulaimon.

Illinois: The Illini will finish the regular season without consecutive wins in the Big Ten. … Illinois fell to 1-6 against Top 25 teams. … The Illini’s three-game winning streak against Maryland ended. They are 5-6 all-time against the Terps.

Illinois is at Penn State on Sunday.

Maryland is at No. 12 Indiana, the Big Ten champions, on Sunday.

Nick Zeisloft scored 14 for Indiana, and Thomas Bryant had 14 points and eight rebounds.

The Hoosiers blew out Illinois with a barrage of second-half 3-pointers, going 10 for 17 from behind the arc over the final 20 minutes. They hit three in the first half.

Ferrell’s 19 second-half points equaled the output of the entire Illini team. He finished 11 of 18 from the field, including 5 for 10 from 3-point range.

One particular sequence illustrated what Ferrell means to the Hoosiers at both ends of the court. With just under 10 minutes left and the Illini trying to claw their way back into it, Nunn held the ball just outside the 3-point line as Illinois started to set up its offense.

But before Nunn could even glance at a teammate, Ferrell scooted by him, swiped the ball from a stunned Nunn and broke to the other end of the court. Ferrell’s easy layup put the Hoosiers up 50-37.

Just 2 minutes later, Ferrell sank a 3 that put the Hoosiers up 56-37 and silenced the arena – except for his own bench, which was whooping it up.

Indiana took Illinois’ best weapon, Hill, all but out of the game. By halftime he’d taken a total of two shots, missing both.

When he tried to force himself into it in the second half, the Hoosiers shut him down.

With the Illini down by six with just under 17 minutes left, Hill drove toward the basket but found two Hoosiers between himself and the rim when he got there. The junior was forced to kick the ball out to a teammate, who missed his shot, and Illinois came away with nothing.

Indiana: Starting guard Robert Johnson missed the game with a sprained ankle. … The Hoosiers close the regular season with a pair of games against ranked teams, at No. 8 Iowa and at home against No. 10 Maryland.

Illinois: The team’s only win over a ranked opponent this season was Jan. 10 against then-No. 20 Purdue. Since then the Illini have gone 3-8. Illinois is 1-5 against Top 25 teams this season. … Coleman-Lands was the only Illinois player who scored in double figures.

Indiana travels to No. 8 Iowa on Tuesday.

Illinois closes out its home schedule Sunday against Minnesota.

This story has been corrected to show Indiana is 13-3 in Big Ten play. 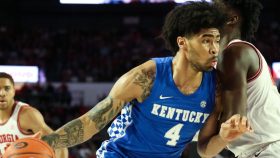 Richards, Quickley lead No. 15 Kentucky to OT win at No. 18 Texas Tech

Illinois forward Leron Black, who has missed the last 19 games due to a knee injury, landed in hot water early Friday morning as he was arrested at a Champaign nightclub according to the Champaign News-Gazette.

Per the report Black threatened a bouncer after he and some other patrons were removed from the club. Black reportedly took umbrage with the way in which he and his group were treated, ultimately leading to the confrontation with the bouncer. Black was found to have a folding knife, resulting in his being charged with felony aggravated assault.

“(Black) yelled ‘I don’t have a strap but I’m not afraid to cut somebody,’ ” Geis said. “Then the security guard said he pulled the knife, opened it and put it within 1 to 2 inches of his nose.”

Black could face anywhere from probation to 1-3 years in prison as a result of this charge. Illinois announced Friday that Black has been suspended indefinitely as the legal process plays out. With the many injuries they’ve had to deal with, this hasn’t been a smooth season for John Groce’s team. And this latest issue certainly doesn’t help matters moving forward.

Could John Groce be receiving another contract extension from Illinois? July 8, 2014 9:30 pm