Despite not being named in the federal court documents released Tuesday, it would appear the University of Miami is a part of an investigation into corruption in college basketball.

The Hurricanes were not mentioned by name in the report, but it does reference a school that fits Miami’s profile as a “private research institution located in Florida” with  “approximately 16,000 students and over 2,600 faculty members.” That institution, referenced as University-7 in the report, is accused of being the beneficiary of a plan to use $150,000 to “assist one or more coaches at University-7 in securing” a commitment from a “top high school basketball player expected to graduate in 2018,” according to documents.

Ten people were arrested in connection with the investigation, including four current assistant coaches from around the country.

Miami coach Jim Larranaga’s attorney denied his client’s involvement in any of the allegations.

“We are reviewing the allegations but I assure you they do not apply to our much loved Coach L,” Stuart Grossman told the Palm Beach Post in an email. “I just can’t comment further. It’s so difficult to respond to shrouded allegations.”

Federal investigators suggested Tuesday that the public part of the investigation is just now beginning to unfold.

“We have your playbook,” New York FBI Assistant Director in Charge William Sweeney said Tuesday at a news conference. “Our investigation is ongoing, and we are conducting additional interviews as we speak.”

Miami freshman guard Lonnie Walker has torn the meniscus in his right knee and will require surgery, the school announced.

Walker was hurt playing on Tuesday, and the timetable for his return will be unknown until after the operation.

If Walker is out for any significant amount of time during the season it will be a massive blow for a Miami team that is legitimately in the national title conversation this season. Walker is a top 15 recruit and a potential first round pick in next year’s NBA Draft, and his addition — along with the return of Bruce Brown — is the reason that Miami is sitting at No. 6 in the NBC Sports preseason top 25.

Miles Wilson will look to replicate the success other transfer guards have had under Jim Larrañaga.

The Mount St. Mary’s transfer has decided to transfer to Miami, according to Evan Daniels of Scout. The 6-foot-5 rising sophomore picked the Hurricanes over Auburn on Thursday evening following a visit to the Coral Gables campus this past weekend.

“I’ve liked them from the jump,” Wilson told Scout. “They’ve been showing me love and kept making me a priority. I’m excited about the opportunity they were presenting and giving me. I felt like I couldn’t turn it down.”

Wilson, as a freshman, was part of an NCAA Tournament team. Starting in 24 of 35 games, the first-year guard averaged 11.9 points and 3.9 rebounds per game. In the First Four against New Orleans, Wilson registered a double-double of 17 points and 11 rebounds. He followed that up with a 22-point — albeit of 20 field goal attempts — seven-rebound effort in a loss to then-reigning national champion Villanova.

According to NCAA rules, Wilson will have to sit out this season but will have three years of eligibility remaining starting in the fall of 2018.

By the time he is able to suit up for the Hurricanes, Wilson could be stepping into a huge role. Ja’Quan Newton is exhausting his eligibility at the conclusion of this season. And if Bruce Brown has the type of year many envision he’s capable of after a promising freshman campaign, he could be en route to the first round of the 2018 NBA Draft.

Virginia (26-6) and No. 7 UNC could each become NCAA Tournament No. 1 seeds after impressive showings this week. Against Miami (25-7), the Cavaliers led wire-to-wire to the delight of the crowd that made Verizon Center feel like a home game.

Ja’Quan Newton had 19 points off the bench to lead Miami.

Beginning with Brogdon’s 3-pointer 48 seconds in, Virginia led the entire first half. The Cavaliers went up by as many as 11 as eight different players scored but watched as Miami went on a 6-0 run to end the half and cut the margin to five.

Facing the same kind of hostile environment as Thursday night against Virginia Tech, Miami cut it as close as three points. A series of turnovers stunted the comeback bid, and Brogdon went to work scoring and playmaking.

With help from Marial Shayok (10 points) and London Perrantes (11 points), Virginia pulled away to lead by 13 with 3:10 left. The Hurricanes must now turn their attention to the NCAA Tournament, where they’re expected to be a high seed.

UNC routed Notre Dame Friday to make it to the title game. Virginia won the teams’ only meeting Feb. 27 in Charlottesville. The game features the top two seeds after the top four reached the semifinals.

“The ACC is a great conference,” UNC forward Justin Jackson said. “So at the end of the day, that’s what you expect in the championship game: to have two really good teams.”

Miami: Ivan Cruz Uceda did not play in the quarterfinal victory because of Virginia Tech’s speed, according to coach Jim Larranaga, who said the big forward would be a “major player” against Virginia. Cruz Uceda scored all eight of his points in the first half. … Senior guard Sheldon McClellan fouled out with 46.2 seconds left. He finished with 15 points on 5 of 11 shooting.

Virginia: Brogdon went 10 of 11 from the free throw line. … Virginia reached the ACC final for the sixth time in school history. … Last won the conference tournament in 2014. … The last time Virginia played in a game where each team shot over 50 percent was Dec. 7, 2013, against Green Bay.

ATLANTA (AP) Sheldon McClellan scored 22 points and Ja’Quan Newton hit a huge 3-pointer to lead No. 17 Miami to its fifth win in six games, 75-68 over Georgia Tech on Sunday.

In a game that was tight all the way, the Hurricanes (18-4, 7-3 Atlantic Coast Conference) were clinging to a 63-60 lead with the shot clock running down when Newton hurled up a desperation shot from the corner with 1:49 remaining.

Georgia Tech (12-11, 2-8) lost another tight one in the ACC, keeping the heat on embattled coach Brian Gregory. All eight of its conference defeats have been by less than 10 points, little consolation to a program that has struggled throughout Gregory’s five-year tenure.

Marcus Georges-Hunt scored 19 points to lead the Yellow Jackets before a sparse crown at McCamish Pavilion.

Miami made nine straight free throws in the final minute to seal the victory. 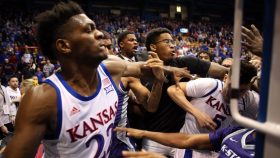 NC State junior Cat Barber has been one of the nation’s best point guards, and Saturday afternoon he added another piece of evidence to that argument by scoring 30 points in the Wolfpack’s 85-69 win over No. 15 Miami.

With the 30 points Barber reached that mark for the third time in the last four games, shooting 10-for-18 from the field and 10-for-10 from the foul line to go along with four assists against the Hurricanes. Given the importance of Barber to NC State he’s on the receiving end of a lot of attention from opposing defenses, but against Miami that didn’t matter as the junior was able to get to his preferred spots off the dribble throughout the game.

However it wasn’t perimeter play that cost Miami, as the Hurricanes received solid performances from its perimeter rotation including Sheldon McClellan (18 points) and Angel Rodriguez (15 points, six assists) What ultimately cost the Hurricanes was the fact that their front court was outworked by NC State throughout the day.

Kamari Murphy and Tonye Jekiri combined for ten points and nine rebounds, and Ivan Cruz Uceda went scoreless in his ten minutes off the bench. By comparison the NC State tandem of Abdul-Malik Abu and Caleb Martin combined for 32 points and 14 boards, with BeeJay Anya contributing seven rebounds. NC State limited Miami to 39.7 percent shooting and closed out many of those possessions with a rebound, grabbing 88.6 percent of the Hurricanes’ missed shots.

Add in a 34-20 edge in points in the paint, and NC State won the game by controlling the action within the most valuable piece of real estate on the court.

Given NC State’s lack of depth their margin for error is small, and it forces Barber to play major minutes while also being asked to both score and distribute the basketball. But there’s still talent at Mark Gottfried’s disposal, and when they’re clicking NC State is capable of taking advantage. Miami, which needs more from its big men moving forward, found that out the hard way.