HONOLULU (AP) Buddy Hield had 27 points and nine rebounds as No. 3 Oklahoma remained unbeaten, escaping with an 84-81 victory over Hawaii in a Diamond Head Classic semifinal on Wednesday night.

The Sooners (10-0) got a career-high 17 points from Khadeem Lattin and 14 from Isaiah Cousins.

Hield was 7 of 16 from the field, including 5 of 9 from 3-point range, and he made all six of his free throw attempts. He had 18 points at halftime.

Roderick Bobbitt scored a career-high 32 points and had six assists for the Rainbow Warriors (8-2), who had their four-game winning streak snapped. It was their first loss on their home court this season.

Hawaii had a chance to tie it at the buzzer, but Bobbitt’s desperation 3-pointer was no good.

There were six ties and 12 lead changes in the game.

The game was tied at 75 on a slicing layup by Hawaii’s Isaac Fleming with 4:22 remaining, but the Sooners took the lead for good on two free throws by Hield with 1:42 to play.

Bobbitt drew a foul attempting a 3-pointer and made his first two attempts to get Hawaii within 83-81 with 4 seconds to play. He missed the third free throw intentionally and Lattin grabbed the rebound for Oklahoma.

Lattin made the first of two free throws before Hawaii got the ball back with 1.2 seconds to play.

Oklahoma got off to a hot start as Hield scored 16 points in the first 9 minutes. Akolda Manyang’s banker with 10:42 left in the half gave the Sooners a 25-9 lead, but the Rainbow Warriors went on an 8-1 run to take the lead at 27-26.

Hawaii scored 18 points off 12 Oklahoma turnovers and held the edge in bench points, 23-10.

Both teams were 24 of 33 from the free throw line.

Oklahoma: It was the 28th time in Hield’s career that he eclipsed the 20-point mark. He had a career-high 33 points against Creighton on Dec. 19, and 25 against Washington State on Tuesday.

Hawaii: It was the highest-ranked opponent for the Rainbow Warriors since beating No. 2 Kansas in the 1997 Rainbow Classic. It is their best start to a season since winning their first eight games in 2004.

Oklahoma will play Harvard for the tournament title Friday.

Hawaii will meet Auburn in the third-place game Friday.

Wednesday night Hawai’i moved to 5-1 on the season with a comfortable 75-47 win over Arkansas-Pine Bluff, using a balanced scoring effort to take care of the Golden Lions. And as one would expect from such a beating there were highlights for the home team, most notably guard Quincy Smith’s first half drive to the basket.

After he and Roderick Bobbitt combined to force a turnover at mid-court, Smith took off towards the basket focused on throwing down a two-handed dunk. Only one problem: Smith’s right shoe fell off as he jumped to complete the play. So instead of a dunk with some kind of power it was more of a fingertip deal for Smith, but I’m willing to give him credit for the dunk.

Dunking barefoot is pretty tough, much less doing so while losing one of your shoes in the midst of jumping.

Just prior to the start of the 2014-15 season Hawai’i parted ways with head coach Gib Arnold, with an NCAA investigation into major rules violations sparking the decision. Arnold took the school to court for the remaining money on his contract, and on Thursday the school announced that the legal battle has reached its conclusion.

The school self-reported violations that were traced back to 2013, with Arnold and then-assistant coach Brandyn Akana being relieved of their duties and star forward Isaac Fotu leaving the program around the same time.The school announced its self-imposed sanctions back in mid-May. The NCAA has yet to offer a final ruling on the investigation.

Benjy Taylor took over as interim head coach as a result, leading the Rainbow Warriors to the Big West tournament final where they lost to UC Irvine. This spring Hawai’i hired former Saint Mary’s assistant Eran Ganot as the program’s new head coach. 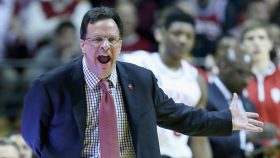 Coaches on the Hot Seat

The college basketball coaching carousel was in full effect last spring, as 40 head coaching positions changed hands. Of those 40 jobs, 12 major high major programs will enter this season with a new man in charge while six more teams that would be classified as mid-major plus had turnover in leadership.

Here are the coaches in the best position to succeed immediately, and those that will likely need some time before they see the kind of success they’re used to:

Jack Purchase, the native of Australia, has transferred to Hawaii, the university announced on Sunday afternoon.

The 6-foot-9 forward becomes the third addition for first-year head coach Eran Ganot since taking over the program in April. Purchase will have to sit out the 2015-16 season due to NCAA transfer rules and will have three years of eligibility remaining.

“We are fired up to welcome Jack to the Rainbow Warrior basketball family,” Ganot said in a statement. “Jack is well regarded for his high skill set and tremendous basketball IQ, particularly at his size. He and his terrific family are a great fit for our program, this university, and the islands. It’s no secret that Australia is a place we would like to target and for Jack to start us off there is a real shot in the arm. He comes from the very highly respected Melbourne Tigers program, where his father, Nigel, played professionally.”

Purchase was recruited by former Auburn head coach Tony Barbee. In his lone season at Auburn, Purchase played in a limited role, appearing in only seven games for new head coach Bruce Pearl. He decided to transfer in late May.

Last summer, Purchase played in the FIBA U17 World Championships for an Australian team that won the silver medal.

For some programs participating in the Maui Invitational there’s a desire to play a game on the way out to the islands in order to avoid too much inactivity before the start of the tournament. That will be the case for North Carolina, which is one of the eight teams booked for the 2016 edition of the event.

Thursday it was announced that the Tar Heels will play a road game at Hawaii November 16, 2016, which will mark the second time in a three-year period that the Rainbow Warriors get to play an ACC team headed out to Maui.

Last season Hawaii knocked off Pittsburgh in a game played in Wailuku, Maui. However the meeting with the Tar Heels will be a true home game for new head coach Eran Ganot, with the contest scheduled for the Stan Sheriff Center.

“This is a tremendous opportunity and honor to compete with one of the premier programs in all of college basketball,” Ganot said in the release. “Can’t say enough about the efforts of so many to make this happen as its not too often you can schedule an opponent of this caliber on your homecourt.

“We are thrilled to be able to bring North Carolina and their terrific, Hall of Fame Coach, Roy Williams, to the Stan Sheriff Center in front of our wonderful fans!”

North Carolina will be part of what should be a very good Maui Invitational field in 2016. Joining the Tar Heels and host Chaminade are Connecticut, Georgetown, Oklahoma State, Oregon, Tennessee and Wisconsin.

Weekly Awards: Temple, UNLV earn wins that will get them into bubble contention December 29, 2014 9:00 am

Late-game execution the difference as Hawaii falls to High Point November 18, 2014 7:42 am