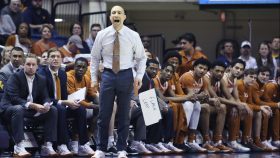 While many of the key contributors to a team that was Villanova’s greatest threat in the Big East return, Xavier has some holes to fill in the rebounding department. With James Farr and Jalen Reynolds both moving on, the Musketeers will have to account for the loss of their top two rebounders as the 2016-17 season approaches. Trevon Blueitt, who averaged 6.1 rebounds per game last season, is back, but others including Norfolk State transfer RaShid Gaston and Sean O’Mara will have to step forward for Chris Mack’s team.

Another option is 6-foot-5 forward Malcolm Bernard. Bernard, who played last season at Florida A&M after spending his first two seasons at Charleston Southern, announced Monday that he will join the Xavier program as a graduate student. He’ll be eligible to compete immediately as a result, with one season of eligibility remaining.

Well… Looks like I'm going to be a Musketeer….. I will be attending Xavier University for my final year #Team95 pic.twitter.com/yt14CulF8g

As a redshirt junior at Florida A&M Bernard averaged 14.4 points and 7.1 rebounds per game, doing the majority of his damage inside of the arc despite playing at a listed weight of just 195 pounds. Bernard also averaged 4.3 assists and 2.3 steals per game for the Rattlers in 2015-16. Adding a capable rebounder on the wing will help the Musketeers as they look to not only chase down the reigning national champions but also go further in the NCAA tournament than they did last season.

Xavier will return four starters from a team that won 28 games, and went 14-4 in Big East play, before losing to Wisconsin at the buzzer in the second round of the NCAA tournament.

When shooting guard Jordan Mathews announced in late May that he would be leaving California as an immediately eligible transfer, Gonzaga was one of the schools first mentioned as possible destinations. Thursday night Mathews announced via his Twitter account that he has indeed committed to Mark Few’s program, giving the Bulldogs another quality perimeter option in a rotation that was already loaded.

Mathews will be one of two Pac-12 transfers on the Gonzaga roster next season, with former Washington point guard Nigel Williams-Goss eligible after sitting out last season. They join returnees such as Josh Perkins and Silas Melson, and one of the top perimeter shooters in the Class of 2016 in Zach Norvell in Gonzaga’s perimeter rotation.

Mathews averaged 13.4 points per game at Cal last season, shooting 42.2 percent from the field and 41.6 percent from beyond the arc. Adding him to a rotation that will not only have talent on the perimeter but in the post as well, with Przemek Karnowski being joined by Missouri transfer Jonathan Williams III and freshmen Zach Collins and Killian Tillie, makes Gonzaga an even tougher team to slow down offensively.

Already the preseason favorites to win the WCC, Gonzaga’s chances of making a national splash (which they were already expected by many to do) are even greater with the addition of Mathews.

With Nikola Jovanovic turning pro and Darion Clark and Malik Martin both transferring out, USC entered the summer in a position where they could afford to add another front court option to help with depth. Thursday afternoon the Trojans did just that, as former Minnesota forward Charles Buggs has decided to join Andy Enfield’s program.

As a graduate student Buggs will be eligible to compete immediately for the Trojans, who return rising sophomores Bennie Boatwright and Chimezie Metu from last season’s front court rotation. News of Buggs’ decision was first reported by CBSSports.com.

Last season the 6-foot-9 Buggs averaged 5.9 points and 2.9 rebounds per game for Minnesota, shooting 46.2 percent from the field and 3.19 percent from beyond the arc. His best scoring output came in a win over Clemson in the Big Ten/ACC Challenge, scoring 15 points, and from a rebounding standpoint his season high of ten came in a loss to Temple in mid-November.

With USC having the aforementioned Boatwright and Metu, not to mention highly regarded incoming freshman Harrison Henderson and another newcomer in Nick Rakocevic, Buggs will simply have to fit into the rotation as opposed to being asked to play a starring role. He gives USC some additional experience in the front court, something they lost with the departures of Jovanovic and Clark. 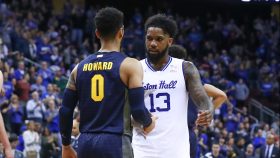 Player of the Year Power Rankings: Powell vs. Pritchard vs. Howard vs. Toppin

Less than two weeks after enrolling at La Salle as a graduate student, a front court player expected to bolster the Explorers’ depth in 2016-17 has left the program.

Thursday afternoon the program announced that Savon Goodman, who most recently played at Arizona State, had withdrawn from classes for personal reasons. No further information was given regarding the Philadelphia native, who averaged 9.6 points and 6.4 rebounds per game last season.

Goodman began his career at UNLV, where he played one season before being dismissed from the program prior to the 2013-14 season. From there it was a one-year stop at Indian Hills CC, where he did not play so as to preserve a season of eligibility at the Division I level. Goodman played two seasons at Arizona State and was to use his final year of eligibility at La Salle.

Without Goodman, head coach Dr. John Giannini still has options to call upon in the front court, including returnee Tony Washington and newcomers Demetrius Henry and Cian Sullivan.

Player of the Year Power Rankings: Powell vs. Pritchard vs. Howard vs. Toppin

With many of the key perimeter contributors from Memphis’ 2015-16 team out of eligibility, new head coach Tubby Smith and his staff had some work to do to fill out their roster on the recruiting trail. Thursday afternoon the program received a commitment from guard Christian Kessee, who last season played at Coppin State and will be eligible to compete immediately as a grad student.

Kessee took to Twitter to make the announcement, and it comes just a couple days after he took an official visit to the Memphis campus.

As a junior the 6-foot-2 Las Vegas native averaged 14.6 points and 2.5 rebounds in 32.5 minutes of action per game for the Eagles, shooting 39.0 percent from the field and 39.5 percent from beyond the arc. He’ll join a perimeter rotation that includes rising sophomores Randall Broddie, Craig Randall II, Jeremiah Martin and Dante Scott and redshirt junior Markel Crawford.

Of that quintet the most experienced returnee is Crawford, who made 25 starts and averaged 5.3 points in 20.2 minutes per game.

Memphis is still awaiting a decision from forward Dedric Lawson, who’s currently at the NBA Draft Combine in Chicago. Lawson, who was the American Athletic Conference’s top freshman last season, has not hired an agent and would have until May 25 to withdraw from the Draft in order to return for his sophomore campaign.

With student-athletes who have completed their undergraduate degree with eligibility remaining being allowed to transfer without having to sit out a season, graduate students have become popular transfer candidates in recent years. But with that rise in transfers has come some skepticism, with some coaches complaining of other programs reaching out to players before they’re officially able to transfer and others wondering just how much progress is being made towards a masters degree.

Friday the NCAA’s Division I Committee on Academics released its recommendations on how to address the issues surrounding graduate student-athletes, with an eye towards making sure that these athletes are making true progress towards a postgraduate degree.

Among the recommendations are requiring graduate student-athletes to declare a specific graduate degree program, and requiring that they complete at least six credit hours per semester. At present time grad student-athletes aren’t required to declare which degree they’re seeking or a major, and they only have to be enrolled in six credit hours as opposed to completing said hours.

According to the release only 35 percent of men’s basketball players making use of the program have completed their postgraduate degree, slightly lower than the 38 percent of football players who do so.

One suggestion made by some coaches in the past is that graduate students be made to sit out the year in residency required of undergraduate transfers, and that may very well occur in the future. But based upon the NCAA’s announcement the course of action at this point is to make sure those who do transfer as grad students are doing so without pushing the academic portion of the process to the back burner.

Will these recommendations, if approved, change anything? I’m not sure, but it may lead to more of those athletes simply deciding to move on with their bachelor’s degree in hand as opposed to sticking around.

Former Providence forward headed to Auburn for final season of eligibility May 15, 2015 6:00 pm

Waiver from Big Ten adds to possibilities for former Michigan forward May 14, 2015 8:32 pm

Former Alabama forward headed to UTPA for final season of eligibility May 2, 2015 7:41 pm