Oregon is returning to the Elite Eight for the second consecutive season following a thrilling, 69-68, victory over No. 7 Michigan in the Sweet 16 in Kansas City on Thursday night.

In a game in which neither team could fully grasp control of the game, it came down to the wire. Michigan held a 3-point lead with two minutes to play. Jordan Bell, who was unquestionably the deciding factor in this contest, came up with the first of several critical hustle plays down the stretch. He knifed in on a missed free throw, for the second-chance bucket, cutting the deficit to one.

On the ensuing Michigan possession, Bell didn’t block it but affected Derrick Walton Jr.’s shot enough to force the miss. Tyler Dorsey, the other hero for the Ducks, continued his stellar play this month with a go-ahead layup after he spun through the Wolverine defense. Bell’s close out on D.J. Wilson sent his 3-point attempt way off the mark. Bell would corral another offensive rebound on the other end of the floor, and while Dylan Ennis left the door open for Michigan following another missed free throw, Bell, deservedly, rebounded Walton’s miss as time ran out.

“Do whatever you can to win,” Bell told reporters after the game. “Me, get every rebound, offense or defense, help my team out as much as possible.”

Bell had 16 points and 13 rebounds. Tyler Dorsey poured in 20 points. Walton Jr., who front-rimmed a potential game-winner at the buzzer, ended his collegiate career with stat-line of 20 points, eight assists, and five rebounds. Zak Irvin added 19.

Dillon Brooks is without a doubt the star, but Bell and Dorsey round out a big three that could lead the Ducks to Phoenix.

Before the start of the Pac-12 Tournament championship game on March 11, Oregon announced that Chris Boucher would miss the remainder of the season with a torn ACL. How would this effect Oregon’s defense days before it began its quest for a Final Four?

Bell has helped answer those questions on Thursday night. He’s a big reason why Oregon outscored Michigan, 34-16, in points in the paint. But his greatest impact was how he slowed down the two-headed monster of Moe Wagner and D.J. Wilson, two forwards whose increased production is a big reason why Michigan’s unlikely run extended into the second weekend of the tournament. The duo scored a combined 19 points off 7-of-20 shooting.

The other for Oregon was the continued offensive tear of Dorsey. In six postseason games, the sophomore two-guard is averaging 23.0 points per game. He went toe-to-toe with Walton, who was playing as good as any guard in the country, in the final minutes and got the better of the battle. Playing at this level, Oregon has another go-to scorer, one who has no issue taking a big shot late in the game. In either matchup in the next round, that should come in handy. Dillon Brooks, one of college’s toughest matchups, will either be busy with Purdue’s massive frontline or locked in an all-out war with Kansas’ Josh Jackson the perimeter.

“I’m really fortunate to have Jordan for three years and Tyler for two and Dillon Brooks,” Oregon head coach Dana Altman said. “We’ve just been really fortunate. We’ve got good players and guys that are unselfish. They want to win. They’re competitive. We got down four there and guys could have gave into it. They didn’t. They fought their way back. Shows you what kind of competitive spirit they’ve got.”

The Ducks, the No. 3 seed in the Midwest region, will face the winner of top-seeded Kansas and No. 4 Purdue on Saturday night at the Sprint Center.

“We know Purdue is really big and Kansas is Kansas,” Altman said.

Dillon Brooks may have a balky foot, but it’s not stopping him from throwing down on dudes.

The Oregon junior viciously dunked on 6-foot-10 UCLA freshman Ike Anigbogu early in the top-10 matchup between the Ducks and Bruins at Pauley Pavilion on Thursday.

Brooks missed all of the summer and the start of the year due to surgery on his foot, and then missed time when he sprained it last month.

He looks to be fine now, though.

Oregon defeated Cal on Thursday. The score was 86-63. That hardly matters, though, considering what else occurred in Eugene.

Ducks star Dillon Brooks left the game with a “lower left leg injury,” which is particularly ominous considering it was a surgically repaired left foot that sidelined Brooks all summer and kept him from joining Oregon on the floor until mid-November.

As of Thursday evening, there was no specific clarification, leaving only questions not only about Brooks’ health but what Oregon will have to potentially do without him.

Altman said Dillon Brooks be evaluated next couple days. No update beyond that.

The Ducks can win without Brooks. They went 8-1 before Brooks ever logged 30 minutes in a game and blasted Washington State in Pullman when Brooks got ejected after just seven minutes. They didn’t need him to dismantle the Bears, shooting 58 percent from the floor for the game and 54.2 percent without him in the second half. Jordan Bell made 11 of 12 shots for a career-best 26 points, and three other Ducks scored in double figures.

It wouldn’t be ideal, but Oregon could tread water to a high seed with him missing a chunk of time as they’ve shown at different times throughout this season. The Ducks only have one matchup left with both UCLA and Arizona, coming back-to-back in the first week of February.

But if it’s a serious injury, it necessitates a recalibration of expectation for Oregon.

Brooks scored 23 and had the game-winner as the Ducks handled No. 3 UCLA its lone loss this season and had 28 points when they blew out then-No. 22 USC to end December. Brooks is too talented, too versatile and too important for a prolonged absence to be meaningfully weathered. The NCAA tournament just too often demands too much from teams to be without a player of Brooks’ caliber.

For Oregon to reach the heights that many predicted for it since last spring, Brooks has to be on the floor.

The wait for the diagnosis and prognosis, not just for Brooks but for Oregon’s season, is on. 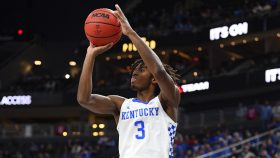 This week, for the first time all season, Oregon looked like the team that we all had projected in the preseason top five and as a potential Final Four contender. They beat No. 2 UCLA at home, putting an end to their undefeated run this season, before blowing out No. 22 USC on Friday, who also entered that game without a loss on their résumé.

There were a handful of things behind Oregon’s improvement – the Ducks started shooting the ball well from the perimeter, Dylan Ennis played as well as he has all season, they finally had their full complement of players all healthy at the same time – but the biggest difference between this Oregon and the Oregon that lost to Georgetown and got blown out by Baylor is simple: Dillon Brooks looked like Dillon Brooks again.

And should I mention that he hit the game-winner with 0.7 seconds left to beat the Bruins?

Those games were just the third and fourth games, respectively, that he has started this season due to a slow recovery process coming back from an offseason foot injury. Early in the year, he was still working on getting back in shape and getting his legs under him. I’d say that, at this point, we can pretty safely say that Brooks is back to 100 percent, and when he’s healthy, Oregon is good enough to win the Pac-12.

THEY WERE GOOD, TOO

The good news for Oregon is that they should be getting their all-american Dillon Brooks back this week.

The expectation is that Brooks will give the Ducks around 10 minutes off the bench.

“We will play Dillon on the exact schedule the doctor gives us,” Altman said. “You have to gradually come back.”

Brooks is a preseason all-american that averaged 16.7 points for the Ducks last season. He has been out with a foot injury since the summer.

The Ducks mustered all of 49 points in a 17 point loss at Baylor last week.

The fourth-ranked Ducks fell to the unranked Bears, 66-49, in Waco on Tuesday afternoon to take an early blemish with their All-American junior still sidelined with a foot injury.

Oregon (1-1) was stifled offensively throughout the game shooting 32.8 percent from the field and 14.3 percent from 3-point range as the Ducks made just three of their 21 attempts from beyond the arc.

Certainly, the Bears (2-0) deserve plenty of credit for putting the clamps on Oregon as their zone has confounded plenty of programs over the years with its length and unpredictability. It’s one of the most unique defenses in the sport, and certainly not easy to prepare for, especially for the first time.

Baylor’s performance looks even less dependent on Oregon’s personnel when Johnathan Motley goes for 17 points and seven rebounds, looking like an All-American, and Manu Lecomte adds 18 points and seven assists, looking like the point guard the Bears desperately need this season. Jo Lual-Acuil is asserting himself as a major asset in that zone with seven blocks.

This, without a doubt, was an early statement win for Baylor.

Still, it’s impossible not to wonder how large Brooks’ absence loomed. You remove a 16-point scorer who shot 47 percent overall and 33.8 percent from 3-point range plus who has the size to combat Baylor’s, it’s going to make things more difficult. Tyler Dorsey was just 4 of 14 from the floor while Dylan Ennis went 5 of 13.

This is without question a more important result for Baylor than it is for Oregon. The Bears get credit because they looked so strong, but the Ducks won’t be fully docked given Brooks was unable to suit up.

And the good news for Oregon is it sounds like Brooks will be back in action before too long. Fran Fraschilla, who was in Waco to call the game for ESPN, tweeted he believed Brooks would be ready to go within a week after watching him practice.