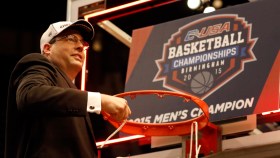 Today, we are previewing the Ohio Valley Conference.

The Ohio Valley Conference Tournament championship game didn’t lack any drama. Taylor Barnette drilled a 3-pointer with 3.2 seconds left to send the Belmont to the NCAA tournament for the fourth time in five years. It handed Murray State, which was undefeated in conference play, an invitation to the NIT.

The Bruins and Racers are expected to top their respective divisions again this season despite going through two very different offseasons.

Belmont head coach Rick Byrd, entering his 30th season, brings back four starters. Barnette, the OVC Tournament MVP and Craig Bradshaw, the Ohio Valley Preseason Player of the Year, make up the conference’s top back court, while Evan Bradds mans the frontline after a breakout sophomore season. Belmont is one of the nation’s best mid-major programs year-after-year, and that shouldn’t change this season.

Murray State, however, experienced an offseason of change. In April, Cameron Payne left for the NBA, becoming a lottery pick that will continue his career alongside Kevin Durant and Russell Westbrook. Then in June, head coach Steve Prohm left to take over the Iowa State program. Despite the coaching change and the loss of three of its top four scorers, Murray State remains a contender in the OVC. First-year head coach Matt McMahon has an all-OVC caliber guard in Jeffery Moss, the lone returning starter. Justin Seymour also returns, but the perimeter will be enhanced by the additions of Texas transfer Damarcus Croaker, Chattanooga transfer Gee McGhee and JuCo transfer Bryce Jones.

Even after graduating two all-OVC players, McHale and the Colonels could still be Belmont’s toughest challenge in the East Division, relying on the returning back court of Ja’Mill Powell and Isaac McGlone. Morehead State won five of its last six games, narrowly losing to Murray State in the OVC Tournament semifinals, to close out 2014-15. The Eagles could build of last season’s strong push with Brent Arrington returning to lead the team’s hard-nose defense. But Jacksonville State poses as a deep sleeper, a cast of newcomers headlined by well-traveled forward Cameron Biedscheid.

UT Martin, coming off one of the better turnarounds in the nation a season ago, will likely be Murray State’s toughest competition in the West Division. Twymond Howard and Alex Anderson make up a solid 1-2 punch, while Myles Taylor, another double-digit scorer, returns from a shortened 2014-15 season. Chris Olivier transferring hurts Eastern Illinois up front, but Trae Anderson and Cornell Johnston should be enough to keep the Panthers in play this year.

One of the best mid-major players in the nation, Bradshaw is coming off a junior campaign of 18.3 points, 3.8 rebounds and 3.1 assists per game, shooting 42 percent from behind the 3-point line. An intense competitor, the 6-foot-3 senior had arguably his best game against one of the nation’s premier defenses, scoring 25 points (10-of-19 shooting) and nine rebounds against Virginia in the NCAA tournament.

THE REST OF THE PRESEASON OHIO VALLEY CONFERENCE TEAM:

The “Chase for 180″ is back for a second year, and for those who may not be familiar with the project it’s our attempt to identify some of the best shooters in America. But what makes one an “elite shooter?” For some it’s merely the ability to knock down perimeter shots at a high rate, but that isn’t the case for all players. High-level shooting requires proficiency from three, the field overall, and from the foul line.

To read prior installments of the Chase for 180, click here.

With the loss of their top three scorers from a team that won 25 games a season ago, Ohio State had some questions to answer heading into the 2014-15 campaign. Freshman guard D’Angelo Russell has emerged as the team’s primary scoring option, with Shannon Scott being the team’s best distributor and the athletic Sam Thompson emerging as a double-digit scorer in his final season.

While the addition of Russell has been the biggest key for the 22nd-ranked Buckeyes, it progression of sophomore forward Marc Loving is another reason why they’re 13-3 overall and 2-1 in the Big Ten.

To describe Loving as a bit player last season would be accurate, as he accounted for 4.4 points and 1.7 rebounds in just over ten minutes of action per game. With the departure of leading scorers LaQuinton Ross, Lenzelle Smith Jr. and Aaron Craft it was obvious that more scoring opportunities would be available, and to Loving’s credit he’s taken full advantage thus far. Loving’s now averaging 12.3 points per game, shooting well from the field (52.1%), from three (54.5%) and from the foul line (83.3%).

Those numbers are all far superior to what Loving posted as a freshman, as he’s shown himself to be capable of not only handling an increased workload but also doing so in an efficient manner. Loving’s true shooting (up to 69.8% from 51.2%) and effective field goal (66.4% from 43.2%) percentages have increased substantially, and per hoop-math.com the sophomore has also improved his field goal percentage around the rim by some 24 percentage points (69.2% after making 45.2% of those shots last season).

As a result Loving’s scored in double figures in 13 of Ohio State’s 16 games, which includes a current streak of seven straight with the sophomore scoring 13 in the Buckeyes’ 74-72 overtime win at Minnesota Tuesday night. By comparison Loving reached double figures just four times all of last season, with two of those games coming in Big Ten contests in early January. The strides made between his freshman and sophomore seasons have positioned Loving as a player the Buckeyes have no issue giving scoring opportunities to, even if he isn’t their primary scoring option.

Tuesday night, that confidence resulted in a game-winning basket.

It simply does not get any better than the week that Craig Bradshaw just had. In three games — all Belmont wins — Bradshaw averaged 33.0 points while shooting 58.2% from the floor and 58.6% from three. Those are absurd numbers, but they didn’t come against no-names. Belmont knocked off intra-city rival Lipscomb for the second time this season, following that up with wins against two of the country’s best mid-major programs in Denver and Ohio.

It still gets better. The win against Ohio came on the road, and Bradshaw just so happened to hit the game-winner on Saturday:

Belmont looks like they will once again be a favorite to win their league despite the fact that leading scorer J.J. Mann has graduated. Rick Byrd always has a never-ending line of talented scorers coming through the ranks.

Team of the Week: Kansas Jayhawks

This was the bounce back that the Jayhawks needed. After getting utterly embarrassed against Kentucky in the Champions Classic, Kansas went down to the Old Spice Classic in Orlando and picked up three wins, including a hard fought victory over a good Michigan State team. Perry Ellis led the way, averaging 19.3 points and 9.0 boards, and Cliff Alexander started to looked like the Cliff Alexander that was a top five recruit.

Kansas still has a ways to go, however. Frank Mason looks like he’s coming along at the point, and Svi Mykhailiuk is probably the best option on the wing. But until Wayne Selden works through his shooting issues and Devonte’ Graham and Kelly Oubre find a way to be significant contributors, this team can only go so far.

Saturday afternoon Belmont and Ohio staged one of the best games of the day, and it was to be expected with both teams expected to factor into their respective conference races this season. Belmont’s Craig Bradshaw scored a career-high 42 points on Saturday and the Bruins needed every one of those points as the Bobcats were their equal throughout.

Bradshaw’s final two points decided the game, as he went the length of the court before dropping a floater over Ohio’s Treg Setty with two tenths of a second remaining (it can be seen at the 1:20-mark in the video above). Bradshaw’s 42 points are also a Division I-era program record. Javarez Willis scored 25 points to lead the way for Ohio, and tough basket with seven seconds remaining tied the game at 81 apiece.

The Ohio Valley is one of the few conferences that is still broken up into divisions, and the most interesting of the two divisional races this season will be in the east.

Belmont has been one of the best mid-major programs in the country under head coach Rick Byrd. In the last nine years, the Bruins have won seven regular season titles and six conference tournament titles despite playing in two different leagues. Byrd has done it by building a program that slowly-but-surely develops the guys on the team into stars at this level, which is why he should feel complete confidence in Craig Bradshaw filling in for J.J. Mann.

Belmont’s issue will be in the front court, where they have to replace both starters — as well as “Big Chad” Lang — which is part of the reason why I think that Morehead State will win the East Division. Sean Woods returns four starters from last year’s 20-win team, including his entire back court. It’s headlined by Angelo Warner, a 6-foot-2 senior that averaged 17.5 points a season ago, numbers that could bump up this season if he shoots better than 32.6% from three. With a handful of Division I transfers and a number of JuCo imports joining the ranks this season, Woods will have the depth, particularly in his back court, to make Morehead’s full-court press quite lethal.

While those two programs battle it out supremacy in the East, Murray State looks like they are clearly the team to beat in the West. It starts with Cam Payne, a 6-foot-2 sophomore who came out of nowhere to become one of the best freshman in the country (more on him in a bit). He’s not alone, however, as Steve Prohm returns four starters, including workhorse forward Jarvis Williams, Jeffery Moss and Clemson transfer T.J. Sapp, who should be even better this year after missing the first half of last season. Throw in Utah transfer Justin Seymour, and the Racers should be better than the team that went 13-3 in the league and won the CIT. Remember, they were supposed to be a year away last season.

Eastern Kentucky loses a number of key pieces from last season, including Glenn Cosey, but with Corey Walden and Eric Stutz back, the Colonels should be a factor. Southeast Missouri State will be without Tyler Stone and Lucas Nutt, but they bring back three starters, including Jarekious Bradley, and look like the second-best team in the West. One team to keep an eye on: SIU-Edwardsville. They return four starters and their top six scorers from a team that went 7-9 in the league last year. With five seniors on the roster, if they are going to make a move, this is the year to do it.

Cam Payne played out of position throughout his freshman season, filling a role that was left vacant when Zay Jackson blew out his knee. But it didn’t matter, as the 6-foot-2 Memphis native finished the year averaging 16.8 points, 5.4 assists and 1.7 steals while making Racer fans quickly forget about Isaiah Canaan.

THE REST OF THE PRESEASON ALL-OHIO VALLEY TEAM: