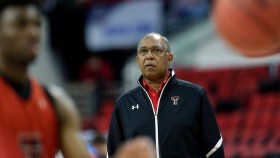 Another Division I head coaching vacancy was filled Monday afternoon, as Cornell announced that it has hired Princeton associate head coach Brian Earl as the 22nd head coach in program history.

Earl, who also played at Princeton under Pete Carril (1995-96) and Bill Carmody (1996-99), spent the last nine years as an assistant at Princeton under Sydney Johnson (2007-11) and Mitch Henderson (2011-16). Earl fills the vacancy left by the departure of Bill Courtney, whose contract was not renewed after six seasons at the helm.

Courtney took over a program that made three consecutive trips to the NCAA tournament under Steve Donahue, the last of which being a Sweet 16 appearance in 2010. But he was unable to build on that momentum, with the Big Red winning no more than 13 games in any of Courtney’s six seasons in charge. This year Cornell went 10-18 and opponents averaged just over 78 points per game.

Among the players Earl will have to work with next season are guards Matt Morgan and Robert Hatter, who combined to average 36 points per game in 2015-16. While Hatter will be a senior next season Morgan will only be a sophomore, giving the new head coach a quality talent to build his program around if he so chooses.

Earl’s hiring at Cornell comes just over two weeks after he was promoted associate head coach at Princeton.

There are just seven games on the schedule tonight, and there’s no doubt that the battle between the Vikings and Phoenix is the best matchup. Both enter the game with 10-3 records in Horizon League play, and the winner will keep alive hopes of catching 11-2 Valparaiso. That can be important, as the regular season champion gets to host the second round and semifinals with the highest remaining seed hosting the title game. Cleveland State won the first meeting January 31, holding serve at home thanks to the tandem of guard Trey Lewis and forward Anton Grady.

Lewis accounted for 25 points and 12 rebounds on that night, with Grady adding 24 points and six rebounds. Slowing those two down will be critical for Green Bay, as their production was a big reason why Cleveland State shot 56.8% from the field. Another key in that game: Gary Water’s Vikings outscored Green Bay 21-6 from the foul line. Keifer Sykes was limited to 11 points in that game, and he finished with more turnovers (two) than assists (one). That can’t be the case in the rematch.

Yale (7-1) is currently tied with Harvard atop the Ivy League standings, with the Crimson hosting Penn in Cambridge. Of the two opponents the first-place teams face Cornell’s the greater threat, thanks to the presence of senior forward Shonn Miller. Miller (16.1 ppg, 8.3 rpg) currently leads Cornell in both scoring and rebounding, and his matchup with Yale’s Justin Sears will be worth the price of admission. Yale was able to keep Miller in check in the first meeting, a seven-point Bulldog victory, as he scored 15 points on 6-for-20 shooting to go along with 11 rebounds.

TWO THINGS TO WATCH FOR

1. Iona looks to move one step close to another MAAC regular season title, as they visit Marist (9:00 p.m., ESPNU). The Gaels have won eight straight games, thanks to a prolific offense and improved play on the defensive end.

2. Albany dropped its first conference game of the season on Monday, but thanks to Vermont’s stunning loss at Binghamton they still lead America East by two games. The Great Danes host Hartford (7:00 p.m., ESPNU), and a win would wrap up at least a share of the regular season title.

THE REST OF FRIDAY’S SCHEDULE

Cornell just had to inbound the ball and take a foul and make some free throws leading by one with 4.8 seconds left to help close out a victory. Instead, the Big Red made an errant inbounds pass that turned into a Penn State game winner as senior guard D.J. Newbill made the go-ahead lay-up as time expired to give the Nittany Lions a win in the Charleston Classic consolation bracket.

Newbill finished with 26 points on 9-of-16 shooting, 4-of-5 from three, six rebounds and four steals against Cornell on Friday night after playing 50 minutes the day before in a loss to Charlotte.

With the win, Penn State moved to 3-1 on the season.

On Tuesday, Cunonzo Martin adding to his first recruiting class at Cal, landing a commitment from Cornell graduate Dwight Tarwater.

The 6-foot-6 Tarwater will enroll in a public health master’s program at Cal, and will be eligible immediately. This news was first reported by Jon Rothstein of CBS Sports.

“I’ve known that I’ve wanted to go to Cal for a while,” the Knoxville native told the Knoxville News Sentinel on Tuesday night. “I actually just received my letter of acceptance today.”

Tarwater averaged 7.1 points, 5.5 rebounds and 1.0 assists in 26 minutes per game for the Big Red, who finished last in the Ivy League.

“Coach Martin looked at a lot of (Cornell) games this year when we played a lot of high majors, and he thought that I performed really well against those types of teams.”

He joins an incoming class that includes 7-foot-1 center Kingsley Okoroh, who followed Martin from Tennessee to Berkeley, and point guard Brandon Charuca.

The game was never in question. Louisville jumped out to a 22-2 advantage in the early stages of the first half to put Cornell away early, ultimately winning 99-54.

The story of the night, however, was Kevin Ware’s return to the floor. Ware played 13 minutes and scored just five points, but to see him effortlessly running certainly was encouraging. He was 2-3 from the floor, and pulled down three rebounds to go along with two assists.

It wasn’t just seeing Ware back on the floor, it was how he moved out there. He drove to the basket without any hesitation and looks to be back at 100% — in fact, it’s safe to say he is without a doubt because Rick Pitino wouldn’t let him touch the floor if he wasn’t at full-go.

While Ware was the story for the sole fact that he is back, Wayne Blackshear and Montrezl Harrell led the way. Blackshear had 20 points on just eight shots; he was 4-6 from 3PT. Harrell had just seven points, but corralled 14 rebounds.

More than anything, what makes this Cardinal team so potent is just how deep they are. Having Chane Behanan, Luke Hancock, and Kevin Ware all coming off the bench tonight bodes well for the rest of the season. Given the pressing nature of Rick Pitino’s defense, having depth is an absolute must. Fifth year senior Stephan Van Treese, who has been nothing more than a role player for his career, contributed 10 points and seven rebounds.

Van Treese was used to spell Gorgui Dieng last year, and he filled that role nicely. Still, he has flown under the radar with many focusing on Behanan and Harrell ahead of him. Van Treese won’t be counted on to score, but he’s active on defense and a strong rebounder.

The one downside — if you can find one in a 99-54 victory — was Louisville’s shooting at the free throw line, where they were just 18-32.

Louisville next plays at home against Hartford on Tuesday.

Shonn Miller missed the final four games of the 2012-13 season with a shoulder injury. Despite having the summer months to get healthy, the same shoulder continues to nag Miller, and there’s a strong chance he will miss the entire 2013-14 season.

From Cornell’s preseason prospectus which was released last week: “…[R]eturning first-team All-Ivy League forward Shonn Miller continues to recover from an injury that has left him sidelined throughout the preseason.”

Miller is a menace on both ends of the floor and a real stat-stuffer. In fact, Miller accomplished something that only one other player in college basketball did last season:

It’s easy to see what a game-changing type of player Miller is and how important he is to the success of Cornell; he was named to the First Team All-Ivy in 2012-13 and the Rookie of the Year in 2011-12. In fact, the Big Red lost the final four games of last season with Miller watching from the sidelines.

Given the recurring injury and the fact he has missed practices, it is almost a certainty that Miller will miss the non-conference portion of Cornell’s schedule. Based upon reports from the Cornell Basketball Blog, there’s a strong chance Miller will miss the entire season:

Shonn Miller is out…and you should not expect him back this season. Likely red-shirt.

Embarking on his fourth season at Cornell, Bill Courtney has yet to finish above .500, and if he was to have any shot at eclipsing that mark, Miller needed to be healthy for season. However, Courtney is bringing in some highly touted recruits, and should have a team that will be in line to contend for the Ivy League title in 2015-16, especially if Miller elects to redshirt and return for two more seasons.

Hypothetically speaking, if Cornell looked like a true contender in the Ivy Legaue this season, perhaps Miller would try and return once league play begins. Yet, with the next two seasons shaping up as good ones for Cornell, it wouldn’t be a surprise if Miller redshirts for 2013-14 and has two years left of eligibility remaining.

While losing Miller is devastating for the coming season, it actually may work to Cornell’s advantage in subsequent seasons.