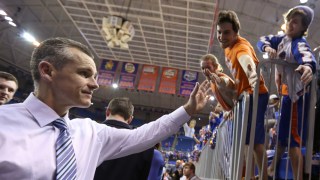 Eric Konkol, the longtime assistant for Jim Larranaga, will reportedly take the reins of his own program.

Jeff Goodman of ESPN and Gary Parrish of CBS Sports reported just after midnight on Sunday that Konkol had agreed to terms to become Louisiana Tech’s head coach.

Konkol will replace Michael White, who filled the vacancy at Florida after future Hall of Famer Billy Donovan jumped to the NBA.

Parrish reported that North Florida’s Matt Driscoll, Oklahoma assistant Steve Henson and Baylor assistant Jerome Tang were among the other candidates. Current and former Louisiana Tech players had used social media to push for assistant coach Dusty May to get the job.

Konkol has served as an assistant for Larranaga at both Miami and George Mason.

How athletic directors handle head coaching searches is one of the more interesting aspects of collegiate athletics. With the rise of search firms, some lean upon those outlets to not only establish connections but also narrow down the field of possible candidates for the opening.

But not all athletic directors use firms to do the legwork, either doing the work themselves or with the aid of a committee consisting of others within the athletic department and school community. Florida athletic director Jeremy Foley had a committee to help him through the process following Billy Donovan’s decision to take the Oklahoma City Thunder job, but this search began to take shape even before Donovan made the move.

Even with season-ending injuries to reigning MVP Kevin Durant and defensive whiz Serge Ibaka, rumors that OKC coach Scott Brooks’ job was in jeopardy had been circulating for months and that Donovan, with his brilliant offensive acumen, would be attractive replacement. Thunder general manager Sam Presti, along with his metrics analyst Oliver Winterbone, who served from 2010-14 as Donovan’s video coordinator, had visited Gainesville in February and attended Gators practices, shoot-arounds and a couple games.

They likely weren’t there four days to scout Chris Walker.

The Thunder’s regular season ended April 15, as the team missed the playoffs via a tiebreaker with the New Orleans Pelicans. Speculation immediately amped regarding Brooks’ job, which meant the Gators further readied their just-in-case list of coaches in the likely event OKC came after Donovan.

The full story of how Florida made its decision can be read here.

Billy Donovan is on his way to Oklahoma City.

On Thursday, Donovan and the Thunder agreed to a deal that will make the former Florida head man the new coach in Oklahoma City. The deal is for five years, according to Yahoo Sports. Donovan is close with Oklahoma City general manager Sam Presti, who has hired two former Florida staffers to work in his organization.

Frankly, this was an easy decision for Donovan to make. It’s not a secret in the coaching community that he’s wanted to try his hand at coaching at the NBA level, and he’ll never get a better opportunity than the one in front of him now. Who wouldn’t want to coach Kevin Durant, a top four player in the world, and Russell Westbrook, who isn’t that far behind?

The question now: Who will be Donovan’s replacement? And just how good of a job is Florida?

The two popular names for the job: Xavier head coach Chris Mack and Dayton head coach Archie Miller. It also should be noted that Donovan’s current staff at Florida has two recent SEC head coaches on it, former Alabama head man Anthony Grant and former Arkansas coach John Pelphrey, although they may be on their way to Oklahoma City as well. Minnesota head coach Richard Pitino’s name is one that has popped up in the conversations I’ve had about the opening. The elder Pitino was Donovan’s head coach back at Providence. I’ve also heard Louisiana Tech’s Michael White, Duke assistant Jeff Capel and even Rhode Island’s Danny Hurley mentioned.

It’s worth noting here that Florida likely won’t be throwing around $4 million a year. Their new head football coach Jim McElwain makes $3.5 million annually, and that was after he chipped in $2 million of his own money to help with his buyout at Colorado State. The SEC’s three major hires in the last two seasons — Bruce Pearl at Auburn, Ben Howland at Mississippi State and Rick Barnes at Tennessee — all make a little more than $2 million a year, and many believe that’s roughly what Florida will spend to make their basketball hire.

So can Florida actually generate interest from someone like Gregg Marshall? That remains to be seen. Marshall wasn’t lured by the blank check that Alabama had to offer him and signed an extension with Wichita State worth $3.3 million annually in a place where he A) is treated like a king, and B) will never, ever be fired. Marshall might have taken the Texas job if it was available to him, but is Florida on the same level as Texas?

It’s a top 25 job at this point — that’s not even debatable — between the sustained success that they’ve had, the amount of talent in the state and the relative lack of pressure to win in hoops at a football school. But it will be interesting to see just how much of that was a result of Donovan and how good of a coach he is. In other words, was it Donovan that was a consistent Final Four contender that routinely courted McDonald’s All-Americans more than it was the Florida program?

The good news for whoever eventually takes over the program is that there are plenty of pieces currently available on the roster.

Senior Dorian Finney-Smith will be back, as will former five-star prospect Alex Murphy. Kasey Hill and Chris Chiozza will return in the back court, while sophomore wing Devin Robinson is back and big man John Egbunu is now eligible. Throw in redshirt freshman Brandone Francis and a solid four-man recruiting class — Kevaughn Allen, Noah Dickerson, Keith Stone and Kevarrius Hayes — and the cupboard is far from bare in Gainesville.

The pieces are there for the Gators, who are coming off of a 16-17 season, to get back to the NCAA tournament in their first season in nearly two decades without Donovan.

Early Wednesday if was reported that Billy Donovan and Oklahoma City had begun discussions regarding the head coaching position left vacant after the Thunder fired Scott Brooks. Things have progressed throughout the day, as late Wednesday night ESPN.com reported that the two sides are “nearing an agreement” a multiyear deal.

This is not the first time that Donovan has had overtures from the NBA level, as he accepted and then turned down the Orlando Magic head coaching position back in 2007. Many in the college coaching community have believed that this would finally be the year where Donovan made the jump.

Oklahoma City general manager Sam Presti has hired a pair of former Donovan staffers already — Mark Daigneault as a D-League head coach and Oliver Winterbone as a data analyst with the organization.

Donovan will turn 50 next month, having spent the past 21 years as a head coach at the college level. He’s been with Florida since 1996, winning national titles in 2006 and 2007, but this past season, when the Gators finished 16-17 overall, was the first since 1998 in which they did not participate in the postseason.

On Wednesday morning, Kevin Ollie released a statement saying that he has “no plans to pursue other opportunities”.

The key word there is “plans”, as plans can always change. Ollie left himself an out.

Turns out, that was convenient, as that statement happened to come just a few hours before news broke that Oklahoma City would be firing head coach Scott Brooks, meaning that the job coaching Kevin Durant and Russell Westbrook was open. Given Ollie’s NBA pedigree and his relationship with the two superstars, his name immediately show up to the top of the list of potential replacements.

None of that is a surprise.

What may be, however, is the fact that Ollie appears to have told the Thunder thanks, but no thanks. According to a report from CBSSports.com, Ollie has removed his name from consideration for the Oklahoma City gig and, as he alluded to in his statement, will be returning to UConn for the 2015-16 season.

But let’s put this into context, shall we?

Because there’s a reason for Florida fans to be nervous here.

Yesterday, NBA insider Adrian Wojnarowski tweeted the following: “Here’s thing with Donovan and Ollie: If OKC talks to one of the coaches first, expect the other to pull out of consideration — and fast.”

That post was less than 24 hours old as of the posting of this story.

I’ll file that under “just sayin'”.

Which college coaches are getting linked to NBA head coaching jobs? April 16, 2015 3:58 pm

Florida guard will miss at least a few games with foot injury as team hopes for positive news November 22, 2014 11:30 am

Early season turmoil was a blessing in disguise for Florida April 4, 2014 5:36 pm