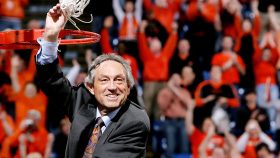 While the majority of summer tours in college basketball consist of teams making the trek overseas (or to Canada) together, there are all all-star teams put together to represent a conference or some other entity. The Pac-12 has put together an all-star team of sorts in recent years, and on Tuesday they announced the 12-member squad that will visit Australia to play three games in early July.

Two of those games will be played against the Australian men’s national team, which will be preparing for the Summer Olympics to be played in Rio de Janeiro, Brazil in August.

The coaching staff will be led by Mike Montgomery, who led the programs at both Stanford and California before retiring in 2014, with former Stanford head coach Trent Johnson and former Stanford players Casey Jacobsen and Brevin Knight serving as his assistants. Ten of the conference’s 12 teams will be represented on the roster, with Oregon (which has some players hoping to reach the Olympics for other countries) and UCLA being the teams without a player making the trip.

Also of note for Oregon is the fact that they’ll be taking a summer trip to Spain in August, so their players are already set up for a busy summer.

Below is the full roster, and the team is scheduled to depart for Australia from Los Angeles July 7.

SMU landed its second commitment in the Class of 2016 Wednesday afternoon, as 6-foot-3 shooting guard Tom Wilson made his pledge to Larry Brown’s program. News of Wilson’s commitment was first reported by Fox Sports Australia, and he joins fellow guard Dashawn McDowell in the Mustangs’ 2016 class to date.

Wilson, who is a scholarship athlete at Basketball Australia’s National Centre of Excellence in Canberra, has plenty of international experience as he served as captain for Australia’s U17 and U19 national teams. At this summer’s FIBA U19 World Championships, Wilson averaged 6.4 points, 4.4 rebounds and 2.8 assists per game.

And in Olgun Uluc’s story on Wilson’s commitment, SMU’s newest recruit spoke about the opportunity to play for Brown and the fact that Brown coached one of his favorite players.

Wilson noted his admiration for Iverson, with his time watching the legendary shooting guard also an introduction to his new head coach.

“I was a big Allen Iverson fan growing up, so I watched all of his documentaries and I knew who Larry Brown was for quite a while, probably since I was 11 or 12 years old,” Wilson said.

“I know Larry’s a guy that, wherever he is, he’s been able to win, and he takes a winning culture wherever he goes. I think the most exciting thing for me is the fact that I get to play under a coach who’s coached the likes of Allen Iverson.”

SMU has just one senior in its current perimeter rotation in Nic Moore. With three juniors and three freshmen making up the rest of the current backcourt, Wilson and McDowell’s fight for minutes as freshmen won’t be an easy one. SMU, which is banned from postseason play this year due to NCAA rules violations, won’t have that issue when Wilson arrives on campus next year.

With Montrezl Harrell moving on to the NBA, Louisville has to account for the loss of its most productive front court player in 2015-16 (they also lost guard Terry Rozier to the NBA). One of the big men who will be expected to step forward for the Cardinals is rising junior forward Mangok Mathiang, who will be Rick Pitino’s second-most productive returnee when next season begins.

Mathiang, who made nine starts and averaged 2.6 points and 4.7 rebounds per contest last season, is playing with Australia in this month’s World University Games and the experience could serve as a springboard into next season. Mathiang’s off to a good start in Gwangju, South Korea too, as he posted a double-double in the team’s comfortable win over Chinese Taipei on Friday.

Mathiang finished the night with 23 points and 11 rebounds, shooting 11-for-15 from the field against Australia’s overmatched opposition. Mathiang reached double figures in scoring twice last season, tallying 11 points in a win over Virginia Tech and 12 in a win over Pittsburgh. But given the loss of Harrell, Louisville will need more consistent play from the 6-foot-10 Mathiang if they’re to make a run at another Elite Eight appearance.

He won’t be the only option for Louisville inside, as the Cardinals return Chinanu Onuaku, Jaylen Johnson, Anas Mahmoud and Matz Stockman, and add Raymond Spalding. The Cardinals will certainly have bodies to call upon in the post; what they’ll need from those options is consistency.

Mathiang and his teammates, which include Albany senior Peter Hooley (who scored 15 points Friday) and former collegians Hugh Greenwood (New Mexico) and Mitch McCarron (Division II Player of the Year at Metro State last season), will face stiffer competition in South Korea beginning with France in their next game. But the 93-47 win is a good start for the Australians, especially if Mathiang can build on his performance.

In each of his last two seasons Boise State guard Anthony Drmic has played well enough to be a second team All-Mountain West selection, helping to lead the Broncos to the NCAA tournament as a sophomore. Last season Drmic averaged 15.9 points and 4.5 rebounds per game, shooting 44.1% from the field and 34.1% from beyond the arc. But while those are good numbers the fact of the matter is that he and the Broncos were unable to build on their NCAA tournament appearance in 2013.

With one final season left to play this is an important offseason for Drmic and his teammates, and the 6-foot-6 guard/forward’s summer will begin with international duty. The goal for Drmic: play well enough in the Australian national team’s training camp, which begins this week (New Mexico’s Hugh Greenwood is also participating), to earn a spot on the squad that will play in a four-game series against China. Following that is the FIBA basketball world cup team, which will play in Spain in August.

Not only does Drmic have the desire to represent his country, there’s also the clear goal of playing well enough in the next year to earn the opportunity to play professionally.

“You always look a little bit forward but it all comes down to what kind of senior year I have,” Drmic said.

“I’m really putting everything I can into preparing for that and seeing what I can do. Everything is on the table for me, it really depends on how I play next season.

“I want to see how far I can take it and whatever opportunities come up be it NBA, Europe or NBL, then I will go from there.”

With Drmic, Derrick Marks and Mikey Thompson all returning, Leon Rice’s Broncos will once again be expected to contend in the Mountain West. But there’s also the loss of forward Ryan Watkins (11.9 ppg, 10.6 rpg) to take into consideration, with Watkins playing well enough in 2013-14 to join Drmic on the Mountain West’s second team all-conference squad.

Players such as returnee Nick Duncan and incoming junior college transfer Kevin Allen will need to produce if the Broncos are to hang with the likes of San Diego State, UNLV and Colorado State. And the same can be said for Drmic, as he’s talented enough to be a first team All-Mountain West selection. A successful summer would undoubtedly help Drmic move in that direction.

One of the wonderful things about basketball is that it truly is an international game, but we see that being more common in the NBA. Basketball is played all over the world, but few groups of international ballplayers take advantage of our system of college basketball like Australians.

According to this interesting read from the Sydney Morning Herald, there are 54 men and 39 women from Australia playing Division I college basketball this season and that number is higher than I probably would have guessed.

The article also does a nice job breaking down some of the current connections between American and Australian basketball and the history of Australian players making a splash here.

St. Mary’s is also brought up in the article as they mention that since 2001 they’ve signed 14 Australians.

The Gaels have been successful in both their men’s and women’s program recruiting from the land down under because they try to make it feel like home for them.

Moraga residents and students have always accommodated Australian players, something Gaze immediately fell in love with.

”The people here really appreciate us and understand how far we have travelled,” Gaze said.

”They even have the Australian flag and the boxing kangaroo flag hanging at our court.”

With players like Dante Exum being mentioned in the same breath as Andrew Wiggins, Jabari Parker and Julius Randle as a potential top-5 pick in next year’s NBA Draft, Australian basketball should be taken more and more seriously, especially with a growing number of players coming to the United States to play college basketball.

Washington State head coach Ken Bone has a vacancy to fill on his coaching staff, as it was announced by the school on Tuesday that assistant coach Ben Johnson has decided to leave the program. Johnson spent the last nine seasons in Pullman, beginning in 2004 as an assistant under then-head coach Dick Bennett.

With the change in regimes it’s rare that an assistant would hang around as long as Johnson did, going from the elder Bennett to his son Tony (who’s now the head coach at Virginia) to coach Bone. Johnson was a teammate of Tony Bennett’s at Wisconsin-Green Bay.

“I want to thank everyone at Washington State University for their genuine care and support over the past nine seasons,” Johnson said in the release.  “My family and I have thoroughly enjoyed being part of Cougar Nation and the University community.  I want to wish Coach Bone, our coaching staff and players the best of luck and continued success.”

One of Johnson’s most important recruits in recent years was Brock Motum, who graduated after playing four seasons in Pullman this past spring. Motum led the Pac-12 in scoring in each of his last two seasons, and he left the school ranked fifth on the all-time scoring list. Motum’s a native of Australia, and Johnson’s connections in the country (he played and coach at the professional level in Australia) helped in the recruiting process.

“We’re sorry to see Ben leave the program,” coach Bone stated in the release. “He has contributed a tremendous amount not only during my four years here at WSU, but also over the past nine seasons. We wish Ben nothing but the best!”

While the Cougars do have to account for Motum’s departure they’ve got some talented players returning to the Palouse, most notably guards DaVontè Lacy and Royce Woolridge. Also of note are the arrivals of two point guards, junior college transfer Danny Lawhorn and freshman Ike Ireogbu, and redshirt freshman Que Johnson has the potential to be one of the best athletes in the Pac-12 after sitting out last season as a partial qualifier.

The Australian influence in college basketball is growing stronger November 16, 2013 10:45 am