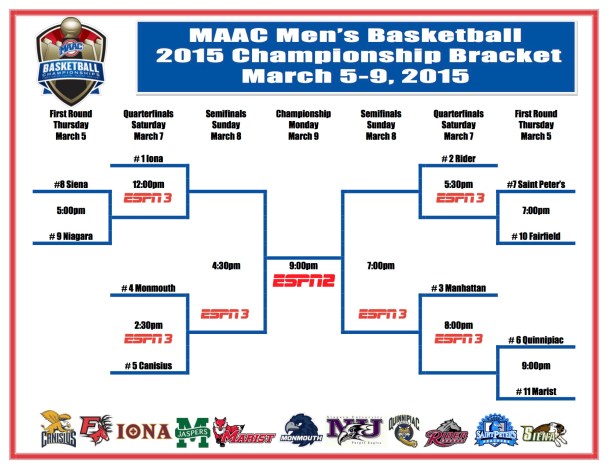 Iona’s A.J. English and St. Peter’s Desi Washington were each suspended one game for their roles in last Saturday’s benches clearing brawl.

The Gaels, the top team in the MAAC, didn’t have time to celebrate their 68-61 overtime win over the Peacocks as tempers flared shortly after the final buzzer. Caught in the middle of the heated exchanged was English and Washington. At one point, one of the referees removed English from the scuffle, only to be tossed aside by the 6-foot-5 shooting guard.

Both schools announced one-game suspensions for their respective players.

“Saint Peter’s places a high premium on sportsmanship and we will continue to be a strong proponent of this fundamental principle throughout our athletic programs and the Metro Atlantic Athletic Conference,” St. Peter’s athletic director Joe Quinlan said in a statement, via NJ.com.

Iona described English’s actions, and subsquent punishment as, “the initiation of an unsportsmanlike incident,” according to a statement from the university, obtained by Ryan Restivo of NYCBuckets.com.

English is arguably the conference’s top player, averaging 20.7 points, 5.7 rebounds and 5.6 assists per game. He will miss Friday night’s game against Siena. He will be available for Sunday afternoon against Marist. Washington, St. Peter’s leading scorer at 14.5 points per game, will sit out Saturday’s matchup with Fairfield.

Iona and St. Peter’s face each other once more, in the regular season finale on March 1.

Iona sits all alone atop the always-competitive MAAC standings, holding a two-game lead over Rider, Manhattan and Monmouth in the loss column.

But after an incident at the end of an overtime win over St. Peter’s on Saturday, it’s unclear whether Gaels star A.J. English will be available for Iona in the near future.

After the final buzzer sounded in a physical, emotionally intense game, the two teams came together at one end of the floor as the benches cleared. There were no punches thrown — it was not a brawl, as some have termed it — but in the middle of the scrum, English was caught on video tossing a referee aside.

Iona head coach Tim Cluess was not all that forthright when discussing the incident on Tuesday. From the Albany Times-Union:

On a media conference call this afternoon, Iona coach Tim Cluess was asked if his team will face any discipline from the Metro Atlantic Athletic Conference or from the Iona athletic department. Cluess said the incident is still under review and his team is getting ready to face the Saints.

In a follow-up question, Cluess was asked if making contact with an official should be punishable with a suspension. “No comment,” he said. “I think you should take a better look at the situation, though.” Asked to elaborate, Cluess repeated, “No comment.”

English is averaging 20.7 points, 5.2 boards and 5.6 assists this season. Losing him would be a massive blow for the Gaels.

On Monday, Wofford announced plans for a new arena, a gift provided by alum and Carolina Panthers owner Jerry Richardson. The 92,000-square-foot facility is scheduled to open in September 2017. For now, the Benjamin Johnson Arena will do work just fine, as evident by the packed crowd on hand for the Terriers’ 7 a.m. tip with MAAC favorite Iona on Tuesday morning.

Wofford, the reigning Southern Conference champion, and favorite to retain that title, outdueled the Gaels, 86-73, in an offensive shootout to pick up its first win of the season.

The Terriers shot 54 percent from the field, including a 6-of-9 shooting from three in the second half (9-of-17 in the game) to turn a three-point halftime deficit into a 13-point victory.

Iona and Wofford traded the lead three times to begin the game before the Terriers began to attack the offensive glass, using second-chance points to spark a lengthy run to extend the lead to double-digits. Wofford led 60-56 when a Justin Gordon putback slam livened the 3,500 in attendance. A minute later Lee Skinner (15 points, nine rebounds) attacked the glass again leading to another second-chance bucket.

Iona’s first half shooting as the morning coffee in Spartanburg, South Carolina: hot, converting on 56 percent its shots while connecting on 7-of-12 from beyond the arc. Although in the second half, a David Laury triple would account for the Gaels’ only deep ball (1-of-5). Laury and A.J. English made eight trips each to the line, converting on 13-of-16 attempts. Unfortunately, for almost seven minutes in the second half, that was the only source of offense for Tim Cluess’ program. In that span, Wofford turned a four-point lead into an 82-66 advantage.

Laury led all scorers with 23 points. English followed with 22 points, four rebounds and three assists. Karl Cochran (20 points) was one of four Terriers in double figures along with Skinner (15), Justin Gordon (13) and Jaylen Allen (11).

Wofford’s first win comes days after an opening night loss to Stanford. The Terriers travel to Fairfield on Friday night to take on another MAAC opponent. Iona, coming off a five-point win against Cleveland State, has a road meeting with Danny Manning and Wake Forest on Friday.

The term “under the radar” can be a difficult one to define with regards to college basketball. For some, lists of such players will be dominated by guys whose programs are part of the nightly highlights packages you doze off to in the early morning hours. But for others, the term “under the radar” applies to players who in November may be on the outside looking in with regards to All-America teams. Below are some players who may not be considered to be preseason All-Americans but have a shot at landing on one of those teams at season’s end.

1. Larry Nance Jr., Wyoming: When it comes to the Mountain West the traditional contenders (New Mexico, San Diego State and UNLV) tend to get most of the attention from fans outside of the region, so the son of the former Cleveland Cavalier may not be as well-known to them. But he should be, as Nance averaged 15.4 points, 8.6 rebounds and 2.1 blocks per game last season. Nance is returning from a torn ACL, but he’s expected to be at full strength when the season begins later this month.

2. Darrun Hilliard, Villanova: Hilliard was a bit miffed that he wasn’t chosen to be Big East POY at their media day, and rightfully so. The senior is coming off of his best season as a Wildcat, averaging 14.3 points and 3.6 rebounds per game. And with James Bell out of eligibility, Hilliard could be even more productive for the preseason favorites to win the Big East.

3. Shawn Long, Louisiana: Losing Elfrid Payton hurts, but in the 6-foot-9 Long head coach Bob Marlin has a very good piece to build around in an attempt to make a second straight trip to the NCAA tournament. Last year Long accounted for 18.6 points, 10.4 rebounds and 2.7 blocked shots per game.

4. R.J. Hunter, Georgia State: When it comes to the best shooters in America, Hunter’s clearly on the list. He averaged 18.3 points and 4.6 rebounds per game last season, helping lead the Panthers to a Sun Belt regular season title.

5. Isaiah Taylor, Texas: Taylor was good as a freshman, averaging 12.0 points, 4.0 assists and 3.3 rebounds per game. But there’s clearly room for improvement, as evidenced by the shooting percentages (39.1% FG, 26.3% 3PT), and the Longhorns’ deep front court should result in cleaner shooting opportunities for him.

6. A.J. English, Iona: While the Gaels will have to account for the loss of Sean Armand, English returns after averaging 17.2 points, 4.3 assists and 3.9 rebounds per game as a sophomore.

7. D’Vauntes Smith-Rivera, Georgetown: Who was the pick to win preseason Big East POY? Smith-Rivera was, and with Markel Starks gone the Hoyas will need a big year from the junior guard. Smith-Rivera accounted for 17.6 points, 5.0 rebounds and 2.6 assists per contest in 2013-14.

8. DaVonte’ Lacy, Washington State: Ernie Kent has a tough job in front of him, but it helps that Lacy has one last season of eligibility. As a junior Lacy averaged 19.4 points and 4.2 rebounds per game.

9. Zak Irvin, Michigan: With Caris LeVert on our All-America team, we’ve essentially pegged him to make the jump that has become commonplace during the John Beilein era in Ann Arbor. But why not Irvin? Thanks to the Wolverines’ personnel losses, he’ll be in a position where he’s asked to do more offensively than just “catch and shoot.”

10. Terran Petteway, Nebraska: While Petteway was a first team All-Big Ten selection last season, that hasn’t led to his being included on many preseason All-America teams. He averaged 18.2 points and 4.6 rebounds per game last season, and if Petteway can improve from an efficiency standpoint look out.

Here are our Preseason Mid-Major All-Americans.

A quick disclaimer before I begin, because determining who qualifies as a mid-major and who doesn’t is always a touchy subject. Here is how we broke it down for these rankings: The Mountain West, the Big East, the Atlantic 10 and the American were all, by default, barred from these rankings. The WCC was eligible with the exception of Gonzaga and BYU. The Missouri Valley was eligible with the exception of Wichita State. Everyone else was fair game.

Why did we eliminate the Shockers from contention? Well, the complicated answer is that “high-major” delegation is more about financial resources, support from the university, the fan base and the community, and consistent, high-level success during the season and on the recruiting trail, but the simple answer is that the Shockers would be the clear-cut No. 1 team here and it’s more fun to do this without them involved. Our rankings, our rules. Deal with it.

Two players suspended one game each for their role in Iona-St. Peter’s incident February 6, 2015 6:00 pm

Second half surge gives Wofford an early morning win over Iona November 18, 2014 9:26 am