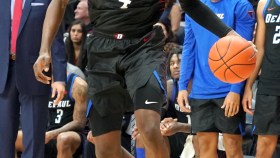 Something that tends to grab attention every year in the aftermath of the NBA Draft is the count on how many schools were represented amongst the draftees and which schools racked up the most selections. At the end of the 2016 NBA Draft Kentucky sat at the top of the list, as three former Wildcats heard their names called Thursday night.

Jamal Murray went in the lottery, with the Denver Nuggets taking him seventh overall, and Skal Labissiere (28th overall) and Tyler Ulis (34th overall) were both picked by the Phoenix Suns.

Villanova, which did not have anyone picked in the draft, became the first national champion since Duke in 2010 to not have a player selected in the first round of the following NBA Draft.

Half of the 16 players who didn’t play college basketball last season went in the first round, led by Croatian forward Dragan Bender who was taken by Phoenix with the fourth overall pick.

From a conference standpoint the SEC had the most first round selections, with five players being selected led by LSU’s Ben Simmons. In total six SEC players were selected, tied for second with the Big 12 behind the ACC.

The ACC had a draft-high nine picks, beginning with Duke’s Brandon Ingram at second overall. Amongst the top ten no conference had more selections than the Pac-12, which had three players (Jaylen Brown, Marquese Chriss and Jakob Poeltl) choses during that portion of the draft.

The first was Hall of Fame center Shaquille O’Neal, who was taken by the Orlando Magic in 1992. In total nine former LSU players have been top five draft picks in program history, with Bob Pettit (1954) and Stromile Swift (2000) going second overall in their respective drafts.

Simmons posted gaudy numbers in his lone season at LSU, averaging 22.0 points, 13.5 rebounds, 5.5 assists and 2.3 steals per game despite the absence of a perimeter shot. And the team wasn’t as successful as expected either, as the Tigers failed to qualify for the 2016 NCAA tournament and sat out postseason play.

Expected No. 1 pick Ben Simmons (LSU) and likely No. 2 Ben Ingram (Duke) will be in attendance as will Kentucky’s Jamal Murray and Skal Labissiere, both of whom are expected lottery picks, with Murray projected to potentially go in the top five.

Kentucky wasn’t the only school to land two players at Brooklyn’s Barclays Center as Michigan State (Denzel Valentine and Deyonta Davis) and Washington (Marquese Criss and Dejuonte Murray) both accomplished the feat as well.

No. 2 Baylor pushes winning streak to 15 with come-from-behind win at Oklahoma State

Of all the early entrants to enter the NBA Draft earlier this spring, Valparaiso forward Alec Peters likely had the most interesting set of choices. Of course there was the matter of whether or not to remain in the draft. But in the case of Peters, as a player graduating with a season of eligibility remaining, there was also the question of whether or not he’d use that year at Valpo or another school had he decided to return to college.

Monday afternoon it was reported that Peters, who just before last week’s deadline withdrew his name from the NBA Draft, will in fact return to Valparaiso for his senior season. News of Peters’ decision was first reported by CBSSports.com. That means he won’t reunite with Bryce Drew, who coached Peters the last three years before taking the Vanderbilt job earlier this spring.

As a result of Peters’ decision a player who would have been in high demand as a graduate student (he graduated in three years) will be the focal point of new head coach Matt Lottich’s first team at Valpo. With Horizon League POY Kahlil Felder leaving Oakland, Peters will be the clear favorite for league player of the year honors next fall.

As a junior the 6-foot-9 Peters averaged 18.4 points and 8.4 rebounds per game for the Crusaders, who won 30 games, the Horizon League regular season title and reached the championship game of the Postseason NIT. Peters’ ability to score in an efficient manner from anywhere on the court makes him not only the top returnee in the Horizon League but also one of the top seniors in college basketball heading into next season.

In spite of some key personnel losses, most notably defensive stalwart Vashil Fernandez, the Crusaders will return three of their top four scorers (Peters, Shane Hammink and Tevonn Walker). That will help Lottich as he looks to pick up where his boss left off.

With the change to the NCAA deadline for underclassmen to withdraw from the NBA Draft moving from mid-April to May 25, college programs and fan bases across the country anxiously awaited Wednesday night’s deadline for news on players still going through the decision-making process.

With the dust having settled Thursday morning, the NBC Sports College Basketball Talk crew (Rob Dauster, Raphielle Johnson and Scott Phillips) got together to discuss the winners and losers. Among those discussed are Oregon, four Big Ten teams (Indiana, Maryland, Purdue and Wisconsin), and USC. It should be noted that Maryland was discussed before news of Justin Jackson’s commitment broke, so their front court looks a little different due to that.

We also touched on our updates to the Top 25, with the Boilermakers making a move up in the rankings, and Marcus Lee’s decision to transfer from Kentucky. As always, you can either click “play” in the Soundcloud player below or listen via iTunes or the Stitcher app. Thanks for listening!

No. 2 Baylor pushes winning streak to 15 with come-from-behind win at Oklahoma State

With the deadline for early entrants to withdraw from the NBA Draft set for Wednesday, some college basketball teams will receive important news as it pertains to the 2016-17 campaign. One of those teams was Nevada, which surprised many last season by winning 24 games in Eric Musselman’s first season at the helm. And with one of the key contributors from that team deciding to withdraw from the NBA Draft, the Wolf Pack will be well positioned to be even better in 2016-17.

Forward Cameron Oliver, who was one of the Mountain West’s best freshmen this past season, will return to Reno for his sophomore season with Musselman making the news official Monday afternoon.

Oliver and wing D.J. Fenner (13.7 ppg) are the team’s top two returning scorers, with guard Marqueze Coleman (15.1 ppg) out of eligibility, and they’ll lead the way for a team that can contend in the Mountain West next season.

In addition to Oliver and Fenner, Nevada adds two talented transfers in Leland King and Marcus Marshall, with the latter averaging 19.5 points per game at Missouri State in 2014-15.