The Cardinals (19-4, 8-2 Atlantic Coast Conference) followed up Monday’s upset of No. 2 North Carolina with a lopsided win despite uneven stretches. The absence of leading scorer Damion Lee (bruised knee) impacted their rotation, but plenty of teammates stepped up to fill the void in an emotional game.

Several baskets by Lewis midway through the second half help spark a 10-0 run that got Louisville back out to a comfortable lead en route to keeping the Eagles (7-16, 0-10) winless in league play.

Sammy Barnes-Thompkins scored 11 points for Boston College before fouling out.

Even with their top scorer on the bench in street clothes, the Cardinals got the dominant win they wanted one day after an announcement by Louisville’s president that the team would not play in either the ACC or NCAA tournaments. President James Ramsey said an investigation revealed that violations did occur when the school reviewed allegations by escort Katina Powell that former staffer Andre McGee paid her and other dancers to strip and have sex with recruits and players.

Lee and Lewis – graduate transfers who came to Louisville with hopes of playing in the tournament – said the team wanted to make the most of its nine remaining games with a focus on holding serve at home. Other than a few lapses that allowed Boston College to get within single digits, the Cardinals used most of their bench to that end.

The Cardinals made 16 of 26 from the field after intermission to finish at 51 percent. They controlled the paint 44-20 and out-rebounded Boston College 38-30.

Louisville’s reserves outscored the Eagles 24-12, chipping in some key points for a 32-14 lead at the break despite 42 percent shooting. Johnson’s seven points led nine Cardinal scorers and featured a 3-pointer by reserve David Levitch late in the half.

Boston College meanwhile started 1 of 7 from the field and shot just 30 percent in a first half, which included 11 turnovers leading to 12 Louisville points. Those struggles made it easy for the Cardinals to mount a 17-0 run over 4:05 for a 19-2 lead and an advantage that reached 19.

The Eagles showed some life early in the second half with five straight baskets to get within 37-28 and create some uneasiness before Lewis took charge.

Louisville: The Cardinals’ 1956 NIT Championship team was honored in a halftime ceremony that featured several members. … Louisville took a 4-3 lead in the series and remained unbeaten at home against BC. 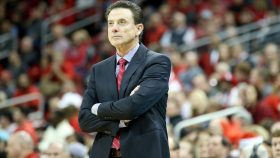 Lawyer: Escort unlikely to talk with NCAA without immunity

Rick Pitino: ‘I will not resign’

Friday afternoon news dumps are rarely positive, and that was the case for the Louisville basketball program.

A source confirmed to NBC Sports that as part of the ongoing NCAA investigation into allegations levied by former escort Katina Powell, the school has declared the men’s basketball team ineligible for postseason play this season. The investigation has yet to be completed, and the NCAA has yet to send Louisville an official Notice of Allegations, but the school has decided to take this preemptive step.

During a press conference in which the school made the news official, head coach Rick Pitino noted that “speaking to the team and watch the players cry” was one of the hardest things he’s had to deal with in his coaching career. The players hurt the most for Damion Lee and Trey Lewis, grad students who transferred to Louisville in hopes of experiencing the NCAA tournament.

This is the second consecutive season in which an ACC team has self-imposed a postseason ban in the middle of the year, with Syracuse doing so in 2014-15. In regards to this season, Louisville joins Missouri, Pacific, Southern Miss and SMU as programs that have announced postseason bans for their programs.

The Cardinals are currently ranked 19th in the AP Poll, with an overall record of 18-4 with a 7-2 record in ACC play. Considered a lock for the NCAA tournament, Louisville is also in position to win the ACC regular season title after handing No. 2 North Carolina its first loss of the season Monday night.

Now, that’s the only honor a team led by two players in Lee and Lewis who transferred to Louisville in hopes of competing for a national title can aim for.

News of the self-imposed sanction was first reported by Kentucky Sports Radio.

Lee hit his first six tries from long range and Trey Lewis made four 3s in the second half for the Cardinals (17-3, 6-1 Atlantic Coast Conference). Lewis finished with 22 points, all but two coming after halftime.

Jalen Hudson scored 27 points, Seth Allen had 26 and Zach LeDay 20 for the Hokies (12-9, 4-4), who have dropped three in a row since a surprising 4-1 start to conference play. Virginia Tech stayed in the game by making 33 of 38 free throws, but allowed the Cardinals to hit 12 3-pointers in 18 attempts.

The Cardinals arrived with the nation’s top field goal percentage defense (36.4 percent), and the second-stingiest scoring defense (58.8 points), but much of their interior presence was taken away quickly as 6-foot-10 Chinanu Onuaku was whistled for two quick fouls.

Onuaku was never much of a factor, but the Cardinals stepped outside to make up for it.

In the closing minutes, with the Hokies forced to foul, the Cardinals were on target from the line as well, preventing Virginia Tech from getting any closer than six down the stretch. Louisville finished 25 of 34 at the free throw line.

Jaylen Johnson had 11 points for Louisville. Justin Bibbs scored 10 for the Hokies.

The Cardinals hit six 3-pointers in the first 10 minutes of the second half, opening a 67-57 lead, and appeared poised to put the Hokies away. But Virginia Tech continued driving the ball to the basket, getting Onuaku and 7-footer Anas Mahmoud into foul trouble – both eventually fouled out – and the Hokies made their free throws.

The Hokies led 20-12 before going more than 10 minutes without a field goal and getting just 12 points on free throws. The Cardinals used a 12-2 run to take a 24-22 lead, and closed the half on Lee’s buzzer-beating fourth 3-pointer of the half to lead 38-34 at the break.

Louisville: Onuaku arrived at Cassell Coliseum as the first Cardinals player in 22 years to record six consecutive double-doubles, but was whistled for two personal fouls in 3 minutes and sat out the rest of the first half. He finished with nine points and five rebounds.

Virginia Tech: The Hokies were 17 for 18 from the foul line and outscored Louisville 17-5 from the line in the first half.

Louisville is at home against No. 11 Virginia on Saturday.

The Hokies play at Pittsburgh on Sunday.

All of a sudden, the Tigers look like a team that might end up making some noise in the ACC this season They’re now 3-1 in the league with consecutive wins over Syracuse, Florida State and, now, Louisville.

The story of this game, however, was the play of those Cardinals.

Louisville scored the first eight points of the game, but Clemson would outscore them 31-17 over the final 17 minutes of the half; with just over seven minutes left in the game, the Cardinals were still down 47-36.

Trey Lewis and Damion Lee, Louisville’s two leading scorers, were the two biggest culprits. Lewis was 3-for-19 from the floor. Lee was 2-for-12. They were a combined 1-for-18 from three. It’s tough to win games when you’re two best offensive weapons can’t buy a bucket. As a team, the Cardinals missed 18 of their first 19 threes, shot just over 35 percent from the floor, committed 17 turnovers and allowed Clemson to get to the charity stripe 44 times.

This is how bad it was for Louisville: They grabbed 24 offensive rebounds and held Clemson to 32.3 percent shooting from the floor and they needed a late flurry just to make the final scoreline as close as it was.

Now to be fair, much of the “blame” for Louisville’s poor performance on Sunday can be pinned on Clemson and head coach Brad Brownell. They took away what Louisville wanted to do offensively and made life difficult for Lewis and Lee. But the Cardinals also had their fair share of unforced mistakes late in the game, whether it be a missed layup or a blown defensive assignment or another in the seemingly endless line of open threes that went clanging off the rim.

This was about as poorly as Louisville can play, particularly on the offensive end of the floor, and they were down by a single possession in the final minute on the road. Road wins in league play are never easy, and this is a perfect example of that.

Quentin Snider came off the bench to score 21 points and Chinanu Onuaku added 12 points and 14 boards as No. 16 Louisville went into Raleigh and knocked off N.C. State, 77-72.

The Cardinals were up by as many as 16 points late in the second half but the Wolfpack rallied. They cut the lead to 75-72 after Louisville’s Damion Lee missed a pair of free throws, but Cat Barber missed a driving layup and knocked the rebound out of bounds.

We still don’t really know just how good this Louisville team is. Their only two wins over high major competition came against Wake Forest and N.C. State, and there’s a good chance that neither of those two teams will end up in the NCAA tournament come March. That said, this team feels more promising with each passing game, and it’s not strictly because of the results.

Early in the season, the knock on this group was that they would go as far as Trey Lewis and Damion Lee would carry them, and there is probably some truth to that. Lee is having an all-ACC kind of season. Lewis isn’t that far behind. We know how good those two can be.

The question was whether or not the supporting cast was going to show up, and of late, they have. Snider played the best game of his Louisville career on Thursday night. It wasn’t just the 21 points that he scored, he also played some terrific defense on N.C. State’s star guard Cat Barber, who finished with 20 points but needed 22 shots to get there. Snider hasn’t been a bit inconsistent this season but it is nice to see what he’s capable of doing. Confidence is a beautiful thing.

Onuaku is averaging 10.0 points and 13.0 boards in his last three games. Donovan Mitchell, who sparked the second half comeback against Kentucky and had 18 points and eight boards against Wake Forest, is finally coming into his own. Ray Spalding had 12 points against N.C. State.

The bottom line is this: Rick Pitino’s roster is young, but there are some quality pieces on it that look like they’re starting to come into their own.

Maybe scheduling softly, letting these kids build up some confidence while they won some games, was a smart move after all.

LOUISVILLE, Ky. (AP) Trey Lewis scored 21 points and No. 16 Louisville used a hot shooting start to coast to a 98-68 victory over Utah Valley on Wednesday night.