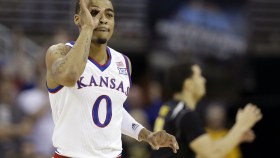 Big Ten Preview: Can Maryland give the Big Ten a national championship?

Pac-12 Preview: Expect a tight race at the top

Today, we are previewing the ACC.

1. Marcus Paige is healthy which makes UNC is a title contender: Entering the season with a mountain of hype, Marcus Paige spent the majority of the year trying to work his way through ankle and foot injuries that led to offseason arthroscopic surgery. He’s healthy now, meaning he’s no longer limping while walking to class or spending his practice time on a stationary bike, and that’s huge for the Tar Heels. Throw in that sophomores Joel Berry, a point guard that should be able to move Paige off the ball, and Justin Jackson, a talented wing scorer, should rightfully be expected to take a step forward and that UNC’s massive front line returns intact, and Roy Williams has all the pieces to make a run at a national title.

2. Duke should contend despite losing four starters : Tyus Jones, Justise Winslow and Jahlil Okafor are all in the NBA. Quinn Cook graduated after what felt like a seven-year career. Only four players with game experience return, but the Blue Devils will be just fine. That’s what happens when you bring in a recruiting class that includes potential top five pick Brandon Ingram and fellow five-star recruits Luke Kennard, Chase Jeter and Derryck Thornton. Coach K will have a ton of talent on the wings, meaning that you should expect the Blue Devils to play uptempo basketball that features Ingram, a small forward by trade, at the four quite often. While the development of guys like Grayson Allen, Matt Jones and Sean Obi will be key, Duke’s success this season will likely be determined by two things: Thornton’s adjustment to playing point guard at the highest level a year early and whether or not Marshall Plumlee can have a senior season on par with Brian Zoubek’s in 2010.

3. You can’t count Tony Bennett out at this point: There are some legitimate reasons to be concerned about Virginia this season. They weren’t the same team after Justin Anderson’s injury last season, and Anderson went to the NBA. They’re built around their defense, and not only do they lose Anderson, but they lose Darion Atkins, who was one of the best defensive big men in the country. Those are concerns, but with their back court of London Perrantes and Malcolm Brogdon intact, depth up front and Bennett’s Pack-Line defense still running things, the ‘Hoos will be just fine. And if Marial Shayok and Isaiah Wilkins develop, they’ll have a real shot at winning their third straight ACC regular season title.

4. The name Demetrius Jackson: Notre Dame has some serious pieces to replace this season, as Jerian Grant and Pat Connaughton have both graduated. But luckily for Mike Brey, he still has Demetrius Jackson in the fold. Jackson, a 5-foot-11 point guard that played off the ball last season, should thrive in Brey’s pick-and-roll heavy offense. Brey is going to make sure that the ball is in his hands and he’s going to allow Jackson to make decisions, because that’s the way that Brey likes to coach. With Zach Auguste back and promising youngsters like Steve Vasturia, V.J. Beachem and Bonzie Colson back — not to mention newcomers Rex Pfleuger and Matt Ryan — Jackson will have plenty of space to operate. I think he becomes a lottery pick this season.

5. The second-tier in the ACC is a mess, but in a good way: There’s a clear-cut top three in the conference this season: North Carolina, Duke and Virginia, in some order. But after that, there are about six teams that can all finish somewhere between fourth and ninth in the league standings: Notre Dame, Florida State, N.C. State, Syracuse, Miami, Pitt, Louisville. I’d even argue that Wake Forest has a chance to make some noise in league play, assuming that point guard Codi Miller-McIntyre can get healthy. Where in past seasons, the middle of the conference has been on the weaker end of the spectrum, the ACC looks like they could get eight or nine teams into the NCAA tournament this season.

I know what you’re thinking. I’m thinking it, too. Paige was considered by many to be the Preseason National Player of the Year entering the 2014-15 season, and he followed that up by seeing his scoring numbers drop from 17.1 points as a sophomore to 14.5 points as a junior. Part of that was due to the fact that the Tar Heels were better and more balanced, meaning that Paige didn’t need to carry the load as much as he had in previous years. They also lacked a true point guard, as neither Joel Berry nor Nate Britt truly embraced the role, forcing Paige to play the position. But more than anything, it was his health that led to his limited production. Those nagging injuries are gone now, meaning we’re going to see the real Marcus Paige this season.

THE REST OF THE ACC FIRST TEAM:

Demetrius Jackson would have been the pick here, but seeing as we’ve already written plenty on him, we’re going to go with Allen. A former McDonald’s All-American dunk contest champion, Allen exploded into the national consciousness with a terrific performance in the Final Four last season. With more playing time available this season, and with Duke expected to play a system that fits Allen’s skill-set much better this season, don’t be surprised to see him develop into an all-ACC caliber player.

Roy Williams is not on the hot seat, not unless the NCAA comes heavy-handed when they hand out their punishments. But Williams is under more pressure than his brethren at other blue blood programs because this may be the last time for a while that he truly has a national title contender on his hands. UNC’s recruiting has been hurt by the potential sanctions that could be handed down. They’re expected to miss out on all of the elite talents coming out of their state for the second straight recruiting class, meaning he doesn’t exactly have replacements in line for the talent that could leave Chapel Hill after this season. Ole Roy is 65 years old. He doesn’t have too many years left, does he?

ON SELECTION SUNDAY WE’LL BE SAYING … : Duke has a real chance to repeat, but North Carolina and Virginia are both more likely to cut down the nets in Houston.

I’M MOST EXCITED ABOUT : League play is going to be awesome, and those Duke-North Carolina games will be as testy as ever, but how about this two-night stretch in the Triangle: Maryland at North Carolina followed by Indiana at Duke. That will be fun.

1. North Carolina: UNC will win the ACC if Paige is healthy, Berry takes over the point guard role and Jackson develops into a consistent scorer and deep threat.
2. Virginia: The ‘Hoos will win the league if Marial Shayok can replace Anderson’s production and if Isaiah Wilkins can provide quality bench production behind Mike Tobey and Anthony Gill.
3. Duke: Duke will win the conference if Thornton proves to be ready to handle the rigors of the point in the ACC, Plumlee develops into a dominant shot-blocker and rebounder, and if Ingram can find be a dominant force on both ends of the floor.
4. Notre Dame: You already know how we feel about Jackson, but the key to the season for the Irish is going to end up being how well they can replace Connaughton. He was a sharpshooter that could hold his own defensively and on the glass in the paint despite being a natural two-guard. Those aren’t easy to find.
5. Florida State: The Seminoles are the most intriguing team in the conference. Rathan-Mayes is the name everyone will know, but they also add a trio of talented freshmen wings — led by five-star scorer Dwayne Bacon — to go along with the likes of Montay Brandon and Devon Bookert. Leonard Hamilton also has plenty of size on his roster, including three players listed at 7-foot-1 or taller. If FSU misses out on the NCAA tournament this season, it won’t be because they lacked the pieces on their roster.
6. Miami: The Hurricanes are a bit thin in the front court, but they have quite a bit of talent in the back court. Sheldon McClellan is underrated nationally and sophomore Ja’Quan Newton should be primed for a big season. The key will be Angel Rodriguez. He’s a top 15 point guard nationally when he’s playing well, but he’s wildly inconsistent.
7. N.C. State: The Wolfpack have developed a reputation of being a team that underwhelms during the regular season before turning things on during the NCAA tournament. I could see them finished fourth in the league and I can see them finishing tenth, but I think that with a roster anchored by Cat Barber and Abdul Malik-Abu, Mark Gottfried should be able to get this group to the tournament.
8. Louisville: I love their freshman class — Donovan Mitchell is going to be a star — but with the scandal swirling around the program and the lack of an entrenched, veteran presence on the roster, Rick Pitino could be in for a long year. I’m not convinced grad transfers Damion Lee (Drexel) and Trey Lewis (Cleveland State) can lead them to glory.
9. Pitt: Forwards Michael Young and Jamel Artis are good and Chris Jones could be in line for a breakout season, but what on this roster is going to scare opposing coaches? The Panthers could end up being an NCAA tournament team, but I’m not sure their ceiling is much more than that.
10. Syracuse: Fresh off of a postseason ban, the Orange look like a team with a shot of getting to the Big Dance this season. Michael Gbinije could end up being a first-team all-ACC player, but there are too many other question marks to feel confident with this group. Is Trevor Cooney ever going to be consistent shooting the ball? Can Kaleb Joseph handle the point guard spot this year? Are the bigs any good? Can Tyler Lydon or Malachi Richardson have an immediate impact?
11. Clemson: The Tigers are evidence of why it’s so difficult to coach at a place like Clemson. They return quite a bit of talent from a team that went 8-10 in the league last season, but given the quality of the programs ahead of them, it’s hard to see Brad Brownell’s club climbing significantly in the standings.
12. Wake Forest: Danny Manning has landed a couple of quality recruiting classes in a row and sophomore Konstantinos Mitoglou looks like he has a really bright future, but Codi Miller-McIntyre’s foot injury really put a damper on this team’s expectations heading into the season.
13. Virginia Tech: Buzz Williams has brought in some quality young pieces and will replace the departed Adam Smith with Maryland transfer Seth Allen. I think the Hokies are still a year away from really competing, but they’re what I like to call an upside-team. The future is bright.
14. Georgia Tech: Brian Gregory was lucky to hang onto his job after last season, and there wasn’t a major roster overhaul that would leave me to believe the Yellow Jackets will make a jump in the standings. Adding Adam Smith from Virginia Tech will help, however.
15. Boston College: Losing Olivier Hanlan to the NBA means that things are probably going to get worse before they get better for BC head coach Jim Christian.