West region No. 5 Baylor entered the NCAA tournament looking to erase the memory of last season’s early NCAA tournament exit, with a veteran group having designs on playing deep into this season’s event. Unfortunately for Scott Drew’s Bears they drew ran into Ivy League champion No. 12 Yale, and throughout most of the contest James Jones’ Bulldogs outplayed Baylor.

And despite some nerve-wracking moments late the Bulldogs pulled out the 79-75 victory, picking up the first NCAA tournament win in program history.

Makai Mason was the star for the Bulldogs, scoring 31 points (a school NCAA tournament record) as he managed to go just about wherever he wanted against the Baylor defense. Baylor’s standard matchup zone was no match for what Yale threw at them offensively, as the Bulldogs were able get through for quality looks inside the arc. The game reached a point to where Baylor had to come out of the zone and play man, and that didn’t work all that well either.

Normally in upsets the underdog gets hot from three, but that wasn’t the case in Providence. Yale shot 5-for-16 from three but made 63.6 percent of their two-point attempts. And to be fair to the Bulldogs, they looked nothing like an underdog for most of this game.

There were moments of frustration for Baylor, most notably an argument between Rico Gathers Sr. and Taurean Prince (28 points) during a second half timeout, and Yale had a lot to do with that. The Bears made a late run thanks in large part to Prince, and defensively they forced turnovers with full-court pressure to close the gap to one in the game’s final minute.

But they were unable to get any closer than that, and down two with 6.8 seconds remaining a Lester Medford turnover resulted in Baylor not getting off a shot to either tie the game or take the lead.

Baylor’s ability to control the glass has been key for them throughout the season, and they did managed to grab 14 offensive rebounds Thursday. But Yale is a good rebounding team in its own right, as they entered the game ranked in the top ten nationally in offensive and defensive rebounding percentage. Thanks to the presence of players such as Justin Sears, Nick Victor, Sam Downey and Brandon Sherrod (in total seven Bulldogs average at least 2.5 rebounds per game), won the battle on the boards Thursday afternoon. Add in Yale’s superior offensive execution, and Jones’ Bulldogs were able to advance.

Next up for Yale is No. 4 Duke, which beat No. 13 UNCW in the first game of the day in Providence.

KANSAS CITY, Mo. (AP) Scott Drew thought his team was playing well entering the Big 12 tournament, but the conference was so challenging this year that Baylor kept coming out on the losing end.

The Bears finally got rewarded for their solid play Thursday.

Taurean Prince had 24 points and 13 rebounds, Rico Gathers added 13 points and No. 22 Baylor’s baffling zone defense shut down No. 23 Texas in a 75-61 victory in the tournament quarterfinals.

“That’s the tough thing in the Big 12. When you’re playing great teams, you can be playing good basketball and not get the win,” Drew said. “I think we were playing decent. We just weren’t winning.”

They picked a fine time to change that narrative.

The fifth-seeded Bears (22-10) opened a 15-point lead in the first half, then used Drew’s trademark defense to keep the fourth-seeded Longhorns (20-12) from coming back. The reward is a date in the semifinals against top-ranked Kansas or Kansas State on Friday night.

“We just wanted to come out with energy, flying around, give good ball pressure,” said Al Freeman, who scored 12 for the Bears. “We wanted to limit them on second-chance points as much as possible.”

They did that by out-rebounding the Longhorns 46-27.

Connor Lammert had 15 points, Kerwin Roach had 13 and Shaquille Cleare had 12 for Texas, but the bigger story was who got shut down: All-Big 12 guard Isaiah Taylor scored just eight, all in the second half.

The Longhorns have lost four straight to Baylor in the Big 12 tournament.

Texas was hoping to get a boost from the return of big man Cameron Ridley, who had been out since late December with a broken foot. He was cleared to practice this week and checked in with about 6 minutes to go in the first half, then immediately got fouled and contributed two free throws.

“The doctor and trainer gave me a restriction on how many minutes he could play,” Texas coach Shaka Smart said. “At halftime he was feeling a little pain so that was that. He wasn’t going to play anymore.”

The Bears opened a 31-16 lead late in the first half, slicing right through a Texas defense that held Oklahoma State to 50 points its last time out. And when the Longhorns made a small run to trim their deficit to single digits, Jake Lindsey hit a buzzer-beating 3-pointer to give Baylor a 38-27 lead at the break.

The Bears pushed their advantage to 59-40 on Johnathan Motley’s breakaway dunk midway through the second half, and the small contingent of Longhorns fans – with the Jayhawks and Wildcats waiting in the wings, there wasn’t much Baylor flavor either – continued to sit on their hands.

Smart’s bunch finally gave them a reason to cheer.

Taylor’s first basket of the game with 10:36 to go started a 10-0 run, and Prince Ibeh capped it with a rim-rattling dunk over Gathers to make it 59-50 with about 7 minutes to go.

The Longhorns kept the Bears uncomfortable the rest of the way, but they were unable to make the stops they needed to complete their comeback. Prince combined with Al Freeman and Lester Medford to make enough free throws down the stretch to put the game away.

“They were the more aggressive team for the majority of the game,” said Smart, who got his first taste of the Big 12 tournament. “That’s what allowed them to win.”

Gathers dealt with an illness late in the season, but said he’s close to being in shape. He played 22 minutes against the Longhorns. “Trying to get myself back into the groove of things,” he said.

Baylor: Ish Wainwright had eight boards. … The Bears are 22-2 when leading at the half. … Baylor is 11-7 against Texas since snapping a 24-game losing streak in the rivalry.

Texas: Taylor also contributed three rebounds. … The Longhorns had won three of their last four, with their lone loss to Kansas. … Texas lost to Baylor in the Big 12 semifinals two years ago.

Baylor faces the Jayhawks or Wildcats in Friday night’s semifinals.

WACO, Texas (AP) Rico Gathers had 17 points and nine rebounds, and No. 17 Baylor used a quick start to the second half to beat Georgia 83-73 in the Big 12/SEC Challenge on Saturday night.

Gathers had one of Baylor’s five three-point possessions during a 17-2 run in the first 4 minutes after halftime to turn a 35-32 deficit into a 49-37 lead. The Bears (17-4) scored just three points before the first media timeout in the first half.

Ishmail Wainright hit a tying 3-pointer 12 seconds into the second half, and Al Freeman put Baylor ahead for good with another in the Bears’ 34th consecutive home win against a nonconference opponent. It was the first meeting between the schools.

J.J. Frazier had 21 points and 11 assists to lead the Bulldogs (11-8), who lost consecutive games for the first time this season.

After Frazier scored Georgia’s final five points before halftime to break a 30-all tie, Lester Medford set the tone for Baylor’s early second-half spurt by picking up the ball near midcourt with 5.1 seconds left and racing to the basket for a layup just before the halftime buzzer.

Freeman had two 3-pointers during the run and scored all 14 of his points after halftime. Taurean Prince joined Gathers with a three-point play.

The sixth three-point conversion in the first 7 minutes of the second half – a layup and free throw by Johnathan Motley – pushed the Baylor run to 26-6 for a 56-41 lead, starting with Medford’s layup to finish the first half.

Prince scored 13 points, Motley added 12 and Medford had nine points and eight assists as the Bears improved to 8-1 against the SEC since the 2012-13 season.

It was the 16th win in 17 home games for Baylor, the only loss coming to No. 1 Oklahoma last weekend. The Bears are tied atop the Big 12 with Oklahoma and West Virginia at 6-2.

The Bulldogs shot 50 percent and led most of the way before halftime, but missed 10 of their first 12 attempts as the Bears took control on their way to a 3-0 record in the Big 12/SEC Challenge.

All of Georgia’s four double-figure scorers reached the mark against Baylor, with Yante Maten getting 18 points followed by Kenny Gaines (14) and Charles Mann (13). But the Bulldogs were outscored 26-7 off the bench by the deeper Bears. Motley led Baylor’s reserves in scoring.

Georgia: Oklahoma State and Texas Tech are the remaining Big 12 teams the Bulldogs haven’t faced. … Georgia fell to 12-13 against the Big 12.

Baylor: Prince was honored before the game for becoming the school’s 30th 1,000-point scorer. He reached the milestone Jan. 9 at Iowa State. … The Baylor football team took the Russell Athletic Bowl trophy to midcourt for a halftime celebration, drawing a standing ovation from the crowd. 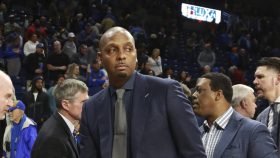 In their Big 12 opener January 2, No. 13 Baylor was on the receiving end of a 102-74 beating at Allen Fieldhouse and looked nothing like a team capable of contending for a conference title. Eighteen days later, Scott Drew’s Bears grabbed sole possession of first place in the Big 12 with a 79-72 double-overtime win over Kansas State in Waco.

The key in the extra sessions was guard Al Freeman, who scored all 11 of his points after the end of regulation. Freeman was responsible for all seven of Baylor’s points in the first overtime, and his scoring outburst came just in time for Baylor as they struggled to put away the Wildcats. Baylor wasn’t at their best, committing 19 turnovers (to be fair, K-State had 22) and allowing Kansas State to grab 17 offensive rebounds amongst other issues.

But they found a way to get the win, avoiding a defeat that would have caused a five-way tie atop the Big 12 standings.

Of those 19 turnovers Taurean Prince was responsible for six of them, and when combined with his 7-for-18 night from the field the senior wing wasn’t as efficient as he’s capable of being. That, along with the play of guards Freeman and Lester Medford (nine points, 13 assists and three turnovers) will be key for Baylor if they’re to remain a factor in the Big 12 race and remove the bad taste of last season’s hasty NCAA tournament exit from their collective mouths.

The talent is there, especially in the front court with Prince being joined by Rico Gathers Sr. and Johnathan Motley, and reserve Terry Maston averaging 10.3 points and 3.0 rebounds per game in Big 12 play off the bench. How consistent the guards and the other key decision-makers (meaning Prince) can be with the ball in their hands will determine just how good Baylor can be.

If they’re all producing in their roles, Baylor will certainly have staying power. With No. 1 Oklahoma visiting Waco this weekend, Baylor couldn’t afford to lose to Kansas State. And thanks to Al Freeman getting going in overtime, the Bears will go into that game in sole possession of first place.

Prince was 13 of 19 from the field, including 3 of 4 from 3-point range, and led the Bears (9-2) with six rebounds in their 32nd consecutive non-conference home win.

Pascal Siakam had 26 points and 10 rebounds to lead the Aggies (7-6), who were facing their first nationally ranked opponent of the season.