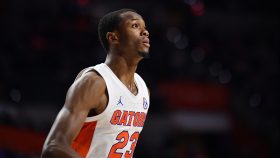 Today, we are previewing the Mountain West.

While the Mountain West did manage to get three teams into the NCAA tournament a season ago, 2014-15 also served as a wakeup call of sorts. The league put together an out of conference strength of schedule that was ranked 25th out of 33 leagues, and there was a price to be paid Selection Sunday. San Diego State received an eight-seed and Boise State, which shared the regular season title with SDSU and was the top seed in the Mountain West tournament, landed in the First Four where they got to take on Dayton, whose home arena hosted those games.

The Broncos and Aztecs are two of the teams expected to contend this season, with a talented UNLV squad looking to get into the mix and Fresno State and Utah State also capable of making a run. But even with the amount of talent possessed by those programs, what they do in November and December will have a major impact on how much respect they’re given in March. The Mountain West learned this the hard way last season.

1. UNLV brings in the conference’s top recruiting class in what is a big season for Dave Rice: According to Rivals.com the Runnin’ Rebels have a class that’s the 11th-best in the country, with big man Stephen Zimmerman being the crown jewel of that group. Add in transfers such as Jerome Seagears (Rutgers), Ben Carter (Oregon) and Ike Nwamu (Mercer), and a sophomore class expected to take a step forward, and there’s no denying that Dave Rice and his staff have a lot to work with. But can they take advantage of it? Not only will the answer impact this season, but it could also impact the direction of UNLV basketball in seasons to come.

2. Nevada and Utah State made head coaching changes: There were two head coaching changes in the Mountain West this offseason, and the two hires are in far different situations. Eric Musselman, who has plenty of experience at both the college and NBA levels, takes over at Nevada and he’s already had success on the recruiting trail. The other move occurred at Utah State, where longtime assistant Tim Duryea slides over a seat to take over for the retired Stew Morrill. And with all five starters back, led by Player of the Year candidate Jalen Moore, Duryea could have a Mountain West contender on his hands.

3. San Diego State has some issues to sort out offensively: You know that Steve Fisher’s Aztecs are going to bring it defensively; that hasn’t been in question for a long time on Montezuma Mesa. But what is up for questioning is this group’s productivity on the offensive end, with their best perimeter shooter from last season out of eligibility (Aqeel Quinn) and the player expected to be that option (Matt Shrigley) sidelined with a torn ACL. Can Malik Pope develop into the talent that has some NBA Draft types discussing him as a possible first round pick? Is freshman Jeremy Hemsley the answer at the point? Those are two key questions SDSU faces heading into the season.

4. Anthony Drmic returns to the court after redshirting last season: When Boise State lost Anthony Drmic for the season in January due to a back injury, it was assumed that the Broncos were in trouble. Well everyone else got healthy, Derrick Marks emerged as the conference’s best player and James Webb III took off in conference play. While Marks is now playing professionally, Drmic returns for his final season, joining a highly experienced perimeter rotation on a team that can win another Mountain West title.

5. Colorado State, Wyoming looking to account for major personnel losses: Colorado State had a good case that it should have been in the NCAA tournament last season, as they won 26 games and finished third in the conference. But that senior-laden group landed in the NIT, and now Larry Eustachy has to account for the loss of his top three scorers from a season ago (J.J. Avila, Stanton Kidd and Daniel Bejarano). As for Wyoming, Larry Shyatt has just one starter returning (Josh Adams) from a team that got hot in Las Vegas and won the Mountain West tournament.

While Boise State getting healthy was a big factor in them getting hot in conference play, so was the emergence of Webb. In his first season in a Boise State uniform Webb averaged 11.2 points and 8.0 rebounds per game, shooting 55.2 percent from the field and 40.9 percent from three. A versatile offensive weapon at 6-foot-9, Webb could take off in 2015-16.

THE REST OF THE ALL-MOUNTAIN WEST FIRST TEAM:

After dealing with two major injuries on the tail end of his high school career, Pope showed some flashes of his array of skills as a freshman. The next step for the 6-foot-10 forward is consistency, which could come with a season spent working on his body and game as opposed to having to focus on rehab. If he can do that, SDSU has its feature scorer and Pope’s name will continue to circulate amongst those who put together mock drafts.

Rice is the clear choice here, given UNLV’s underachievement in recent years. While many choose to focus on UNLV’s lack of national success when airing their frustrations, consider this: since Rice took over in 2011 UNLV’s finished no higher than third in the Mountain West in any of the four seasons he’s been in charge. Expectations are high in Las Vegas, with UNLV having the talent to be a factor both within the conference and nationally. Anything less could spell trouble for Rice.

ON SELECTION SUNDAY WE’LL BE SAYING … : Are any of these teams capable of getting to the second weekend?

I’M MOST EXCITED ABOUT: Seeing if a player can step forward in the same manner that Derrick Marks did for Boise State last season.

1. Boise State: Derrick Marks has moved on, but the Broncos have a good mix of experience and newcomers to rely on. And James Webb III is going to be a star this season.
2. San Diego State: If Jeremy Hemsley is the answer at the point the Aztecs can win the league outright. But they still need to find dependable perimeter shooters.
3. UNLV: The raw talent is definitely there for the Runnin’ Rebels. But can Dave Rice make all the pieces fit together?
4. Utah State: With all five starters back longtime assistant Tim Duryea could be in for a big year in his debut as head coach.
5. Fresno State: With their entire rotation back, led by Marvelle Harris, this could be a big year for the Bulldogs.
6. New Mexico: The Lobos enter this season with hopes of avoiding the injury bug that derailed their 2014-15 campaign even before conference play began.
7. Colorado State: Larry Eustachy lost a lot from last season, but they’ve added some quality players to make up for that. One name to remember: Emmanuel Omogbo.
8. Wyoming: Larry Shyatt finds himself in a similar situation personnel-wise, with senior guard Josh Adams being surrounded by many new faces.
9. Nevada: While Eric Musselman’s first season at the helm may not churn out too many wins, he and his staff have done a good job on the recruiting trail thus far.
10. Air Force: Dave Pilipovich’s team was one of the better offensive teams in the league from an efficiency standpoint last year. But they have to get better defensively if they’re to make a move up the standings.
11. San Jose State: Already working with limited talent, losing Rashad Muhammad (transferred to Miami) doesn’t help Dave Wojcik at all as he looks to rebuild.