Butler senior guard Roosevelt Jones is one of the Big East’s finest players, but he’s never been known for his shooting stroke. In fact, the 6-foot-4 Jones had only attempted three shots from 3-point range in his entire college career (missing all of them) until Saturday’s game against Marquette.

It only took 126 games at Butler but Jones finally knocked down his first career 3-pointer on a 70-foot heave to end the first half in Milwaukee.

Butler eventually fell to Marquette in the Big East contest.

Jones wasn’t the only player on Saturday to make a three quarters-court buzzer-beater to end the first half. UMass forward Antwan Space also knocked down a shot from similar distance against Fordham. 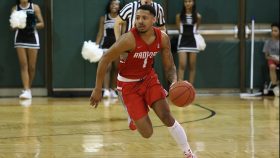 Ben Bentil scored 20 points and Rodney Bullock added 16 as No. 16 Providence dodged a bullet and picked up a win they desperately needed on Tuesday night, knocking off No. 18 Butler, 71-68, at the Dunkin Donuts Center.

I say the Friars dodged a bullet because they picked off a good Butler team on a night where Kris Dunn struggled. The Friars star finished with nine points and seven assists, but he managed just eight shots from the floor as Butler head coach Chris Holtmann put together a terrific defensive scheme to take away the Providence All-American.

The Bulldogs sat in a packed-in 2-3 zone where Roosevelt Jones was essentially tasked with guarding Dunn out to about 30 feet. Butler essentially dared Dunn to be a distributor, and it nearly worked. The Friars as a team shot 5-for-22 from three, and if it wasn’t for the play of Bentil and Bullock on the interior; I’d be remiss if I didn’t also mention Kyron Cartwright here, as he had 13 points and caught fire towards the end of the half.

I don’t think it’s an exaggeration to say that Dunn could have finished with 15 assists had his teammates been able to knock down the looks that he created, and it belies a bigger issue for the Friars. Coming into Tuesday night, Providence had lost two of their last three games, their lone win coming in a hideous performance at Creighton. During that stretch, they shot 13-for-67 (19.4%) from three while taking exactly half of their field goal attempts from beyond the arc. On the season, Providence entered Tuesday night ranked 288th nationally in three-point shooting.

Because it’s not going to change. The defenses that Providence faces are only going to get more and more compact as the likes of Bentil, Bullock, Ryan Fazekas and Drew Edwards continue to miss threes.

As far as Butler is concerned, I’m not sure that Bulldog fans should start getting worried just yet. At this point, their tournament hopes are not in jeopardy because they have exactly zero bad losses. Their Big East titles hopes are likely nothing more than a pipe dream as they are sitting at 2-4 in the league with wins over St. John’s and DePaul and a trip to Creighton looming at the weekend, but that’s not the biggest concern.

If, on a night where Kellen Dunham, Kelan Martin and Jones combine for 52 points while Providence shoots 5-for-22 from three and Dunn is quiet, the Bulldogs cannot beat Providence, it might be time to start questioning exactly what this group’s ceiling is.

Entering Sunday’s game against No. 11 Villanova, No. 18 Butler was already 1-2 in Big East play and in need of a win to keep close to the top half of the conference standings. Chris Holtmann’s Bulldogs were competitive throughout, but they ultimately fell short for two reasons: Villanova’s work on the defensive end, and the continued emergence of Josh Hart in Jay Wright’s offensive attack.

Hart scored 22 points on 10-for-15 shooting and grabbed 11 rebounds, leading the Wildcats offensively in their 60-55 win at Hinkle Fieldhouse.

Hart’s made strides throughout his time at Villanova, going from role player as a freshman to the Big East’s best sixth man (and Big East tournament MOP) as a sophomore. As a junior Hart has been Villanova’s most efficient offensive option, entering Sunday’s game averaging a team-best 15.5 points per game and shooting 54.7 percent from the field and 39.7 percent from three.

On a team loaded with guards who can hurt teams off the bounce, the 6-foot-5 Hart can score on multiple levels. While their efficiency numbers on the season are slightly lower than what last season’s team produced, Hart’s continued growth is a key factor for Villanova as they look to win a third consecutive Big East title.

Sunday night he was the player entrusted with getting the Wildcats key baskets on multiple occasions, and more often than not Hart delivered as he scored 14 of his 22 in the second half.

Villanova’s win wasn’t solely about Hart, however. Playing against a Butler team that also ranks among the ten most efficient offensive teams in the country, Villanova was able to limit the Bulldogs to 35.8 percent shooting from the field. With their perimeter depth Villanova can make defensive switches and not find themselves in mismatches. Add in a senior big man in Daniel Ochefu who can be a deterrent in the post as well as move his feet well enough to keep opposing guards from turning the corner in ball screen actions, and the Wildcats have the pieces needed for a quality defense.

Villanova was able to keep Tyler Lewis in check, as he finished with two points and one assist. And while Roosevelt Jones did score 20 points he didn’t have a single assist, which is rare given his ability to create for others in Butler’s offense. Villanova was able to keep Butler’s best creators from doing just that, and as a result they were able to short-circuit a potent offensive attack.

Butler assists on nearly 53 percent of their made baskets on the season; against Villanova the Bulldogs managed a total of six assists on 19 made baskets.

No 4-0 in Big East play, Villanova sits atop the Big East standings as they did in each of the last two seasons. And if they continue to defend as they have, and Josh Hart continues his development into one of the Big East’s best players, the Wildcats can win another Big East title.

Butler could be without one of its best players for Sunday’s important Big East contest against Villanova. According to a tweet from the Butler basketball account, senior guard Roosevelt Jones is questionable for the 7:30 p.m. tip on Sunday night as he’s dealing with a sprained wrist that was suffered during Thursday’s practice.

More importantly, Butler could lose Jones’ defensive abilities if he sits out against Villanova, which would be a major loss since the Wildcats have so many perimeter scoring threats. If Jones opts to sit out against Villanova on Sunday, he could also choose to recuperate longer since Butler plays lowly St. John’s in their next game on Saturday, Jan. 16.

Roosevelt Jones is questionable for Sunday's game against Villanova with a sprained left wrist suffered in practice Thursday.

Kris Dunn scored 15 of his 20 points and handed out seven of his nine assists in the second half as No. 12 Providence erased an 11-point halftime deficit, knocking off No. 9 Butler in Hinkle Fieldhouse, 81-73, which means that it is now time to seriously start discussing Providence as a Final Four contender.

The Friars, at this point, may very well be the best story in all of college basketball. There were legitimate discussions during the preseason about whether or not these Friars would actually have the ability to make the NCAA tournament. With LaDontae Henton gone, Providence didn’t have a proven secondary scorer. Ben Bentil has more than adequately filled that role, and with Rodney Bullock playing the way he did on Thursday, the Friars look every bit the part of a top ten team and a Big East contender.

Bentil finished with 19 points and five boards, as he had a couple of key buckets and one really important block down the stretch, but the hero of this game was Rodney Bullock. The 6-foot-8 sophomore entered the day having shot just 7-for-26 from beyond the arc on the season. He was 6-for-9 from three on Thursday, hitting finishing with 25 points. Drew Edwards also added 10 points off the bench, including threes on back-to-back possessions early in the second half that helped spark the Providence run.

The Friars are now 13-1 on the season, their lone loss coming to No. 1 Michigan State when Denzel Valentine was in the middle of playing like Magic Johnson.

As far as Butler is concerned, I don’t think it’s time to panic quite yet. In the same way that they matched up well against Purdue the Bulldogs matched up poorly with Providence. They’re going to struggle with dynamic back court playmakers, and there is no one in the country that fits that mold better than Dunn.

This is a team that thrives on their offensive potency, and Dunham plays a huge part in that. He’s not much of a defender, the kind of player that makes up for the points he gives up by outscoring the guy that’s guarding him. With Roosevelt Jones and Kelan Martin playing the way that they currently are, Butler is going to be fine once they get their best scorer back on track.

Butler got off to a slow start on Saturday afternoon, digging themselves a first half hole before a late run gave them a lead that they wouldn’t relinquish.

But as good as Jones was, he wasn’t the story of this game.

The 6-foot-6 forward finished with 25 points and 11 boards off the bench, shooting 5-for-8 from beyond the arc. It was the third straight game that the sophomore finished with more than 20 points in a reserve role; he had 24 points against Indiana State and 20 against VMI after going for 14 points in Butler’s win at Cincinnati.

And if it wasn’t for Martin, Butler may not have won this game. He scored 11 points straight points during a run in the second half that pushed butler’s lead to nine, the first time they were really able to get any separation from the Vols. He also stepped up on a night that Butler’s two best offensive options — Kellen Dunham and Andrew Charbascz — struggled. Dunham shot just 3-for-12 from the floor and -for-11 from three while Charbascz took just three shots from the floor.

This Butler team is going to be fun to watch this year. Unlike the Bulldog teams that we’ve become accustomed to in the past, this group is much more offensive-minded. They want to push tempo. They want to spread the floor. They look to play small-ball, going four-around-one and waiting for Martin and Jones to get mismatches.

They’re never going to be great defensively, not without defensive playmakers, but there aren’t many teams in the country that are as explosive as them.