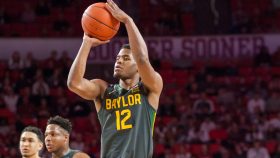 Trailing by two at the half, the third-ranked Sooners went on a 21-0 run to take control of the Diamond Head Classic title game. Buddy Hield scored 34 points and Jordan Woodard added 28 for Lon Kruger’s team, but can they be a national title contender? Read more about those possibilities here.

Hawai’i 79, Auburn 67: Roderick Bobbitt reached the 30-point mark for the second straight game, scoring 30 points on 8-for-13 shooting from the field and 8-for-8 from the foul line (he scored 32 on Oklahoma Wednesday night), to lead the Rainbow Warriors to third place at the Diamond Head Classic. The depth advantage for Eran Ganot’s team, which also received 21 and eight boards from Stefan Jankovic, is why they were able to close the game on a 19-4 run.

Horace Spencer and Tyler Harris both fouling out for Auburn, and Kareem Canty had to spend some time on the bench in the second half with four fouls. Canty led the Tigers 22 points, bouncing back from his 1-for-15 outing against Auburn, and Bryce Brown added 20.

BYU 84, Northern Iowa 76: Dave Rose’s Cougars picked up a quality win for their resume in the Diamond Head Classic’s fifth-place game, using a 19-2 first half run to establish the distance needed to hold off the Panthers. Chase Fischer scored 26 points, hitting four more three-pointers, and Kyle Collinsworth tallied 12 points, 17 rebounds and six assists to lead the way for BYU. UNI scored 24 points off of 15 BYU turnovers, but their inability to hit shots (40 percent from the field) when not benefitting from Cougar mistakes proved to be the difference.

Washington State 82, New Mexico 59: The Mountain West took another hit Christmas Day, as the Lobos were blown out by Washington State in the seventh place game at the Diamond Head Classic. Josh Hawkinson, who played just seven minutes in the first half due to foul trouble, scored 12 of his 19 in the second half and as a team Wazzu shot 54.2 percent from the field and 11-for-20 from three.

Hawkinson led five Cougars in double figures. After getting off to a good start to the season the Lobos once again struggled defensively and with turnovers, and they have many kinks to work out ahead of their Mountain West opener Wednesday night.

Buddy Hield and Jordan Woodard, Oklahoma: Hield and Woodard combined to score 62 points on 20-for-27 shooting from the field in their win over Harvard.

Zena Edosomwan, Harvard: Oklahoma did not have an answer for the Harvard big man, who tallied 25 points and 16 rebounds in a losing effort.

Roderick Bobbitt, Hawai’i: Bobbitt shot extremely well in scoring 30 points in a win over Auburn, shooting 8-for-13 from the field and 8-for-8 from the foul line.

Cullen Neal, New Mexico: Things got so bad for the redshirt sophomore that he was benched for the entire second half in the Lobos’ loss to Washington State. In eight minutes Neal went scoreless and didn’t have an assist, committing five turnovers.

New Mexico’s three-point shooters: Neal wasn’t the only one who struggled, as the Lobos shot 0-for-10 from three on the day.

Patrick Steeves, Harvard: In 28 minutes off the bench Steeves made just one of his eight shots from the field, scoring two points.

Isaiah Cousins, Oklahoma: Cousins didn’t have the night teammates Hield and Woodard had, scoring seven points on 2-for-11 shooting.

HONOLULU (AP) Buddy Hield had 27 points and nine rebounds as No. 3 Oklahoma remained unbeaten, escaping with an 84-81 victory over Hawaii in a Diamond Head Classic semifinal on Wednesday night.

The Sooners (10-0) got a career-high 17 points from Khadeem Lattin and 14 from Isaiah Cousins.

Hield was 7 of 16 from the field, including 5 of 9 from 3-point range, and he made all six of his free throw attempts. He had 18 points at halftime.

Roderick Bobbitt scored a career-high 32 points and had six assists for the Rainbow Warriors (8-2), who had their four-game winning streak snapped. It was their first loss on their home court this season.

Hawaii had a chance to tie it at the buzzer, but Bobbitt’s desperation 3-pointer was no good.

There were six ties and 12 lead changes in the game.

The game was tied at 75 on a slicing layup by Hawaii’s Isaac Fleming with 4:22 remaining, but the Sooners took the lead for good on two free throws by Hield with 1:42 to play.

Bobbitt drew a foul attempting a 3-pointer and made his first two attempts to get Hawaii within 83-81 with 4 seconds to play. He missed the third free throw intentionally and Lattin grabbed the rebound for Oklahoma.

Lattin made the first of two free throws before Hawaii got the ball back with 1.2 seconds to play.

Oklahoma got off to a hot start as Hield scored 16 points in the first 9 minutes. Akolda Manyang’s banker with 10:42 left in the half gave the Sooners a 25-9 lead, but the Rainbow Warriors went on an 8-1 run to take the lead at 27-26.

Hawaii scored 18 points off 12 Oklahoma turnovers and held the edge in bench points, 23-10.

Both teams were 24 of 33 from the free throw line.

Oklahoma: It was the 28th time in Hield’s career that he eclipsed the 20-point mark. He had a career-high 33 points against Creighton on Dec. 19, and 25 against Washington State on Tuesday.

Hawaii: It was the highest-ranked opponent for the Rainbow Warriors since beating No. 2 Kansas in the 1997 Rainbow Classic. It is their best start to a season since winning their first eight games in 2004.

Oklahoma will play Harvard for the tournament title Friday.

Hawaii will meet Auburn in the third-place game Friday.

Today, we are previewing the Big West.

Picked to win the Big West in the preseason, Russell Turner’s UC Irvine Anteaters managed to win the league’s conference tournament and throw a scare into Louisville before falling in the NCAA tournament. And with three starters back from that team, guards Alex Young and Luke Nelson and center Mamadou Ndiaye, the expectation entering the 2015-16 campaign is that UCI will once again be the preseason favorite to win the Big West.

The Anteaters got the job done defensively, limiting opponents to 39.4 percent shooting from the field and blocking nearly five shots per contest with the 7-foot-6 Ndiaye (who’s also more skilled offensively than he’s given credit for) being their most imposing deterrent in the paint. That will once again be the case, even with the one starter they’ll have to replace being a forward in Will Davis II who was one of the conference’s best defensive players.

In total UCI returns ten players with game experience, and the combination of that and a non-conference schedule that includes games against Boise State (as part of the Wooden Legacy), Saint Mary’s, Utah State, Oregon, and Kansas should have the Anteaters prepared to make a run at the Big West crown.

Who’s the biggest threat to UC Irvine? One option is UCSB, even with the graduation of Alan Williams. Head coach Bob Williams welcomes back three of last season’s top four scorers led by senior guard Michael Bryson. The Gauchos will need junior Eric Childress to take a step forward at the point, and in sophomore guard Gabe Vincent they have a player who can be an All-Big West selection in the very near future. UCSB’s greatest question mark lies in the post, where it would be unfair to expect one player to “replace” Alan Williams. But if they can get a collective effort on the boards, UCSB can threaten for the Big West’s top spot.

There’s also a Long Beach State team that’s chock full talented transfers eager to hit the ground running. Dan Monson will have options such as Nick Faust (Maryland), Roschon Prince (USC) and Gabe Levin (Loyola Marymount) at his disposal, which will help with the loss of all five starters from last season. The most important of those departed starters was point guard Mike Caffey, a three-time first team All-Big West selection. Who steps forward in that leadership role, with junior Branford Jones and senior A.J. Spencer being two possible options with Spencer having missed last season due to injury, will determine just how good the 49ers can be.

Hawai’i, which reached the Big West title game in March, returns most of last season’s rotation and under first-year head coach Eran Ganot can hit the ground running as they look to start a new era. The focus may be on the top half of the Big West but as UC Davis, which won the regular season title despite being picked seventh in the preseason poll, proved last season a contender can come from a seemingly unlikely position. With that in mind keep an eye on Cal Poly, which returns its top five scorers from last season led by senior forward Brian Bennett.

While UC Irvine enters the season as the clear favorite to win the Big West, they won’t lack for challenges along the way. And as the Anteaters would tell you themselves, while a regular season title is great their season (along with the rest of the Big West’s) boils down to three days in Anaheim in March.

Bryson’s become a more consistent player throughout his time at UCSB, and last season he managed to earn first team All-Big West honors. Bryson averaged 13.9 points and 4.8 rebounds per game, shooting 44.4 percent from the field and 36.0 percent from three. And with Alan Williams moving on, he’ll be asked to produce even more offensively.

THE REST OF THE PRESEASON ALL-BIG WEST TEAM: