Trailing by one point at the half, Indiana appeared to be in good shape at No. 8 Michigan State. However the fact that they were unable to slow down Denzel Valentine, who scored 15 first-half points, was a major concern for Tom Crean’s Hoosiers. Sure enough the national Player of the Year candidate continued on his tour de force in the second half, scoring another 15 points and dishing out seven assists as the Spartans rolled to an 88-69 victory.

For the game Valentine finished with 30 points, five rebounds, 13 assists and just one turnover. Of Michigan State’s 48 second half points, Valentine had a hand in 29 of them with all seven of his assists resulting in Michigan State layups. It was a dominant performance from one of the nation’s best players, a versatile guard whose four games missed due to injury may have led to some overlooking him when it comes to those national Player of the Year conversations.

When Valentine’s on everything else flows smoothly for Tom Izzo’s team, as his ability to both score and create results in quality looks for teammates who would struggle if they had to get that part of the job done themselves.

The biggest beneficiary Sunday afternoon was forward Matt Costello, who finished the game with 22 points and 11 rebounds. Of Costello’s ten made field goals (10-for-12 FG) five were assisted by Valentine, and he accounted for 13 points and seven rebounds in the second half. As a team Michigan State shot 63.3 percent from the field and assisted on 16 of their 19 made field goals in the second half, turning a tight contest into a blowout.

Tum Tum Nairn returned the court for the first time in seven games, but he played just two minutes and his time on the court will be managed carefully by Izzo moving forward. For many teams not having your point guard at full strength would represent a crippling blow, but that hasn’t been the case for Michigan State thanks in large part to Valentine. Michigan State went 4-3 in those seven games without Nairn, but the three losses were by a total of three points.

Valentine’s ability to make his teammates better will be a key factor down the stretch for Michigan State, and that skill was what led to the Spartans blowing out Indiana on Sunday. 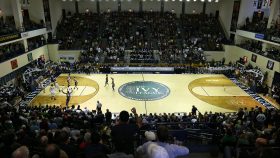 Having lost three straight games for the first time in nine seasons, No. 11 Michigan State entered Saturday’s game against No. 7 Maryland in dire need of a win. In spots such as these a team expects their best and most experienced players to step forward, and that’s exactly what happened in the Spartans’ 74-65 win over the Terrapins at the Breslin Center.

Sure, seniors Denzel Valentine and Bryn Forbes led the way offensively, with Valentine all over the stat sheet with 17 points, 13 rebounds and eight assists and Forbes scoring a game-high 25 points. But the contributions of another senior, forward Matt Costello, cannot be overlooked.

Playing against Maryland’s talented front line Costello more than held his own, finishing the game with 15 points, 12 rebounds and three blocked shots. And he did all of this on an ankle that was less than 100 percent — he was in a boot on Thursday — outplaying Maryland’s interior tandem of Robert Carter and Diamond Stone. Michigan State entered the game in need of not only a win but an emotional spark as well, and Costello was the one who provided that boost.

Michigan State’s season wasn’t on the line by any stretch of the imagination; there are still plenty of games to be played and this is a group still getting used to playing without starting point guard Tum Tum Nairn. But after their loss to Nebraska, playing with a lack of emotion that was surprising for a Tom Izzo-coached team, there was a call that had to be answered. And Michigan State managed to get the job done, with the players who are expected to lead the way doing just that.

Maryland will be fine moving forward. Rasheed Sulaimon struggled offensively, shooting 2-for-11 from the field, and the same goes for Stone as he scored just six points off the bench. But Melo Trimble, who entered the game in a slump, got going and finished with 24 points. That should only help him moving forward, and regardless of what happens when it comes to the Big Ten regular season title there’s no denying that Mark Turgeon’s team has the personnel needed to make a run deep into March and even to early April.

Saturday night was about Michigan State more than anything. A program that’s been lauded for its toughness and its fight needed to display those attributes against a high-level opponent, and they managed to do just that. Forbes and Valentine may have produced the most noteworthy stat lines but it was Matt Costello who set the tone, enabling the Spartans to pick up a much-needed victory.

Not to mention a bear-hug, a butt-slap and a head-rub for his coach on the way off the floor:

Put it on a poster! @MSU_Basketball big man Matt Costello posterizes a Nebraska defender with this dunk. Wow! https://t.co/PzY8iHmxGM

Having lost their last two games, No. 11 Michigan State is looking to get back on track with Nebraska visiting the Breslin Center. Senior forward Matt Costello provided a boost of sorts in the first half, using a jab step and one dribble to get past Nebraska freshman Ed Morrow.

But Costello wasn’t willing to simply settle for a layup; instead, he used his reach to throw down a one-handed dunk. Quality finish from the 6-foot-9 Costello.

On the heels of their worst defensive showing of the season in a 13-point loss at Iowa, No. 1 Michigan State rebounded Saturday afternoon with a 69-61 win at Minnesota.

Tom Izzo’s Spartans limited Minnesota to 33.8 percent shooting from the field and 5-for-20 from three, a far cry from the numbers Iowa was able to produce Tuesday night. The Hawkeyes shot better than 48 percent from the field, the best a Michigan State opponent has shot this season, routinely finding quality looks and outworking the Spartans on both ends of the floor.

That wasn’t the case against Minnesota. And while it is clear that Iowa has more talent than Minnesota, getting back to playing the hard-nosed defense their head coach demands of them is a positive response from a Michigan State team still playing without its leader in Denzel Valentine.

Offensively Michigan State did what it had to do in order to pick up the victory, but they’re still a bit disjointed without the versatile senior playmaker. Michigan State committed 11 turnovers, resulting in 14 Minnesota points that helped Richard Pitino’s team stay in the game. In three games without Valentine, Michigan State is averaging 14 turnovers per game, nearly three more than their average in the 12 games Valentine’s played in (11.2 tpg).

When the Spartans took care of the basketball Saturday they were able to produce points more times than not, shooting 49 percent from the field and 17-for-20 from the foul line.

Bryn Forbes led four Spartans in double figures with 20 points, and Matt Costello added 17 and 15 rebounds with fellow big men Gavin Schilling (eight points, five rebounds) and Deyonta Davis (ten points, four rebounds) also being solid performers. It goes without saying that there’s a clear difference in this team with Valentine off the court; it would be incredibly difficult for any team to not skip a beat with their best player out of the lineup.

With Valentine sidelined the “little things” become that much more important for Michigan State, and after being outworked in Iowa City the Spartans were closer to their true selves against Minnesota.