After two duds in Saturday’s national semifinals, No. 2 Villanova and No. 1 North Carolina produced a national title game we won’t soon forget.

The Wildcats won 77-74 on a Kris Jenkins three as time expired, but his heroics came 4.7 seconds after North Carolina’s Marcus Paige hit a double-clutch three to tie the game.

And here’s the game-winner from Jenkins, who’s earned the nickname “Big Smooth” from his teammates, with Villanova winning its second national title in program history. The first came in 1985, when the Wildcats knocked off Big East rival Georgetown.

After settling for perimeter shots too often during the early portion of the first half, No. 1 North Carolina began to find its groove offensively against No. 10 Syracuse. The Tar Heels made 68 percent of their two-point attempts in the first half, and they improved on their 11-point halftime lead by continuing to work the ball inside against the Syracuse zone.

One example of this: a nice touch pass from Marcus Paige to Kennedy Meeks for an uncontested dunk. The play began with Justin Jackson being trapped on the baseline by two Syracuse defenders, with Paige flashing to bail out his teammate. Jackson found Paige, who in one motion found Meeks.

WASHINGTON (AP) Seventh-ranked North Carolina got off to a fast start at the ACC Tournament as the regular-season champion routed Pittsburgh 88-71 Thursday to take the first step toward its first conference title since 2008.

Four players scored in double figures as the Tar Heels (26-6) shot 58.9 percent from the floor and pulled away from Pittsburgh (20-11) in front of a boisterous crowd in baby blue at Verizon Center.

Joel Berry II led North Carolina with 20 points on 7-of-8 shooting, and Brice Johnson added 19 on 8-of-11 shooting. The Tar Heels will face either No. 19 Duke or Notre Dame in the semifinals Friday.

Jamel Artis and Michael Young each scored 19 points for the Panthers, who still should be NCAA Tournament-bound despite the loss.

Artis started the game with a personal 8-0 run in the first 91 seconds. Looking spry despite playing 24 hours earlier, Pitt led by as many as eight early until the Tar Heels found their groove.

A turnover by James Robinson with 47 seconds left in the first half led to an emphatic dunk by Johnson that gave UNC the lead. While the Tar Heels went on a 12-0 run that carried over into the second half, Pitt had a 4:52 scoring drought.

The Panthers tied the score at 45 with 15:52 left on a 3-pointer by Sheldon Jeter. The tie lasted 15 seconds until Paige connected from long range, and UNC kept Pitt at arm’s length.

The Tar Heels went on an 11-0 run that put the game out of reach and showed just how dangerous they can be when hitting jumpers.

UNC freshman Kenny Williams’ 3-pointer during the big second-half run was the first basket of his college career after starting 0 for 12. It was the seldom-played guard’s first shot attempt since Valentine’s Day.

Coach Jamie Dixon, who referenced the NIT if his team lost its ACC Tournament opener, said it was in “pretty good shape” after beating Syracuse. The Panthers – who entered ranked 53rd in the RPI with the 41st-toughest strength of schedule – are 8-8 against top-50 opponents.

Arena workers replaced one of the nets at halftime because the bottom had become frayed. Not coincidentally, it was the end North Carolina scored on when it made five straight shots to end the first half.

Pittsburgh: Cameron Johnson and Robinson, the heroes of the second-round win against Syracuse, combined for to shoot 5 of 18 from the field. … With his fourth assist, Robinson became the fifth player in school history to reach 600 in his career.

North Carolina: Reached the ACC Tournament semifinals for the fifth time in the past six years. … The Tar Heels improved to 5-0 in neutral-site games this season.

North Carolina: Faces the winner of No. 19 Duke vs. Notre Dame in semifinals Friday. 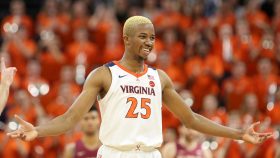 It’s Friday, which means time for another episode of the NBC Sports College Basketball Talk Podcast. Host Rob Dauster and Raphielle Johnson got together to discuss some of the major happenings from this week, most notably No. 20 Duke’s win at No. 5 North Carolina.

How concerned should we be about the Tar Heels, especially their guard play? What can Duke do to keep this run going with another player (Matt Jones) being lost to injury?

Also discussed are the three other losses taken by teams ranked in the Top 5 this week, No. 3 Oklahoma, No. 4 Iowa and No. 5 Maryland. Which one has the biggest issues to deal with in regards to preparing for a run in the NCAA tournament? There’s also chatter about whether or not a certain Kentucky Wildcat deserves to be in the national Player of the Year conversation, which Big East team is best equipped to play deep into March (Villanova or Xavier?), and some of the big games on the schedule for this weekend.

As always, you can subscribe to the podcast on either iTunes or Stitcher. Or if you so choose, just click the “play” button on the audio player below. Thanks for listening!

Marcus Paige added 15 points for the Tar Heels (21-4, 10-2 Atlantic Coast Conference), who shot 59 percent to stay atop the league ahead of the next renewal of their fierce rivalry with Duke.

UNC had plenty of balance, shared the ball and got out in transition in arguably their best performance in weeks, using a 13-0 second-half burst to blow the game open. UNC finished with 26 assists on 32 baskets, 24 points off turnovers and scored 16 fast-break points after managing a combined five in the past two games.

Michael Young and James Robinson each scored 15 points to lead Pitt (17-7, 6-6). But the Panthers shot 37 percent and committed 19 turnovers, and a strong effort on the glass did little to offset their troubles.

The Tar Heels were playing their first home game in two weeks after a difficult three-game road trip that started with losses at Louisville and Notre Dame. Then came Tuesday’s game at Boston College, where the Tar Heels struggled against a winless league team then had a scare when Hall of Fame coach Roy Williams briefly collapsed in a second-half huddle after an attack of vertigo and had to leave the sideline for the rest of the game.

Williams was back in the office on Wednesday’s off day, returned to practice Thursday and told reporters Friday he was fine and even cracked jokes about a two-decade history with vertigo dating to his Kansas years.

Getting back home certainly helped everyone feel better. After wrestling with shooting struggles for much of the past month, UNC’s offense kicked back into an efficient and balanced gear, while Paige – the player the Tar Heels are practically begging to jolt free from a prolonged shooting slump – looked more like his old self against the Panthers.

That included one second-half play in which he caught a crosscourt pass from Theo Pinson in transition and made sure to step back behind the arc before burying a 3-pointer.

The Panthers had lost three of four since a 5-2 league start coming in, including 65-63 on a late tip-in at No. 12 Miami on Tuesday. And Pitt again had trouble getting their offense going, failing to crack 70 points for the third straight game.

UNC: Justin Jackson scored 14 points. … UNC made 8 of 15 shots from 3-point range and 13 of 15 free throws. … Jackson and Pinson had six assists each. … UNC managed just one offensive rebound.

No. 9 North Carolina’s trip to Chestnut Hill to play ACC cellar dweller Boston College was expected to be a routine one, with Roy Williams’ team taking care of business and heading back home. The game was anything but routine, beginning with Williams’ decision to start a completely different front court from the one that struggled in a loss at Notre Dame Saturday night.

Add in Williams having to leave the sidelines after collapsing in the second half and the Tar Heels’ struggles throughout the night against Jim Christian’s Eagles, and North Carolina was in position to suffer a stunning setback. Yet in the end North Carolina won 68-65, thanks to a timely four-point play from Marcus Paige and 20 points from sophomore forward Justin Jackson.

Due to his recent shooting slump Paige has been the most often discussed Tar Heel of late, but given his overall track record there were few who thought he wouldn’t find a way to turn things around. He is North Carolina’s best player, and ultimately how far the Tar Heels go this spring will depend upon how well Paige plays. But he can’t do it all alone, and in the case of Jackson the Tar Heels have a gifted wing capable of making plays offensively…when he chooses to do so.

Against Boston College an aggression that hasn’t been seen from Jackson on a consistent basis this season, since a stretch in late November of three straight games of 20 points or more, was present. He attacked the Boston College defense on a night in which North Carolina’s perimeter shots once again missed the mark (5-for-16 3PT), scoring 20 points on 9-for-11 shooting from the field. The benching seemingly lit a fire under Jackson, giving North Carolina a much-needed boost in a game that turned out to be far more difficult than many expected.

The question now is what Jackson does to build on this performance. The skill is there, but this is a matter of having the mindset needed to make plays without being prodded. Brice Johnson has struggled with similar issues throughout his career, but he put forth the best basketball of his career earlier this season with Kennedy Meeks out of the lineup.

North Carolina struggled for much of the night, even before Williams had to leave the sidelines, and that cannot be glossed over. The Tar Heels have the talent needed to produce better performances than this, one that nearly led to them losing a game they were expected to win convincingly. But there is the positive of Jackson’s performance to take from it, as he looked to attack the Boston College defense consistently and experienced success in doing so.

The Tar Heels will face tougher competition in their remaining ACC games, and with that comes the need to have Jackson continue to play at this level. Tuesday night represents a step forward for Jackson, but how big of a step that is will be determined by what he does over the next month.