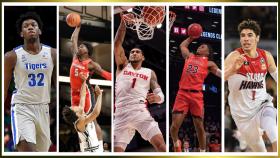 While many of the key contributors to a team that was Villanova’s greatest threat in the Big East return, Xavier has some holes to fill in the rebounding department. With James Farr and Jalen Reynolds both moving on, the Musketeers will have to account for the loss of their top two rebounders as the 2016-17 season approaches. Trevon Blueitt, who averaged 6.1 rebounds per game last season, is back, but others including Norfolk State transfer RaShid Gaston and Sean O’Mara will have to step forward for Chris Mack’s team.

Another option is 6-foot-5 forward Malcolm Bernard. Bernard, who played last season at Florida A&M after spending his first two seasons at Charleston Southern, announced Monday that he will join the Xavier program as a graduate student. He’ll be eligible to compete immediately as a result, with one season of eligibility remaining.

Well… Looks like I'm going to be a Musketeer….. I will be attending Xavier University for my final year #Team95 pic.twitter.com/yt14CulF8g

As a redshirt junior at Florida A&M Bernard averaged 14.4 points and 7.1 rebounds per game, doing the majority of his damage inside of the arc despite playing at a listed weight of just 195 pounds. Bernard also averaged 4.3 assists and 2.3 steals per game for the Rattlers in 2015-16. Adding a capable rebounder on the wing will help the Musketeers as they look to not only chase down the reigning national champions but also go further in the NCAA tournament than they did last season.

Xavier will return four starters from a team that won 28 games, and went 14-4 in Big East play, before losing to Wisconsin at the buzzer in the second round of the NCAA tournament.