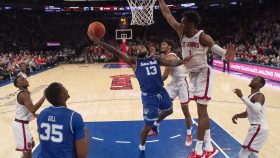 With three talented big men in A.J. Hammons, Isaac Haas and Caleb Swanigan, No. 20 Purdue has one of the nation’s top front court rotations. But if the Boilermakers are to be a factor in the Big Ten and nationally when the NCAA tournament begins, they’d going to need more consistent play from their guards. The perimeter struggled Sunday night in Champaign, and the end result was an 84-70 loss at Illinois.

There’s no denying the fact that the junior tandem of Malcolm Hill and Kendrick Nunn is a talented one, as they entered Sunday’s game combining to average more than 36 points per game. And they were even better against Purdue, combining to shoot 17-for-27 from the field with Hill scoring 30 points and grabbing eight rebounds and Nunn finishing with 22 points and five boards.

They were the catalysts for an Illinois offense that shot 54.2 percent from the field and forced the Boilermakers to go small in an attempt to match up. But the biggest issue for Purdue was their offense rather than their defense, and Illinois had something to do with that.

Illinois used a sagging man-to-man for most of the game, taking away post touches and essentially daring the Purdue guards to become playmakers without the aid of getting the ball in to Hammons, Swanigan and Haas. And outside of P.J. Thompson, who came off the bench to score 12 points and dish out four assists, the Purdue guards were unable to make the Fighting Illini pay.

Purdue shot 7-for-22 from three, with many of those looks not being of the quality they can be when the big men are drawing in extra defenders. Add in 16 turnovers, which Illinois converted into 24 points on the other end, and it was the offense that was Purdue’s biggest problem Sunday night. That put more stress on their ability to get stops, and with Rapheal Davis dealing with foul trouble and Hill and Nunn red hot, the Boilermakers were unable to do so on a consistent basis.

By no means is Purdue out of the Big Ten race, even though they’re now two games out in the loss column, because there’s still plenty of basketball to be played. But if they’re to have a chance at winning the league title, Purdue’s perimeter contributors have to be consistent in their production.

Illinois junior guard Kendrick Nunn’s had an eventful week, beginning with the birth of his son. Sunday night Nunn made his return to the court after missing the Fighting Illini’s game at No. 5 Michigan State, and he made his presence felt throughout the game against No. 20 Purdue.

Nunn’s biggest highlight: the above dunk on Purdue freshman forward Caleb Swanigan. Swanigan appeared to have designs on challenging Nunn at the rim, but once in mid-air he pulled his hand back. Almost as if he were resigned to his fate.

On Wednesday, we released our Midseason Awards, which included the NBCSports.com All-American teams, the Player of the Year, the Coach of the Year and the Freshman of the Year.

We also named our Most Improved Player. That decision wasn’t quite as easy as it seemed, so here is a complete list of the nation’s most improved players:

Ben Bentil, Providence: As we wrote yesterday, Bentil had some promising moments as a freshman and found his way onto a few Breakout Stars lists in the preseaosn, but I don’t anyone could have predicted that he would end up being a guy that averages 19 points and eight boards for a team ranked in the top ten. He’s got a legitimate case to be an all-american. Who saw that coming?

Buddy Hield, Oklahoma: Hield was the Big 12 Player of the Year last season and, depending on where you looked, he found his way onto some all-american teams as well. But he did all that as a guy that was more-or-less a spot-up shooter that did much of his damage in transition. This season, he’s become Oklahoma’s late-clock option. He’s getting isolations. He’s the ball handler in pick-and-roll actions, and he’s far more effective doing it as well. Last season, he scored 21 points in 42 totals isolations, according to Synergy’s logs. This season, he’s already had 29 isolation possessions and scored 31 points. When you factor in possessions that end in a pass, he’s creating 1.083 PPP in ball screen actions as compared to 0.825 PPP last season.

Kelan Martin, Butler: This may be a situation where Martin simply needed to get the opportunity, but he’s become the most consistent offensive weapon for a Butler team that’s currently ranked in the top 20. Martin, who is averaging 14.1 points after scoring 7.7 per game last season, began the season as Butler’s sixth-man but played his way into the starting lineup with Kellen Dunham’s shooting slump.

Elijah Brown, New Mexico: Brown has usurped coach’s son Cullen Neal as the star of the Lobo back court. A redshirt sophomore, Butler transfer and the son of former NBA coach Mike Brown, Elijah is averaging 19.4 points, 5.6 boards and 3.1 assists.

Moses Kingsley, Arkansas: As a freshman, Kingsley played 10 minutes a game and averaged just 3.4 points and 2.5 boards. As a sophomore, he’s averaging 17.1 points, 9.9 boards and 2.5 blocks, turning into a guy that may actually be the best big man in the SEC. Chew on that for a second.

Michael Gbinije, Syracuse: The fifth-year senior has become one of the best guards in the ACC and is one of the only reason that Syracuse has a reason to believe they can play their way into an NCAA tournament bid. He’s averaging 18.0 points, 4.7 boards and 4.3 assists.

Yante Maten, Georgia: Maten, a sophomore, has become the anchor on the interior for a Georgia team that still has NCAA tournament hopes. The 6-foot-8 Michigan native is averaging 16.5 points and 7.2 boards.

Desi Rodriguez, Seton Hall: When he’s not getting benched for yelling at his coach, Rodriguez is a pretty important piece for the Pirates, averaging 12.0 points and shooting 38.1 percent from three after going 1-for-12 as a freshmen.

Kendrick Nunn, Illinois: Nunn, along with Malcolm Hill, is the reason this season isn’t a total loss for the Illini. He’s averaging 18.5 points as a junior.

Zach LeDay, Virginia Tech: LeDay averaged 3.5 points for South Florida in 2013-14. He’s averaging 14.7 points and 9.5 boards for the Hokies this season and went for 22 points and seven boards in the win over No. 4 Virginia on Monday night.

George King, Colorado: King is a redshirt sophomore that didn’t play much as a freshman and then sat out last season as Tad Boyle knew that he wouldn’t get much playing time. It paid off, as King is Colorado’s second-leading scorer, averaging 13.9 points and shooting 43.1 percent from three.

Bradley Hayes, Georgetown: Hayes was a total non-factor in his first three seasons with the Hoyas but has emerged as the best low-post scorer for this Georgetown team, averaging 9.4 points and 6.6 boards.

THE ALL-AMERICANS: There is also a small subset of guys that belong on the most improved list that were already pretty damn good.

Illinois guard Kendrick Nunn will undergo surgery to repair a torn ligament in his left thumb on Wednesday, a source told NBCSports.com.

Nunn, a lefty, is expected to be out for eight weeks, which will keep him on the shelf until mid-December.

The college basketball season begins on Nov. 13th. Big Ten regular season play starts for the Illini on Dec. 30th while the Braggin’ Rights game against Missouri is held on Dec. 23rd. If all goes according to plan, Nunn should be back in the lineup by then, but he will likely miss non-conference battles against Providence and Notre Dame as well as a tournament that features UAB, Iowa State and Virginia Tech. Illinois plays UAB, one of the nation’s best mid-major programs, in the opening round of that event.

Nunn averaged 11.1 points and 3.5 boards for Illinois last season. He’ll be a starter when he returns to full health. Illinois also lost starting point guard Tracy Abrams to a torn ACL earlier this offseason. On the bright side, freshmen like D.J. Williams and Aaron Jordan are going to be plenty of experienced come Big Ten play.

CHICAGO (AP) Illinois has added starting guard Kendrick Nunn to its long list of injured players with the season less than a month away.

Coach John Groce said Thursday at Big Ten media day that Nunn injured his left thumb in practice this week. The junior was expected to see a hand specialist Thursday.

Groce said he wasn’t sure about the extent of the injury or whether Nunn had broken a bone. It wasn’t clear how long Nunn will be out.

Sophomore forward Leron Black had knee surgery earlier this month that is expected to keep him out up to six weeks. Freshman guard Jalen Coleman-Lands is out with a stress fracture but expected back by the Nov. 13 opener against North Florida. Guard Tracy Abrams will miss the season.