The injury-depleted Musketeers led by as many as 23 points before Marshall roared back in the second half, pulling within two possessions with 21 seconds left. C.J. Burks’ 3-pointer made it a five-point game.

Kerem Kanter made two free throws to help Xavier prevail. A 3 by Jon Elmore at the buzzer ensured the final margin.

Xavier played without starters J.P. Macura (blurred vision) and Kaiser Gates (dizziness). Freshman Naji Marshall, who was moved into the starting lineup, took a hard fall near halftime and did not play the second half.

“For us, it’s a great win for our team to say, ‘Hey, your best player isn’t going to play very well. You’re going to sit two guys that don’t play one minute, and then a guy that fills in for them doesn’t play in the second half.’ I don’t know how many teams can battle through that, so we’ll take it,” Xavier coach Chris Mack said.

Tyrique Jones added 14 points and 11 boards for Xavier while Sean O’Mara and Quentin Goodin chipped in 14 points each as Xavier (11-1) foiled the Thundering Herd’s bid to claim a first Top 10 win since 2006.

Although Marshall (8-4) entered the game with the nation’s eighth-ranked offense (90.2 points), Xavier held the normally frenetic juggernaut to a season-low 27 first-half points.

A 15-0 run near the game’s start provided Xavier with initial separation.

“That was partly them but partly us. We were nervous. We had freshmen out there. If you have one or two leaks against this team, it’s tough,” Marshall coach Dan D’Antoni said.

Ajdin Penava had 25 points and nine rebounds for the Thundering Herd. He scored just nine points before the break, playing abbreviated minutes due to two fouls.

“He goes out, we go on a little bit of a run. Well, he was in the entire second half and we could never really get him in foul trouble and go at him like we did in the first half,” Mack said.

Led by Penava and Burks, who scored 14 of his 18 points after halftime, Marshall mounted a comeback bid. A 10-0 run set the tone, but the Musketeers persevered despite 29.2 percent second-half shooting and a shrinking lead.

The Herd chipped away significantly in the last 10 minutes. Xavier, playing with unusual personnel combinations, struggled to establish consistency.

The Musketeers made 23 of 26 free throws and controlled the rebounding battle 46-31 en route to the victory.

Elmore entered the game averaging 24.2 points, good for third place in Division I, but finished with 16. He added nine assists.

Xavier finished its non-conference home slate with a 9-0 record including back-to-back wins over ranked Baylor and Cincinnati teams. The Musketeers also capped a six-game home stand on a high note and extended their non-conference home winning streak to 39.

Marshall returns to campus for a four-game home stand against Eastern Kentucky, Southern Miss, Louisiana Tech and Western Kentucky. The Thundering Herd are 7-0 at home.

NEW YORK (AP) Trevon Bluiett matched his career high with 24 points and No. 5 Xavier dominated from start to finish in a 90-72 victory over Marquette on Thursday night in the quarterfinals of the Big East Tournament at Madison Square Garden.

The Musketeers took advantage of foul trouble by Marquette star center Henry Ellenson to have a big advantage in points in the paint early and finished with a 42-32 difference.

Xavier (27-4) advanced to Friday’s semifinals to face the winner of third-seeded Seton Hall and sixth-seeded Creighton.

It will be the Musketeers second straight trip to the semifinals. They lost to Villanova in last season’s championship game.

This was the third time Xavier beat Marquette this season with the first two both decided by eight points.

Xavier opened on an 11-2 run with Ellenson, the conference’s freshman of the year and its leading rebounder, picking up his second foul just 3 minutes into the game. He was taken out of the game but when Xavier started having its way inside and took a 15-4 lead, he was back with 14:20 left in the half. The Golden Eagles went to a 2-3 zone to try and keep him from picking up another foul but it didn’t work.

Ellenson, who finished with 14 points and three rebounds, scored eight straight points for Marquette as the Golden Eagles drew within 26-21. With 2:44 left in the half Ellenson and Bluiett got tangled up near midcourt and both went down to the court. An official review found that Ellenson tripped Bluiett and he was assessed a Flagrant 1 foul – his third.

The Musketeers opened the second half on a 10-3 run and the rout was on with Xavier leading by as many as 28 points. The closest Marquette got was 17 points.

Marquette: The Golden Eagles entered the game first in the conference in steals (7.8) and they are second in assists (16.3). … The 101 points against St. John’s in the opening round was the first time the Golden Eagles broke the century against a Big East opponent. They joined the Big East for the 2005-06 season.

Xavier: The Musketeers entered the game first in the conference in assists (16.4) and they are second in steals (7.2). … Myles Davis leads the Big East in free throw shooting percentage (85.9). … Seven players have led the Musketeers in scoring in at least two games this season. … Chris Mack was named national coach of the year by the U.S. Basketball Writers Association.

Xavier: faces the winner of Creighton-Seton Hall in the semifinals on Friday.

ROSEMONT, Ill. (AP) Trevon Bluiett scored 15 points and No. 7 Xavier used an impressive burst spanning the halves to put away DePaul for an 86-65 victory on Saturday.

The Blue Demons struggled to score after Xavier switched to a 1-3-1 zone late in the first half and never recovered.

Tommy Hamilton IV scored 13 of his 15 points in the first half, and Billy Garrett Jr. finished with 18 points. But DePaul committed 15 turnovers and its reserves finished with just 12 points, compared to 42 for Xavier’s backups.

The Blue Demons also were hurt by a pair of costly fouls on Joe Hanel late in the first half. The sophomore forward was called for over the back while going for a rebound, and then went chest to chest with Jalen Reynolds, drawing a technical.

The result was a pair of free throws for Myles Davis and Reynolds and a 40-32 lead for Xavier with 1:14 to go. Edmond Sumner tacked on a jumper for the Musketeers with 22 seconds left, and the Blue Demons trailed by nine at the break after leading by as many as nine in the early going.

Reynolds and Davis each scored 10 for Xavier, which led by as many as 26 on its way to its five win in the last six games in the series. The Musketeers also beat the Blue Demons 84-64 on Jan. 12.

Xavier: Bluiett had two points on 1-for-4 shooting in the first half. … The Musketeers earned their fourth consecutive Big East road win. They also improved to 9-1 away from Cintas Center this season. … Xavier missed its first nine shots of the game and 11 of its first 12 overall.

DePaul: Women’s basketball coach Doug Bruno was recognized during the first half with a commemorative ball in honor of his 600th career win on Jan. 15 at Butler. … Hamilton fouled out with 5:35 left.

Jay Cohen can be reached at http://www.twitter.com/jcohenap 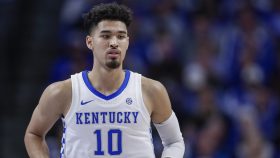 NCAA makes Johnny Juzang eligible at UCLA for next season

Houston’s White out for year after injuring knee in workout

Jalen Reynolds had 15 points and 11 boards and Trevon Blueitt chipped in with 15 of his own at No. 7 Xavier went into The Dunk and knocked off No. 10 Providence, 75-68.

It was the first time in 20 years that Xavier has beaten a top ten team on the road, and that win came in 1996 against Cincinnati, which is the shortest road trip that the Musketeers can possibly make.

The difference in this game, as it turned out, was the 1-3-1 zone that Xavier employs. It’s an ideal defense to take away what Kris Dunn does well, eliminating the ball-screen actions and isolations that make him such a nightmare to try and guard. The zone forced Dunn to be a playmaker, and while he was able to create open looks for his teammates, those shots once again did not fall.

Providence finished the night shooting 7-for-34 (20.6%) from beyond the arc after starting the night missing 18 of their first 20 long-balls. It’s a constant theme with the Friars, and one I wrote about on Sunday. When dudes not named Ben Bentil and Kris Dunn show up for Providence, they can beat anyone in the country.

On Tuesday night, Rodney Bullock, Kyron Cartwright and Junior Lomomba combined for 17 points on 5-for-26 shooting.

But this game was more about Xavier than it was Providence, at least in my eyes.

The Musketeers might be the Big East team best suited to make a run in March. They can play multiple styles defensively. They have size and physicality up front with Reynolds and James Farr. Their perimeter attack is equally long and athletic, with the likes of Remy Abell, J.P. Macura and Edmond Sumner capable of guarding multiple positions. Trevon Bluiett is a poor man’s Georges Niang, a slow-footed combo-forward that blows by bigger defenders and overpowers smaller guards. They have shooters to space the floor and a potential difference-maker in Sumner, a redshirt freshman who was as atrocious on Tuesday night — he shot 0-for-9 from the floor and looked totally shook handling the ball as the Friars made a late run — as he has been promising throughout the rest of the season.

Their deep and balanced and matchup proof. Their only two losses this season have come in a game where Sumner was stretchered off the court three minutes in and in a game where a unheralded sophomore point guard for Georgetown turned into Steph Curry for a half.

And that’s to say nothing of the mentality that this team program has. They are always going to be the toughest team on the floor. Always. That may matter to head coach Chris Mack just as much as winning the game does, and the guys on his roster have totally bought into that idea.

Put it all together, and what you have is a team that is built for a postseason run.