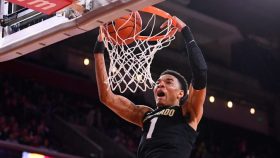 Thursday’s Things To Know: The Pac-12 gets wild and the greatest comeback of the year

As the younger brother of former Tennessee power forward Jarnell Stokes, it shouldn’t come as a surprise that 2017 power forward Isaiah Stokes plays with similar authority. At one point a dual-sport athlete with football also getting attention, the younger Stokes has decided to focus on basketball with a host of high major programs looking to land his commitment. And Thursday afternoon at the adidas Summer Championships in Las Vegas, Stokes displayed the strength and power he’s been known for.

Late in the M33M Elite program’s win over the Iowa Barnstormers, Stokes threw down a two-handed dunk that shattered the backboard and can be seen above. Stokes fell onto the chards of glass that accumulated under the basket, and he needed three stitches to close up a wound on his left pinky finger. Stokes told ESPN.com that while he had intentions of breaking the backboard, he “didn’t think I’d be able to do it.”

Games on that court were delayed for a couple hours due to the clean-up process and the need to bring in a replacement basket. According to ESPN.com Stokes is down to five schools: Memphis, Tennessee, Florida, Iowa State and South Carolina.