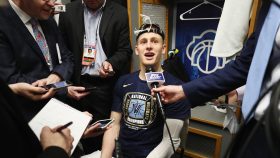 Who will follow Donte DiVincenzo’s breakout path to the NBA next?

Tuesday afternoon it was announced that Wisconsin junior forward Ethan Happ has decided to enter the 2018 NBA Draft, and he will do so without hiring an agent. The 6-foot-8 Happ would have the ability to return to school for his senior season if he did not like the feedback he receives from NBA scouts and executives while going through the draft process.

Wisconsin junior Ethan Happ has declared for the 2018 NBA Draft, but will not hire an agent. pic.twitter.com/J4YmtL0qdG

The deadline for players to withdraw their names from the NBA draft is May 30, ten days after the conclusion of the annual NBA Draft Combine.

As a junior the 6-foot-8 Happ averaged 17.9 points, 8.0 rebounds, 3.7 assists, 1.5 steals and 1.1 blocks in 30.8 minutes per game, leading the Badgers in all major statistical categories. As a result Happ was a first team All-Big Ten selection for the second consecutive season, becoming the eighth player in program history to earn multiple first team all-conference honors throughout the course of his Wisconsin career.

Happ’s NBA decision is a big one for a Wisconsin program that loses just one senior from this season’s team (Aaron Moesch, who played six minutes per game). Brad Davison, a Big Ten All-Freshman Team selection, Brevin Pritzl and Khalil Iverson are all due back, and two players who missed significant periods of time due to injury in D’Mitrik Trice and Kobe King will be back as well.

An Austin Tillotson half-court shot as time expired gave the Raiders a three-point win on Senior Day. Tillotson, who finished with 20 points, hit the game-winner just seconds after Loyola’s Andre Walker tied the game at 90 with a three-pointer of his own. Walker finished with 22 points and Eric Laster 26 for the Greyhounds, with Colgate also receiving solid performances from Alex Ramon, Sean O’Brien (18 points apiece) and Tom Rivard (17 points).

No. 6 Maryland 86, Michigan 82: The Terrapins had their struggles with turnovers and dealing with Michigan’s Mark Donnal in ball screen situations, but they were able to do enough to pull out the victory in College Park. Robert Carter Jr. scored 17 points and Jake Layman 16 to lead the way for the Terrapins, who ended a two-game losing streak in the process. Donnal scored 22 of his 25 in the second half for the Wolverines, who once again played without the injured Caris LeVert.

Utah 80, USC 69: The Runnin’ Utes handed USC its first home loss of the season, becoming the first Pac-12 team to pick up two road weekend sweeps in conference play this season (they also swept the Washington trip). Jakob Poeltl was too much for USC, as he accounted for 29 points on 11-for-13 shooting, 13 rebounds, four assists and four steals. Jordan McLaughlin scored 20 points and Julian Jacobs and Bennie Boatwright 17 apiece for USC, but they were unable to mount a charge similar to their comeback from a 15-point deficit to beat Colorado Wednesday night.

Obi Enechionyia, Temple: 26 points on 10-for-20 shooting and seven rebounds in the Owls’ three-point win at Houston.

Alec Peters, Valparaiso: 32 points and 11 rebounds in the Crusaders’ 90-74 win over Detroit.

Boston College: The Eagles’ season may have hit its nadir Sunday night, as they lost 74-48 at Wake Forest. At one point Jim Christian’s team trailed 37-4.

Khristian Smith, Indiana State: Two points on 1-for-9 shooting in the Sycamores’ 84-51 loss to Wichita State.

James Ford, Quinnipiac: Four points on 1-for-7 shooting and three turnovers in the Bobcats’ 63-59 loss to Manhattan.