Dave Rice has been fired as the UNLV head coach, sources told NBCSports.com.

The Runnin’ Rebels have lost five of their last six games, including three straight to begin league play. All three of those Mountain West losses have come to teams expected to finish in the bottom of the league standings, and all three were by a single-possession. On Saturday, in a loss at Wyoming, the Rebels blew a 17-point first half lead with the nation’s third-leading scorer, Josh Adams, had just 12 points.

Rice, who played with Larry Johnson and Greg Anthony at UNLV, is in his fifth season as the head coach of the Rebels. He reached the Round of 64 in his first two years with the program, but missed on the tournament the last two seasons. In 2014-15, Rice led UNLV to a 18-15 record and an 8-10 finish in the MWC, good for seventh place.

Todd Simon, a current assistant coach on the staff, will be named the interim head coach.

Rice brought in a talented 2015 recruiting class, headlined by local product and five-star recruit Stephen Zimmerman, but he’s been unable to find a way to get Zimmerman heavily involved in the offense.

UNLV does have the talent to make some noise this season. Zimmerman is one of the nation’s most talented big men while Patrick McCaw, the team’s leading scorer, is a potential NBA player on the wing. Throw in a handful of veteran guards, former five-star recruit Dwayne Morgan and redshirt junior big man Ben Carter, and there are pieces on this roster.

But it may be too late for this team to do anything other than run the table and earn their league’s automatic bid.

UNLV is the latest to join in the trend of hosting their own NBA scouting combine, following in the footsteps of Kentucky and LSU.

The Runnin’ Rebels will hold their event on October 23rd and 24th at the Mendenhall Center, UNLV’s practice facility, sources told NBCSports.com. The expectation is that all 30 NBA teams will be in attendance.

The Runnin’ Rebels once again have a stockpile of pro talent on their roster. Stephen Zimmermann is projected as a lottery pick in the 2016 NBA Draft, while the likes of Goodluck Okonoboh, Patrick McCaw, Dwayne Morgan Jr. and Derrick Jones are talented enough that they will get plenty of attention from NBA scouts during the upcoming season.

Kentucky hosted their scouting combine over the weekend, with as many as 70 NBA scouts reportedly in attendance. LSU is holding their combine this week.

ESPN.com was the first to report the news. 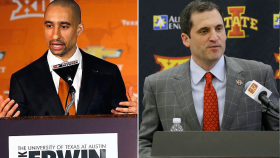 As we get closer to the start of the 2015-16 college basketball season, let’s take a look at the head coaches who need to have a good season in order to feel safe. While the list of coaches on CBT’s “hot seat” have had poor seasons and lost their jobs before, keep in mind that the last two No. 1 selections for this list kept their jobs the following season, including Maryland coach Mark Turgeon, who is currently thriving in College Park.

1. Tom Crean, Indiana: Indiana enters the 2015-16 season with top-25 talent and high expectations, but Crean finds himself atop the hot seat list for failing to meet expectations at Indiana. Crean’s now entering his eighth season as the Indiana head coach, and only once in the previous seven seasons — the 2012-13 season — have the Hoosiers been good enough to be considered a true title contender. That’s not enough, but not only is Crean struggling to find the success the Hoosier fan base craves on the floor, but the dismissal of three more players this offseason hasn’t made life any easier off the floor. Indiana’s president isn’t pleased with the off-the-court developments and many prominent Indiana alums have been vocal about the Hoosiers falling below expectations. A big season would go a long way towards quieting Crean’s doubters.

2. Josh Pastner, Memphis: Much like Crean at Indiana, Pastner has achieved success but faltered compared to a passionate fan base’s expectations. Memphis missed the postseason altogether for the first time in 15 years with last season’s 18-14 record and the team’s best returning player, Austin Nichols, transferred to Virginia, following Nick King and Pookie Powell out the door. Pastner is going to rely heavily on the freshman Lawson brothers to make a postseason appearance immediately, but in a city that became accustomed to the success of John Calipari’s Tigers, will they be satisfied if we’ve already seen Peak Pastner?

3. Brian Gregory, Georgia Tech: After a 12-19 season and 14th place finish, Gregory is back for his fifth season at Georgia Tech. He’s never finished above ninth in the ACC. Gregory has coached one team to the NCAA tournament in his last 11 seasons and that came at Dayton in 2010. The local recruiting momentum is also limited for Georgia Tech under Gregory. The Yellow Jackets went 0-for-7 recruiting prospects from Georgia in the Rivals150 in the Class of 2015. In the Class of 2016, that number is 1-for-11.

4. Kevin Willard, Seton Hall: Entering his sixth season at Seton Hall, Willard has finished above .500 twice and owns a 30-60 mark in the Big East. Having never made the NCAA tournament as a head coach, the pressure is on Willard to produce even though experienced guards Sterling Gibbs and Jaren Sina both transferred out of the program.

5. John Groce, Illinois: Illinois missed the NCAA tournament in back-to-back seasons for the first time since 1992 and that isn’t sitting well with Illini fans. Groce has never finished above seventh in the Big Ten and he hasn’t been able to reel in a lot of big-named recruits that Illinois finds itself a finalist for. Transfers like Darius Paul and Aaron Cosby haven’t lasted and proved to be harmful as replacements for those missed recruits. Illinois fans expect results and Groce needs to make the NCAAs again.

6. Barry Hinson, Southern Illinois: The once proud Southern Illinois program has had to endure Hinson’s three-year tenure. He’s thrown his own players under the bus during a postgame press conference and publicly remarked about his job security this spring. The Salukis own a 40-57 record and 19-35 mark in conference play under Hinson and he lost five transfers this offseason, three of them freshmen.

7. Donnie Jones, UCF: UCF was successful in Conference USA, but its been a rough back-to-back stretch for the program. Jones has never made the NCAA tournament and his 2010-11 wins were vacated for using ineligible players. Jones was also suspended three CUSA games and the program put on probation. Now he’s 25-36 overall and 9-27 in the American the last two seasons.

8. Travis Ford, Oklahoma State: It’s never a good sign when the team’s athletic director and biggest public booster, T. Boone Pickens, publicly have to back Travis Ford, which is precisely what happened in Stillwater this offseason. It’s a far worse sign that Ford owns no NCAA tournament wins since 2009 despite recruiting McDonald’s All-Americans like LeBryan Nash and Marcus Smart, who both played for multiple seasons.

9. Dave Rice, UNLV: Rice has proven to be a formidable force on the recruiting trail, but that success has yet to translate on the Thomas and Mack Center court, as the Rebs have missed the last two NCAA tournaments. Rice was feeling the heat a little bit this offseason when rumors of Ben Howland looking at UNLV began swirling, but Howland is now at Mississippi State and Rice landed hometown McDonald’s All-American Stephen Zimmerman. Rice still doesn’t own any NCAA tournament wins, and with yet another talented recruiting class, he needs a strong season.

10. Kim Anderson, Missouri: Anderson’s first season at Mizzou was a disaster as the team went 9-23 and 3-15 in the SEC. It’s not looking much better in the future as the Tigers lost some key pieces — namely Jonathan Williams III and Teki Gill-Cesear — to transfer.