This story on Emoni Bates was originally published on July 11th, 2019.

NORTH AUGUSTA, S.C. — Any veteran of the Peach Jam knows that the event is a circus, one complete with packed gyms, fire codes and a cadre of extremely large security guards that are there to keep reporters and autograph-seekers from overwhelming the players and the standing room-only crowds from overtaking the court.

Typically, these crowds are at their biggest when the best soon-to-be seniors square off. When Harry Giles squared off with Ben Simmons at the 2014 Peach Jam, the doors for the gym were closed by halftime of the game before it. When Julius Randle and Andrew Wiggins faced off two years before that, the crowd on the track above the courts stood five deep.

What isn’t normal is for a 15U game taking place 16 hours before coaches are even allowed in the gym to become the main event, but that is precisely what happens Bronny James and his Strive For Greatness program roll into town. The gym is at capacity before Bronny’s shoes are even tied. By the time the game tips off, there is a line of a hundred people waiting to get in, craning their necks to catch a glimpse of the son of the best high school player anyone has ever seen.

It’s fitting, then, that after Bronny’s first game at the Peach Jam on a Wednesday afternoon, as the crowds there to see the most hyped high school basketball player ever follow him out the door, the best prospect since LeBron strolls into the gym, laces up his shoes and shows the suddenly-sparse crowd why he, Emoni Bates, is on track to be the face of the new preps-to-pros era.

The comparisons to Kevin Durant are as unfair as they are inevitable.

There is a certain caliber of basketball player that simply cannot fairly be put in the same sentence a 15-year old. Kevin Durant, when his achilles are intact, may very well be the best basketball player on the planet today. At the very least, he is the best scorer in the game, a wispy, 7-foot sniper with the skills of a shooting guard.

“He’s very young and has a lot of maturing to do physically, but in my 20 years in this business he was as good as anybody I have ever seen as a freshman,” said Rivals recruiting analyst Eric Bossi of Emoni Bates. “His skill level, athleticism and ability to create a shot are way beyond his years and he plays with a fire and alpha mentality you don’t usually see in a 15 year old.”

Does that remind you of anyone?

I won’t be the one to put their names in the same sentence.

Or even the same paragraph.

But Bates, who is now 6-foot-9 after growing seven inches since sixth grade, has that same slender build, that same ability to knife through defenses, that same ease with which he buries 25-foot threes off the bounce. Perhaps most importantly, on the floor, the soft-spoken Bates is as an uber-competitive asshole in all of the best ways.

“That’s what you call the alter-ego,” his father, Elgin, said with a laugh.

Elgin’s presence is important to this story. He is a former Kentucky Wesleyan guard that spent time playing professionally overseas. He’s also a skills trainer. Bates Fundamentals is not only the name of his basketball training business in Ypsilanti, Michigan, but it is also the name of the grassroots team that he runs on Nike’s EYBL circuit. There’s a reason for that. Elgin wants to keep Emoni close. He knows what being a high school basketball phenom can do to a psyche of a child in a man’s body. He might be the favorite to be the No. 1 pick in the 2022 draft, but as of today, he cannot even get a driver’s license.

Emoni might have won a state title in Michigan as a freshman, but he still gets punished when he doesn’t do his homework.

“Don’t let this go to his head or bother him due to the fact that it can get overwhelming and crazy,” Elgin said. “Sometimes it’s trying when you try to get out of the gym and everyone is grabbing his arm, and as a parent, I have to notice that. I have to pay attention to his body language. If he’s uncomfortable, if he doesn’t want to be in a certain situation, we get him up out of there.

“The main thing for me is being a parent and protecting my child.” 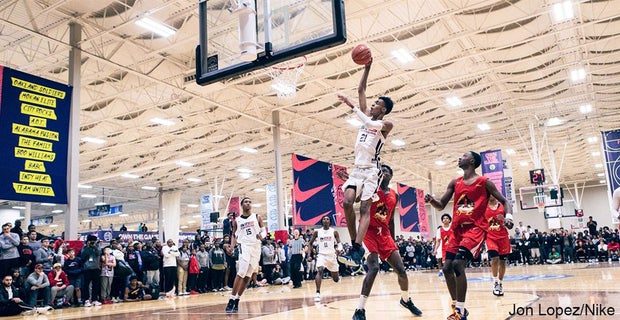 At the same time, Elgin wants his son to be aware. If everything goes according to plan, Emoni is looking at earning nine figures between his NBA salary and endorsement money. If, as expected, the NBA does away with the age limit for 2022, that money will start rolling in just three years from now. Emoni is not going to be under his wing forever, and he needs to know that the people he comes across are not always going to have his best interest at heart.

Four years ago, I wrote a story on Renardo Sidney. In 2005, Sidney was Emoni Bates, a 6-foot-8 14 year old from Jackson, Mississippi, that tore up Sonny Vaccaro’s famed ABCD All-American camp. He left home and moved to Los Angeles. He and his family took money. He let the hype get to his head. “I could honestly say I probably was ‘Hollywood,'” Sidney told me at the time. “I just thought I made it. I stopped working. I thought that my talent would get me to the NBA.”

That, of course, is not how it played out.

Sidney was barely a top 20 prospect when he graduated high school. Neither USC nor UCLA would accept his commitment because of the potential eligibility issues he faced. He eventually enrolled at Mississippi State, but he wasn’t cleared to play for a year and a half. When I spoke with him, he was on his third comeback attempt, having dropped 35 pounds to get down to 305 in order to get signed by a minor league team in Canada.

The key to avoiding that, Elgin believes, is to give his son a support system, a structure to his life, a humility to understand that nothing is guaranteed until a signed contract says ‘guaranteed.’

To date, it’s been successful.

And as long as Emoni Bates continues to stay the course, his name could very well be the first name that Adam Silver calls on draft night in 2022.