On September 28th, 2017, the NBA implemented a new format for the NBA draft lottery, one that is designed to try and put a stop to the amount of tanking that happens in the NBA.

Frankly, the NBA is being naive if they believe that this will curtail tanking within their league.

As long as there is an incentive to be bad, NBA teams are going to try to be bad the second that they realize their organization’s goals — making the playoffs, earning a top four seed, being in contention for an NBA title, whatever — are not going to be met. That is particularly true for small-market teams. You need stars to win in the NBA, and if you cannot land stars through free agency or via a trade, the only way is then through the draft. The best way to amass the lottery tickets you need to have the best chance of drafting a Kevin Durant or an Anthony Davis or a LeBron James is to be bad and get a higher pick.

This lottery reform proposal does not change that fact.

This rule change would not have stopped The Process, it would just have made it more unlikely that Sam Hinkie and the 76ers would have landed the picks they wanted to get.

The only way to truly curtail tanking is to reward teams for winning.

And I present to you the best way to do that.

(This idea was first mentioned by the On The Ball podcast back in 2017. Credit them for coming up with it. Credit me for perfecting it.)

Instead of having a lottery determine who will pick first in the NBA Draft, hold a five-day, 14-team single-elimination tournament at a neutral site. Essentially, the NBA would be holding the professional equivalent of the ACC tournament. The bracket would look something like this: 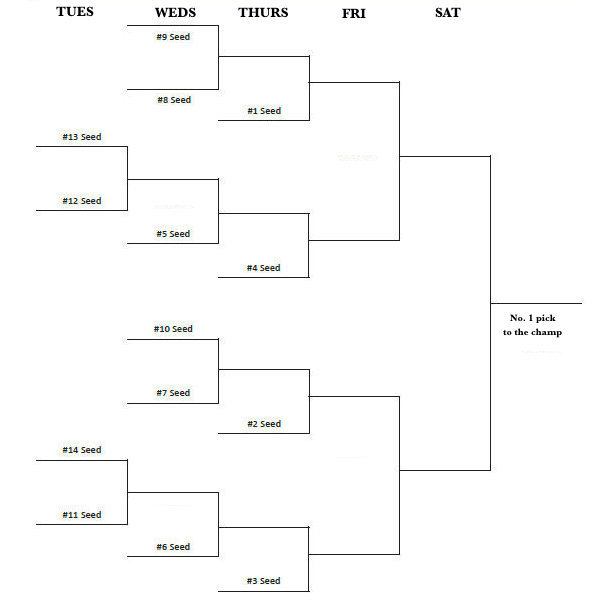 The schedule would be fairly simple: End the NBA’s regular season on a Sunday, start this tournament on the Tuesday and run it through Saturday, when the title game will be played. Then on that Sunday, start the NBA Playoffs, giving those teams a full week of rest while creating 13 more TV games for the league to sell. Use the money generated from selling the broadcast rights to create a payout structure for the players, so that they also have something to play for beyond the chance for their organization to draft someone that is going to take their job.

For simplicity’s sake, let’s say that there would be $100 million in potential winnings. It could get split up like this:

But more than just the games, this would create the kind of buzz that we see every March during conference and NCAA tournaments. Everyone loves filling out brackets. Everyone loves mid-week afternoon sports, especially when you can bet on mid-week afternoon sports. Doing this for hoops at the highest-level feels like a no-brainer, especially for a sport that has been as pro-gambling as the NBA has been.

The winning organization would earn themselves the No. 1 pick in the NBA Draft. The team that loses in the final would get the No. 2 pick. There could even be a third-place game to determine the No. 3 and No. 4 picks. After that, the rest of the draft would go in order of the worst record. This would more or less disincentivize tanking. Having the worst record in the league would not only ensure that you have the toughest road to actually getting the first pick in the draft — winning five games in five days against better teams would not be easy to do — but would lock you into nothing more than the No. 5 pick. It’s not often that franchise-changing talents are found at pick No. 5.

More to the point, better seeding in this tournament would make winning a priority for every team in the league until the final day of the season, and it would make a situation like what happened with Miami on the last day of the 2017 season — when the Heat needed the Nets to beat Chicago to get the No. 8 seed in the East and the Nets decided to “rest” their best players — much more unlikely. Sure, there will still be teams that try and lose because they match up better with, say, the No. 6 seed than the No. 7 seed or situations where playoff teams will be not be playing their starters because they are locked into a spot, but this fixes one of the biggest issues facing the NBA currently: that as many as a third of the teams in the league are actively trying to lose by the end of the year.

There would be some logistical loopholes to work through.

For starters, you’d have to convince the NBA Players Union that this is actually a good idea, and making pros play five games in five days might not be the easiest thing in the world to do. The other issue would be where the games get played. Holding the event in, say, New York or Chicago or LA every year would likely ensure that all the seats in the arena are sold, but that would create a competitive advantage for the Knicks or the Bulls or the Lakers. You could hold the tournament in the arena of the team that finished the previous season with the worst record in the league, but if that is, say, Detroit or Sacramento, just how many fans are actually going to travel that far on short notice?

But those are minor details.

In the macro, eliminating tanking would make the regular season more compelling and meaningful while, in the process, potentially creating an event that will be circled on the calendar by sports fans every single year.

There is no downside.

So, Commissioner Silver, when you’re ready to talk this over, you have my number.