The West Region has an intriguing draw with Gonzaga gaining the top seed and Michigan, a Final Four team from last season, getting the No. 2 seed. This region has some potential darkhorse Final Four team and some trendy potential upsets to keep an eye on during the first weekend.

The No. 1 seed is Gonzaga. Despite a loss to Saint Mary’s in the WCC title game, the Bulldogs still earned a No. 1 seed out west as they face the play-in winner between No. 16 seeds Fairleigh Dickinson and Prairie View A&M.

It should be a matchup of a lot of length and athleticism when No. 8 seed Syracuse and No. 9 seed Baylor collide. The health of Orange star guard Tyus Battle (hip) and Bears senior guard Makai Mason (toe) could very well decide who advances in that one.

The best lead-guard matchup of the first round goes down in Hartford with No. 5 seed Marquette and All-American Markus Howard battling OVC champion and No. 12 seed Murray State and Ja Morant. The Golden Eagles struggled down the stretch in Big East play as they went from Final Four darkhorse into a potentially-popular first-round matchup.

A dangerous No. 4 seed could be Florida State as the Seminoles just knocked off Virginia in the ACC tournament over the weekend. Coming off of an Elite Eight appearance last season, the Seminoles could be a sleeper Final Four team out of this region. The Seminoles collide with No. 13 seed Vermont, a team that shouldn’t be taken lightly. The America East champions had a beatdown of UMBC in the conference tournament title game.

After an impressive season in the MAC in which they became a consistent top-25 team, Buffalo gets a No. 6 seed. The Bulls could get a fascinating first-round matchup as they await the winner of the play-in game between No. 11 seeds Arizona State and St. John’s. If the Sun Devils advance past Dayton, it’ll be a matchup of Bobby Hurley-coached programs as he left Buffalo for Arizona State a few years ago.

Texas Tech earned the No. 3 seed out of the Big 12 following an impressive regular-season title. Although the Red Raiders made the Elite Eight last season, the roster is almost entirely different from last season. But the Red Raiders have a star in Jarrett Culver and the nation’s best defense. Northern Kentucky, the No. 14 seed, draws Texas Tech after winning the Horizon League title.

Following a disappointing regular season, Nevada is a No. 7 seed facing No. 10 seed Florida. The Wolf Pack had preseason top-10 hype but failed to deliver results in the regular season behind a loaded roster that is mostly in-tact from last season’s Sweet 16 team. The Gators needed some late wins this season to get in — most notably over LSU in the SEC tournament. Florida is dangerous but extremely inconsistent.

Rounding out the West is No. 2 seed Michigan as the Wolverines attempt to return to the Final Four. Guard Charles Matthews recently returned from injury as Michigan appears to be near full-strength heading into the Big Dance. The Wolverines face No. 15 seed Montana to open things up as the Grizzlies represent the Big Sky. 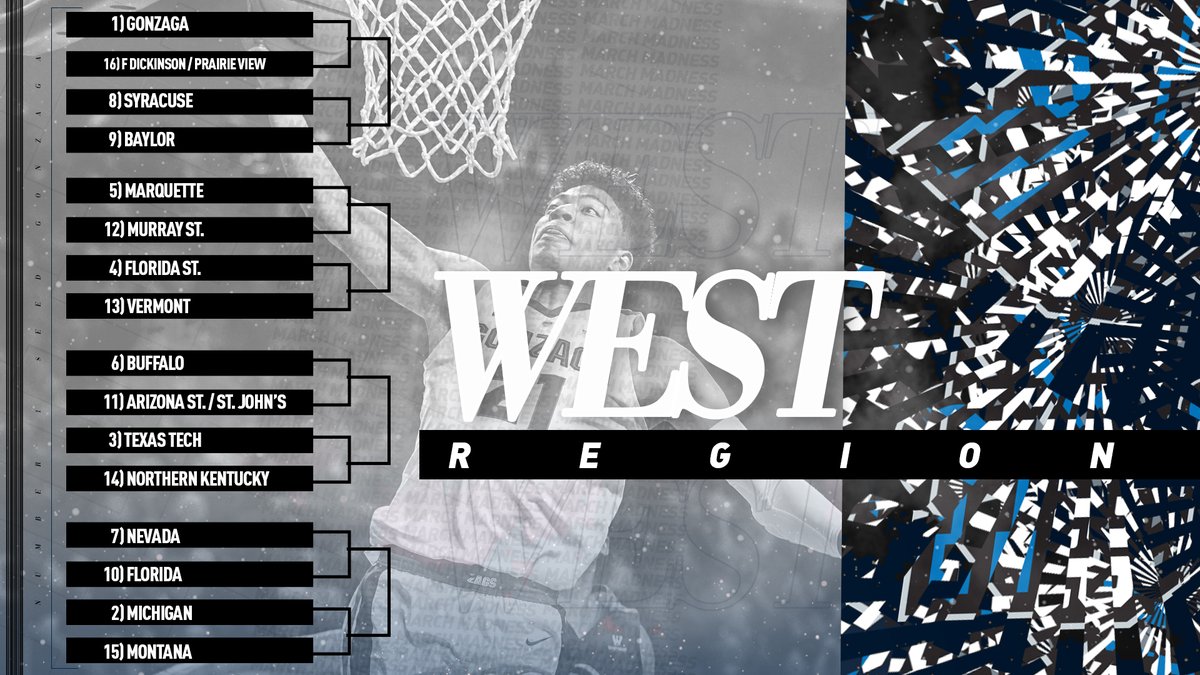