There was some speculation that, after a month of being the best player in the conference, P.J. Washington had overtaken Grant Williams in the SEC Player of the Year race. That seems silly now. Williams was the best player on the Vols all season long, the rock that they ran their offense through, and while it wasn’t enough to get Tennessee an SEC regular season title, it did keep them in contention for a No. 1 seed should they find a way to get out of Nashville with an SEC tournament title. Williams is the frontcourt version of Jalen Brunson — he’s not a look-the-part all-star, but he can absolutely dominate a game because of his intelligence and strength.

SEC COACH OF THE YEAR: Will Wade, LSU

This is a no-brainer for me. Wade beat out two top ten teams for the outright SEC title, and he did it while navigating a season in which he was ultimately suspended for his ties to the FBI’s investigation into college basketball and where one of his players, Wayde Sims, was shot and killed on the night before the first practice of the year. 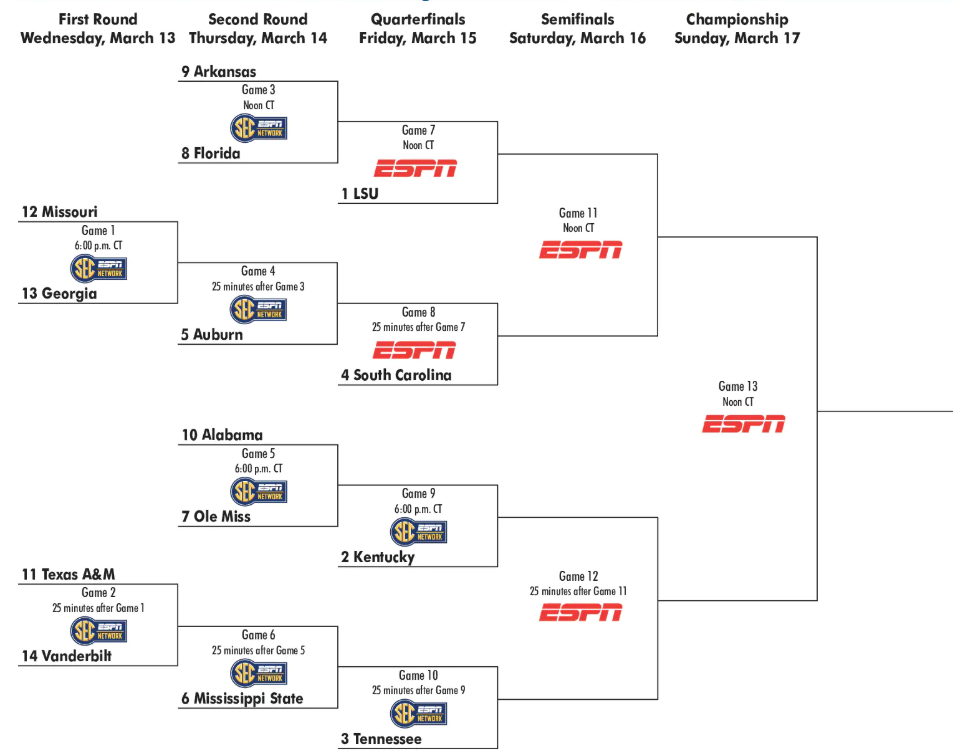 So who do you think is better?

That’s really what this comes down to.

Are you on the side of Tennessee, who just two weeks ago beat the brakes off of Kentucky in Knoxville? Or do you think that Kentucky, who two weeks before that completely embarrassed Tennessee in Lexington?

Personally, I fall on the side of the Volunteers, and that’s mostly because I’m always a sucker for veterans. Tennessee is old and tough and is finally getting Jordan Bone to play like the best guard in the SEC. Kentucky, on the other hand, needs an inconsistent P.J. Washington to be at his best if they are going to be at their best.

I also think the status of Reid Travis really matters here. He’s not always the best option at the five for Kentucky, but as we noted here, he is when Kentucky faces off with Tennessee. The biggest issue that I have with this potential rubber match is that it is going to happen in the semifinals, assuming seeds hold This should be for the SEC title.

The bracket could not have broken down more perfectly for Bruce Pearl’s club. They did not find a way to get into the top four, meaning that they do not get a bye into the quarterfinals, but as long as they dispatch of the winner of Georgia-Missouri, the Tigers will advance to take on SOUTH CAROLINA (+6500), who put together an impressive conference season despite the fact that they struggled so much early in the year. Win those two games, and the Tigers draw an LSU (+500) team that is playing without their head coach Will Wade and without star freshmen Javonte Smart and, potentially, Naz Reid.

BEST VALUE: No one?

The best value is probably Auburn, but I don’t really love any futures in this league tournament. I think the winner will be whoever wins the Tennessee-Kentucky semifinal, but I don’t want to bet on either of them because the odds just aren’t good. The top of the bracket is wide-open, but beyond Auburn, I just can’t see a short-handed LSU or South Carolina beating either Kentucky or Tennessee with an SEC title on the line.

ALABAMA (NET: 58, SOS: 21): The Tide are probably on the wrong side of the cutline heading into the SEC tournament. With just a 2-9 record against Q1 opponents and a pair of Q2 losses — Texas A&M (82) and Georgia State (126) at home — they don’t have enough quality wins to make up for their 17-14 record. That said, they do have a home win over Kentucky and they did play a tough, tough schedule, so a run to the semis featuring wins over Ole Miss (25) and Kentucky again would probably be enough to get the job done.

FLORIDA (NET: 33, SOS: 28): Florida’s resume isn’t all that much different from Alabama’s. The Gators are 3-11 against Q1 with a win at LSU (14) highlighting their profile, but they have just six Q1 and Q2 wins combined and they lost to South Carolina (80) and Georgia (113) at home. It is worth noting, however, that Florida played five games against top 10 NET teams and currently sits at 1-9 against teams ranked in the top 25 of the NET. They had their chances. They missed on them.

Not only will Tennessee and Kentucky be playing for an SEC tournament title in Nashville, I think that they are going to be playing for a No. 1 seed as well. As it currently stands, our Dave Ommen has Kentucky the last No. 1 seed and headed to the Midwest (Kansas City) while Tennessee is a No. 2 seed in the South (Louisville). I think it goes without saying that the Wildcats would much prefer to jump North Carolina and get the No. 1 seed in the South, meaning that they end up playing in the state of Kentucky in the Sweet 16 and Elite 8.

Hell, we can probably put LSU in this conversation as well. They are also sitting as a No. 2 seed in the latest bracket update, and if things break the right way, there’s a non-zero chance that they could end up as a No. 1 seed.

I do think that Tennessee is the better team than Kentucky at this point, so I’ll pick them to win it by knocking off Auburn in the SEC title game.