The top three for Player of the Year in the Big Ten is a tight race, but the way the season ended solidified Winston as the recipient in my mind. Michigan State lost two of their three best players to injury this year, which meant that the entire load of the offense was thrust upon Winston’s shoulders. Not only did he deliver, but he did so while winning a share of the Big Ten regular season title and sweeping in-state rival Michigan in the process. Should I mention that he won a pair of duels against his nemesis Zavier Simpson, too?

Purdue was a borderline top 25 team heading into the season, but in hindsight, that was probably a poor choice. The Boilermakers rolled through the Big Ten and shook off a slow start to the season en route to a share of the Big Ten regular season title. Carsen Edwards put up numbers all season long, but it was the emergence of players like Grady Eifert, Ryan Cline and Trevion Williams that made all the difference in the world for this team. 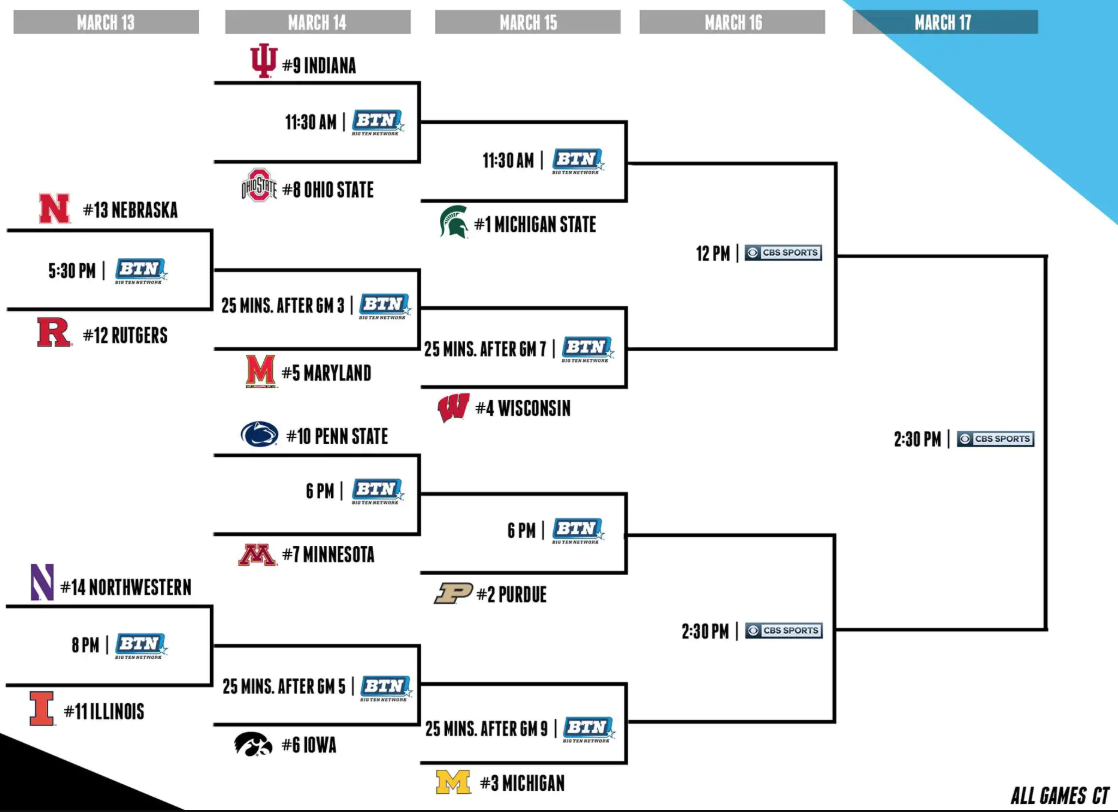 For my money, Michigan State is probably the most likely team to win this tournament. I say that because I trust them on both sides of the ball more than I trust just about anyone else in the conference. Regardless of who has been on the floor for them this season, the Spartans have been elite defensively. They are the ninth-best defense in college hoops, according to KenPom, and they are actually better offensively than they are defensively — that is the Cassius Winston factor.

That said, the concern for me here would be Winston’s legs. At what point does he get tired having to carry such a massive load game in and game out? Maybe it’s not the second game in two days, but three games in three days against good basketball teams is enough to tire anyone, let alone a player that gets the usage Winston gets.

But … I mean, is there anyone else you think you can trust fully in this conference? WISCONSIN (+500) has a superstar that gets Hack-a-Happed late in games. MICHIGAN (+250) can go weeks without scoring. PURDUE (+350) has been great, but I’ll always have a tough time trusting a team where the best player is a streaky, inefficient volume scorer.

So it’s the Spartans, I guess.

The Terps ended up as the No. 5 seed in this tournament, but they actually have a pretty good draw here. If they can get out of the first round they draw the Badgers in the quarterfinals where they can put two different NBA big men on Ethan Happ. I think they can beat Michigan State, assuming Michigan State gets past Indiana, and there is nothing about Purdue or Michigan that truly scares me if I’m Mark Turgeon … other than Zavier Simpson’s sky-hooks.

The two hottest teams in the Big Ten right now were both dumpster fires in January. Indiana lost 12 of 13 games at one point this season while PENN STATE (+1500) opened league play with 10 straight losses.

Indiana is the better value here. They have won four in a row heading into the Big Ten tournament — including wins over Michigan State and Wisconsin — and look like they are finally playing with some confidence. Not only are they getting much better odds, but the way the bracket shakes out works for them. OHIO STATE (+6000) really shouldn’t scare anyone even with Kaleb Wesson back in the mix, and if the Hoosiers get to the quarterfinals, they will play a Michigan State team they swept this season.

The Nittany Lions don’t have quite as good of a draw. They get Minnesota in the first round and Purdue in the quarterfinals. They lost to the Golden Gophers and got swept by the Boilermakers. That said, this is a different Penn State team now. They’ve won five of their last six and seven of their last ten, giving Pat Chambers a puncher’s chance at keeping his job. I like Indiana significantly more in this spot, but that’s mostly because of what they payout with a win.

MINNESOTA (NET: 56, SOS: 37): Minnesota is probably going to be in the tournament regardless of what happens in Chicago. Penn State, at this point, is a Q1 opponent on a neutral court, so a loss to the Nittany Lions would only drop Minnesota to 3-10 against Q1 opponents. That said, I do think they could stand to win one more game. As of today, they are 3-9 against Q1 and 10-12 against Q1 and Q2 with three sub-100 road losses that all qualify as Q2. The win at Wisconsin (15) is going to look very good on Selection Sunday.

INDIANA (NET: 51, SOS: 45)
OHIO STATE (NET: 55, SOS: 53): Another play-out game to kick off a conference tournament!!! Indiana and Ohio State face-off in the 4-5 game of the Big Ten tournament at noon on Thursday, and it will be for the right to still be on the bubble come Selection Sunday. At this point, I think Indiana is in a much better spot. The Buckeyes had a good non-conference season, but they’ve fallen off a cliff in the last month. They lost their last three games without Kaleb Wesson and have lost six of their last eight in total. Indiana, on the other hand, has won four in a row — including Michigan State and Wisconsin — to put themselves in a spot where one win here could end up being enough.

Can anyone in the Big Ten climb up to the No. 1 seed line? I’m not sure that they can. Michigan State will likely be the closest if they can find a way to win the Big Ten tournament, and the Wolverines will also have a shot if things break their way, but I have a hard time seeing either of them leapfrog enough teams to get there. Part of the reason for that is I think Gonzaga and Virginia both have No. 1 seeds just about locked up, and Kentucky will likely play Tennessee and Duke will likely play North Carolina before the finals of their conference tournaments.

There are also some jobs on the line. Is this going to be the end of the Tim Miles era in Lincoln? Will this be the last that we see of Pat Chambers?

I think that it gets wild in this event. I think Indiana gets to the finals. I think that Illinois wins two games. I think that Penn State can win two games. I would love to see Michigan-Michigan State part three or Indiana-Purdue for the tournament title, but I have a feeling we are going to be watching Maryland play Penn State, or something else totally off the board, before the Selection Show commences.