Jarron Cumberland continued his development as a junior, turning into one of the most dangerous scorers in the ACC and certainly the best player in college basketball that looks like he got lost on the way to football practice. There are a number of really, really terrific perimeter players in the AAC this year, but for the Bearcats to end the year with a chance to win a share of the AAC regular season despite all that they lost last season should tell you all you need to know about what Cumberland did.

Sampson is very much in the mix for National Coach of the Year after the way that he was able to make Houston great against after the loss of Rob Gray. The Cougars are a top 15 team in all the rankings — and a top five team in the NET — after going 29-2, winning the AAC regular season title outright and putting themselves in a position that a top two seed in the NCAA tournament is a real possibility. 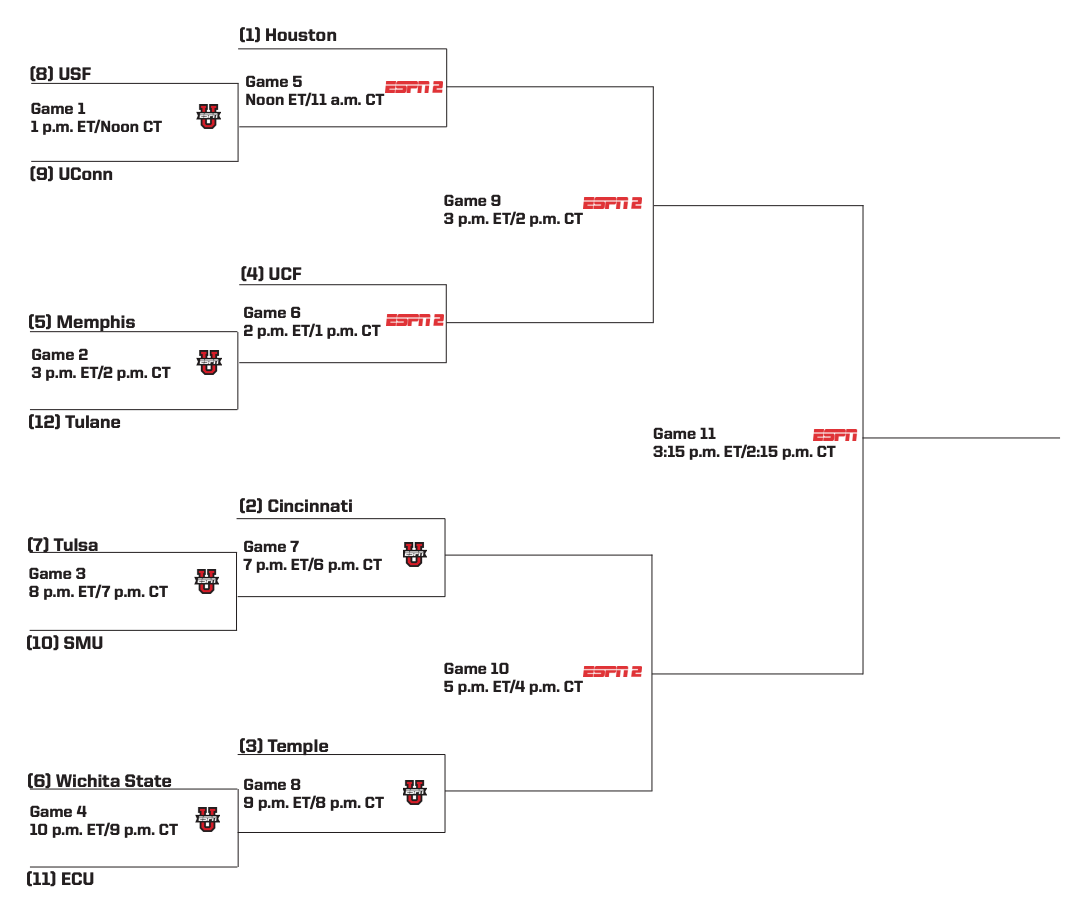 The Cougars are the best team in the conference, and, frankly, I’m not sure that it is all that close. They have myriad talented perimeter players that can take a game over, and I think that their frontcourt is actually somewhat underrated. Corey Davis Jr. and Armoni Brooks get all the attention, but Dejon Jarreau is certainly talented as well.

The one concern I have about this Houston team is that they are going to have a tough semifinal game regardless of who they play. If it’s UCF (+450), they’re drawing the second-best defense in the league, one of the oldest and most talented teams and the group that beat Houston on their home floor just two weeks ago. If it’s MEMPHIS (+900) … well, let’s talk about the Tigers.

I don’t think there is a single coach in the AAC that is happy about the fact that this tournament is going to be played in FedEx Forum, the Tigers’ home arena, this season. That’s because Memphis has been dangerous in their own building. They are 15-2 at home this season — the only losses were by five to Cincinnati and against Tennessee — and you know that place is going to be packed to the gills with out of control Tiger fans. Remember, things get so rowdy in that building that one fan pooped behind an ice cream stand during a game this season.

The Tigers are hot. They’ve won six of their last eight games, and the two losses in that stretch came by a combined nine points at UCF and Cincinnati. They have arguably the most dangerous scorer in the league in Jeremiah Martin — he scored 41 in a half this year, he scored 43 in another game and in his last seven games, he’s averaging 30.7 points — and they play a thrilling style that allows them to score in bunches.

Penny Hardaway knows how to play the heel. He knows how to get Memphis fans into a frenzy. His players leave everything on the floor. This is a dangerous team that is peaking at the right time and playing at home.

They are very clearly the best value bet in this tournament, and at 9:1 odds, I think they’re one of my favorite conference tournament futures, period.

I also think that WICHITA STATE (+1700) is worth a look. The Shockers have won nine of their last 11 games, they have a wins over UCF, Baylor and Providence and Gregg Marshall is a guy that has had plenty of success in tournament settings.

TEMPLE (NET: 50, SOS: 72): Temple benefitted from some excellent bid collusion by the AAC this week, as UCF jettisoned up into the top 30 thanks to wins at Houston and against Cincinnati, which means that the Owls beating UCF in Philly became a Q1 win. Temple has two of those — UCF and Houston (4) at home. With a 23-8 record and just one loss outside Q1 and Q2 — Penn (108) at home — they’re in a good spot. Even with a loss to Memphis (53) in the quarterfinals of the AAC tournament, that’s only going to add another Q1 loss to their resume. It’ll be a sweat if a couple more teams go all Saint Mary’s on the bubble, but I’m starting to believe in the four-bid AAC.

UCF (NET: 28, SOS: 39): I’ve seen UCF on some bubble watch lists so I felt obligated to list them here, but for my money they are a lock after their win at Houston and against Cincinnati last week. They’re all the way up to a No. 8 seed in Dave Ommen’s latest bracket projection.

Not all that much, frankly. There are a couple of coaches in the league that are in a bit of a difficult spot currently, but I don’t think that we will see too much turnover. I don’t think that Houston is going to be able to climb much higher than a No. 3 seed in the NCAA tournament. I will say this, however: The AAC sure does look like it is going to be a four-bid conference, and if Memphis can find a way to get this automatic bid, they’ll get five. So much for all that talk about how the AAC is staring at being a one-bid league this season.

Now think about what happens when Memphis, UConn and Wichita State are all firing at the levels we’ve come to expect.

I’ll ride with the Tigers. I think Penny finds a way to get it done as Jeremiah Martin becomes a conference tournament legend for the performance he puts together this week.