Nowell is the best player on the best team in the conference. He leads the Huskies in scoring (16.3 ppg) and assists (3.1 apg) and is the first player since Brandon Roy to with the league’s Player of the Year award, and perhaps the most telling part of this is that Nowell ended out his teammate Matisse Thybulle for the award. Both, frankly, have been terrific, but where Nowell is the guys that ignites Washington’s scoring, Thybulle is their best defensive weapon and the biggest reason their zone is so effective.

Hop has done a good job with Washington this year, one that does not look as good at the end of the season as it did two weeks ago. That’s when they lost at Cal, the worst team in the Pac-12, and before they lost at home to Oregon in the season finale. But here’s the thing — they had already clinched the Pac-12 regular season title before those games tipped off. In a year where the conference was a dumpster fire, Washington was a beacon of consistency. That’s enough to get you a Coach of the Year award. 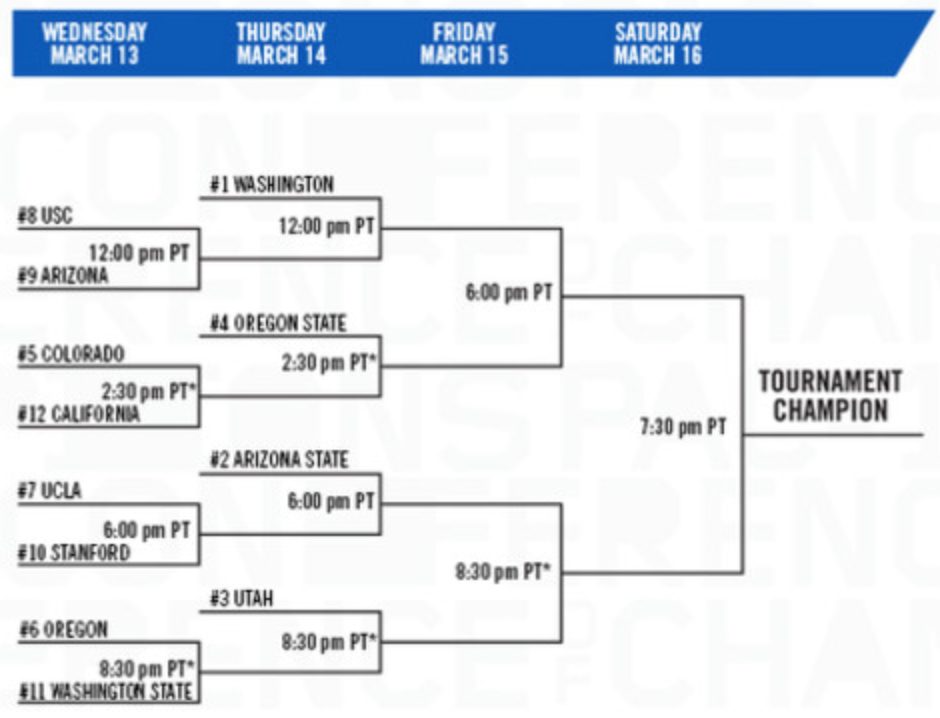 (All odds are courtesy of DraftKings SportsBook)

In-so-much as there is a favorite in this conference, it is the Huskies. They won the league by two full games and that’s despite going 2-2 in the final four. They have the best player in the conference in Jaylen Nowell, the best defender in Matisse Thybulle and arguably the best low post scorer in Noah Dickerson. Their zone flusters teams, and in a year where nothing in the league makes sense, Washington had wrapped up the conference regular season title by February 28th.

In a conference where nothing makes any sense, Washington makes … some?

The books are agreeing with me here, as Oregon is the No. 6 seed yet they have the same odds to win the Pac-12 tournament as ARIZONA STATE (+400), the No. 2 seed. What makes the Ducks interesting is that they are the best defensive team in the conference this side of Washington, they have a point guard in Payton Pritchard that has played in a Final Four and they are slotted in the bracket where a second round game would come against UTAH (+750), who they beat on the road. They’ve also won four straight heading into March, with two of those wins coming against Arizona State and at Washington. This team is hot.

Honestly, I think that Washington is probably the best value here. There isn’t another conference in the country where you can bet on the conference champion and the favorite to cut down the nets and get 3:1 on it. I probably would not bet on the Ducks, seeing as they have to win four games in four days and are getting paid off at the same price as Arizona State to win three games in three days. I would not bet Arizona State either, for that matter.

The team that actually interests me is Colorado. They have won eight of their last ten games this season, and their 1-2 punch of McKinley Wright and Tyler Bey is as dangerous as anyone in the league. They would get Oregon State in the quarters and Washington in the semis, which isn’t ideal, but that’s baked into the odds.

ARIZONA STATE (NET: 67, SOS: 71): So here’s the thing about Arizona State — they have three good wins that don’t look as good as they did three months ago thanks to Kansas (20) coming back to earth. They have 11 Q1 and Q2 wins and an 11-5 mark in those games, but they also have two Q3 losses and two hideous Q4 losses. They have some room to work with right now, but if they lose to either UCLA (118) or Stanford (106), that would be a fifth loss against a Q3 or Q4 team. If a few other teams on the bubble make a run and a few Bid Thieves strike, things could turn on Bobby Hurley. My guess: They’re back in the play-in game.

If Arizona State loses in the first round of the tournament, there is a very real chance that this could end up being a one-bid league.

I’m going to stick with my guy and say that Oregon beats Washington for the second straight time to give the Pac-12 their second bid to the tournament.