Either way, the point isn’t to argue about this. The point is that Hunter has been absolutely phenomenal this season. I think there’s an argument to be made that he is the best defender in college basketball given the way he can switch from defending the best guards to the best bigs and back, often in the same game. He’s also the most talented player on Virginia and the guy that has been the one to takeover in games when Virginia is struggling.

His numbers aren’t eye-popping, which is a direct result of the pace Virginia plays and the fact that they have three stars, but he is easily the first ACC player not named Zion Williamson that I could pick if I was starting a college basketball team.

Coming off of a season in which the Wahoos not only lost in the first round of the NCAA tournament — the only time that has happened to a No. 1 seed, I don’t know if you heard about that — and then graduated their second-leading scorer and best frontcourt defender, Virginia entered the 2018-19 season picked to finish third in a conference that had more than half of their members in the preseason top 25. By the time the dust settled, Virginia finished the season sitting at 28-2 overall and with a share of the ACC regular season title for the fourth time in the last six seasons. Their only two losses this season came against Duke. 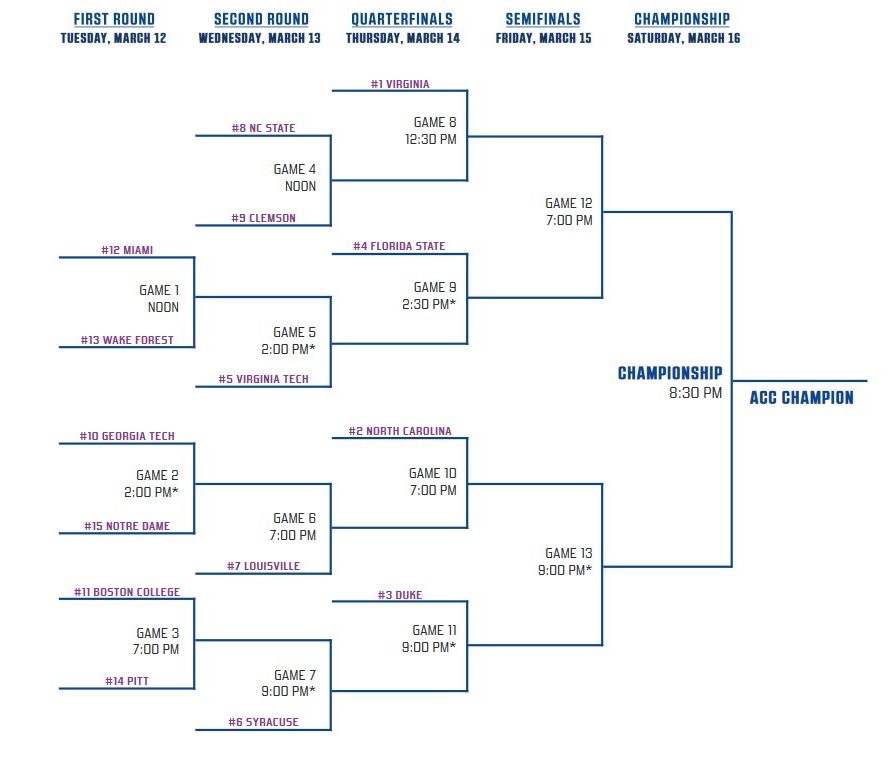 Virginia (+150) is the odds-on favorite to win the ACC tournament, but I think that line has a lot to do with the fact that the Wahoos are the No. 1 seed, meaning they will avoid Duke and North Carolina until the title game. It’s hardly a bad bet — Virginia is the reigning ACC tournament champ, they have won two ACC tournaments in the last five years and this is one of the three best teams in college basketball — but I still think Duke is the best team in the conference. They have lost just once this season when they have been at full strength (against Gonzaga) and they swept Virginia despite playing without Tre Jones for a game.

The bigger news is that it appears that Zion Williamson will be back for the ACC tournament. Duke head coach Mike Krzyzewski told reporters after Saturday’s loss at North Carolina that he expects the big fella to play. For what it’s worth, I like the value that comes with Virginia more than Duke or North Carolina (+200) simply because the Tobacco Road Rivals are on a crash course in the semifinals.

I think we have to look at the top of the bracket here to avoid a situation where we’re picking a team to be Duke, North Carolina and Virginia on three straight nights. Florida State is the No. 4 seed, meaning that they, too, get the double-bye into quarterfinals where they seemed like to end up playing a Virginia Tech team they beat in overtime in Tallahassee just six days ago. The Seminoles have also won 12 of their last 13 games since starting ACC play 1-4.

That said, there are some books that have the Hokies getting better odds than Florida State, and in that situation I think that they are worth a look as well. Virginia Tech actually matches up better with Virginia than Florida State does. Virginia does not turn the ball over, they do not get sped up and they are not going to give up points in the paint, either via penetration or second chance points. Florida State probably has more talent that VT with Justin Robinson expected to miss the tournament, but Virginia Tech can really, really shoot the ball and Nickeil Alexander-Walker and Kerry Blackshear work well ball-screen actions together.

If you can get 20:1 odds on Florida State it’s certainly a better bet because they have to win just three games instead of four, but otherwise I do like the Hokies more.

CLEMSON (NET: 35, SOS: 32)
N.C. STATE (NET: 32, SOS: 211): Right off the bat, we get what probably will amount to a play-out game, as the 8-9 game in the ACC tournament will feature bubbly Clemson vs. bubbly N.C. State. As far as I’m concerned, but programs need to not only win on Wednesday but then go on to beat No. 1 seed Virginia on Thursday afternoon to deserve an at-large bid. We detailed why Clemson should not be considered to be on or near the bubble right now, while N.C. State played the worst non-conference schedule in all of Division I basketball this season.

SYRACUSE (NET: 46, SOS: 12): I think the Orange are probably safe regardless of what happens on Wednesday, but if they end getting blown out by No. 14 seed Pitt after losing their last two, four of their last five and seven of their last ten regular season games, then there is a chance that they could drop below the cut-line if college basketball’s Bid Thieves go bonkers this week.

Virginia has more or less locked up a spot on the No. 1 seed line at this point, but there is still a possibility that, should they lose to the Clemson-N.C. State winner, they can be bumped off the top line or out of the East Region and Washington D.C. Duke and North Carolina, on the other hand, are still playing for a shot at the ACC’s second No. 1 seed. Should Duke beat Virginia in the ACC tournament title game, there’s a world where all three of Duke, UNC and UVA get No. 1 seeds.

On the job front, it seems like this will likely be the end of the forgettable Danny Manning era at Wake Forest. The other ACC job that could open this spring — beyond, you know, the obvious Buzz Williams to Texas A&M rumors — is Boston College, where Jim Christian missed on his chance to make the tournament with Ky Bowman and Jerome Robinson last season. As the No. 11 seed this year, an automatic bid to this tournament this year seems exceedingly unlikely.

Zion Williamson returns and Duke reminds everyone who the true king is in college basketball this season, beating Syracuse, North Carolina and Virginia en route to the ACC tournament title.