The insanity that was Tuesday night in the state of Kentucky was a perfect encapsulation of why the NCAA rulebook can be ridiculous at times.

It started with No. 5 Kentucky losing at home to No. 19 LSU in a game that ended in controversy. With the score tied on the final possession of the game, LSU took the ball the length of the court, Skylar Mays missed a runner that would have won the game, but Kavell Bigby-Williams was there for a tip-in at the buzzer.

That tip in clearly was basket interference. It wasn’t even close:

The officials went to the monitor to review whether or not the tip came before the buzzer, and while reviewing the play, they no doubt saw that the call was objectively wrong: 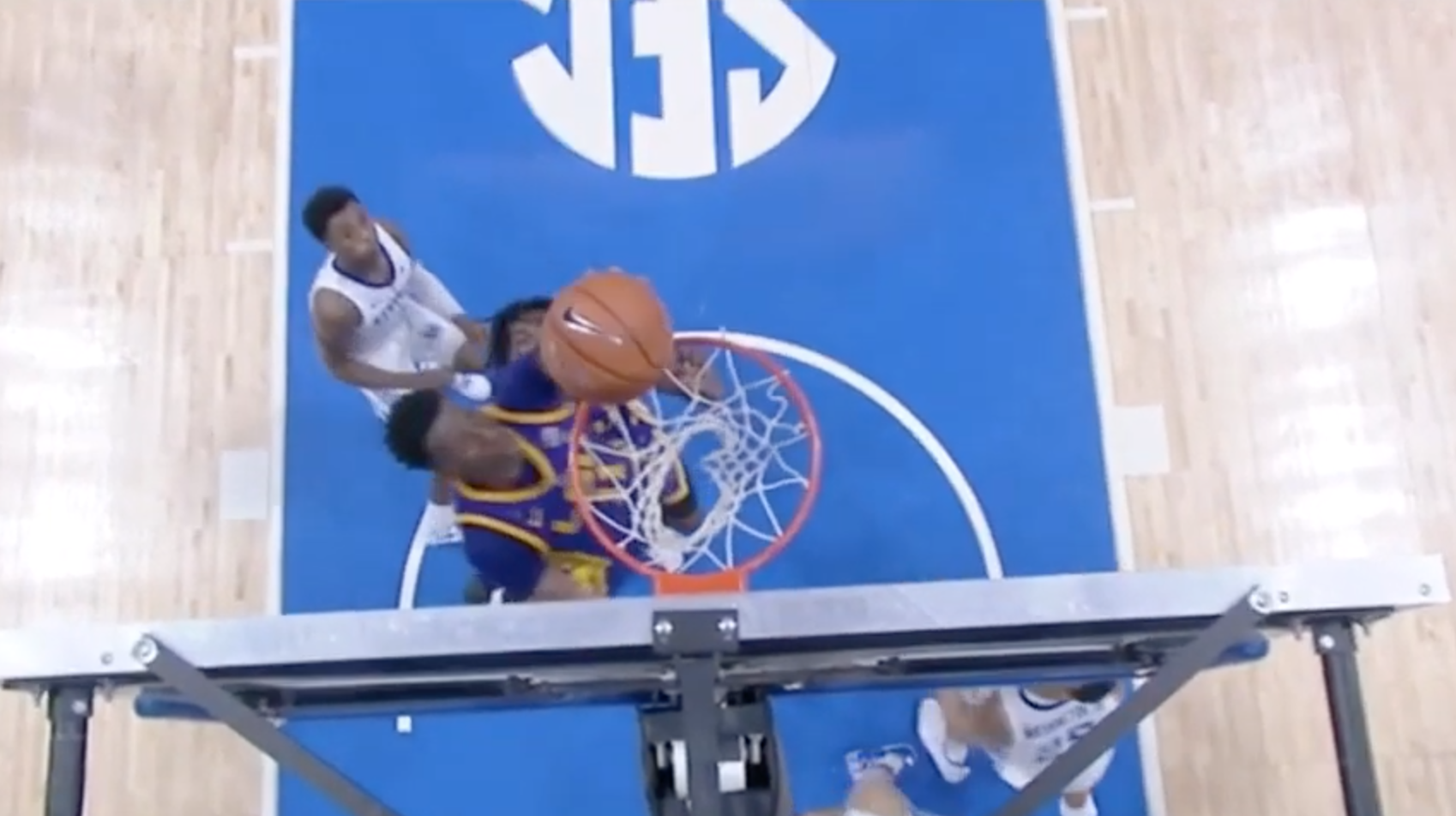 As you can see, the ball is still clearly in the cylinder when Bigby-Williams touched it, but since the rules state that basket interference is not a reviewable play, the bucket counted.

Instead of going into overtime, LSU wins and Kentucky loses, all because a call that can definitively be determined on review is not allowed to be reviewed.

Just two hours later, No. 2 Duke found a way to win on a similar technicality. With less than 20 seconds left on the clock, Cam Reddish drives the lane, is out of control and goes barreling into Ryan McMahon. It’s the easiest charge call that official has ever had to make, proof being that Mike Krzyzewski didn’t even bother to argue whether or not the official made the right call:

What Coach K argued, and correctly so, is that McMahon’s left heel was in the charge circle.

The officials went to the monitor, reviewed the call, saw this picture and overturned the ruling: 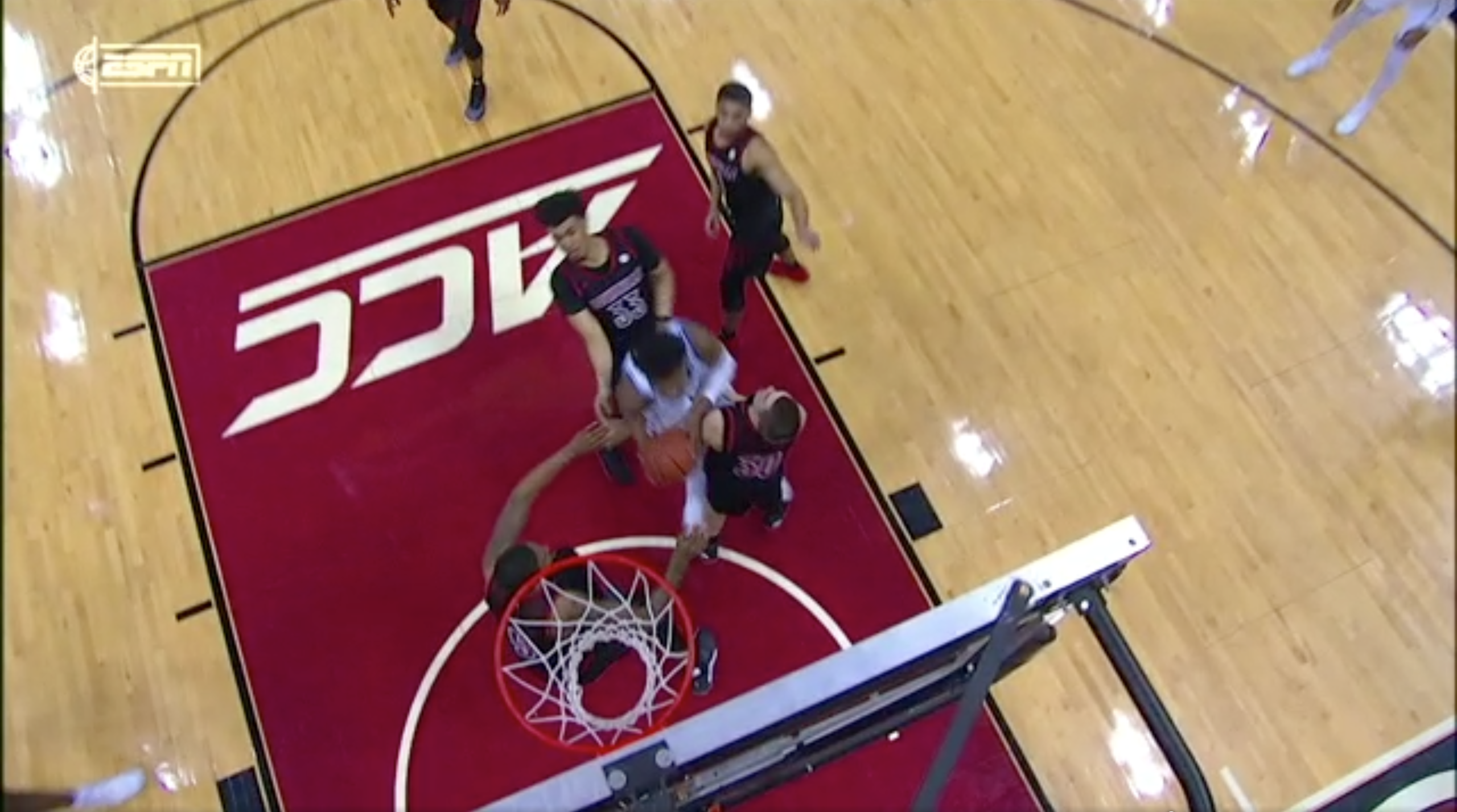 Reddish made both of his free throws, Louisville couldn’t find a way to get a good look at the rim at the other end and the result was the biggest second half comeback in Coach K’s career.

That’s just a brutal way for Louisville to lose a game, but the right call was made. McMahon is very clearly in the restricted area. The officials went to the monitor and made the correct call. But at the same time, this is a ridiculous way for Kentucky to lose.

What is the difference between what we can see on replay in the Kentucky-LSU game and the Duke-Louisville game?

Truth be told, there is no difference, and the way that these events played out last night should change the way that the end of college basketball games work. There’s absolutely no reason to have the ability to go back, look at the monitor, see that the call that was made was clearly incorrect and then not be allowed to change the call.

I would be hesitant to say that referees should be able to review any call in the final minute because it becomes a slippery slope. Are we going to review every foul call in the final minute, too? If everything is reviewable, as some people have suggested, are we going to go to the monitor because a coach is trying to get a basket waived off by arguing that a screen that was set earlier in the possession was, by the letter of the law, an illegal screen?

Yeah, we need to get this one right.

And it wouldn’t be the first time that a bad call going against Kentucky has resulted in a rule change. We can now review whether or not a shot beat the shot block in large part due to this basket that was scored by Wisconsin’s Nigel Hayes in the 2015 Final Four, a call that helped cost Coach Cal an undefeated season.