There is plenty to talk about when it comes to the play that Mike Krzyzewski drew up to get Cam Reddish wide-open for a game-winning three on Saturday afternoon.

Like, for example, why Leonard Hamilton thought it prudent to keep playing a defense (zone?) that Duke had repeatedly created open shots against on out-of-bounds plays underneath the basket.

But we’ll get to that.

Let’s start by setting the scene. There are 2.8 seconds left on the clock. Duke has the ball under the basket. The score is 78-76 and, after what feels like an hour long delay as the officials reviewed the time and whether or not Duke got the ball back and both the Coach K and Hamilton called a timeout, Duke finally had their chance to tie or win the game.

He finds himself wide-open from the right wing.

How Reddish found himself wide-open is a much longer story that begins with a very simple concept: Force three Seminoles to guard two Blue Devils in the paint. That’s exactly what happened on the final play of the game. Duke comes out with Marques Bolden on the block on the same side of the lane as the in-bounder with three players spread across the free throw line: 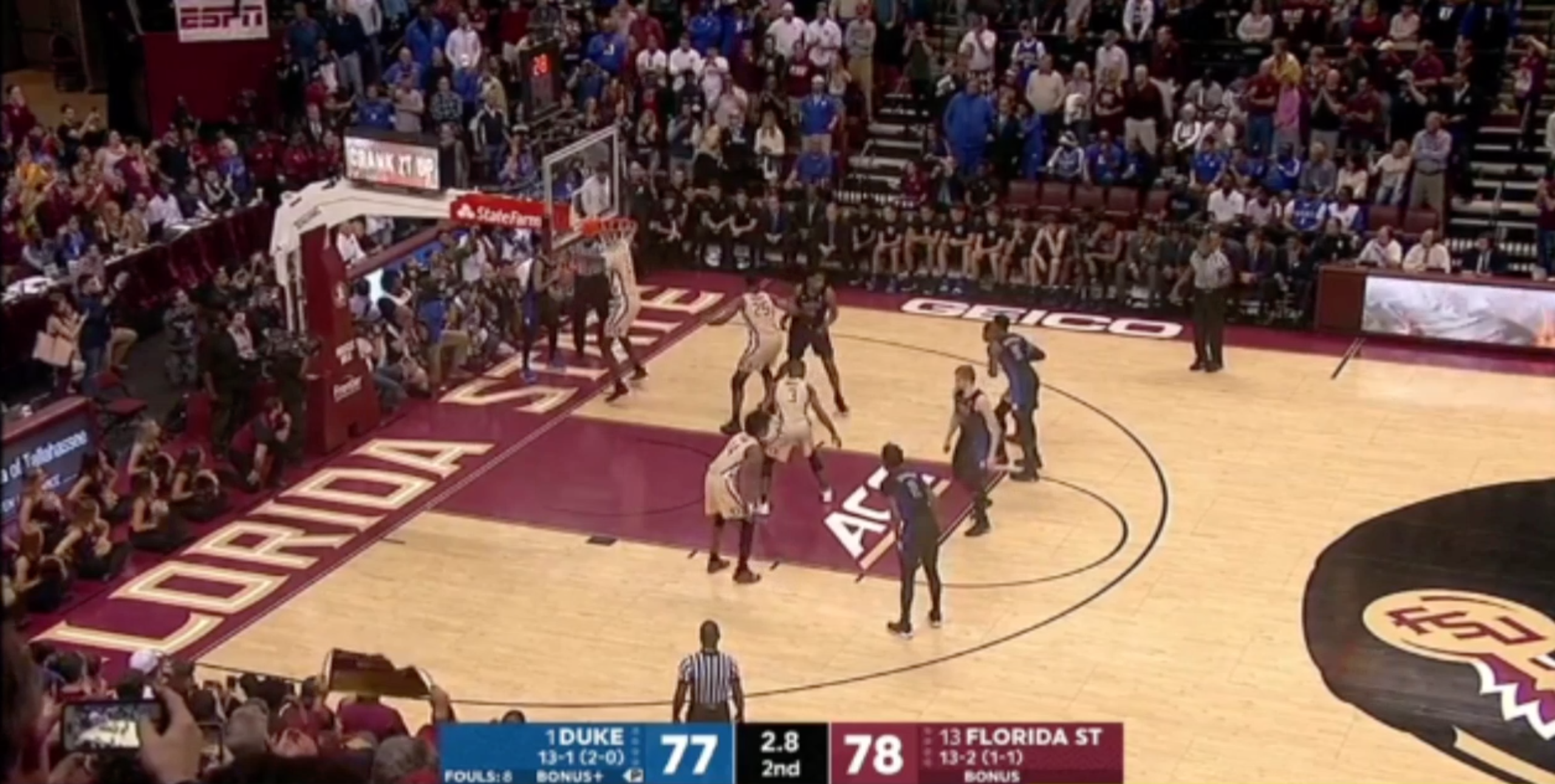 Bolden goes and sets a screen for R.J. Barrett, who leaves to the corner and occupies M.J. Walker. After setting the screen, Bolden dives to the rim, a cut that Mfiondu Kabengele is forced to defend. But the trick here is that Bolden is not actually looking for the ball — he’s seeking out Trent Forrest, who has the responsibility of tracking the shooter on the perimeter.

As Bolden does that, Jack White sets a screen on Terance Mann, burying Florida State’s other two perimeter players in the paint: 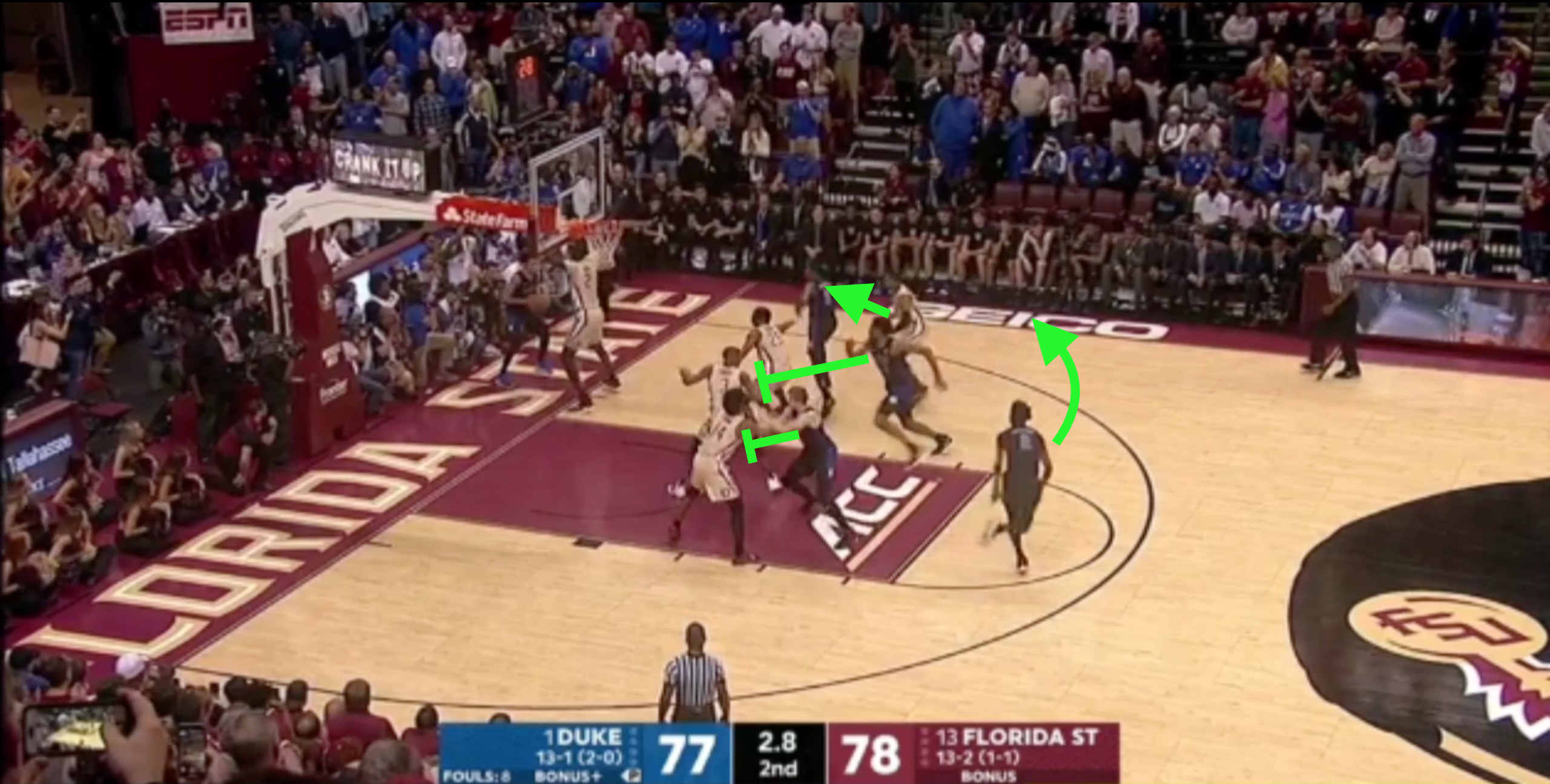 Christ Koumadje is defending the inbounder. Walker has to track Barrett to the corner. Kabengele is tracking the cut that Bolden makes to the rim while Bolden and White seal off two Florida State defenders. That leaves three guarding two in the paint and no one to run Reddish off of the three-point line.

Here is the play in its entirety:

It is a brilliantly designed play against that Florida State zone, and one that Duke ran out of different alignments two different times earlier in the game.

Midway through the first half, Duke got the exact same shot for Reddish running a different action with the same concept. Once again, the Blue Devils lined up with three across the foul line, but this time, Barrett was already in the strong side corner, occupying a defender. Reddish was the furthest away from the inbounder: 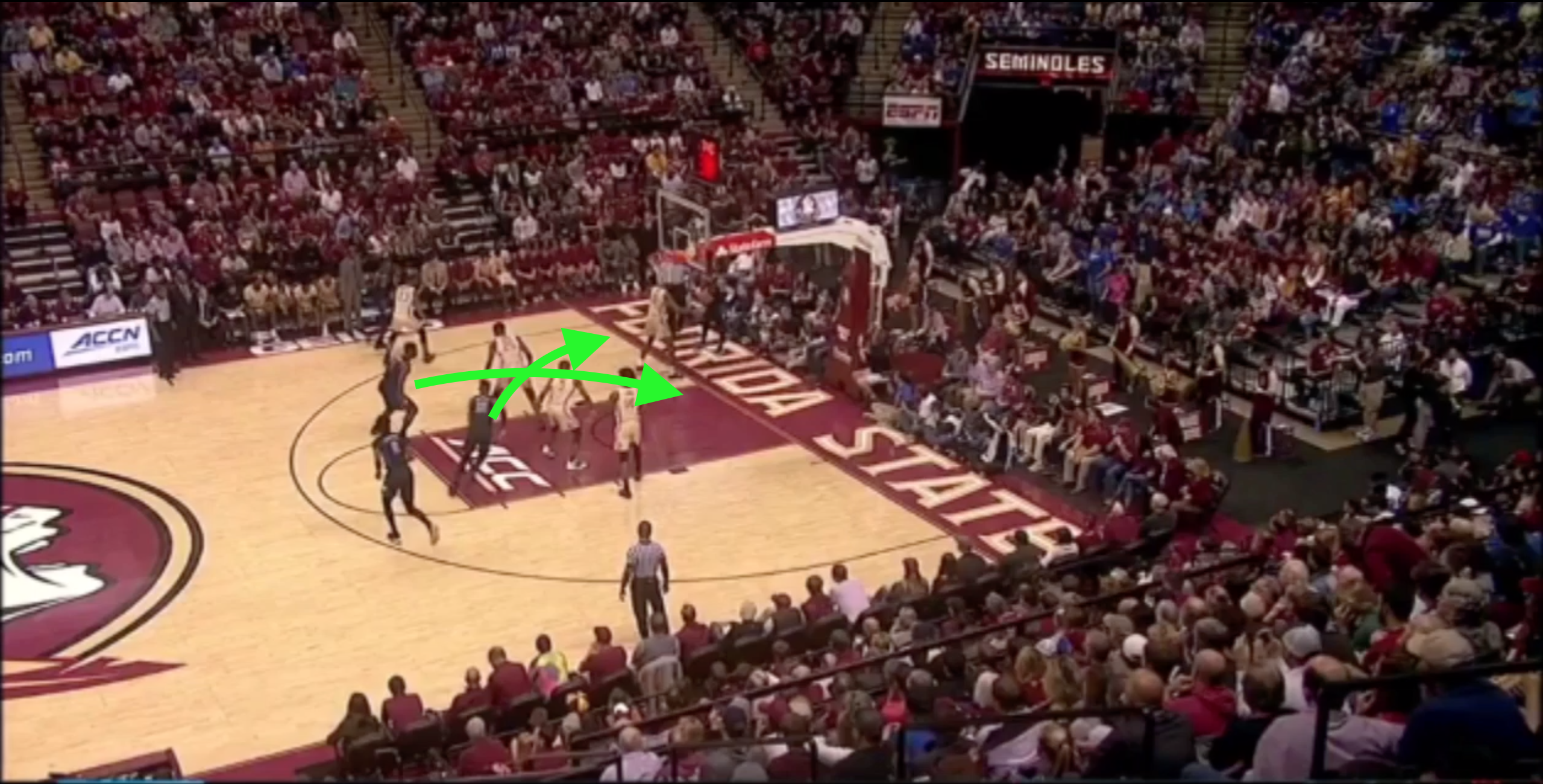 Javin DeLaurier was in the middle, and he cuts to the ball as Zion Williamson cuts right behind him in order to bury Forrest — and, as luck would have it, Mann — in the lane. Since Walker cannot leave Barrett in the corner, Reddish has a wide-open look at a three. Ironically enough, he bricked this one: 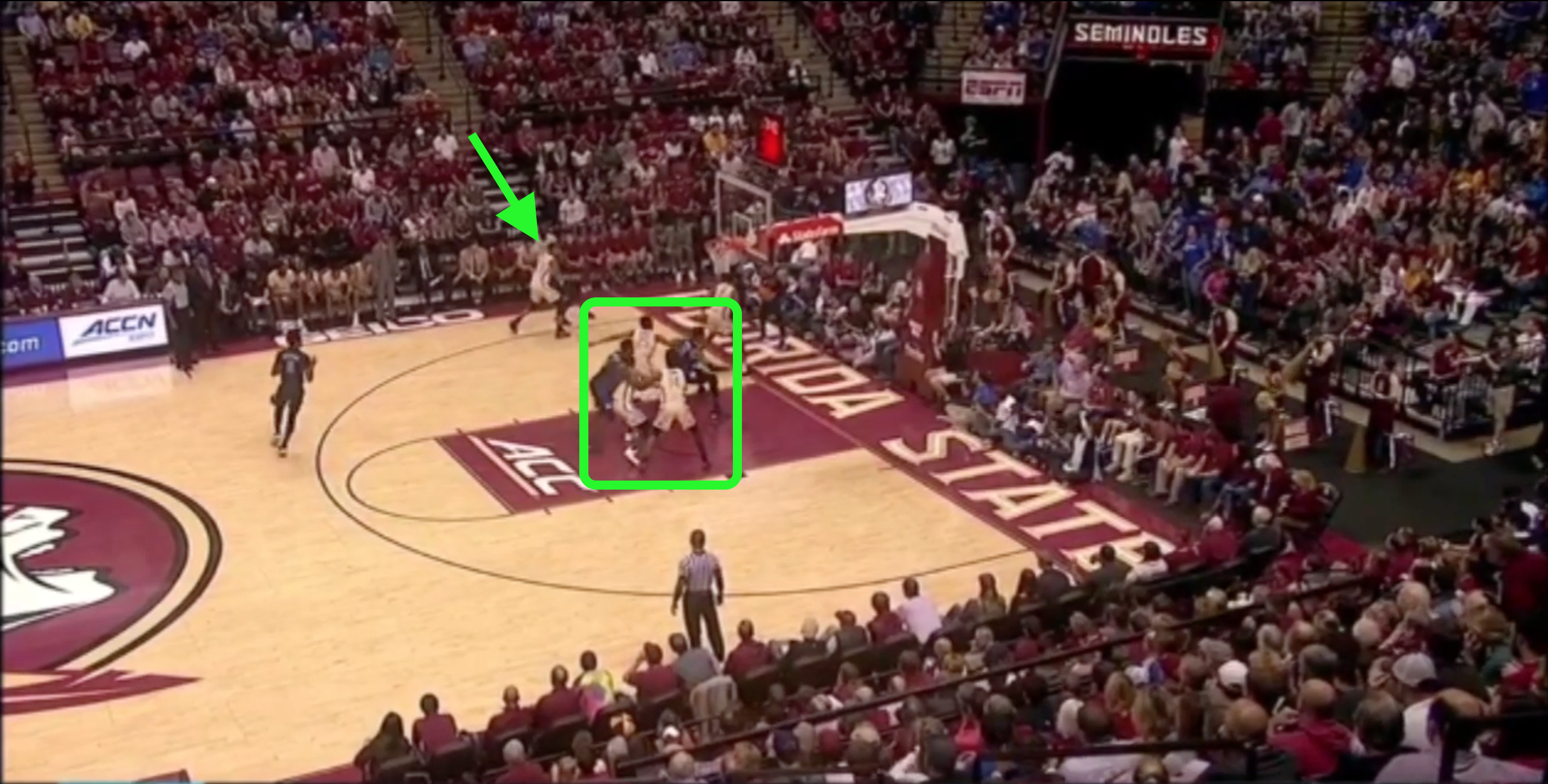 In the first minute of the game, Duke ran something very similar out of an entirely differently alignment. This is the play where Coach K figures out the tweak that will get Reddish so wide-open.

Here, you’ll see Zion, Barrett and Reddish in a line across the lane at the block: 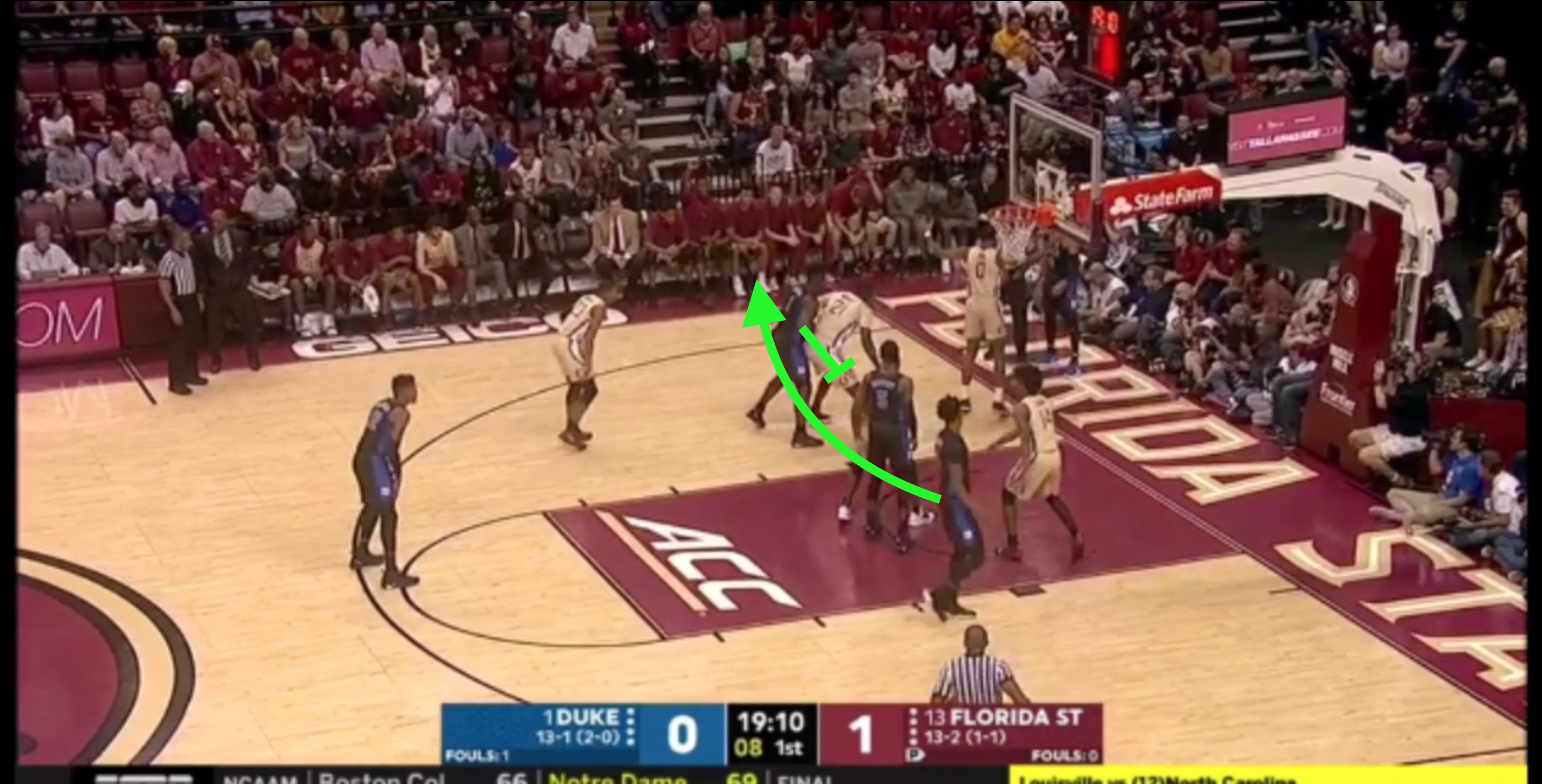 Zion screens in for Reddish, who sprints to the corner as DeLaurier dives to the basket and Barrett floats out to the perimeter. DeLaurier does not put a body on Forrest and it would have led to a steal, but the inbounds pass is tipped and it ends up in Barrett’s hands. He is gets a wide-open look at an 18-footer that he bangs home: 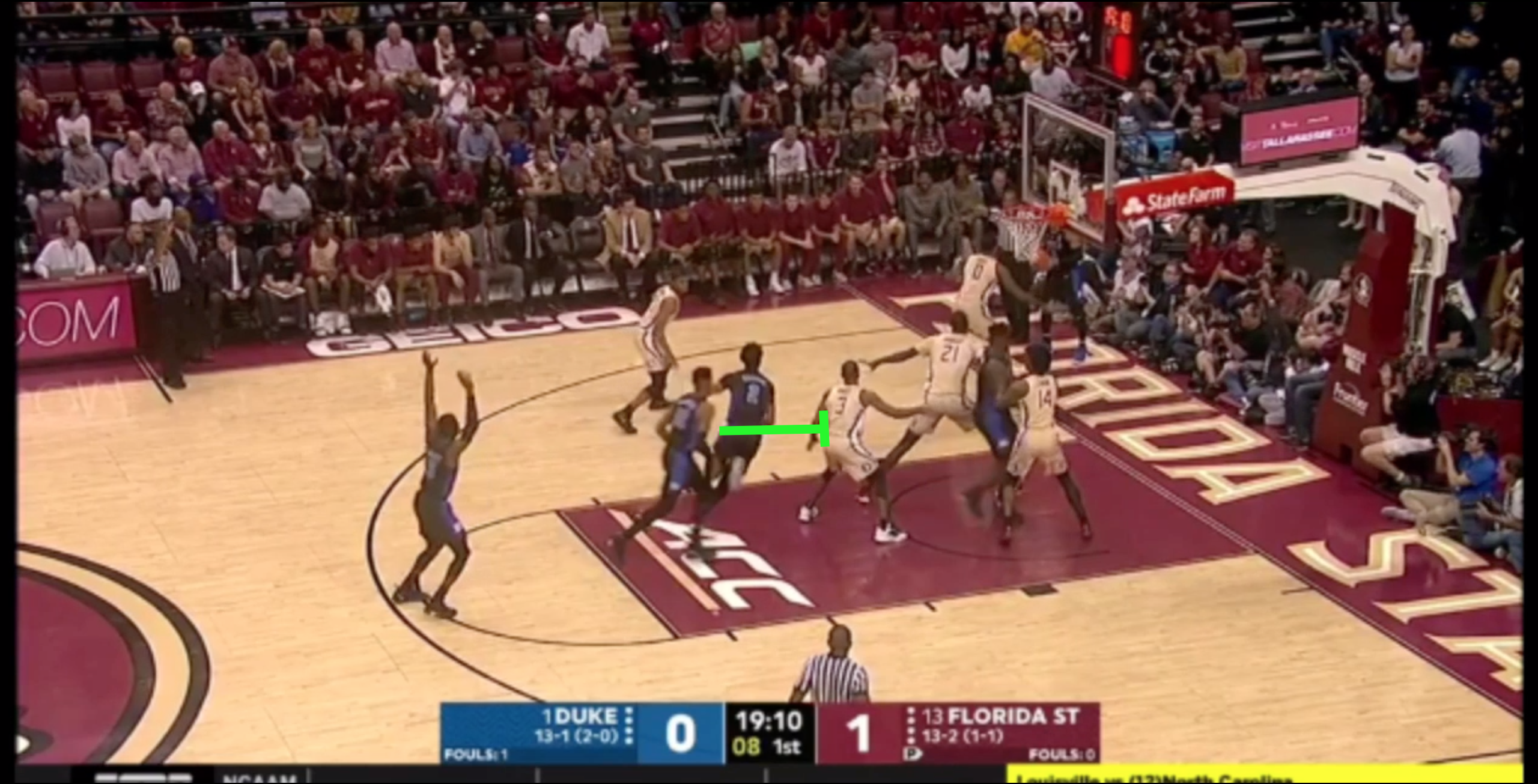 Here is a full look at both of those plays:

These are well-designed and well-disguised plays, all that are essentially accomplishing the same thing with the same action but with different looks. On Saturday, it earned Duke a win in a game where the best player in college basketball did not play in the second half.

I guess there’s a reason Coach K is in the Hall of Fame.