After losing to Penn on Tuesday night, snapping a streak of 25 consecutive wins against Big 5 opponents, Villanova — winners of two of the last three national titles — fell to 8-3 on the season with a trip to Phog Allen Fieldhouse coming up on Saturday.

Penn was the second mid-major opponent that Villanova has lost to this season. They fell at home against Furman in overtime. That came just days after they were absolutely humiliated by Michigan in a national title game rematch as they unveiled the newly-renovated Finneran Pavilion.

And while there is plenty to discuss about how and why the Wildcats are now in the midst of what could end up being their worst season since missing the 2012 NCAA tournament, the major talking point for this team has become Jahvon Quinerly. Through the first month of the season, the No. 29 prospect in the Class of 2018 has been easily the most ineffective freshman ranked in the top 30 of the class that is healthy and in school. Ranked between potential lottery picks Kevin Porter Jr. and Luguentz Dort, according to 247 Sports, Quinerly has taken three DNP-CDs through 11 games. The only reason he’s in the box score as logging one minutes in the loss to Penn is because Collin Gillespie fouled out with six seconds left; Quinerly didn’t even play the entirety of the last six seconds. He played two minutes against La Salle. He played three minutes against Oklahoma State. He hasn’t played more than eight minutes in a game that didn’t come against totally overmatched competition.

As you can imagine, it’s been frustrating.

After the loss to Penn, Quinerly hopped on Instagram and posted on his story a black screen with white lettering that read “Was my 2nd choice for a reason;” if you recall, he was initially committed to Arizona before the FBI investigation into corruption in college hoops uncovered information that former Arizona assistant Book Richardson may have funneled as much as $20,000 to Quinerly’s family. Quinerly quickly deleted the post before attempting to make it seem as if his account had been hacked. A friend of his from New Jersey, LSU freshman Naz Reid, even tweeted that Quinerly had been hacked.

Turns out, to the surprise of absolutely no one, Quinerly was not hacked. He just was frustrated about the way the start of his Villanova career has gone and said something on social media that he shouldn’t have said. Villanova head coach Jay Wright said that this was just “the normal frustration of a young kid that’s used to playing a lot, and not playing” and that Quinerly had already apologized to the team. He issued a statement on Thursday on his twitter account apologizing as well.

The story of a frustrated freshman popping off on Instagram isn’t all that interesting to me. Neither is the speculation that this could lead to Quinerly transferring out of the program; I don’t see it happening during the season, and if it happens in the offseason we can talk about it then and there.

What’s more interesting to me is the why: Why has Quinerly been limited to 69 minutes on the season? Why hasn’t he earned Jay Wright’s trust? Why has Wright opted to go with Gillespie who, as one scout put it to me earlier this year, is “playing above his level”?

It starts with the defensive side of the ball.

What Villanova wants to do defensively is not easy for freshmen to pick up. They’re not strictly a man-to-man team, but when they play man, they rarely do it without a lot of switching. They’ll mix in some zone and some 1-2-2 pressure as well, and that often results in players being forced into guarding mismatches.

I cannot speak to what happens in practice. The word coming out of the program is that Quinerly “worked hard” and “continues to work” and is “a great teammate”, which is exactly what you would expect to hear a head coach say about his five-star freshman.

I can, however, see what happens when Quinerly is on the floor during games. I watched every minute that he has played this season, and this is what I am seeing.

The biggest reason that Quinerly has been forced to the bench is that he has had some real issues defensively.

He’s not identifying who he is supposed to be guarding in transition. He’s falling asleep when he is supposed to be boxing out. He simply isn’t strong or good enough as an individual defender to handle the assignments he’s been given — in the last clip you see him getting easily beaten off the dribble. To his credit, it doesn’t appear to be an effort issue as much as a ‘he’s not quite ready’ issue.

The biggest cause for alarm here is the third clip below.

This isn’t a complicated action that Michigan is running, as Zavier Simpson cuts between Jordan Poole and Isaiah Livers right before Livers sets a ball-screen for Poole: 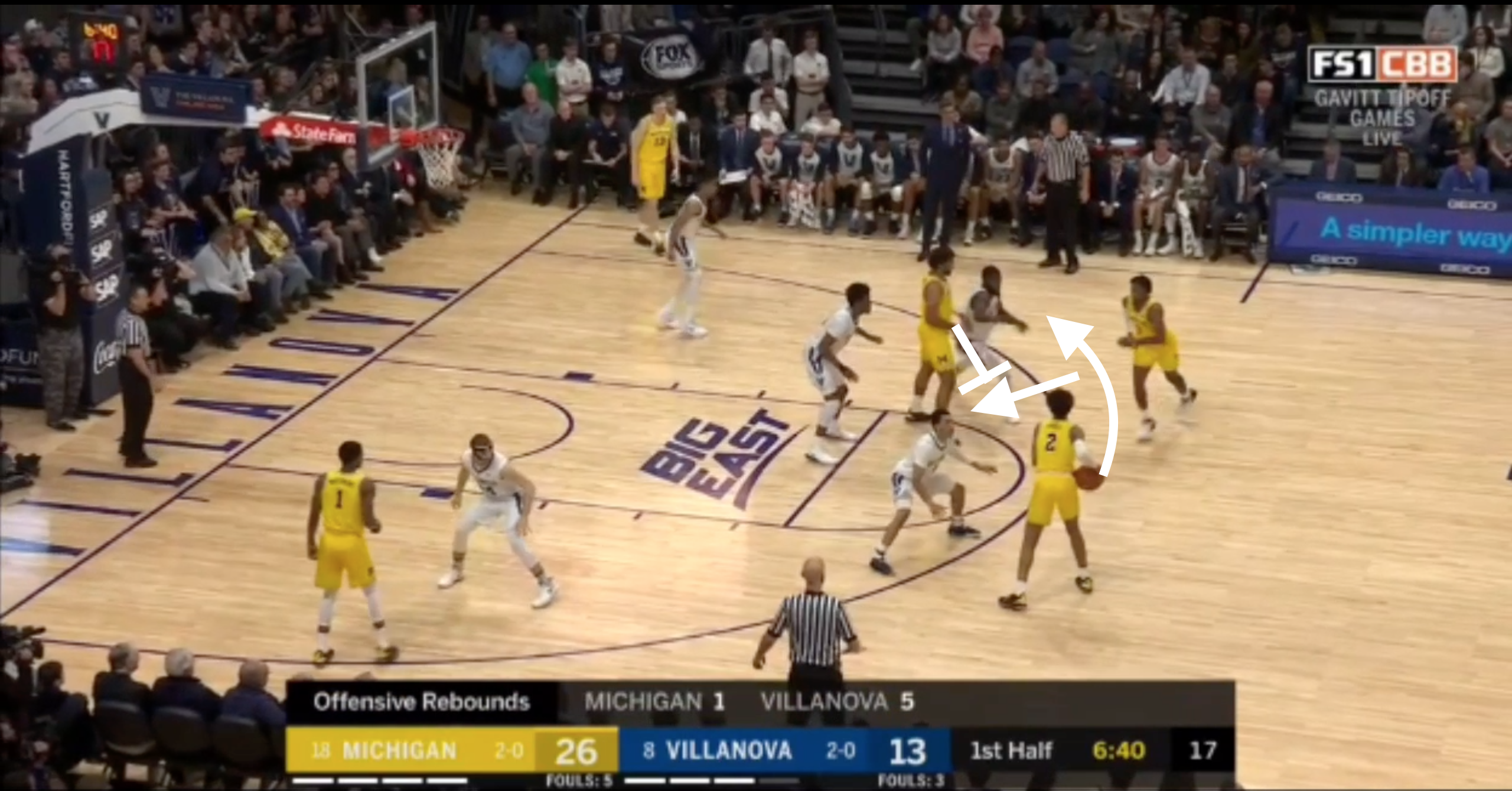 When Livers sets the screen, Quinerly should switch onto the bigger defender as Saddiq Bey, another freshman, switches onto Poole. But Quinerly gets confused and goes to guard Simpson, leaving Livers a free run to the rim: 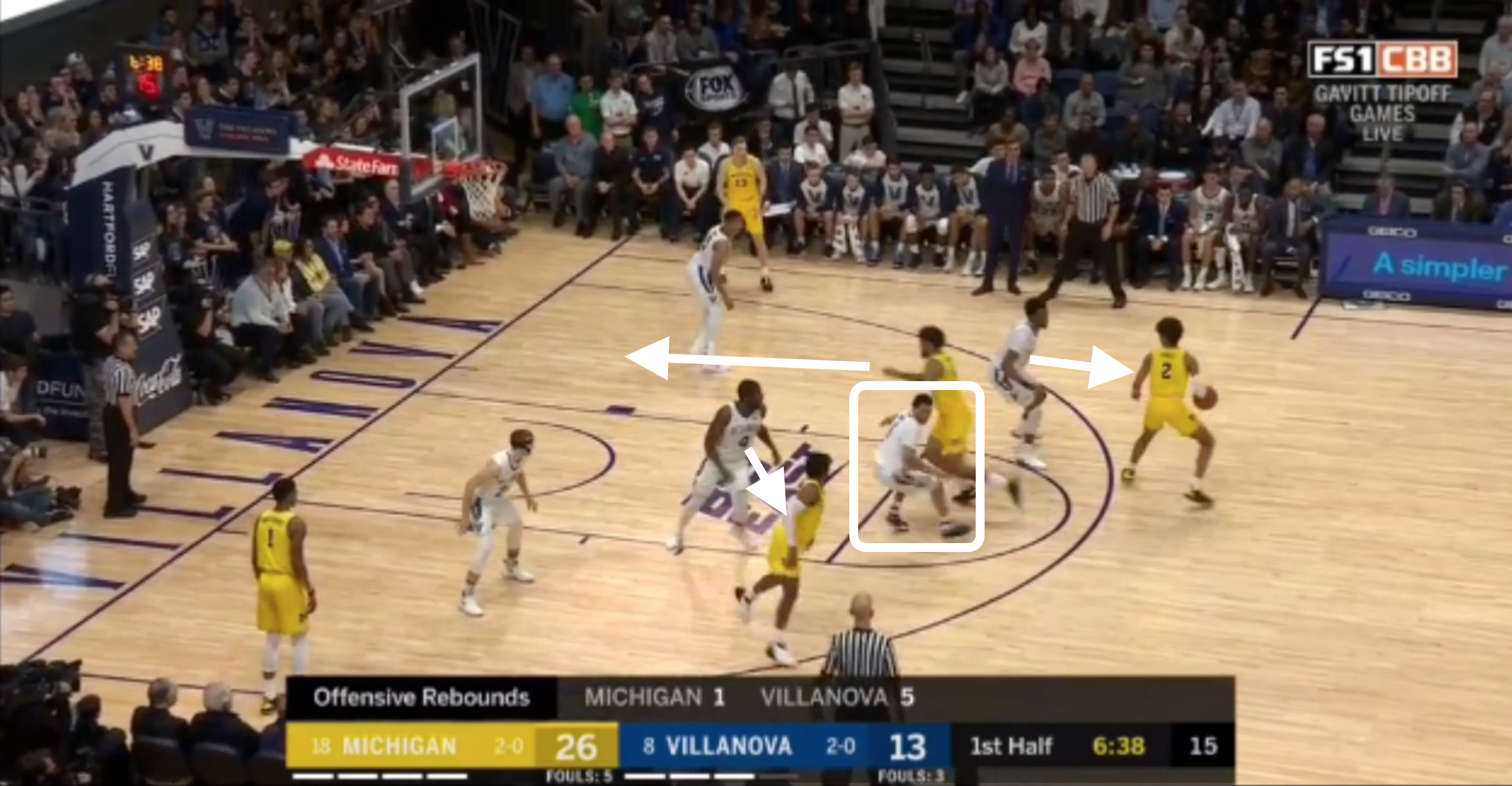 Joe Cremo is forced to rotate over to help, and actually forces a miss at the rim, but Quinerly falls asleep, doesn’t box out Charles Matthews and watches as the Michigan star throws down a monster dunk: 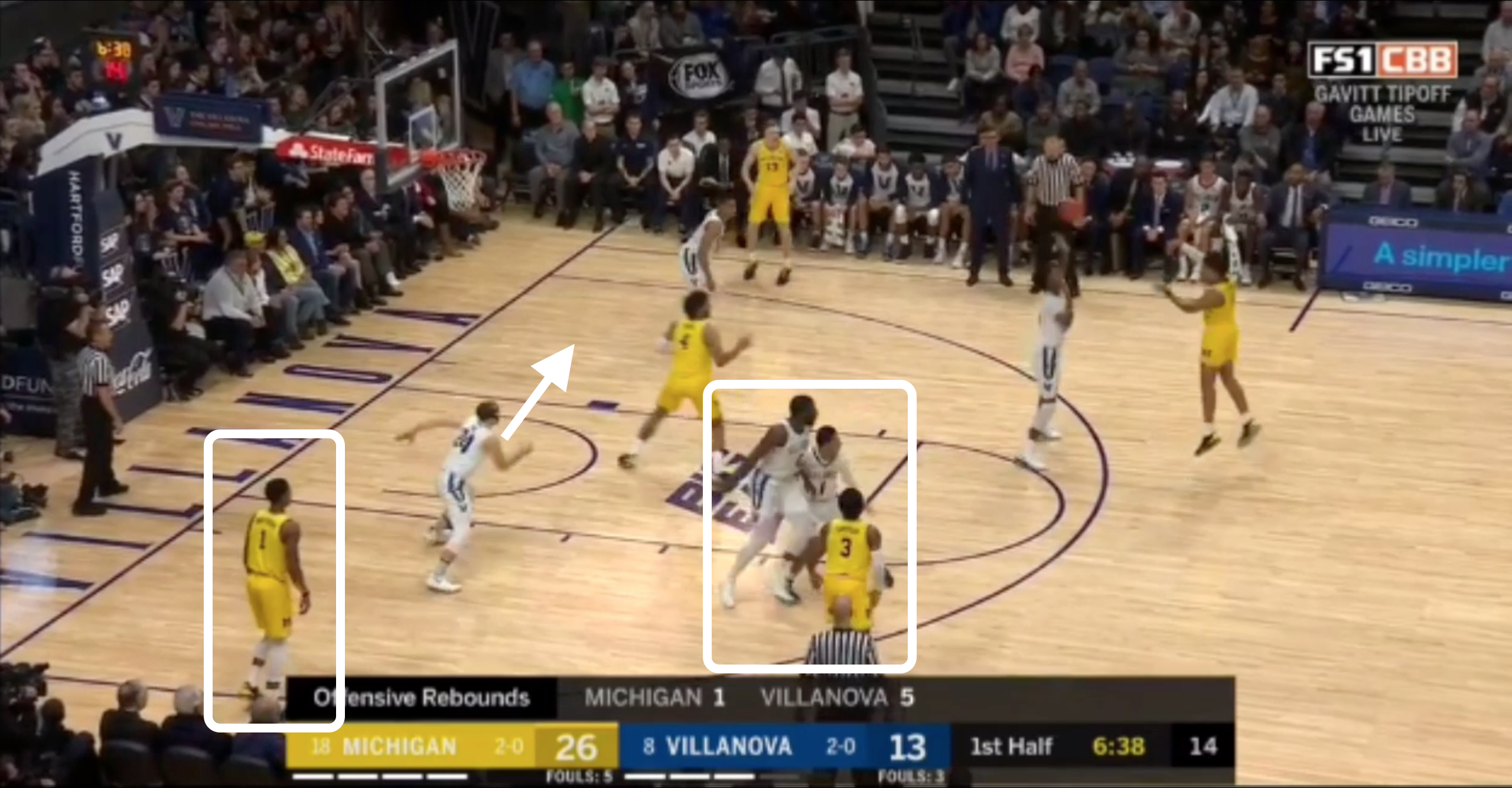 You can see the entire play below:

Quinerly was never going to come into the program and be the best on-ball defender on the roster. We knew that. The problem is simply that he has not been good enough offensively to justify putting him on the floor when he’s a defensive liability. Trae Young couldn’t guard a mailbox last season, but Oklahoma had to have him on the floor because of how good he made them offensively. Ashton Hagans has been a mess offensively through the first month of the season, but Kentucky has been giving him Quade Green’s minutes because he is just so good on the defensive side of the ball.

He has all of these issues defensively, and on the season he is averaging just 2.4 points with eight assists to 11 turnovers while shooting 26.9 percent from the floor and 17.6 percent from three. Yes, some of that is a result of the fact that he’s been strapped to the bench and unable to develop any kind of rhythm or confidence. I get that. But he also hasn’t quite learned, or bought into, the principles and concepts that Jay Wright drills his players on.

I’ve written long and detailed stories on Villanova’s offense twice in the last year, but the tl;dr version is this: Villanova doesn’t run plays, they teach concepts and reads and develop the kids in their program as basketball players that can function in any environment more than turning them into robots that run set after set after set. It’s takes every freshman time to learn these things. There’s a reason that Villanova has so many redshirts.

Here’s an example: One of the core principles of Villanova’s offense is the jump-stop. It sounds simple, but it’s true. Wright wants his guys to get into the paint, come to a jump-stop and then see what opens up. Maybe they’ll have a layup. Maybe they’ll have room to get a floater off. Maybe they pivot a couple of times before finding an open shooter. Maybe those pivots will create enough space for a turnaround jumper. Half Court Hoops put together an entire video package on this last year.

Quinerly, far too often, has his drives to the paint end like this:

I think Quinerly is going to be fine.

The talent is there. He was never going to be a one-and-done point guard — I’m not sure he is an NBA player, period — but he is good enough to be a really good guard at the college level. He’s also not the only freshman struggling to acclimate on this Villanova roster. Cole Swider, a top 40 recruit, is averaging less than 12 minutes. Brandon Slater, a top 75 prospect, has played just 26 minutes in six games.

But Quinerly is the five-star with all the hype.

He’s Jelly-Fam. He’s the one that Book Richardson tried to buy, according to the FBI.

That brings with it expectation, and when you fail to live up to that expectations, people talk, especially if your failure is spotlighted by a fake Instagram hack.

Quinerly is in a tough spot. You can’t hide a point guard offensively. When you make a mistake with the ball in your hands, everyone knows it. If Swider makes a mistake off the ball, no one outside of the coaching staff notices. And unlike Swider, Quinerly doesn’t have physical tools that can help make up for the times the ends up out of position defensively.

He’ll get there soon enough, but until he’s good enough offensively to make himself a net-positive, or until he figures out what he’s doing defensively, it’s going to be a struggle to take minutes from Gillispie, a veteran that Wright trusts.