Today we dive into No. 2 Kentucky.

Think about where we are with this Kentucky program for a second.

Coming off of an OK season that saw Kentucky struggle early, win 26 games, find a rhythm and, just when you thought the field had opened up for them to make a run to the Final Four, get dropped by No. 9-seed Kansas State in the Sweet 16.

They lost four members of last year’s freshman class in the offseason — Shai Gilgeous-Alexander, Kevin Knox, Hamidou Diallo and Jarred Vanderbilt. They lost Sacha Killeya-Jones to a transfer. Tai Wynyard turned pro. All told, two-thirds of the players in Kentucky’s rotation last season left, and the only three returnees will all be entering their sophomore season.

As always, Kentucky head coach John Calipari landed an absolutely loaded recruiting class, landing five five-star prospects as well as Stanford grad transfer Reid Travis, the latter of whom is viewed as the difference-maker with this group.

And not just because he averaged more than 19 points in the Pac-12 last season.

It’s because Kentucky is now looked at as an experienced group, at least by their standards.

Think about that for a second.

This Kentucky team has a nine-man rotation. Five of the nine are freshmen, and one of those freshmen was originally a member of the Class of 2019 and enrolled in school early. Three of the remaining four are sophomores, and the fifth — a redshirt senior — only arrived in Lexington after the 2018 NBA Draft had taken place. He’s been there for all of four months.

That’s where we are with this Kentucky team.

They are looked at as experienced.

Will that experience be enough to get them John Calipari’s second national title? 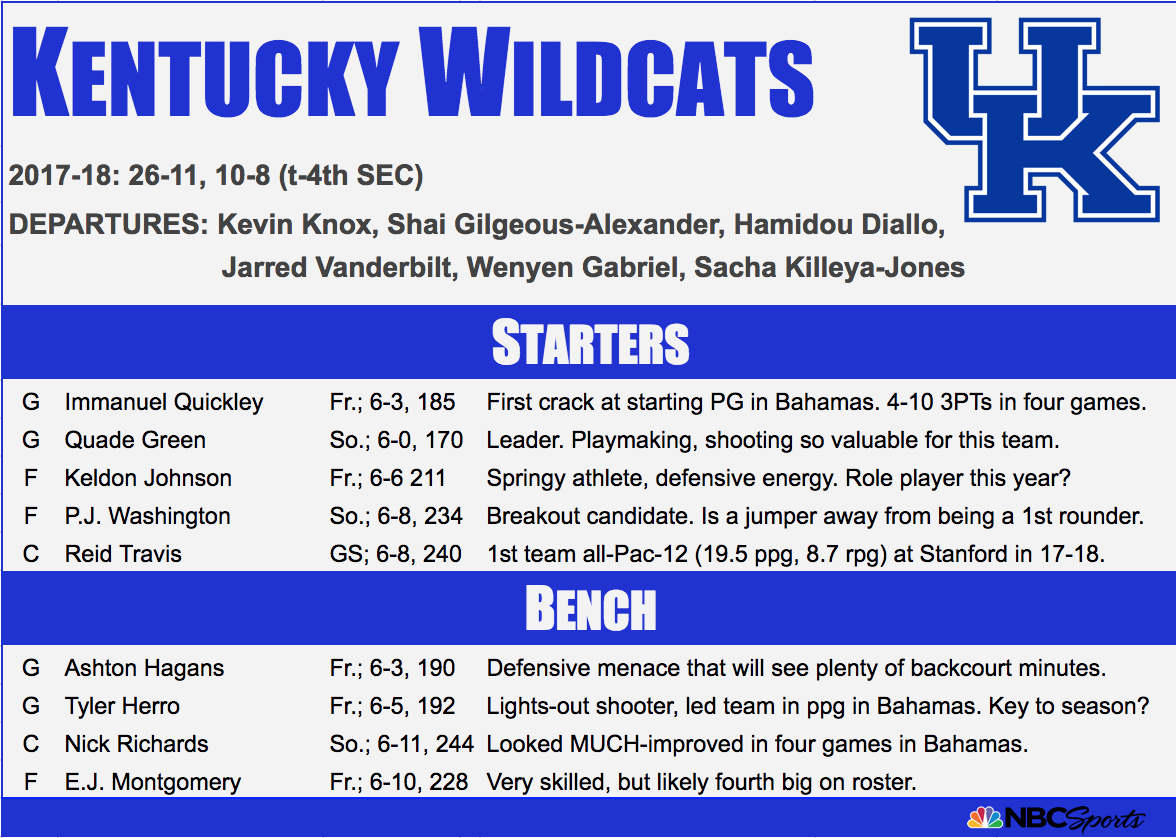 KENTUCKY WILL BE GOOD BECAUSE …

The Wildcats pretty much have the perfect roster build for a college basketball team.

There are nine guys on the roster that are going to be in the rotation — ten if you want to throw in Jemarl Baker — which is more or less the perfect number. There is enough depth that an injury or two won’t be crippling and they can survive foul trouble, but there are enough minutes in a basketball game to ensure that all nine are going to see consistent playing time; one of the tenants of Jay Wright’s Villanova program in recent years is to limit the number of players he has available to him to keep everyone happy with their playing time. That’s worked out pretty well.

And of those nine rotation players, four are bigs and five are guards. Three of their five guards — Quade Green, Ashton Hagans, Immanuel Quickley — are point guards by trade, but all three of them are capable of playing off the ball if they want to use a two-point guard look. They have shooters on the wing — Tyler Herro, Green — as well as a physical athlete in Keldon Johnson that can guard up and let Kentucky play small if they have to.

In the front court, they have a seven-footer that can block shots and catch lobs — the new and improved Nick Richards, who looked terrific in the Bahamas — as well as a trio of power forwards that all have differing skill-sets. Travis is a bruiser on the block that can score in the post and will compete on the glass. P.J. Washington is the best defender and, potentially, the best player on the roster. E.J. Montgomery is probably the most skilled of the group, a smooth face-up four with the most ability on the perimeter.

The team is as balanced as they are versatile. They have guys that can be lockdown defenders and guys that are going to end up being all-conference scorers. They can play big and they can play small.

And perhaps the best part of all of this is that all of these kids can play. Of the nine, I’m not really sure there is a weak link. Richards really struggled as a freshman, but he looked like a different player during Kentucky’s trip to the Bahamas. Montgomery is probably the biggest unknown of the freshman class, but he was a top ten prospect for a reason.

Put another way, you can tell me that just about any combination of these nine kids is going to be Kentucky’s best five this season, and I’d probably believe it. That kind of depth and balance is valuable.

BUT KENTUCKY IS GOING TO STRUGGLE BECAUSE …

The Wildcats are one of four teams in college basketball this season that I think are in a tier of their own: Kansas, Duke, Gonzaga and Kentucky.

Ranking those four teams in any order in the top four of your top 25 can be justified, although for my money Kansas and Kentucky, in that order, are the two best teams in college basketball.

There are a couple reasons that I would take the Jayhawks over the Wildcats.

First of all, I’m worried about just how different Kentucky’s best offensive lineup looks from their best defensive lineup. Ashton Hagans and Keldon Johnson are, without a doubt, the two-best perimeter defenders on this roster. I’d hesitate to call either a liability on the offensive end, but it’s pretty clear they have their limitations at this point in their development, Hagans more than Johnson.

Quade Green and Tyler Herro, on the other hand, are without a doubt the best perimeter scorers on this roster, but they are a liability on the defensive end of the floor.

There are some similar distinctions that we can make in the frontcourt. As good as Reid Travis and P.J. Washington are, I have some concerns that the two of them operate in the same space on the floor. Neither are known for their ability to make perimeter shots — in fact, that’s probably the very reason both are still in school at this point — and that could clog up the lane on a team that will have some shooting concerns again this season.

And yes, those shooting concerns are valid. Kentucky’s best shooters are not good defenders, and vice versa. If you don’t understand why this is a concern, think about the reason ‘3-and-D’ has become entrenched in basketball lexicon in the last decade.

Richards is not the player that either Travis or Washington is at this point in his development, but he’s probably the best fit stylistically to the way Cal wants his five-men to play. He’s a seven-footer than can block shots and spaces the floor vertically in the halfcourt. His guards can throw the ball to the top of the square when they drive and draw help knowing that Richards will be able to finish the lob off with a dunk. I’m not sure the same can be said for the other two bigs.

Then there is Montgomery, who is the most skilled of the four bigs and probably the best NBA prospect even if the impact he has on this Kentucky team this season will probably be the most muted.

But all of that brings me to the biggest issue …

… which is that I have no idea who is going to be Kentucky’s go-to guy this season.

Who is their star? Who is the guy that is going to get the rock at the end of a clock? Who is Coach Cal going to call a play for when he needs a bucket to slow down an opponent’s run? Who is going to have the ball in his hands when a game is on the line?

If I had to hazard a guess today, I think it would be Tyler Herro.

The 6-foot-6 sharpshooter and former Wisconsin commit was the program’s leading scorer during their trip to the Bahamas, and while he’s not the best NBA prospect or the most talented player on the roster, I do think that he is the most polished.

He’s also the guy that can fit perfectly into the role played by Kentucky’s leading scorer in each of the last three seasons: Jamal Murray, Malik Monk and Kevin Knox. Those three guys are all different players, but they were used essentially the same way by Coach Cal. They were run off of screens on the baseline and put into pindown actions in an effort to get them catch-and-shoot opportunities. For Murray and Monk, those shots came from beyond the three-point line. For Knox, they were 12-to-15-foot jumpers. The shots came from different spots on the floor, but the sets they ran weren’t all that much different.

Herro may not be the guy that gets all the hype this season, but I would not be shocked in the slightest if he is the player that gets trusted to take the biggest shots of the season for Coach Cal.

I’m really excited to see how this Kentucky team unfolds this season.

The one thing that Coach Cal does better than just about any other coach in the sport is convince players — talented, NBA-caliber players destined for the NBA draft lottery — to buy into the collective and thrive in the role that will be best for his team.

This season, he has nine guys on his roster that are all more or less at the same level; nine guys that are going to be able to contribute important minutes to a team with national title aspirations; nine guys that, in theory, all have a case to be the starter at their position.

How is he going to make all these pieces fit? How is he going to utilize the skill-set of each of these guys? Will he find a way to unleash the athleticism of Hagans and Johnson while simultaneously allowing us to watch Herro run off screens like his Rip Hamilton? Will Travis be able to bully opponents in the paint without hindering the chances Montgomery has to flash his perimeter skill?

I fully expect Cal to find a way to make it work.

How, exactly, that happens?

I can’t wait to find out.