Today we dive into No. 5 Villanova.

By now, I think everyone on the planet has figured out that last season’s Villanova team was no fluke.

Villanova finished the 2017-18 offense as the most efficient that we have seen in the KenPom era in college hoops. They may just be the best college basketball team in the one-and-done era.

The only loss they took when they were at full strength last season came when Butler beat them in Hinkle Fieldhouse, and even then Villanova lost by eight despite the fact that the Bulldogs shot 15-for-22 from three.

Villanova had four players taken in the first 33 picks of the 2018 NBA Draft. Three went in the first round, and that did not include the 2018 National Player of the Year, Jalen Brunson, who was their lone second round pick.

It also did not include Eric Paschall, who could very well hear his name called in the first round come this June.

And that is where the discussion for this upcoming season starts. 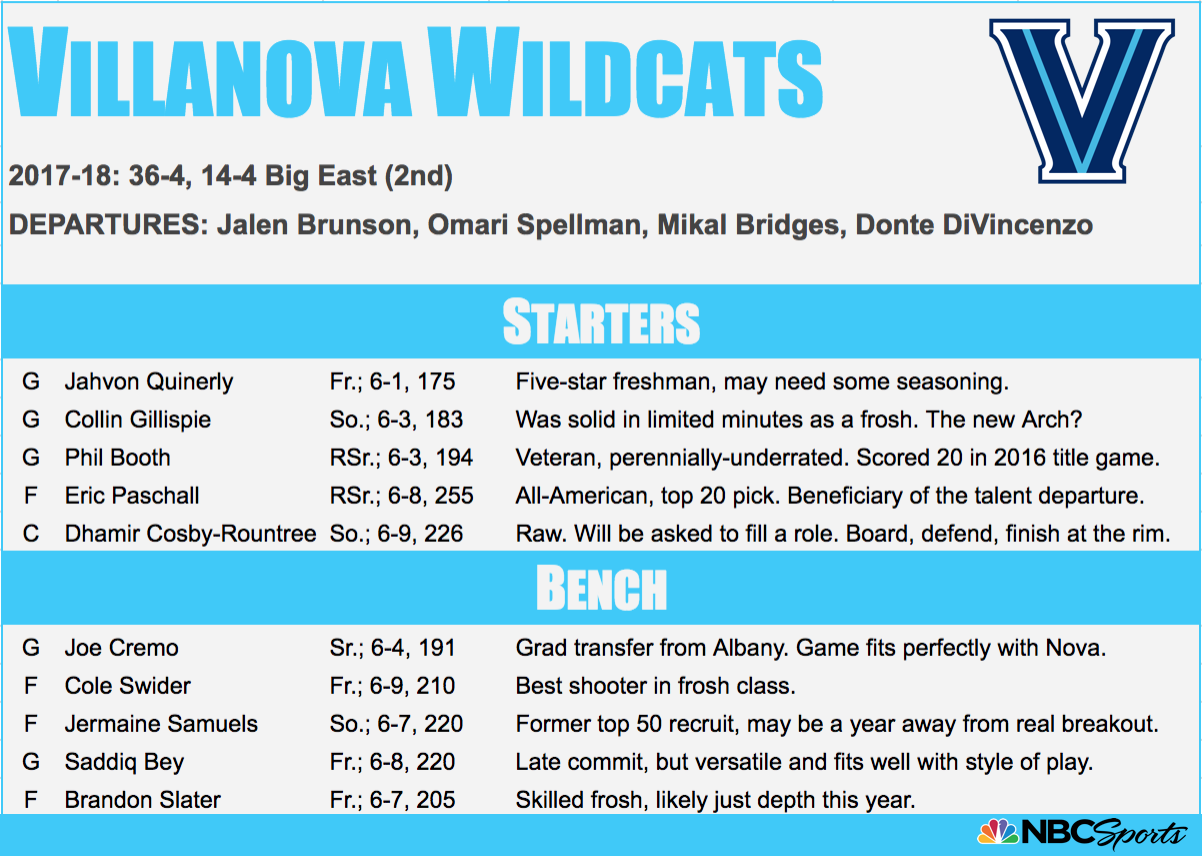 VILLANOVA WILL BE GOOD BECAUSE …

The narrative surrounding Villanova this season is that the Wildcats are too young to compete at the level that we have become accustomed to.

That’s what happens when a team we are used to seeing roll out a lineup that is entirely made up of upper-classmen is staring at a roster that has a majority of freshmen and sophomores.

But what that line of thinking ignores is just how good — and old — the veterans on this team are going to be.

Let’s start with Eric Paschall, a fifth-year senior that many are projecting to put up All-American numbers this year. A potential first round pick, Paschall is a 6-foot-8 athletic freak that shot 46.1 percent from three after a dreadful, 1-for-25 start from distance last season. He scored 24 points in the national semifinals against Kansas and finished the year averaging 10.6 points despite playing on a team with four draft picks on it. He’s won a title, he was a redshirt the year Villanova won the title in 2016 and, as a freshman at Fordham, he averaged 15.9 points.

Long story short: He’s a beast, and he’s ready for his breakout season.

As is Phil Booth, another fifth-year senior for the Wildcats. Booth is a talented combo-guard that has been a critical piece for the Wildcats for half-a-decade. He scored 20 points in the 2016 national title game against North Carolina. He started last season over DiVincenzo. Just this past weekend he put up 41 points on those same Tar Heels in an intrasquad scrimmage between the two programs that have won the last three national titles.

Again, he’s a beast that is ready be the star of this program.

There aren’t two players in the country that are better-suited to provide leadership than those two, and they are doing so in a program that has the best ‘culture’ in all of college basketball. It’s hard for me to wrap my head around the idea that Villanova is going to be too young when those two players are on the roster while Duke — who will start four freshmen — and Kentucky — who is “old” because they landed Reid Travis as a transfer — are consensus top four teams.

At some point, I should probably mention Joe Cremo as well. A grad transfer from Albany, Cremo has won a lot of basketball games in his career and should be a perfect fit for the way Villanova wants to play: He’s a shooter with positional versatility to can make read-and-react plays offensively and attack a closeout.

And while the argument that those other programs are more talented than Villanova do hold some validity, that’s ignoring the fact that the Wildcats are talented in their own right. Jahvon Quinerly is a five-star point guard that should push Collin Gillispie for starters’ minutes. Gillispie himself is a point guard that impressed in his limited minutes as a freshman. Cole Swider, at 6-foot-9, is the best shooter in the 2018 freshmen class and a perfect fit for the way that Villanova wants to play. Both Brandon Slater and Saddiq Bey have the kind of size and versatility that Jay Wright loves; Bey scored 23 points and hit five threes in that scrimmage with UNC.

Then there is Jermaine Samuels, but I’ll get to that in a minute.

BUT VILLANOVA IS GOING TO STRUGGLE BECAUSE …

While I fully believe that this Villanova team is going to outperform expectation, the truth is that there is some guesswork involved here.

We’ve seen Booth and Paschall shine in supporting roles in the past, and we’ve seen Villanova players go from being pieces to stars without a problem in the past, but we won’t know how Paschall and Booth are going to perform as the focal point of an offense until we actually see it.

The same can be said about everyone else in this program.

I think that Gillispie is going to be an impact player as a sophomore, but he was also a three-star recruit coming out of high school that is going to be asked to carry a much, much bigger load this season. Quinerly has all the talent in the world, but he’s also a point guard that is best known for making “Jelly-fam” a movement in New York City. Is he less Jalen Brunson than Skip To My Lou at this point in his career? We won’t know until we see him running Villanova’s offense.

Slater and Bey are promising and precisely the kind of projects that take two or three years to develop until Jay Wright. Swider’s shooting is going to get him on the floor immediately, but will he provide the defensive presence that Villanova is going to demand from? Can Dhamir Cosby-Rountree do what Darryl Reynolds did in 2016-17? How will Cremo adjust to playing in the Big East after starting his career in the America East?

Personally, under Jay Wright’s tutelage, I am just going to assume all of these questions are answered with the best-case scenario, or close to it.

But there certainly is a scenario where the players on this roster just are not yet ready to play the roles they are going to be asked to play.

The one guy that I haven’t really delved into yet is Jermaine Samuels.

A former top 50 prospect that picked Villanova over Duke, Kansas and Indiana, Samuels is an athletic, 6-foot-6 wing that can guard-up or guard-down, make a three-pointer and attack a closeout. He checks all the boxes for the kind of prospect that Wright has turned into an NBA player — from Dante Cunningham and James Bell to Josh Hart, Mikal Bridges and Darrun Hilliard.

I fully expect Samuels to take that leap … at some point, but I do wonder if it is going to come this season. It sounds like Samuels is destined to be more of a role player than he is a star this year, and just how big of a role he is capable of playing is something that can change the way we view this group.

The biggest concern I have for Villanova is going to be on the defensive end of the floor. This group was somewhere between good and really good defensive for much of last year, but they lose some critical pieces from that group. We don’t know how well these freshmen are going to end up being defensively. Gillispie and Cosby-Rountree don’t exactly profile as elite defensive pieces, and while Booth and Paschall should be fine, the strength of Villanova on that end is more due to the collective than it is any brilliant individual defending. If the collective is a group of average or below-average defensive pieces, that’s an issue.

Which is where Samuels comes in.

Outside of Paschall, he probably has the best tools when it comes to playing the multi-positional, versatility-driven style of defense that Wright has thrived with. If he’s capable of giving 20-25 really good minutes this season, it will make Villanova better defensively. If he starts to look like he’s ready to ‘make the leap’, suddenly Villanova is much more dangerous.

At the very least, Villanova once again looks like the overwhelming favorite to win the Big East again after their four-year reign of terror over the conference was snapped last season by Xavier.

But that said more about the Big East than it does about the Wildcats.

What it all comes down to for Villanova is how quickly the underclassmen reach a point where they can play like upperclassmen. How steep is Quinerly’s learning curve at the point? Will Gillispie truly be the new Ryan Arcidiacono? Will Paschall and Booth take the step forward and play like they deserve placement on first-team all-Big East?

I think Villanova has Final Four upset, and I just invested some money in Villanova (+3,000) to win the national title. That’s how bullish I am on them.