Today we dive into No. 6 Nevada.

No one was a bigger winner at the NBA Draft early entry deadline than Nevada.

The Wolf Pack not only brought back both Caleb and Cody Martin, both of whom looked like they were as good as gone, but Jordan Caroline returned to school for his final year of eligibility while Jordan Brown, a 6-foot-11 McDonald’s All-American, announced that he will be playing his college ball for Eric Musselman.

The odds of all of those things happening were so low that the Wolf Pack had already promised their scholarships to other players. Ehab Amin, a transfer from Texas A&M-Corpus Christi, never even made it to campus, while Josh Hall, who hit the shot that sent the Wolf Pack to the Sweet 16 last season, was forced out, transferring to Missouri State.

But that is decidedly good news for Nevada fans, as they will have a chance to watch and root for the best the Mountain West has had to offer since Jimmer and Kawhi were running roughshod over the league seven seasons ago.

The real question for this group is not whether or not they are good enough to deserve a top ten ranking.

They have nine players on their roster that have spent at least three seasons playing college basketball, and the only one of those nine that did not averaged more than 13.2 points the last year they played is Lindsey Drew; he averaged “only” 8.3 points, 4.7 assists and 4.4 boards as Nevada’s starting point guard last season before rupturing his achilles.

That also doesn’t include Brown, a top 15 prospect nationally.

The question is less about whether or not there is enough talent on the roster and more if there are enough minutes available to keep all this talent happy with their role. 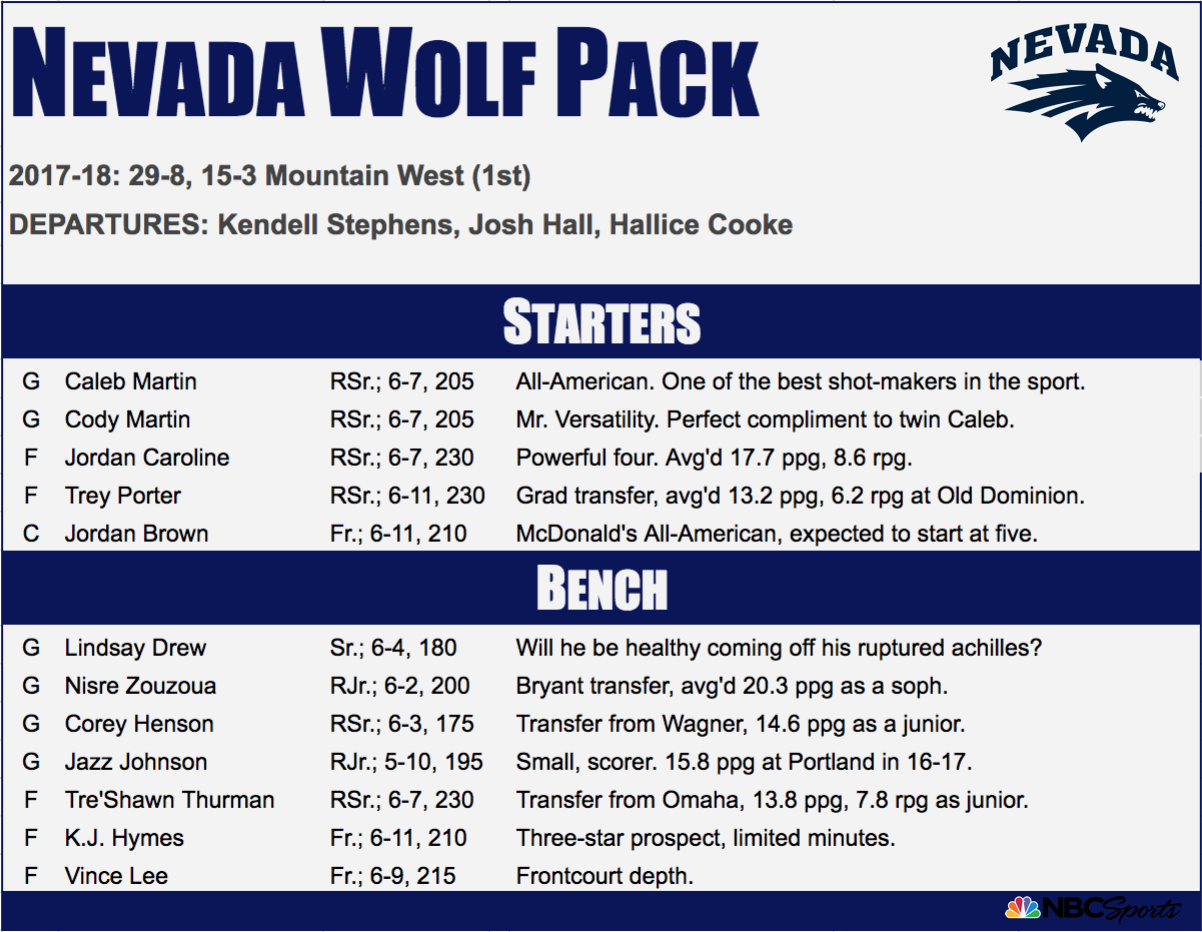 NEVADA WILL BE GOOD BECAUSE …

There is just such a ridiculous amount of talent on this roster.

We need to start with the Martin twins. Caleb is the star. Last season he averaged 18.9 points, 5.4 boards and 2.6 assists while shooting 40.3 percent from three in a year where he spent much of the second half of the season battling a foot injury that was initially thought to require surgery. He is one of the nation’s best shot-makers, even if the shots that he makes tend to be a higher degree of difficulty that would be ideal. His twin brother, Cody, is the more versatile of the two. He averaged 14 points last year, but he also posted 6.0 boards, 4.7 assists, 1.7 steals and 1.5 blocks per night. With Lindsey Drew — the youngest son of former Atlanta Hawks head coach Larry Drew — still working his way back from a ruptured achilles, Cody will likely take on the starting point guard role.

It sounds weird to say this, but Jordan Caroline took a little bit of a backseat to the Martin twins last season even though he himself managed to up his scoring numbers to 17.7 points per game. He’s a threat to go for 25 every time he steps on the floor; as a sophomore, he once put up 45 points and 13 boards in a win at Mexico.

All three of Nevada’s big names are transfers, which should tell you how this roster is made up. They’re far from alone, too: Trey Porter is a grad transfer from Old Dominion that averaged 13.2 points and 6.2 boards last season. Corey Henson, another grad transfer, averaged 14.6 points at Wagner last season. Nisre Zouzoua sat out last season at Nevada after averaging 20.2 points at Bryant in 2016-17. Jazz Johnson (15.8 ppg at Portland) and Tre’Shawn Thurman (13.8 ppg, 7.8 rpg at Omaha) sat with him.

Nevada was one of the nation’s most dangerous teams offensively last season. They had three guys that could put 25 on you on any night, and that certainly isn’t going to change. How many teams in the country can bring four — potentially five, depending on if Drew can get back into the starting lineup — players off the bench that have averaged at least 13.8 points at the Division I level?

(The answer is not a single one.)

The other part of it is that these guys, they’re all old.

And I still haven’t mentioned the starting center for this group, Jordan Brown.

He is an athletic, 6-foot-11 high-flyer that will provide a dynamic to this team that no one else can provide — vertical-spacing, rim protection, work on the offensive glass.

BUT NEVADA IS GOING TO STRUGGLE BECAUSE …

There might actually be too much talent on this roster.

I know how silly that sounds, but there are legitimately 10 guys on this team that deserve to play major minutes and will expect to get shots during those minutes.

But where are those minutes going to come from?

There are 200 minutes available to be played during a college basketball game, and those three account for roughly 90 of them. Nevada’s other two starters averaged roughly 28 minutes last season. Let’s call that 25 this year, meaning that Nevada’s starters will be responsible for 140 of the available 200 minutes. The five guys on the bench would be left with about 12 minutes each.

And that’s before we even broach the subject of who would be getting shots and when.

This is not a unique phenomenon in college hoops. Every coach has to deal with it from time to time, and I’m not sure there is anyone in the country that is better at getting his players to buy into a role than John Calipari at Kentucky. The year he won the national title, Anthony Davis and Michael Kidd-Gilchrist were the fourth and fifth options offensively. In 2015, the year they went 38-1 and made the Final Four, everyone played roughly 20 minutes a night. Karl-Anthony Towns averaged just 10.3 points.

The point isn’t to compare this Nevada team to that Kentucky team.

My point is that Musselman is going to have his work cut out for him getting the players on his roster, many of whom were brought into the program with the expectation of playing the minutes the Martin twins are going to be playing, to buy into their role and the team.

The Wolf Pack, last season, were not a very good defensive team. They finished the year ranked outside the top 100 in KenPom’s adjusted defensive efficiency metric, which was evidenced by the struggles they had stopping two anemic offenses in Texas and Cincinnati in the first two rounds of the tournament.

There were a couple of reasons for those defensive struggles:

In theory, this year’s team should be better on the glass and defending in the paint. Whereas there really wasn’t much size on the roster last year — for the most part, Musselman rolled out small-ball lineups with four or five guys all right around 6-foot-7 — this season Nevada will likely begin the year starting 6-foot-10 Trey Porter and 6-foot-11 Jordan Brown.

But that’s not guarantee. It ignores the benefits that come with putting a team on the floor where everyone is switchable defensively, not to mention limitations offensively that will come with having two big men playing together.

Either way, I think it will be Nevada’s ability on that end that will determine whether we are talking about a team with real national title potential or a highly-ranked team from the Mountain West that will sputter out early in March.

They are the class of their conference, and I would be shocked if they fell out of the top 25 at any point this season.

Part of that is because of how talented the are, but there is also a bit of an issue with their schedule. It’s not bad, per se, but there is a very real chance that the best team they play before the start of the NCAA tournament will be this Sunday’s exhibition with Washington, a contender for the Pac-12 title.

Nevada has road trips to Loyola-Chicago, USC and Utah. They play Arizona State on a neutral, and they host BYU and South Dakota State.

We’ve seen worse, that’s for sure, but with the Mountain West failing to provide them with a fellow top 25 team, I think we’re going to head into Selection Sunday talking about how we have yet to see Nevada prove they deserve the seed that they get.