Today we dive into No. 7 Tennessee.

The Vols were one of the best stories in all of college basketball last season.

They were picked 13th out of 14 teams in the SEC in the preseason. They didn’t have a single player on their roster that was ranked in the top 100 of their recruiting class, according to 247 Sports composite rankings. They were led by a coach in Rick Barnes that not enough people respected and that some believed had taken Tennessee in an effort to land one, last payday before hanging up the clipboard.

And all they did was go out and win a share of the SEC regular season title in a year where the SEC sent eight teams to the NCAA tournament.

Barnes, as you might imagine, was named the SEC Coach of the Year as a result.

Perhaps the best news of all is that the Vols will return essentially everyone from that team. All five starters are back, including SEC Player of the Year Grant Williams. Their sixth-man, who played starters’ minutes and was the third-leading scorer on the team, is back as well. Their bench, which was young and unproved last season, has another year of experience under their belt and adds four-star freshman D.J. Burns, who, while talented, is year another sub-100 prospect.

When it comes down to it, the only real difference between this Tennessee team and last year’s Tennessee team is that this team is going to have to face the full weight of expectation.

The Vols are no longer a secret.

They are the reigning SEC champs, a preseason top ten team and one of, if not the biggest game on the schedule for everyone they are going to face this season.

How the Vols handle that burden will determine just how much success they have this season. 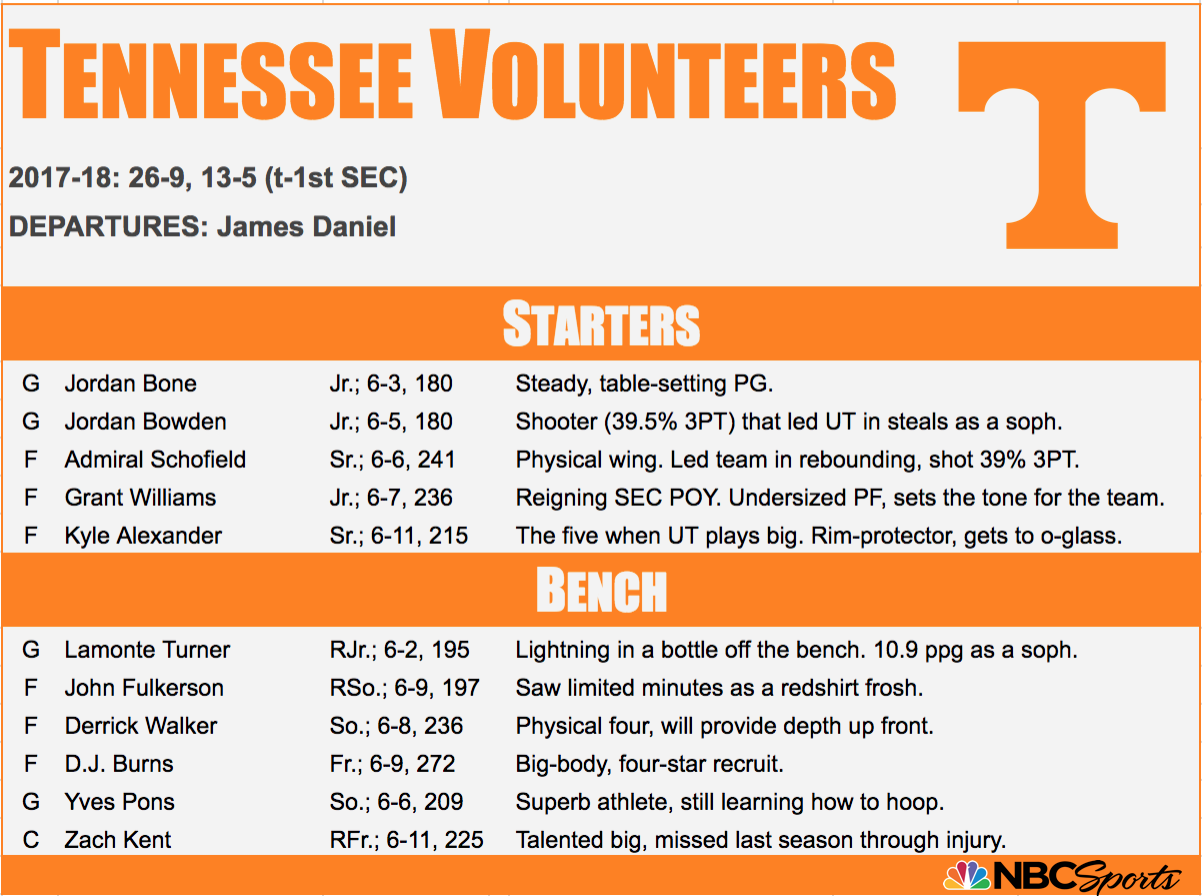 TENNESSEE WILL BE GOOD BECAUSE …

There were really good last year, and they are essentially the same team this year.

It really is going to be that simple with the Vols.

They bring back the SEC Player of the Year in Grant Williams. They bring back the three guards that they featured when they played their small lineup. They bring back Admiral Schofield, who is the physical, no-nonsense wing that can guard-up, rebound the ball and shoot nearly-40 percent from three. Starting center Kyle Alexander is now a senior, and he’ll be pushed for minutes as Rick Barnes added frontcourt depth with the addition of four-star recruit D.J. Burns and the return of Zach Kent. Throw in the fact that Yves Pons, one of the very-best athletes in the SEC regardless of sport, might actually have a better feel of how to be a basketball player this season, and it stands to season that the Vols are going to be just as good, if not better, this year.

I’m not sure how else to put it.

And if anything, the roster additions that Barnes made should help.

Tennessee was one of the best defensive teams in the country last season. They finished sixth-nationally in KenPom’s adjusted defensive efficiency metric, and they did so because they forced a lot of turnovers and were terrific at contesting shots and running teams off the three-point line. Their weakness on that end of the floor was the fact that they allowed their opponents a 31.1 offensive rebounding percentage — 281st nationally — but it would stand to reason adding more size would help here.

Either way, it’s hard to envision a scenario where Tennessee is going to be worse this season than last when thinking strictly about the X’s and O’s of it all …

BUT TENNESSEE IS GOING TO STRUGGLE BECAUSE …

… but basketball isn’t just about the X’s and O’s.

In 2017, Northwestern made the NCAA tournament for the first time in the history of the program. They then won a game in the tournament and, if it wasn’t for a questionable goaltending call and the ensuing technical foul on Chris Collins, the Wildcats might have actually picked off eventual runners-up Gonzaga in the second round.

The following season, Northwestern returned everyone and found themselves ranked in the preseason top 20 before falling off a cliff. The Wildcats finished below .500, losing their final seven games of the season while earmarking what was supposed to be a breakout year for the program with a 6-12 Big Ten record.

“I kind of knew we weren’t ready,” star point guard Bryant McIntosh said at the time. “We weren’t really prepared to play a good team. We weren’t mentally ready. I don’t think we were in shape physically,” while Collins added that the team had lost their edge. “We didn’t have that same hunger,” he said.

Northwestern thought they had made it, they eased up instead of striving to be better and it cost them.

This is precisely what Tennessee needed to avoid this offseason. Complacency and satisfaction is the most dangerous thing that a team like these Vols can face. This is not a group that is going to out-talent anyone at this level. I’m not sure there is an NBA player on the roster. They win games because they work their tails off at all times: Defensively, on the glass, in transition, cutting on offense and, perhaps most importantly, during offseason workouts.

It is not easy to go from being the hunter to the hunted, and Tennessee is going to find that out this year.

I wonder where the Vols can improve individually.

As a team, there is a clear answer to this: They can get better on the defensive glass. The way that their roster is composed and that they execute their defense is always going to leave them liable to giving up second-chance points — this is what happens when you play small and you gamble for steals — but they couldn’t even grab seven out of every ten potential defensive rebounds. That number can get better.

I’m curious which player on this team can take a step forward.

Because it looks like the six rotations players they are bringing back have more or less maxed themselves out.

Williams can become a better three-point shooter. That will help. Turner, Bowden and Bone all shot under 40.3% from two-point range last season. That certainly can improve. Those guards have a tendency to turn the ball over a little too much. That can get better as well.

But those are the margins.

What I’m struggling to see is where a someone can go from being a role player to an all-SEC player. I don’t think they have a breakout star, and to me, that is the difference between Tennessee being considered a top ten team and the Vols being looked at as a real contender to Kentucky in the SEC title race.

If that happens — if, say, Admiral Schofield becomes the best wing in the league — then we may have to start talking about Tennessee as a basketball school.

Outside of the teams in the top four, Tennessee to me has the narrowest gap between their ceiling and their floor of any team in the top 15 or 20 this season.

We know they’re going to be really good because they were really good last season and this is basically the same team. We also know there may not be an NBA player on this roster, and it is not easy to win at the highest level in college hoops without having the kind of talent that can play in the NBA.

What does all that mean?

It’s hard to fathom Tennessee falling out of the top three in the SEC.

It also seems unlikely that Tennessee will be cutting down the nets on the final weekend of the season.