Today we dive into No. 8 Virginia.

In the 2018 NCAA Tournament, Virginia managed to accomplish the one thing that will ensure they will forever be remembered in the annals of history: The Cavaliers, as the No. 1 overall seed, not only managed to find a way to become the first No. 1 seed to ever lose to a No. 16 seed, but they did so while losing by 20 points.

They were run out of the gym in what was just their third loss of the season and their second loss since the first week of December, and we’re never going to forget about it.

History can be unkind when you’re the first to do something no one wants to do.

The question that everyone wants an answer to is simple: How does a team bounce back from that?

And then there was last year.

That kind of streak is tough for any athlete to get out of their head, let alone a group of college kids that are fresh off one of the most embarrassing defeats in the history of sports.

That said, the narrative of being a ‘loser’ only lasts as long as the losing does. The Red Sox were cursed until they weren’t. Same with the Cubs. LeBron wasn’t clutch until he led Cleveland back from a 3-1 deficit against the Warriors. Peyton Manning wasn’t a winner until he won a Super Bowl. Bill Self, Jim Calhoun and Lute Olson couldn’t win the big one until they did. Hell, Villanova has won two of the last three national titles and prior to that, they were Virginia, the team that won a ton of games before getting bounced out early in March.

It is going to happen for UVA.

Will this be the year it finally does? 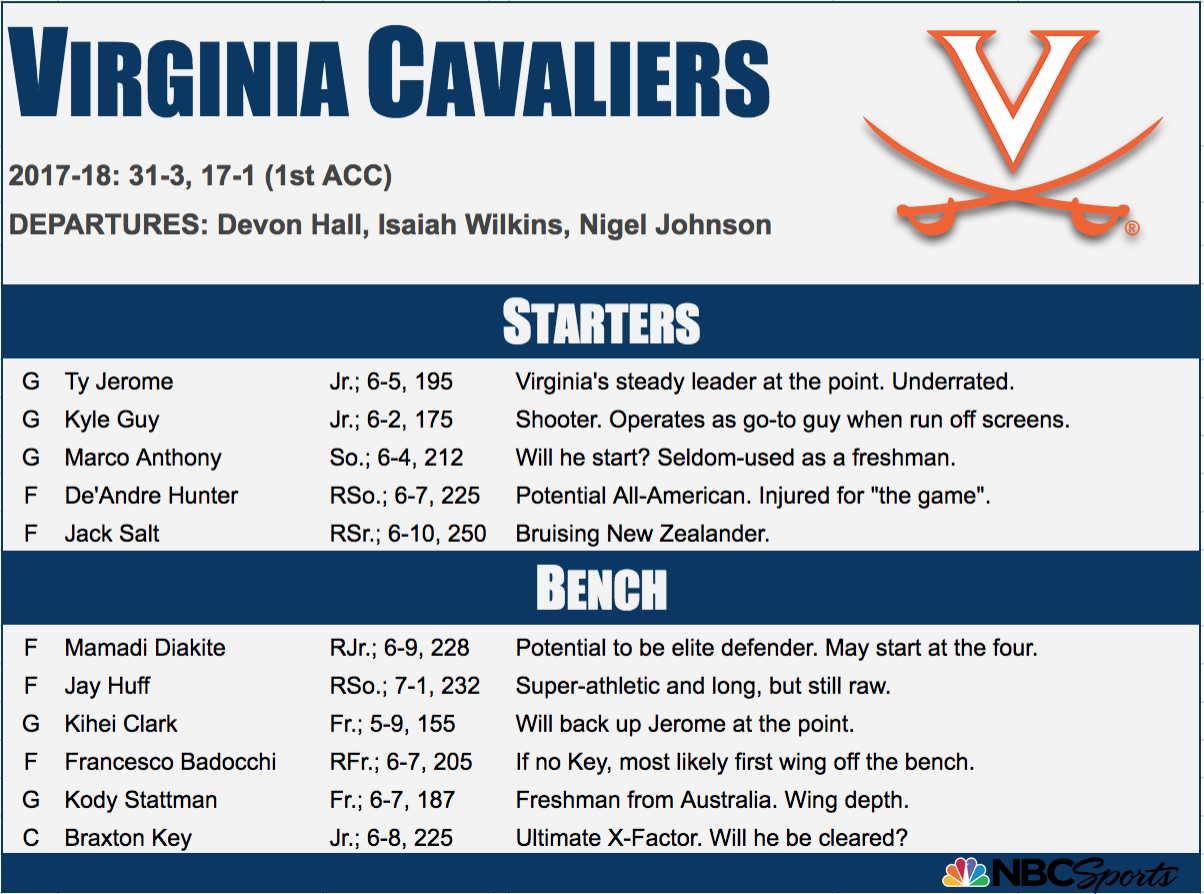 VIRGINIA WILL BE GOOD BECAUSE …

And, in the process, they are going to win a whole bunch of games.

The key is that they aren’t just a system this season. There is talent on this roster. De’Andre Hunter is the biggest name to know. A potential lottery pick and an NBC Sports second-team preseason All-American, Hunter is Virginia’s most versatile defender and the one guy that can really go out and create a bucket for himself. He’s an incredibly important piece to what Virginia wants to do. (More on that in a minute.)

He’s not alone, either. Kyle Guy led Virginia in scoring last season and he will pop up on some preseason All-American lists as well. He’s taken over the role in this offense that was played by Malcolm Brogdon and Joe Harris before him; the sharpshooter that gets run off of screens and who has plays called for him designed to get him open looks from three.

Ty Jerome is also back, and the steady-if-unexciting point guard is one of the best players in the country you aren’t really paying. With his size, defensive instincts, ability to operate in pick-and-rolls and deep, deep range on his jumper, he’s an NBA sleeper as well. Throw in pieces like Mamadi Diakite, Jack Salt and Jay Huff, and there is plenty up front as well.

The issue for this group is not going to be whether or not the players on this roster are good enough.

BUT VIRGINIA IS GOING TO STRUGGLE BECAUSE …

The reason that Virginia lost to UMBC had quite a bit to do with the fact that the Cavaliers were missing De’Andre Hunter for that game; he broke his wrist prior to the start of the NCAA tournament.

Hunter is a 6-foot-7 combo-forward with a 7-foot-1 wingspan. He’s athletic enough to defend down and he’s big and strong enough to defend up. He is the piece that allows Virginia to matchup with teams — like UMBC — who play four guards, and he also skilled enough offensively that he can go out and create a shot for himself, which is not exactly Virginia’s strength offensively.

Against UMBC, Virginia’s bigs were exposed guarding smaller players over and over again, and they weren’t enough of a threat offensively to punish smaller Retriever defenders at the other end. This wasn’t the sole reason that Virginia lost — UMBC played out of their minds, Virginia had an off-night and once the Cavs realized what was going on, they froze up and could never rally playing at their pace — but it was the root cause of what happened in ‘the game’.

The problem this season is that I’m afraid Hunter is going to be forced into playing the majority of his minutes at the three because, quite frankly, Virginia doesn’t have many guards that are actually good. Their perimeter depth as of today consists of a sophomore that played in 13 games last season (Marco Anthony), a redshirt freshman and a pair of true freshmen that are anything-but five-star prospects.

On the other hand, three of their top six players are big men — Salt, Diakite and Huff. Diakite is probably athletic enough that it won’t be a killer defensively if he ends up playing 25 minutes at the four, but it still would be suboptimal for the way that Virginia will need to score.

Which is why the key to Virginia reaching their ceiling …

… is probably the status of Alabama transfer Braxton Key.

Key is a 6-foot-8 junior that spent the first two years of his college career playing for the Crimson Tide. As a freshman, he averaged 12.0 points and 5.7 boards, but he managed just 7.0 points and 5.3 boards in limited time last season after missing the first ten games following knee surgery.

Now, Key has his warts as a player. He’s turnover prone, he’s probably not quite as good of a perimeter shooter as he thinks he is and, like Hunter, he’s more of a combo-forward than he is a natural wing or a true four. But A) he can score, B) the fact that he’s a combo-forward is certainly not a killer given he’d spend time paired with Hunter, and C) there shouldn’t be an adjustment for him defensively. In the two seasons that Key was at Alabama, they finished in the top 20 of KenPom’s adjusted defensive efficiency metric both years.

The NCAA has been more lenient granting these waivers recently. Mustapha Heron at St. John’s was recently cleared to play this season. Key is hoping that he’ll be as lucky, and if he is, I think it changes what the ceiling for this team can end up being. He makes that much more difficult to create mismatches against.

(UPDATE 10/22: Key received a waiver and will be eligible to play this season.)

Virginia is going to be right there in the mix again.

I think they can win the ACC regular season title again. Duke is far from a perfect team and North Carolina will be starting a freshman at the point. Once you get out of the top three in the league, the conference takes a pretty big step down. Put another way, there is a clear-cut tier at the top of the league, and Virginia is a part of that tier.

But their issue has never been winning during the regular season.

Hell, they have won two of the last five ACC tournaments. They can win in a knockout setting.

They just haven’t done it in March yet.

And until they do, until they get to a Final Four and make a run at winning a national title, this is going to be the talking point in regards to this program. We’re never going to forget about ‘the game’, but that doesn’t mean UVA can’t give us something else to talk about, too.